All articles from this author
Takeru Torigoe

A Mn(II)/bipyridine-catalyzed bromination reaction of unactivated aliphatic C(sp3)−H bonds has been developed using N-bromosuccinimide (NBS) as the brominating reagent. The reaction proceeded in moderate-to-good yield, even on a gram scale. The introduced bromine atom can be converted into fluorine and allyl groups.

Organic halides are versatile precursors for various synthetic protocols and are frequently used to introduce a variety of functionalities, such as boron-, silicon-, nitrogen-, and oxygen-based functional groups, and in C−C bond forming reactions, such as cross-coupling reactions [1-6]. The traditional method used for the preparation of alkyl bromides is the reaction of their corresponding alkyl alcohols with HBr, PBr3, or other brominating reagents [7-13].

Direct C–H halogenation is one of the most efficient methods used for the synthesis of halogenated organic molecules. This direct method involves the reaction of an alkane with Br2, CBr4, or H2O2–HBr under photolysis or at high temperatures in the absence of a catalyst (Scheme 1a) [14-16]. However, these reactions do not exhibit any selectivity due to the indiscriminate attack of bromine radicals on the C–H bonds in the substrate, which leads to the formation of a mixture of halogenated products. Electrophilic and radical C(sp3)−H halogenation at the benzylic and allylic position using N-halosuccinimide with azobisisobutyronitrile or benzoyl peroxide as a radical initiator is known as the Wohl–Ziegler bromination reaction, which requires heating, acidic/basic conditions, and/or UV irradiation (Scheme 1a) [17-20].

Manganese is one of the most abundant and nontoxic transition metals found in the earth’s crust and its corresponding complexes and salts are useful in synthetic organic reactions [29-43]. Highly reactive and selective bromination reactions have been achieved using a stoichiometric amount of MnO2 [44] or a catalytic amount of Li2MnO3 [45] under fluorescent light irradiation in the presence of Br2 (Scheme 1d). Hill [46] and Groves [47-49] have reported the manganese-porphyrin-catalyzed chlorination and bromination of C(sp3)−H bonds, respectively (Scheme 1d). Groves et al. also reported the manganese-salen-catalyzed fluorination of benzylic C(sp3)−H bonds [49]. Although these methods are efficient, they have a limited substrate scope (cycloalkanes and substrates bearing a benzylic C–H group). Therefore, there remains room for the development of a simple manganese catalytic system to achieve C(sp3)−H halogenation using commercially available reagents.

Herein, we report a manganese-catalyzed C(sp3)–H bromination reaction at the methine and benzylic positions of a wide range of substrates. The manganese catalyst, brominating agent, and additives are commercially available, and the reaction can be achieved by simply mixing these reagents with the substrate.

The manganese-catalyzed C(sp3)–H bromination reaction proceeded in good yield, even on a gram scale. The reaction was performed using 2.61 g of 1a with NBS and TMSN3 in the presence of a catalytic amount of Mn(OAc)2 and bpy to give 1.98 g of 2a in 58% yield (Scheme 3).

The introduced bromine atom can be converted into other functional groups. The reaction of 2a with selectfluor in MeCN at 25 °C for 12 h gave fluorinated product 3 in 86% yield (Scheme 4, top) [50]. Allylated product 4 was obtained in 64% yield upon treating 2a with allyltributylstannane in the presence of a catalytic amount of AIBN (Scheme 4, bottom) [51].

Table 1 shows that the C(sp3)–H bromination reaction proceeds in the absence of a transition metal salt or bpy ligand, and was accelerated by transition metal salts, especially Mn(OAc)2. In addition, the results also suggest that TMSN3 is required for the C(sp3)–H bromination reaction. The proposed reaction mechanism is shown in Scheme 5, which involves the following steps. (1) The reaction between NBS and TMSN3 generates bromine azide via the elimination of N-(trimethylsilyl)succinimide [52,53]; (2) bromine and azide radicals are then formed via homolytic cleavage of the weak Br–N3 bond in bromine azide [54,55]; (3) the bromine radical can also be generated from NBS with the formation of a succinimide radical; (4) alkyl radical intermediate A is then formed via hydrogen abstraction by the succinimidyl radical and/or azidyl radical [56,57]; (5) the Br–Mn(III) species is then formed from the Mn(II) catalyst and bromine radical; and (6) brominated product 2 formed by the reaction of intermediate A with the Br–Mn(III) species with the regeneration of the Mn(II) catalyst.

In summary, we have successfully developed a manganese-catalyzed bromination of unactivated aliphatic C(sp3)−H bonds. The reaction proceeded selectively at the methine and benzylic positions using simple and commercially available compounds, such as NBS, TMSN3, Mn(OAc)2, and bpy, even on a gram scale. Furthermore, the brominated products can be easily functionalized upon the introduction of other functional groups, such as fluorine and allyl groups. We hope that this C(sp3)–H bromination reaction will become a useful method to synthesize organic compounds with bromine atom(s).

© 2021 Sneh et al.; licensee Beilstein-Institut.
This is an Open Access article under the terms of the Creative Commons Attribution License (https://creativecommons.org/licenses/by/4.0). Please note that the reuse, redistribution and reproduction in particular requires that the author(s) and source are credited and that individual graphics may be subject to special legal provisions.
The license is subject to the Beilstein Journal of Organic Chemistry terms and conditions: (https://www.beilstein-journals.org/bjoc/terms) 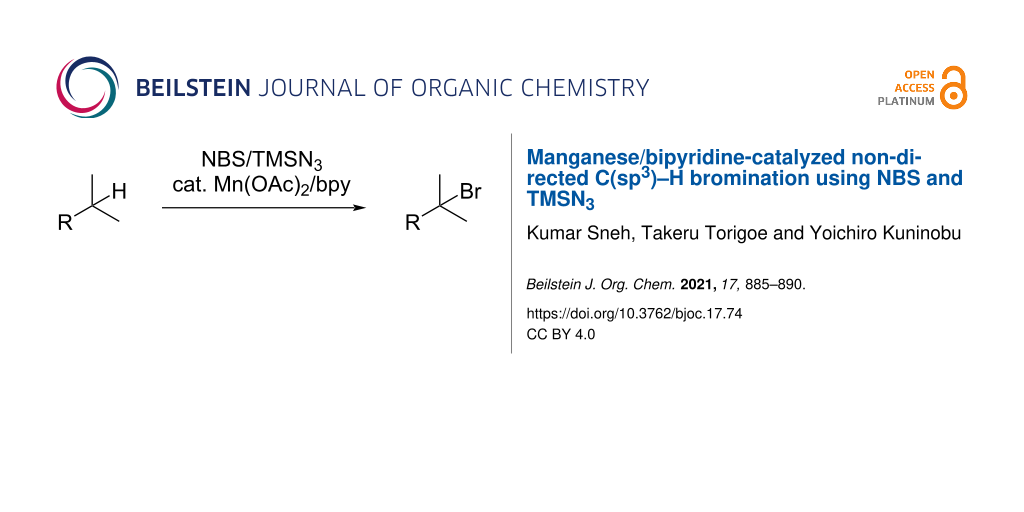