All articles from this author
Swapan Dey


All articles from this author
Wim Dehaen

Several new heterocyclic systems based on a hydroxybenzofuro[2,3-b]pyridine building block were prepared. This benzofuropyridine is easily available from the Meerwein reaction of benzoquinone and a heterocyclic diazonium salt, followed by reduction and cyclization. Electrophilic substitution and further condensations give polycyclic systems, including oxazolo- and chromeno-fused analogues.

The aza analogues of dibenzofuran have been less explored, although they may have significant bioactivity. Introducing nitrogen to the dibenzofuran system is expected to increase the water solubility and potential bioavailability due to enhanced hydrogen bonding. Figure 2 presents a few examples of azadibenzofuran molecules. One example of a biologically active benzofuropyridine is revamilast (7), which has been used in Phase II clinical trials, studying the treatment of asthma and rheumatoid arthritis [19]. Other examples are the hydroxybenzofuro[2,3-b]pyridines 8 with efflux pump inhibitory activity useful in chemotherapy [20,21]. These compounds are presumably multitargeting drugs because of the diverse applications as insulin-like growth factor 1 receptor (IGF-1R) inhibitors [22], selective GSK-3β inhibitors important in Alzheimer's disease [23,24], and cyclin-dependent kinase (CDK) inhibitors [25-27]. Lastly, the aza analogue 9 of previously reported furo[3,2-f]chromene 6 was examined for antimycobacterial activity [28].

This evidence encouraged us to investigate new methodologies for the synthesis of aza analogues of dibenzofuran from commercially available aminochloropyridines. Furthermore, a diverse set of polycyclic derivatives was designed. The procedures towards such polycyclic building blocks include C–H-arylation strategies. In the classical Meerwein reaction, aryldiazonium salts are used as the reagents to couple aryl groups to electron-poor alkenes, and this process is assumed to proceed via a free-radical mechanism [29]. Similar reaction intermediates can be prepared using precursors such as organoboron reagents [30]. However, due to the accessibility, aryldiazonium salts are the reagents of choice. They can be prepared starting from the commercially available corresponding anilines. The present work focuses on a metal-free approach for the synthesis of benzofuropyridine analogues.

The synthesis of target compound 13 involved three steps (Scheme 1). C–H Arylation, as needed in the first step, is usually carried out using transition metal catalysis [31]. Furthermore, various metal-based approaches for arylation of quinone involving electrochemical [32], oxidative [33], and photochemical methods [34-36] are also available in the literature [37]. Langer and co-workers reported the synthesis of benzofuropyridines based on a domino reaction of 3-chlorochromones with aminoheterocycles [38]. Alternatively, the classical Meerwein reaction can be applied starting from 3-amino-2-chloropyridine (10), which was transformed into the diazonium salt and coupled in situ with 1,4-benzoquinone, forming arylated quinone 11 without an additional reducing agent [39]. The quinone was reduced to hydroquinone 12 with N,N-diethylhydroxylamine (N,N-DEHA) and cyclized via intramolecular nucleophilic aromatic substitution to isolate 6-hydroxybenzofuro[2,3-b]pyridine (13) with 82% yield. Conveniently, the synthesis of 13 was achieved in a one-pot reaction from 11 with no significant differences in the yield. To the best of our knowledge, this is the first procedure toward compound 13, without additional substituents on the pyridine ring. Furthermore, this method is complementary to the most common routes towards the biologically active 1-aza-9-oxafluorenes [20-26].

To expand the library of derivatives containing core structure 13, electrophilic aromatic substitution of this compound was explored (Scheme 2). Nitration of 13 using 70% nitric acid in glacial acetic acid gave the corresponding regioisomers 14 and 15 in 53% and 41% isolated yield, respectively. The 1H NMR spectrum of 15 showed two apparent singlets separately at δH 7.86 and δH 8.35, which confirmed that the hydrogen atoms of the phenol ring had a para-relationship. The 1H NMR spectrum of compound 14 was similar to that of compound 15 concerning the pyridine part. However, two separate doublet signals appeared at δH 7.98 (d, J = 9.1 Hz, 1H) and δH 7.35 (d, J = 9.0 Hz, 1H) indicating an ortho-relationship between the hydrogen atoms positioned on the phenolic ring.

Several methods of formylation of 13 were attempted, e.g., Vilsmeier formylation, where only the unstable formate ester was formed. Following the Duff formylation procedure, only traces of aldehyde 16 were detected. Rieche formylation with either SnCl4 or TiCl4 resulted in a low conversion of the starting material and only traces of 16 due to the limited solubility of 13 in DCM, DCE, or chloroform. Furthermore, 16 was isolated after a Reimer–Tiemann formylation; however, only in 13% yield. Finally, Casnati–Skattebøl formylation of 13 using MgCl2, iPr2EtN, and paraformaldehyde, i.e., (CH2O)n, has been successful in regioselectively affording aldehyde 16 in a reasonable yield of 39%. The regioselectivity of compound 16 was confirmed by 1H NMR spectroscopy, which indicated the presence of two doublets at δH 7.88 (d, J = 9 Hz, 1H) and δH 7.19 (d, J = 8.9 Hz, 1H), corresponding to the two adjacent hydrogen atoms of the phenolic ring. One singlet was observed at δH 10.58, evidencing the aldehyde proton. This access to previously unknown compounds 14–16 opens many synthetic possibilities for the preparation of novel fused derivatives of 1-aza-9-oxafluorene.

The nitro compounds 14 and 15 were reduced to the corresponding aniline derivatives using hydrogen and Pd/C as a catalyst. The resulting aminophenols 17 and 18 were further converted to novel oxazole-fused derivatives 19 and 20, respectively, by condensation with benzaldehyde and subsequent 2,3-dichloro-5.6-dicyano-p-benzoquinone (DDQ)-mediated oxidation (Scheme 3).

Aldehyde building block 16 was a versatile starting material for further cyclization reactions. Synthesis of nitrochromenobenzofuropyridine 21 was achieved after treatment of 16 with nitrostyrene in the presence of DABCO applying our previously reported ball milling procedure [40]. The synthesis of 22 was performed using the Perkin reaction [41]. The reaction of 16 with propionic anhydride and the corresponding sodium salt in the presence of a catalytic amount of piperidine afforded pyridopsoralen 22 in 46% yield. Analogously, pyridopsoralen 23 was prepared from 16 by Knoevenagel condensation with diethyl malonate and subsequent lactonization with 62% yield (Scheme 4) [13]. To the best of our understanding, the scaffolds 21–23 are novel and may have a potential medicinal interest.

In conclusion, we have successfully synthesized hydroxy-substituted pyridobenzofuran 13. Furthermore, nitration of 13 yielded two regioisomers, 14 and 15, which were further converted to oxazoles 19 and 20. Formylation of 13 was regioselective in forming 16, which is a valuable building block for various condensation reactions to yield a diverse set of products, such as polycyclic fused nitrochromenes 21 as well as pyridopsoralens 22 and 23. All these novel scaffolds are interesting structures with potential medicinal applications, and we plan to expand this chemistry and carry out a bioactivity study in due course.

We thank the KU Leuven for financial support. KU Leuven (Project C14/19/78). R. S. thanks IIT (ISM) Dhanbad for a graduate fellowship. Mass spectrometry was made possible by the support of the Hercules Foundation of the Flemish Government (grant 20100225-7).

© 2021 Singh et al.; licensee Beilstein-Institut.
This is an Open Access article under the terms of the Creative Commons Attribution License (https://creativecommons.org/licenses/by/4.0). Please note that the reuse, redistribution and reproduction in particular requires that the author(s) and source are credited and that individual graphics may be subject to special legal provisions.
The license is subject to the Beilstein Journal of Organic Chemistry terms and conditions: (https://www.beilstein-journals.org/bjoc/terms) 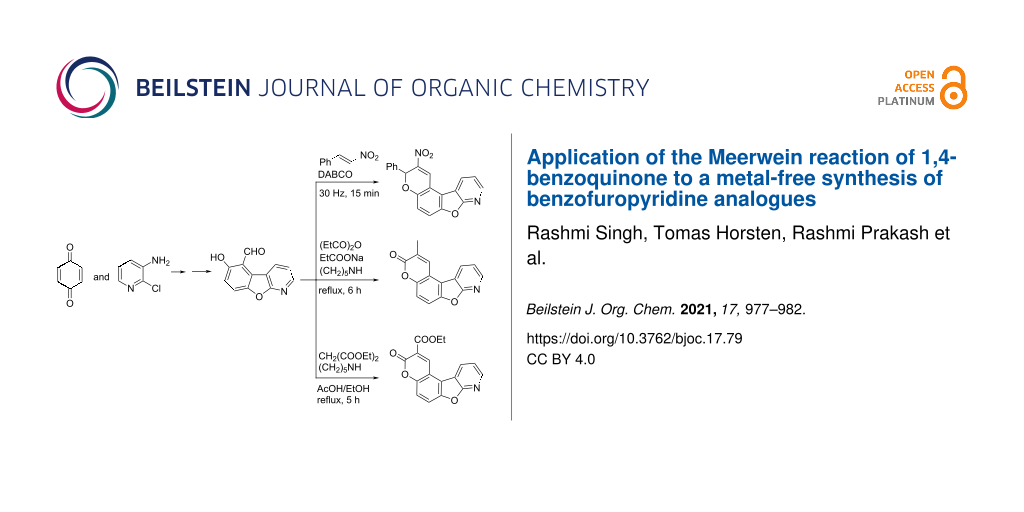