All articles from this author
Hidetoshi Matsuno

Electrochemical Friedel–Crafts-type amidomethylation was successfully carried out by a novel electrochemical oxidation system using a quasi-divided cell and trialkylammonium tetrafluoroborates, such as iPr2NHEtBF4. Constant current electrolysis of 1,3,5-trimethoxybenzene or indoles in DMA containing 0.1 M iPr2NHEtBF4 using an undivided cell equipped with a Pt plate cathode and a Pt wire anode (a quasi-divided cell) resulted in selective formation of N-acyliminium ions of DMA at the anode, which reacted with arenes to give the corresponding amidomethylated products in good to high yields.

We chose 1,3,5-trimethoxybenzene (1) as a model substrate for electrochemical Friedel–Crafts-type amidomethylation. For electrolysis, a test tube-like undivided cell equipped with a Pt plate cathode (2 × 2 cm2) and a Pt wire anode (2 cm × 1 mm Ø) was used. Electrolysis of an N,N-dimethylacetamide (DMA) solution of 1 containing 0.1 M Bu4NBF4 as a supporting electrolyte, trifluoroacetic acid (TFA, 1 equiv) as a proton source for the cathodic reduction, and iPr2NEt (1 equiv) as a base for the formation of N-acyliminium ions of DMA at the anode was carried out under constant current conditions (20 mA/cm2) with 3 F/mol of electricity at 0 °C. It was found that 66% of 1 remained unchanged and mono-amidomethylation product 2 was formed in 16% yield along with 6% of di-substituted product 3 by analysis of the 1H NMR spectrum of the crude product mixture using 1,4-dinitrobenzene as an internal standard (Table 1, entry 1). These results indicate that anodic oxidation of not the substrate 1 but DMA successfully proceeded at the anode. In other words, N-acyliminium ions of DMA would expectedly be formed. We speculated that the reason for the lower product yields of 2 and 3 was a side reaction of the produced N-acyliminium ions with other nucleophiles in the reaction medium. The most likely nucleophile in this reaction medium was the trifluoroacetate ion, which was produced by electrochemical reduction of TFA at the cathode, although we could not detect the coupling product of trifluoroacetate and the corresponding N-acyliminium ion due to the high solubility in water. In addition to TFA, iPr2NEt was also included in this reaction medium, and they probably formed the corresponding ammonium trifluoroacetate in the reaction medium. The thus-generated trifluoroacetate ion could also react with N-acyliminium ions of DMA. Therefore, to avoid the reaction of the cathodic product with N-acyliminium ions, a proton source for which the conjugate base has no nucleophilicity would be necessary in the cathodic reduction. After several attempts, we finally reached HBF4·OEt2 as a proton source for cathodic reduction and the result is shown in entry 2 of Table 1. Strong increases of conversion of 1 and yield of 2 were observed. These results indicate that DMA was selectively oxidized at the anode to generate the corresponding N-acyliminium ions, which were trapped by trifluoroacetate ions preventing the desired amidomethylation in the presence of TFA. The exchange of the proton source from TFA to HBF4·OEt, for which the conjugate base has no nucleophilicity, improved the yield of 2 and the conversion of 1.

aDetermined by 1H NMR using 1,4-dinitrobenzene as an internal standard.

Incidentally, this reaction medium includes a base, iPr2NEt, that would accelerate the deprotonation step in the formation of N-acyliminium ions from DMA at the anode. TFA and HBF4·OEt2 will react with iPr2NEt in the reaction medium to form the corresponding ammonium salt. We thought that if trialkylammonium tetrafluoroborate, R3NHBF4, would be usable not only as a proton source for cathodic reduction but also as a supporting electrolyte, a novel and innovative electrochemical oxidation system could be developed. The use of R3NHBF4 in the electrochemical reaction as a supporting electrolyte and a proton source was investigated and the results are summarized in Table 2.

aDetermined by 1H NMR using 1,4-dinitrobenzene as an internal standard.

When electrolysis of 1 in DMA was carried out in the presence of 0.1 M Bu3NHBF4 without any other supporting electrolyte using a quasi-divided cell, the desired amidomethylation took place efficiently to give 2 in 62% 1H NMR yield along with 3 (Table 2, entry 1). The use of Et3NHBF4 instead of Bu3NHBF4 gave a similar result (Table 2, entry 2). A slight increase in the yield of 2 was observed when electrolysis of 1 was carried out using Et3NHBF4 at −10 °C (Table 2, entry 3). Instead of Et3NHBF4, sterically more hindered iPr2NHEtBF4 was effective for the electrochemical synthesis to give the desired compound 2 in the highest yield, 72% by 1H NMR (Table 2, entry 4). These results strongly indicate that trialkylammonium salts, R3NHBF4, can play roles not only as a proton source but also as supporting electrolyte in the electrochemical oxidation system using a quasi-divided cell. With these results in hand, we moved to screening of electrolysis conditions and the results are summarized in Table 3.

Electrochemical Friedel–Crafts-type amidoalkylation also took place efficiently with a lower concentration (0.05 M) of the supporting electrolyte iPr2NHEtBF4, to give 2 in good yields under various electrolysis conditions (Table 3, entries 1–6). After several attempts in screening of current density (Table 3, entries 1–3), electricity (Table 3, entries 2 and 4–6), and the effect of concentration of the supporting electrolyte, the best result was obtained by a constant current electrolysis of 1 in DMA containing 0.05 or 0.1 M iPr2NHEtBF4 with 4 F/mol of electricity at −10 °C to yield amidomethylation product 2 in 79% 1H NMR yield (Table 3, entries 4 and 8) and 71% isolated yield (Table 3, entry 8). The use of a Pt plate (2 × 2 cm2) instead of a Pt wire as the anode resulted in a drastic decrease in the yield of 2 (Table 3, entry 9). These results indicate that a Pt wire anode plays an important role and that the use of a Pt wire as an anode is critical and essential in the present electrochemical amidomethylation.

It was found that DMF instead of DMA was also applicable to the present electrochemical amidomethylation. Similar electrolysis of 4a in DMF containing 0.1 M iPr2NHEtBF4 using a quasi-divided cell gave 3-amidomethylated N-methylindole 9 in 47% 1H NMR yield and 44% isolated yield at full conversion (Scheme 4). The moderate yield of 9 is thought to be due to its high solubility in water.

A probable reaction pathway is shown in Scheme 5. The present amidomethylation is induced by electrolysis using a quasi-divided cell equipped with a Pt plate cathode (2 × 2 cm2) and a Pt wire anode (2 cm × 1 mm Ø) in DMA containing 0.1 M iPr2NHEtBF4. At the cathode, electrochemical reduction of a proton in iPr2NHEt+ takes place to generate hydrogen gas and iPr2NEt. Evolution of a gas at the cathode can be observed visually. It is well known that electrochemical reduction can generate the intermediates/products which play as bases. Thus-generated bases are called electrogenerated bases (EGBs) and have widely been used in electroorganic synthesis [30-35]. At the anode, electrochemical one-electron oxidation of the solvent, DMA, takes place selectively. Deprotonation, probably supported by iPr2NEt generated at the cathode, followed by further one-electron oxidation generates the corresponding N-acyliminium ion of DMA. Deprotonation supported by iPr2NEt produces iPr2NHEt+, which is used again as a proton source and a supporting electrolyte. In a quasi-divided cell, two electrodes have largely different surface areas. Current density, 20 mA/cm2, is realized at a Pt plate cathode. On the other hand, the anode is a Pt wire, which has a significantly smaller surface area, and a much higher current density is realized. At the anode with a much higher current density, the concentrations of the starting material, iPr2NEt, and the products, which seem to be more easily oxidized, are relatively low and there is insufficient mass transfer at the anode that results in selective oxidation of the solvent, DMA, which is the substance with the largest amount at the anode [28,29].

We have developed a novel electrochemical oxidation system using a quasi-divided cell and trialkylammonium tetrafluoroborates, especially iPr2NHEtBF4, both as a supporting electrolyte and as a proton source for the cathodic reduction. The system was successfully applied to Friedel–Crafts-type electrochemical amidoalkylation of arenes, such as 1,3,5-trimethoxybenzene and indoles, to yield the corresponding amidomethylated products in good to high yields. The novel electrochemical oxidation system will be promising as a powerful tool for electroorganic synthesis using anodic oxidation. In addition, trialkylammonium salts have high potential both as novel supporting electrolytes and proton sources for cathodic reduction in the anodic oxidation process.

© 2022 Senboku et al.; licensee Beilstein-Institut.
This is an open access article licensed under the terms of the Beilstein-Institut Open Access License Agreement (https://www.beilstein-journals.org/bjoc/terms), which is identical to the Creative Commons Attribution 4.0 International License (https://creativecommons.org/licenses/by/4.0). The reuse of material under this license requires that the author(s), source and license are credited. Third-party material in this article could be subject to other licenses (typically indicated in the credit line), and in this case, users are required to obtain permission from the license holder to reuse the material. 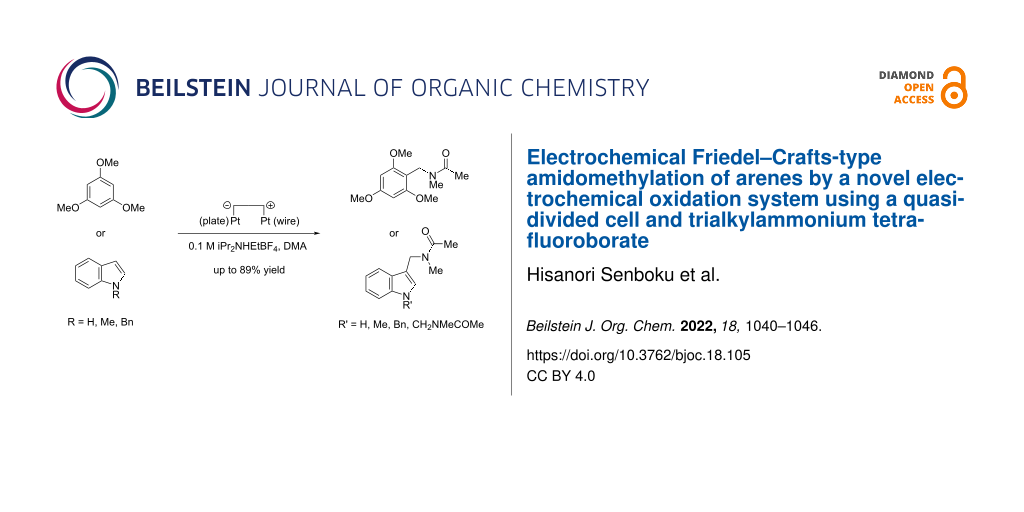