All articles from this author
Claudio Martin Pereira de Pereira


All articles from this author
Sidnei Moura


All articles from this author
Cristiane Storck Schwalm

The broad application of 1H-indazoles has prompted the development of several approaches for the synthesis of such compounds, including metal-free, palladium-, or copper-promoted intramolecular N-arylation of in situ-generated or isolated o-haloarylhydrazones. Such methods mainly start from o-bromo derivatives due to the better yield observed when compared to those obtained from o-chloroarylhydrazones. However, the o-chloroarylaldehydes and o-chloroarylketones used to prepare the arylhydrazones are more commercially available and less expensive than brominated analogs. Seeking to cover a lack in the literature, this work reports a convenient protocol for the synthesis of N-phenyl- and N-thiazolyl-1H-indazoles by copper-catalyzed intramolecular N-arylation of o-chlorinated arylhydrazones. Therefore, a series of seven N-phenyl derivatives and a series of six novel N-thiazolyl derivatives was obtained in 10–70% and 12–35% yield, respectively, after stirring the o-chlorinated arylhydrazones, CuI, KOH, and 1,10-phenantroline for 12–48 hours in DMF at 120 °C. The products were isolated by column chromatography on silica gel. All products were fully characterized by HRMS as well as 1H and 13C NMR spectroscopy. Thus, this approach is valuable for promoting the synthesis of N-phenyl-1H-indazoles in a higher yield than that reported in the literature using copper catalysis and the same substrates. This study also prompted the first reported synthesis of pharmacologically interesting N-thiazolyl derivatives.

1H-Indazoles are important scaffolds due to the prevalence in compounds with biological activity [1], such as anticancer [2], anti-HIV [3], anti-inflammatory [4], antiprotozoal [5], antifungal [6], antibacterial [7], antiplatelet [8], and antihypertensive [9] properties. The relevance to medicinal chemistry is also demonstrated by the presence of the 1H-indazole core in the structure of drugs. The anticataract agent bendazac [10], the anti-inflammatory agent benzydamine [11], and the antiemetic agent granisetron [12] are commercially available examples.

In view of the abovementioned interest, an increasing number of approaches for the synthesis of 1H-indazoles has been recently reported, including 1,3-dipolar cycloaddition reaction of α-diazomethylphosphonates with o-(trimethylsilyl)phenyl triflate in the presence of CsF [13], Cu2+-mediated N−N bond formation from ketimines in the presence of oxygen [14], Pd2+-mediated oxidative benzannulation from pyrazoles and internal alkynes [15], Pd-catalyzed Aza–Nenitzescu reaction of hydrazones and p-benzoquinones [16], and Co3+/Cu2+-catalyzed C−N/N−N coupling of imidates with anthranils as both aminating reagents and organic oxidants [17]. Additional established routes to 1H-indazoles comprise transition metal‐catalyzed [18-20] and metal-free [21,22] intramolecular amination by oxidative C−H bond functionalizations. These methods showed significant improvement with respect to the substrate scope and reaction conditions. However, mostly they are restricted to substrates containing hydrogen [13,14], alkyl [14,15], or (substituted) phenyl moieties [14,16,17] as N‐substituents, and others suffer from poor regioselectivity for substrates without a directing group [18,19,21,22]. On the other hand, methods based on metal-free [23], palladium- [24,25], and copper-promoted [26-31] intramolecular N-arylation of in situ-generated or isolated o-haloarylhydrazones are advantageous concerning regioselectivity. However, they also present limitations, such as costly Pd catalysts, a scope of the N-substituent limited to alkyl [30], (substituted) phenyl [23-29], and tosyl moieties [31], and low to moderate yield when o-chloroarylaldehydes or o-chloroarylketones are the starting material [27,28]. The preference for the use of o-bromo analogues is due to to the better yield obtained compared to using o-chloroarylhydrazones. However, the availability of commercial o-chloroarylaldehydes and o-chloroaryl ketones is greater than that of brominated analogs, and the cost of the former is significantly advantageous, even when the lower yield is considered.

Since the cost and availability of the starting material are crucial issues during the synthetic planning, we envisioned that it would be possible to employ o-chlorobenzaldehydes as starting material for the synthesis of N-phenyl-1H-indazoles if the reaction conditions are carefully chosen. In addition, another target of the work was the application of the optimized reaction conditions to the cyclization of thiazolylhydrazones, aiming for the synthesis of novel N-thiazolyl-1H-indazoles.

In order to compare the efficiency of the optimized conditions with the one-pot approach, a reaction was carried out starting from o-chlorobenzaldehyde and phenylhydrazine under the conditions shown in Table 1, entry 3 (Scheme 1). In the 1H NMR spectrum of the crude reaction mixture, only 3% of the desired product 2a was detected, together with an undefined amount of the intermediate hydrazone 1a (Figures S5 and S6, Supporting Information File 1).

Aiming to expand the scope of 1H-indazoles synthetized by copper-catalyzed intramolecular N-arylation of arylhydrazones, which was limited to derivatives with alkyl, (substituted) phenyl, and tosyl N-substituents, as detailed in the Introduction section, the same conditions were applied to convert N-thiazolyl-substituted arylhydrazones 3a–h to the corresponding N-thiazolyl-1H-indazoles 4a–h. Unfortunately, the conditions were not suitable to convert arylhydrazones containing an electron-donating group at the 3-position, such as Me in 3b and OMe in 3c. In general, the yield was lower than for the products in the N-phenyl-1H-indazole series. The structure of the starting materials impacted the yield of the products in a similar manner as observed for the previous series. Products 4a and 4h were obtained with the best yield of 35% and 34%, respectively. The yield of products 4d–g ranged from 12–24%. Table 3 shows the structures of the starting materials and products as well as the reaction conditions and yields.

A novel set of conditions to convert o-chlorinated arylhydrazones into 1H-indazoles by a copper-catalyzed intramolecular N-arylation approach has been determined. A series of seven N-phenyl-1H-indazoles was obtained in 10–70% yield. Although this yield is lower than that reached using o-brominated arylhydrazones by methods described in the literature, they surpass the yield obtained from the same substrates using copper catalysis. This approach also prompted the synthesis of six novel and interesting N-thiazolyl-1H-indazoles in 12–35% yield. Despite the lower yield, this is the first reported method for the preparation of such compounds. In summary, N-phenyl- and N-thiazolyl-1H-indazoles were conveniently obtained from the less expensive and more available o-chlorinated arylhydrazones.

All chemicals were purchased from Sigma-Aldrich or Oakwood Chemicals and were used as supplied without further purification. The solvents were purchased from Synth. DMF was distilled over 4 Å molecular sieves and degassed by sparging with nitrogen for 30 min before use. Reactions for the synthesis of 1H-indazoles were performed in a resealable screw-cap Schlenk flask (≈10 mL volume) in the presence of a Teflon-coated magnetic stirring bar. TLC analyses were performed with Al plates covered with silica gel (SiliCycle, F254) and visualized by UV detection. Silica gel (Vetec, 0.063–0.200 mm, 70–230 mesh) was used for column chromatography. Melting points were determined with a PMF-II MS Tecnopon melting point apparatus using open capillaries. 1H (300 or 500 MHz) and 13C (75 or 126 MHz) NMR spectra were recorded at 25 °C with a Bruker Avance III HD or Ascend 500 spectrometer, respectively. The samples were dissolved in CDCl3/TMS or DMSO-d6. Chemical shifts (δ) were recorded in ppm. 1H NMR spectra recorded in CDCl3/TMS were calibrated using the TMS peak, and those recorded in DMSO-d6 were calibrated using the DMSO-d5 peak. 13C NMR spectra recorded in CDCl3/TMS and DMSO-d6 were calibrated using the CDCl3 and DMSO-d6 peak, respectively. The determination of the amount of product and/or starting material in the crude mixture by 1H NMR spectroscopy was conducted by adding 1 equiv of trichloroethylene as calibration compound after diluting the crude mixture in CDCl3. The amounts were estimated by comparing the integral value of the product C3–H signal at 8.21 ppm and the hydrazone triplet at 6.89 ppm, respectively, vs the integral value of the calibration compound singlet at 6.46 ppm (see Supporting Information File 1). HRMS spectra were acquired on a hybrid high-resolution and high-accuracy microTof (Q-TOF, Bruker Scientific) spectrometer with electrospray ionization (ESI) source (MicrOTOF-QII, Bruker Scientific) in positive mode. The compounds were individually dissolved in a solution of 50% chromatographic grade MeCN and 50% deionized H2O + 0.1% formic acid.

General experimental procedure for the synthesis of hydrazones 1a–i

In a 100 mL round-bottom flask, the o-chlorinated aromatic aldehyde (5 mmol) and phenylhydrazine (0.540 g, 5 mmol) were dissolved in methanol (25 mL). Glacial acetic acid (0.060 g, 20 mol %) and sodium acetate (0.082 g, 20 mol %) were added, and the solution was stirred for 4 h at room temperature. The resulting mixture was cooled in an ice bath and cold water (30 mL) was added to give a precipitate. In a Büchner funnel, the solid was filtered off and washed with an additional amount of cold water. After drying the solid in a desiccator, it was recrystallized from methanol/water 1:1 to give the products 1a–i with good purity. The identity of the compounds 1a–i was confirmed by HRMS analysis (see Supporting Information File 1).

General experimental procedure for the synthesis of hydrazones 3a–i

The o-chlorinated aromatic aldehyde (1.5 mmol), thiosemicarbazide (0.136 g, 1.5 mmol), 2-bromoacetophenone (0.298 g, 1.5 mmol), and absolute ethanol (2 mL) were added to a 10 mL round bottom flask. The mixture was stirred at room temperature for 5–10 min. The solid was filtered off, washed with ethyl ether, and dried in a desiccator to give the product 3a–i with adequate purity to be used without further purification. The identity of the compounds 3a–i was confirmed by HRMS analysis (see Supporting Information File 1).

A straightforward conversion of 1,4-quinones into polycyclic pyrazoles via [3 + 2]-cycloaddition with fluorinated nitrile imines

© 2022 Barbosa et al.; licensee Beilstein-Institut.
This is an open access article licensed under the terms of the Beilstein-Institut Open Access License Agreement (https://www.beilstein-journals.org/bjoc/terms), which is identical to the Creative Commons Attribution 4.0 International License (https://creativecommons.org/licenses/by/4.0). The reuse of material under this license requires that the author(s), source and license are credited. Third-party material in this article could be subject to other licenses (typically indicated in the credit line), and in this case, users are required to obtain permission from the license holder to reuse the material. 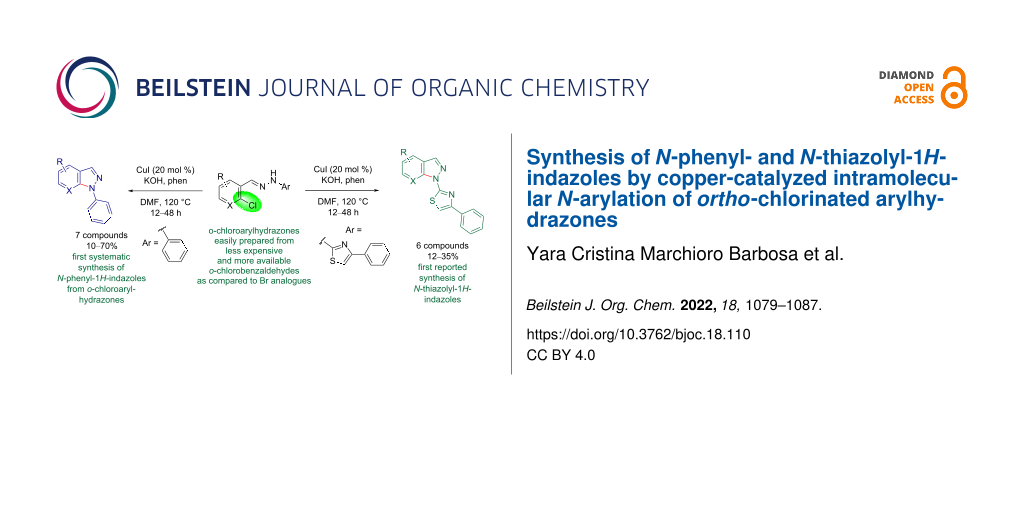