All articles from this author
Hirofumi Endo


All articles from this author
Norihiko Sasaki


All articles from this author
Tomoaki Hamada


All articles from this author
Hiraku Sakai


All articles from this author
Toshiki Nokami

Reaction parameters of the electrochemical polyglycosylation, such as amount of electricity and electrolyte, were also optimized using thioglycoside 1a (see Supporting Information File 1 for details). The complete conversion of monosaccharide 1a was observed with 0.6 F/mol. However, 0.525 F/mol was chosen as the optimal amount of electricity to prevent formation of byproducts, such as hydroxy-substituted sugars that carry an anomeric hydroxy group instead of the ArS group. Although we tested other ammonium triflates, such as tetraethylammonium triflate and 1-butyl-1-methylpyrrolidinium triflate as electrolytes, both electrolytes gave oligosaccharides in lower yield.

There are two possible pathways for chain elongation in electrochemical polyglycosylation (Figure 7). In path a, monosaccharide 1a is converted to the corresponding glycosyl triflate 12, and 4-OH of oligosaccharides 2a–6a reacts with 12 [9]. In path b, oligosaccharides 2a–6a are converted to the corresponding glycosyl triflates 13–17, and 4-OH of monosaccharide 1a reacts with 13–17. It is difficult to exclude the possibility of reactions between oligosaccharides. However, polyglycosylation has been carried out with a slightly excessive amount of electricity (0.525 F/mol), and monosaccharide 1a has always been recovered in more than 15% [10]. Moreover, longer oligosaccharides might be less reactive on grounds of mass transfer because electrochemical activation occurs at the surface of the anode and the substrates must move to the surface of the electrode.

To confirm the reactivity of oligosaccharides, we measured oxidation potentials of monosaccharide 1a, disaccharide 2a, and trisaccharide 3a using a rotating disk electrode (RDE) made of glassy carbon (Figure 8). The oxidation potential of oligosaccharides 2a and 3a (Eox = 1.76 and 1.74 V vs SCE) was higher than that of monosaccharide 1a (Eox = 1.70 V vs SCE). We also examined electrochemical activation of tetrasaccharide 4a to obtain octasaccharide 8a through the dimerization of 4a. However, a trace amount of 8a was formed together with byproducts, and the recovered amount of tetrasaccharide 4a was 64% (Scheme 1). These results strongly suggested that path a in Figure 7 is the most probable mechanism of the reaction.

Electrochemical polyglycosylation (see Figure 4, T1 = −60 °C and T2 = −30 °C) was performed using our second-generation automated electrochemical synthesizer equipped with the H-type electrolysis cell. Thioglycoside 1a (0.20 mmol, 109 mg), Bu4NOTf (1.0 mmol, 393 mg), and dry CH2Cl2 (10 mL) were added to the anodic chamber. Triflic acid (0.2 mmol, 17.6 μL) and CH2Cl2 (10 mL) were added to the cathodic chamber. Electrolysis was performed at −60 °C under constant current conditions until 0.52 F/mol of electricity had been consumed. Then, the reaction temperature was elevated to −30 °C, and the temperature was kept for 1 h. The reaction was quenched with Et3N (0.30 mL), and the reaction mixture was diluted with Et2O and EtOAc and washed with water to remove the electrolyte. The combined organic layer was dried with Na2SO4, and the solvent was removed under reduced pressure. The thus-obtained crude product (110 mg) was purified by preparative GPC using CHCl3 as eluent.

© 2022 Rahman et al.; licensee Beilstein-Institut.
This is an open access article licensed under the terms of the Beilstein-Institut Open Access License Agreement (https://www.beilstein-journals.org/bjoc/terms), which is identical to the Creative Commons Attribution 4.0 International License (https://creativecommons.org/licenses/by/4.0). The reuse of material under this license requires that the author(s), source and license are credited. Third-party material in this article could be subject to other licenses (typically indicated in the credit line), and in this case, users are required to obtain permission from the license holder to reuse the material. 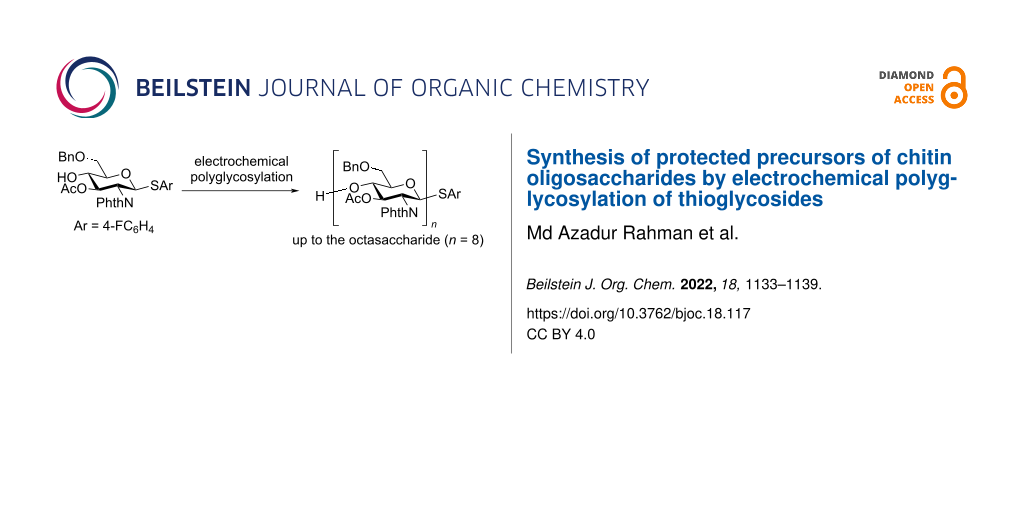