All articles from this author
Kana Wakabayashi


All articles from this author
Ryota Sato


All articles from this author
Hideki Minami


All articles from this author
Kentaro Kawai

When applying our previously reported conditions [43], the intramolecular reductive aldol-type cyclization of 1a proceeded smoothly and gave the desired product 2a in a good yield, but the diastereomeric ratio was not sufficient as shown in entry 1 (Table 1). To improve the diastereoselectivity of the reaction, we optimized the conditions for the reductive aldol-type reaction by intramolecular cyclization of 1, and the results are summarized in Table 1. The use of [RhCl(cod)]2 in dichloromethane gave the best result with high diastereoselectivity, and the stereochemistry of the major product 2a was found to be the syn-form with regard to the CH3 (Cα) and OH (Cβ) moieties (Table 1, entry 7). Interestingly, using the higher coordinating solvents, DMF or DMPU, preferentially gave the opposite diastereomer, i.e., the major product being the anti-form with regard to CH3 (Cα) and OH (Cβ) moieties (anti-2a, Table 1, entries 10 and 11). For stereochemistry assignment, the relative configurations of syn-2a and anti-2a were confirmed by X-ray crystallography. In addition, a NOESY experiment of the product syn-2a showed an nOe correlation between the methine proton on Cα and one of the protons of the benzene ring on Cβ, but not in anti-2a.

Next, various substrates were investigated and the results are summarized in Scheme 2. The synthesis of products 2a–c proceeded smoothly to give the corresponding β-hydroxylactones 2 in moderate to good yields with high diastereoselectivities, although 2d was obtained in low yield. It may suggest that the existence of substituent(s) in γ- and/or δ-position of 2 help the formation of the intermediate structure which works in favor of the intramolecular cyclization. β-Substituted substrates on α,β-unsaturated ester moiety of 1 also gave the products (2g and 2h) in low yields, but the formation of the 7-membered ring (2f) was not achieved. On the other hand, when the previous conditions using the RhCl(PPh3)3 catalyst was applied to the aldol-type cyclization, 5- and 6-membered products were obtained in good yields (see the yields and dr in parentheses in Scheme 2). However, the yields were also greatly affected by the substituents on the β-position of the α,β-unsaturated ester moiety, and all diastereomeric ratios were inferior in the case of the RhCl(PPh3)3 catalyst. The relative configurations of 2b were confirmed by X-ray crystallography, and the relative configurations of 2c, 2g, and 2h were confirmed by NOESY experiments.

Mechanistic investigation of the intramolecular cyclization

The reaction mechanism of the intramolecular cyclization can only be speculative at this stage. We have already reported the generation of a rhodium hydride (Rh–H) complex from RhCl(PPh3)3 and Et2Zn, in which the reaction with tert-butyl acrylate formed the corresponding E-silylenolate via 1,4-reduction at 0 °C [46], even if the reaction was performed at −45 °C (Scheme 3). Also in relation to this result, Mikami and his group reported a rhodium-catalyzed carboxylation of alkenes or activated alkenes by using CO2 with Et2Zn, and a similar Rh–H complex derived from [RhCl(cod)]2 and Et2Zn played an important role in this reaction [48]. Furthermore, Hopmann et al. detected the Rh–H complex derived from [RhCl(cod)]2 and Et2Zn by 1H NMR, and the detailed mechanism disclosed that the Rh–H complex did not interact with CO2 but with the benzene ring in the substrates through an η6 binding intermediate by DFT calculation [49].

Although another mechanism could not be denied in which a Z-enolate intermediate changes to an E-enolate under thermodynamic control, we propose the following mechanism on the basis of the above results (Scheme 3). The Rh–H complex 5 from [RhCl(cod)]2 and Et2Zn would generate predominantly the corresponding E-enolate 6 via 1,4-reduction, which is stabilized through η6 binding with benzene ring of the substrate. Subsequent transmetalation with zinc species 4 readily reacts with the carbonyl group to form the intramolecular C−C bonds at the α-position, then providing the product syn-2a with high regioselectivity. On the other hand, the use of higher coordinating solvents such as DMF or DMPU might break the weak η6 binding of rhodium complex to give anti-2a, predominantly.

There are several reports of bioactive natural products that have a 3-hydroxy-2-methyllactone scaffold in the molecular structure. For example, cytospolide K2 [50] containing a 10-membered lactone and feigrisolide [51] containing a 7-membered lactone are known to exhibit cytotoxicity and antimicrobial activity. Moreover, antiviral activity was also confirmed for aggregatin B [52] containing a 7-membered lactone ring, in which the β-position hydroxy group was dehydrated (Figure 1). Monocrotaline is a kind of pyrrolizidine alkaloid and was isolated from seeds of Crotalaria spectabilis in 1935 [53]. Monocrotaline is used as compound for pulmonary hypertension model in rats. To date, some groups have reported synthetic methods and its synthetic supply will potentially contribute to hypertension treatment [54-57]. Although there have been a lot of reports of pyrrolizidine scaffolds or necine base, the synthesis of necic acid lactones such as monocrotalic acid is rare (Figure 2). Consequently, we attempted to apply the rhodium-catalyzed intramolecular reductive aldol-type reaction to the synthesis of a chiral necic acid lactone that is a part of structural component of monocrotaline.

According to the literature, a Sharpless dihydroxylation of benzyl tiglate (8) to form a chiral diol 9 was followed by a Parikh–Doering oxidation to give the corresponding product 10 in 62% yield (Scheme 4) [58,59]. Subsequent acryloylation in the presence of DMAP and hydroquinone gave the intramolecular cyclization starting material (S)-1j in 61% yield. The transformation of the compound (S)-1j in the rhodium-catalyzed intramolecular reductive aldol-type cyclization proceeded smoothly and gave the chiral necic acid lactone (2S,3S,4R)-2j in 32% yield (Figure 3).

In conclusion, during the development of a rhodium-catalyzed intramolecular reductive cyclization, we found that using [RhCl(cod)]2 improved the diastereomeric ratio of the products compared with other Rh catalysts. It seems that using [RhCl(cod)]2 leads to milder reaction conditions that lead to highly improved diastereomeric ratios. In addition, we demonstrated a new approach to a necic acid lactone 2j that is a diastereomer of monocrotalic acid, a key intermediate of monocrotalin.

We would like to thank Dr. Antal Harsányi at Euroapi Hungary for his helpful comments to improve the quality of the article.

© 2022 Isoda et al.; licensee Beilstein-Institut.
This is an open access article licensed under the terms of the Beilstein-Institut Open Access License Agreement (https://www.beilstein-journals.org/bjoc/terms), which is identical to the Creative Commons Attribution 4.0 International License (https://creativecommons.org/licenses/by/4.0). The reuse of material under this license requires that the author(s), source and license are credited. Third-party material in this article could be subject to other licenses (typically indicated in the credit line), and in this case, users are required to obtain permission from the license holder to reuse the material. 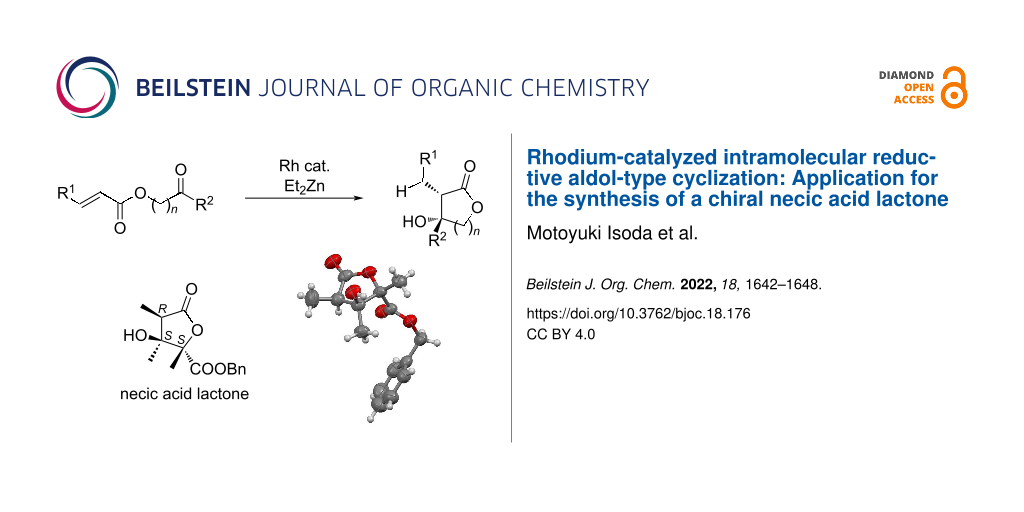