All articles from this author
Selçuk Eşsiz


All articles from this author
Emine Salamci

The first synthesis of 2-amino-3,4-dihydroxycyclooctane-1-carboxylic acid, methyl 6-hydroxy-9-oxo-8-oxabicyclo[5.2.1]decan-10-yl)carbamate, and 10-amino-6-hydroxy-8-oxabicyclo[5.2.1]decan-9-one starting from cis-9-azabicyclo[6.2.0]dec-6-en-10-one is described. cis-9-Azabicyclo[6.2.0]dec-6-en-10-one was transformed into the corresponding amino ester and its protected amine. Oxidation of the double bond in the N-Boc-protected methyl 2-aminocyclooct-3-ene-1-carboxylate then delivered the targeted amino acid and its derivatives. Density-functional theory (DFT) computations were used to explain the reaction mechanism for the ring opening of the epoxide and the formation of five-membered lactones. The stereochemistry of the synthesized compounds was determined by 1D and 2D NMR spectroscopy. The configuration of methyl 6-hydroxy-9-oxo-8-oxabicyclo[5.2.1]decan-10-yl)carbamate was confirmed by X-ray diffraction.

Cyclic β-amino acids have for the past few decades aroused widespread synthetic interest owing to their diverse biological activities, especially applications in the field of medicinal chemistry. β-Amino acids (i.e., amino acids containing an extra methylene group in the backbone) occur naturally in peptidic structures [1-5] and have been used in peptide design to obtain mixed peptides that retain their biological activities [6,7]. Moreover, they can be used as starting substances for different heterocycles, as precursors for the synthesis of polymers, as potential pharmacons, for the synthesis of natural products or analogues, and also as building blocks in drug research [8-11]. Furthermore, some β-amino acid derivatives have antibiotic (oryzoxymycin) and antifungal activities (Figure 1) [12,13].

Initially, we focused on the synthesis of β-lactam 2, which was prepared by the cycloaddition of chlorosulfonyl isocyanate (CSI) to cis,cis-1,3-cyclooctadiene, as described in the literature [26]. β-Lactam 2 was transformed into cis-amino ester 3 by cleavage of the lactam ring with HCl(g) in MeOH (Scheme 1).

N-Boc protection of cis-amino ester 3 with (Boc)2O in pyridine and 4-(dimethylamino)pyridine (DMAP) gave N-Boc-amino ester 4 (yield 95%). The 1H and 13C NMR spectroscopic data of 4 were in agreement with the proposed structure. Treatment of 4 with OsO4/NMO gave the expected diol 5 as a single isomer in 91% yield. We assume that the trans selectivity of hydroxylation in ester 4 is due to the steric effect of the presence of the bulky Boc group. The structure of 5 was determined with the help of 1D (1H and 13C) and 2D (COSY and HMQC) NMR spectra. The diagonal peak at 4.10 ppm has cross peaks with the protons resonating at 2.96, 3.95, and 5.39 ppm, respectively, in the COSY spectrum. The cross peak between H-2 and H-3/H-4 suggests that the proton H-2 should have a trans configuration relative to the proton H-3. Removal of the Boc protection by HCl resulted in the formation of the target β-amino acid 6, which was characterized based on its NMR spectra (Scheme 1).

The N-Boc-amino ester 4 was reacted with m-CPBA to give epoxide 7 as the sole product in 94% yield (Scheme 2). The structure of 7 was assigned based on its NMR spectra. Epoxide 7 was used as the precursor material in the synthesis of the other isomer of β-amino acid 6. The ring-opening reaction of 7 with HCl(g) in MeOH resulted in a mixture of products 8 and 9 in a 9:1 ratio (1H NMR). The product 8 in the reaction mixture was purified by recrystallization from ethanol/ether, but all attempts to purify the expected product 9 failed. The product 8 was obtained as the major product in 80% yield, and the expected product 9 was formed as the minor product in 4% yield. We propose that diol isomer mixture 9 can be formed by solvolysis. The presence of the lactone ring in 8 was determined by 2D NMR spectroscopic data (COSY and HMQC). The diagonal peak at 4.62 ppm has cross peaks with the protons resonating at 4.26 and 4.39 ppm, respectively, in the COSY spectra of 8. The cross peak between H-7 and H-6 showed strong correlation, which clearly supports the trans relation of the proton H-6. The cross peak between H-7 and H-10 also showed weak correlation, which clearly supports the cis relation of the proton H-10. In this reaction, lactonization and hydrolysis of the Boc group to the corresponding amine were observed. The formation of lactone 8 as the major product can be explained by nucleophilic attack of the neighbouring carboxyl group, which was formed by hydrolysis of the corresponding methyl ester.

For the synthesis of other isomeric β-amino acid derivatives, epoxide 7 was treated with two equivalent amounts of NaHSO4 [27] in methylene chloride/MeOH at room temperature (Scheme 3). The formation of a mixture of products 10 and 11 in a 7:3 ratio was determined by NMR spectroscopy. The reaction mixture was purified using preparative silica gel TLC on a chromatotron with ethyl acetate/hexane (50:50) as the eluent to give carbamate 10 and diol isomer mixture 11 in 65% and 25% yields, respectively. However, all attempts to isolate isomer mixture 11 failed. Again, we suggest that diol isomer mixture 11 can be formed by solvolysis. The presence of the lactone ring in 10 was determined by 2D NMR spectroscopic data (COSY and HMQC). The diagonal peak at 4.19 ppm has cross peaks with the protons resonating at 4.49, 1.53, and 2.02 ppm, respectively, in the COSY spectra of 10. The cross peak (δ 4.49 ppm) between H-6 and H-7 showed a strong correlation, which clearly supports the trans relation of the proton H-7. Furthermore, its structure was unambiguously confirmed by single crystal X-ray analysis (Figure 2) [28]. The formation of lactone 10 can again be explained by participation of the neighbouring group, as discussed above. However, during the purification on silica gel of the lactone-Boc product, its transesterification also resulted in corresponding methyl carbamate 10.

We then investigated the epoxide-ring-opening reaction of 7 with sodium azide, to introduce an extra amino group in position 4 on the cyclooctane skeleton. For this, epoxide 7 was treated with NaN3 in the presence of NH4Cl/DMF and this formed lactone 13 as the sole product in 80% yield (Scheme 4). The epoxide 7 was treated with NaN3 and NH4Cl/DMF to obtain compound 12. From this reaction, the formation of unexpected lactone 13 was observed. The reaction was repeated again with only NH4Cl and DMF, and the reaction resulted in formation of compound 13. This experiment shows that NaN3/DMF does not to play any role in this transformation. The structure of 13 was elucidated with the help of the 2D NMR (COSY and HMQC) experiments. Finally, removal of the Boc group from 13 with HCl(g)–MeOH resulted in the formation of cyclic β-amino acid derivative 8 in high yield.

Our suggested mechanism for the reaction of epoxide 7 with NaHSO4 in a mixture of methylene chloride/MeOH proceeded as described in Scheme 5. First, the C=O group of the ester prefers to attack the protonated epoxide to give intermediate 15. Then, water, which is available in methanol as an impurity, attacks the oxonium ion to give dealkylation product 10, which is a typical transesterification reaction.

To explain the formation of lactone 10, we performed a series of DFT computations using the Gaussian 16 software [29]. For this purpose, we performed geometry optimizations using the B3LYP functional [30-33]. Vibrational frequencies were computed to characterize each stationary structure. In all the computations, Pople’s polarized triple-ζ split valence basis set with diffuse functions, 6-311++G(d,p) [34-36], was utilized. The solvation model based on density (SMD) [37] was used to investigate the effects of methanol (ε = 32.613) and dichloromethane (ε = 8.93) on the computed Gibbs energies. For the TS between species A and B, the TSA-B notation is used throughout the article.

Experimental section, 1H and 13C NMR spectra for all new compounds, as well as selected 2D NMR spectra and crystallographic data for compound 10 are provided. Optimized geometries of the transition states with selected interatomic distances and cartesian coordinates for computed structures are reported.

The authors are indebted to the Atatürk University for its support. We would also like to thank Professor Ertan Sahin for performing the X-ray analysis.

This study was funded by the Research Fund of the Atatürk University (project number: 2014/54).

An anomalous addition of chlorosulfonyl isocyanate to a carbonyl group: the synthesis of ((3aS,7aR,E)-2-ethyl-3-oxo-2,3,3a,4,7,7a-hexahydro-1H-isoindol-1-ylidene)sulfamoyl chloride

© 2022 Polat et al.; licensee Beilstein-Institut.
This is an open access article licensed under the terms of the Beilstein-Institut Open Access License Agreement (https://www.beilstein-journals.org/bjoc/terms), which is identical to the Creative Commons Attribution 4.0 International License (https://creativecommons.org/licenses/by/4.0). The reuse of material under this license requires that the author(s), source and license are credited. Third-party material in this article could be subject to other licenses (typically indicated in the credit line), and in this case, users are required to obtain permission from the license holder to reuse the material. 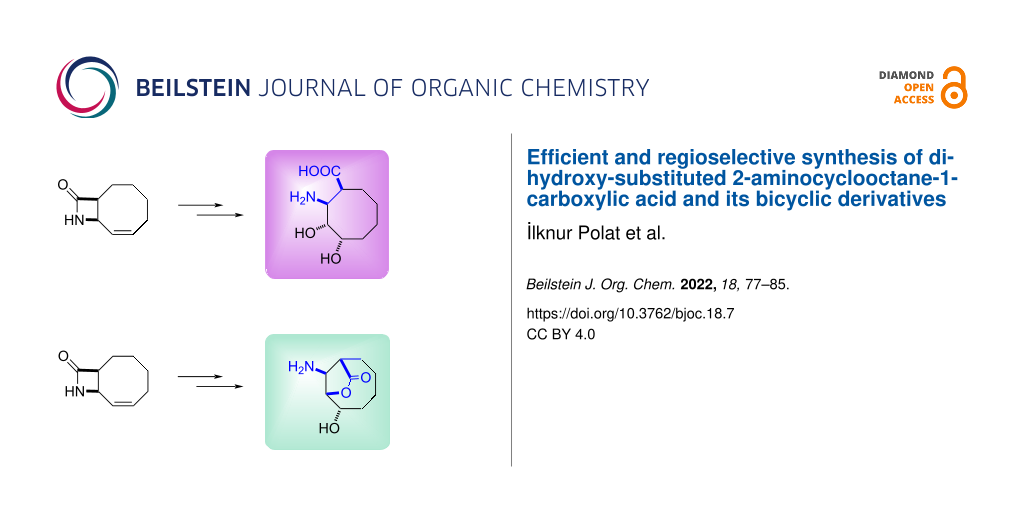