All articles from this author
Ryuhei Akasaka


All articles from this author
Naruhiro Yoshida


All articles from this author
Toru Amaya

Dibenzo[g,p]chrysene (DBC), which consists of a twisted naphthalene core with four fused benzene rings, is a promising framework for organic electronic materials. Therefore, the research for structure–property relationships is important for the design of DBC-based materials. Here, the electrochemical and spectroscopic properties of DBC derivatives were investigated, and the effects of substituents and torsion of the naphthalene moiety were examined based on density functional theory (DFT) calculations. All the substituted DBC derivatives showed higher oxidation potentials than that for DBC-H, even for compounds that contained an electron-donating group such as DBC-Me and DBC-SMe. DFT calculations clearly indicate that these higher oxidation potentials are due to the ineffective conjugation of the MeO group, which is oriented perpendicular to the benzene ring because of the steric repulsion of substituents on both sides. More specifically, the inductive effect of the MeO group is dominant rather than the mesomeric effect when the substituent is located at both sides of the MeO group. Concerning the torsion of the naphthalene moiety, the twisting results in a slight increase in the HOMO and a slight lowering of the LUMO. The twisting effect is much smaller than the conjugation effect of the MeO group. Absorption spectra of all the substituted DBC derivatives also showed a red-shift as compared to that for DBC-H. Concerning the luminescence, a strong photoluminescence was observed for DBC-H and DBC-Si.

Polycyclic aromatic hydrocarbons (PAHs) have attracted interest as potential electronic and optoelectronic materials [1-12]. Non-planar PAHs have been extensively investigated from the viewpoint of their synthetic challenge and/or for the development of functional organic materials [13-22]. Among such PAHs, twisted acenes are an interesting class of compounds due to their characteristic structures and conjugation systems [23-25]. Dibenzo[g,p]chrysene (DBC), which consists of a twisted naphthalene core with four fused benzene rings (Figure 1a) [26], is a promising framework for serving as organic semiconductors, dyes, liquid crystals, and light-emitting materials. A number of substituted DBCs have been reported in this context [27-46]. To develop charge-transport materials, Rathore et al. reported on the stability of radical cations of DBCs with MeO groups located at X and/or Y (MeO-DBC-1, MeO-DBC-2, and MeO-DBC-3, Figure 1b) [43]. The first oxidation potential (Eox1) of MeO-DBC-1 was reported to be 0.40 V (based on Fc/Fc+), which is 0.48 V lower than that of DBC. In contrast, when a MeO group is introduced at the X position (MeO-DBC-2), the Eox1 is lower by only 0.15 V than that of DBC. It has also been reported that the oxidation potential of MeO-DBC-3, in which the MeO groups are attached at both X and Y, is 0.06 V higher than that for MeO-DBC-1. These remarkable substituent effects are an interesting and important finding for molecular design, but the effects of X and Z substituents and the twisting of the naphthalene moiety have not been reported.

We previously studied the synthesis of solution-processable DBC derivatives with various substituents attached [47-51]. We also recently reported on a synthetic strategy for preparing DBC derivatives using DBC-H with four isopropyl groups at X as a key template for the derivatization (Figure 1c). Based on this strategy, various substituents were introduced at Z to produce DBC-Br, DBC-Me, DBC-SMe, DBC-S(O)2Me, and DBC-Si (Figure 1c) [52]. The structures of all these derivatives were determined by X-ray crystallographic analysis, in which torsion angles were varied in a range from 31.8º (DBC-Si) to 57.4º (DBC-S(O)2Me) [52]. These DBC derivatives have four methoxy moieties at the Y position, which aroused our interest concerning the stability of those oxidation states.

Herein, we report on the electrochemical and spectroscopic properties of the DBC derivatives, where the effects of substituents and torsion were examined with the aid of DFT calculations. Consequently, the findings revealed that the substitution at the Z position induces a change in the conformation of the MeO groups, making the conjugation of the MeO groups ineffective, thus resulting in the lowering of both HOMO and LUMO energy levels. Concerning the twisting, the effect to the HOMO and LUMO energy levels was found to be small. We anticipate that the impact of diverse substituents and torsion angles on the chemical properties would be beneficial in terms of creating DBC-based materials.

Cyclic voltammograms (CVs) and square-wave voltammograms (SWVs) were measured for DBC-H, DBC-Me, DBC-SMe, DBC-Br, DBC-S(O)2Me, and DBC-Si (Figure 2) [53]. Table 1 summarizes the first and second oxidation potentials based on Fc/Fc+ (Eox1 and Eox2) determined from the SWVs, together with the torsion angles determined from the X-ray crystal structures [52], the HOMO and LUMO levels determined from DFT calculations [52,54] and estimated based on Eox1. The voltammogram of DBC-H exhibited a reversible, two-step, two-electron redox process, with Eox1 and Eox2 values of 0.34 V and 0.72 V, respectively (Figure 2a). The value of Eox1 is 0.06 V lower than that of MeO-DBC-1 which does not contain isopropyl groups. This is in contrast to MeO-DBC-3, in which four MeO groups are introduced in place of the isopropyl groups, which has a 0.06 V higher oxidation potential than that of MeO-DBC-1. This indicates that alkyl substituents in the X position are effective in stabilizing the radical cation, thus making it more susceptible to oxidation. Unlike DBC-H, an irreversible voltammogram was observed in case of DBC-Me (Figure 2b). The first oxidation potential obtained from the SWV was 0.51 V, which is 0.17 V higher than that of DBC-H. This higher oxidation potential is somewhat surprising, which is discussed in the next paragraph based on DFT calculations. The CV of DBC-SMe showed a reversible two-electron redox process, with Eox1 and Eox2 values of 0.41 V and 0.88 V, respectively (Figure 2c) [53]. It is interesting to note that DBC-SMe exhibited a higher oxidation potential than DBC-H despite the electron-donating nature due to mesomeric effects based on lone pairs of sulfur atoms. In the CV of DBC-Br, a one-electron redox was observed as a reversible process, but a second redox process was not observed (Figure 2d). On the other hand, both the first and second oxidation processes were observed in the SWV of DBC-Br (Eox1 and Eox2 are 0.79 V and 1.15 V, respectively). DBC-S(O)2Me with the electron-withdrawing substituents resulted in a reversible oxidation wave, but only a one-electron redox process could be observed due to the limitations of the solvent (Figure 2e). The potential of 0.98 V is the highest among the compounds measured in this study. To investigate the reduction behaviour, DBC-S(O)2Me was measured in the low potential region. A peak, which appeared to be the one-electron reduction peak, was observed at −2.25 V (see Figure S1 in Supporting Information File 1). Finally, the CV of the silole-fused DBC-Si was investigated and the results indicated a reversible two-electron redox process (Eox1 and Eox2 are 0.43 V and 0.82 V, respectively, Figure 2f). These values for Eox1 and Eox2 for DBC-Si are slightly higher than those of DBC-H. The obtained electrochemical data were nearly consistent with the trend of the values for HOMO obtained based on DFT calculations.

Absorption and photoluminescence spectra and the simulations of absorption based on TD-DFT calculations [58] are shown in Figure 4 (see Figure S3 in Supporting Information File 1 for excited spectra). The spectral data are summarized in Table 3. The TD-DFT calculations reproduce the absorption spectra quite well. The longest absorption peak is attributed to the transition from HOMO to LUMO and HOMO-1 to LUMO+1 (see Tables S1–S6 in Supporting Information File 1). The trend for the order of optical band gap is roughly consistent with that of the HOMO–LUMO gap obtained from DFT calculation [52].

aEstimated from the absorption edge. bMeasured based on the absolute quantum yield method using an integrating sphere. cToo weak photoluminescence to measure.

The electrochemical and spectroscopic properties of DBC derivatives were investigated, and the effects of substituents and torsion of the naphthalene moiety were discussed based on DFT calculations. It was also found that introducing a substituent at Z position resulted in a higher oxidation potential than that for DBC-H, even for compounds that contained electron-donating groups, such as DBC-Me and DBC-SMe. DFT calculations clearly indicate that this is due to the ineffective conjugation of the MeO group which is oriented perpendicular to the aromatic ring because of the steric repulsion of substituents on both sides. More specifically, the inductive effect of the MeO group is dominant rather than the mesomeric effect when the substituent is present at the Z position. Concerning the torsion of the naphthalene moiety, the twisting caused a slight increase in the HOMO and a slight lowering of the LUMO. The twisting effect is much smaller than the conjugation effect of the MeO group. Absorption spectra of all the substituted DBC derivatives also showed a red-shift as compared to that for DBC-H. Concerning photoluminescence, a strong photoluminescence was observed for DBC-H and DBC-Si. The findings reported in this study will be useful for the molecular design of such materials, and could lead to electronic material applications in the future.

The computation was performed using Research Center for Computational Science, Okazaki, Japan (Project: 21-IMS-C190, 22-IMS-C174). We thank Prof. Shinobu Aoyagi at Graduate School of Science, Nagoya City University for the use of a voltammetry analyser.

Tetsuo Iwasawa is grateful to JSPS Grant-in-Aid for Scientific Research (C) (22K05086) and 2022 the Joint Research Center for Science and Technology of Ryukoku University.

Naphthalonitriles featuring efficient emission in solution and in the solid state

© 2022 Imai et al.; licensee Beilstein-Institut.
This is an open access article licensed under the terms of the Beilstein-Institut Open Access License Agreement (https://www.beilstein-journals.org/bjoc/terms), which is identical to the Creative Commons Attribution 4.0 International License (https://creativecommons.org/licenses/by/4.0). The reuse of material under this license requires that the author(s), source and license are credited. Third-party material in this article could be subject to other licenses (typically indicated in the credit line), and in this case, users are required to obtain permission from the license holder to reuse the material. 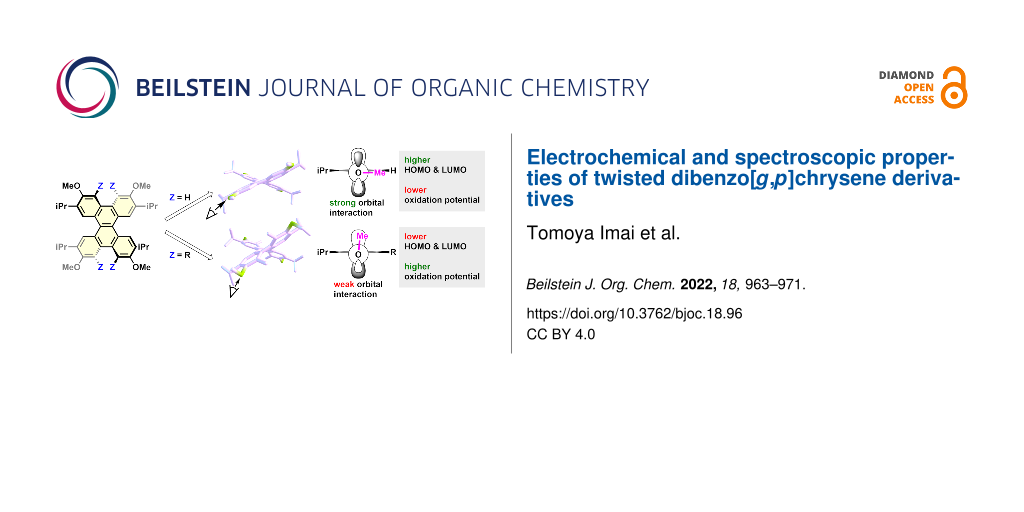