All articles from this author
Frederic W. Patureau

This article is part of the thematic issue "C–H bond functionalization: recent discoveries and future directions".

Radical-initiated cascade reactions constitute a powerful synthetic approach to construct multiple C–C or C–X bonds in one pot. As such, these tend to allow facile access to many complex natural molecules and drugs [1-6]. Recently, radical-initiated cascade cyclizations involving acrylamides have attracted considerable attention due to their propensity to build important oxindole scaffolds. These are broadly found in natural products, pharmaceuticals, and bioactive molecules (Figure 1) [7-13]. Although a number of synthetic approaches have already been explored [14-20], these existing methods generally require stoichiometric, often onerous reagents [21-28], and/or high temperatures [29-38].

In the past few years, photocatalytic processes have become one of the most powerful tools in developing radical-initiated addition/cyclization cascades from acrylamides for the synthesis of oxindoles [39-41]. The radicals are typically generated from alkyl halides [42-44], carboxylic acids [45-47], simple alkanes [48], alkylboronic acids [49], isocyanides [50], or other [51-53]. In this context, the group of Fu reported a Ru(bpy)3Cl2-catalyzed synthesis of N-Boc proline oxindole derivatives under visible-light assistance [47]. Therein, N-hydroxyphthalimide (NPhth) esters were utilized as alkyl radical precursors, which can be readily prepared from highly available carboxylic acids. In 2015, Cheng and co-workers disclosed a visible light-mediated radical tandem cyclization of N-arylacrylamides with N-(acyloxy)phthalimides to access 3,3-dialkylated oxindoles in the presence of [Ru(bpy)3Cl2]·6H2O [46]. However, these seminal methods remain limited by the need of noble-metal-based photocatalysts, excess additives and limited substrate scopes (Scheme 1a).

With the rapid development of sustainable chemistry, developing low-cost and transition-metal-free photocatalytic methods has become a strategic priority. In 2019 [54], the groups of Fu and Shang pioneered the photocatalytic decarboxylative alkylation of silyl enol ethers and N-heteroarenes by using a novel catalytic system based on sodium iodide (NaI) and triphenylphosphine (PPh3), suggested to function as an electron donor–acceptor (EDA) complex [55-60]. Compared to previously reported radical reactions, this novel catalytic system has the key advantage of circumventing the need for external redox additives and/or noble metals, using readily available and cost-effective NaI and PPh3 under mild reaction conditions. In a broader context, phosphine organocatalysis is probably still underappreciated in organic synthesis, and could lead to important future synthetic developments [61-67]. The NaI/PPh3 system has been further broadly applied to the functionalization of alkenes [68-70], as well as to decarboxylative C(sp3)–X bond formation [71], cyclization of 1,7-enynes [72,73] and other reactions [74-77]. Inspired by these advances, we developed here a visible light-mediated decarboxylative radical cascade cyclization of N-arylacrylamides under NaI/PPh3 catalysis, for the most efficient and practical synthesis of quaternary oxindoles (Scheme 1b and 1c). It should be noted that during the finalization of this work, a similar, however stoichiometric CsI/PPh2Cy-mediated method appeared from the Yang and Li groups (Scheme 1b) [28]. In contrast, the method we present here is 1) catalytic, 2) it employs the far less onerous NaI/PPh3 system, and 3) it displays a considerably broader substrate scope.

Key elements of reaction optimization are summarized in Table 1. With NaI (20 mol %) and PPh3 (20 mol %), acrylamide 1a and redox-active ester 2a were used as model substrates to react for 36 h in acetonitrile (MeCN) under blue LEDs irradiation and N2 atmosphere, delivering the desired oxindole derivative 3aa with 72% isolated yield (Table 1, entry 1). Other iodide sources, such as LiI, KI, RbI, CsI, CaI2, and a quaternary ammonium iodide, while also effective, provided slightly lower yields (Table 1, entries 2–7). It should be noted that all tested iodide sources were found soluble under those conditions. Some diverse phosphines were then screened. Aromatic phosphines performed best (Table 1, entries 8 and 9), the cheapest PPh3 remaining however optimal. In contrast, tricyclohexylphosphine PCy3 performed poorly (Table 1, entry 10), and bulky tri-o-tolylphosphine almost shut down the reaction (Table 1, entry 11). These results indicate that the accessibility of the phosphorus center is important. Next, the solvent was investigated. Replacing acetonitrile with dimethyl sulfoxide (DMSO), or dimethylacetamide (DMA), or acetone, or ethyl acetate (EA), resulted in inferior yields (Table 1, entries 12–15), and no product was detected when using 1,4-dioxane or dichloromethane (DCM) as reaction solvent (Table 1, entries 16 and 17). Although the reaction also proceeded without NaI, only a low yield of 3aa was then obtained (Table 1, entry 18). PPh3 and irradiation are however both essential for this decarboxylative cascade cyclization process (Table 1, entries 19 and 20).

With the optimized conditions in hand, we then explored the scope of N-arylacrylamides with different substituents. A series of acrylamides showed good compatibility under standard conditions, offering the desired oxindoles in moderate to good yields (Scheme 2). Electron-donating groups at the para-position of the phenyl ring, such as methyl or methoxy groups, decreased slightly the yield, to 68% and 66%, respectively (3ba and 3ca). When these substituents were replaced by common halogens or electron-withdrawing groups, good yields of the corresponding oxindoles (3da–ga) were achieved. A trifluoromethyl-substituted acrylamide afforded the product 3fa in very high 85% yield. In addition, ortho-substitution at the N-aryl moiety was also well tolerated, albeit with slightly decreased yields (3ha–ka, 50–63%).

Interestingly, a cyclic N-arylamide derivative was also well tolerated, furnishing polycyclic structure 3la in 67% yield. In addition, substrates with different N-substituents, such as ethyl, benzyl, and phenyl, could be converted into the expected products 3ma–oa in good yields. It should be noted that replacing the methyl with a phenyl group at the N-arylacrylamide core significantly affected the reaction efficiency from 72% to 34% yield (3pa). Satisfyingly, substrate 1q could successfully undergo decarboxylative cascade cyclization to afford 3qa with 70% yield, which is used as a key intermediate in the synthesis of (±)-physovenine and (±)-physostigmine alkyl analogues exhibiting inhibitory activity against acetylcholinesterase and butyrylcholinesterase [30,78-84]. Subsequently, we expanded the scope of this protocol to include a benzamide derived acrylamide 1r. The expected six-membered ring structure 3ra could be successfully isolated with a good yield (66%).

A number of alkyl radical precursors were then synthesized and evaluated in the reaction (Scheme 3). We found that redox-active esters derived from primary, secondary, and tertiary aliphatic carboxylic acids were all compatible with the method. Cyclic substrates bearing cyclobutyl, cyclopentyl, and indenyl groups could deliver the corresponding desired products with good yields (3ab–ad, 63–74%), while an adamantyl-derived substituent proved more challenging (3ae, 40%). The use of other cyclic substituents such as oxygen-containing and nitrogen-containing rings gave good yields of the target oxindoles (3af–ah, 65–76%). In addition, a symmetrically α-substituted redox-active esters furnished the corresponding quaternary oxindole 3ai with 69% yield. Moreover, an asymmetrically α-branched starting material could react with similar efficiency, affording oxindole 3aj as a 1:1.1 mixture of diastereomers. Interestingly, this method also enabled the synthesis of the highly sterically demanding oxindole 3ak in good yield when using a tert-butyl N-hydroxyphthalimide ester as the tert-butyl radical precursor. Importantly, a redox-active ester derived from methionine could be converted effectively to α-aminoalkylation product 3al in overall 70% yield, which thus provides a mild method for the functionalization and derivation of abundant natural or unnatural amino acids. Some functional groups such as a terminal alkene in 3am, a terminal alkyne in 3an, and an alkyl chloride in 3ao proved compatible, associated with encouraging yields. In order to further demonstrate the utility of our protocol, a complex scaffold derived from lithocholic acid was tested, and was found to smoothly undergo the decarboxylative cyclization towards oxindole 3ap in 63% yield.

In order to gain insight into the reaction mechanism, some control experiments were further performed. When a radical scavenger such as 2,2,6,6-tetramethyl-1-piperidinyloxyl (TEMPO) was added to the catalytic system under standard conditions, the reaction was fully inhibited, and a TEMPO-trapped adduct (4) was detected by HRMS (Scheme 4a). Moreover, the radical-mediated ring-opening product 3am could be obtained with 66% yield in a radical clock experiment when redox-active ester 5 was engaged to react with acrylamide 1a under standard conditions (Scheme 4b). Finally, it should be noted that benzoyl ester substrate 6a did not deliver the corresponding cyclized product 7aa (Scheme 4c). All of these outcomes indicate that a radical species should be involved in this decarboxylative cascade cyclization towards oxindoles under NaI/PPh3 catalysis. Thus, the mechanism should run in a similar fashion to related well-documented previous reports [54,68-77], through a light-induced, phosphine-assisted, intermolecular electron transfer from sodium iodide to the redox-active ester.

© 2023 Liu et al.; licensee Beilstein-Institut.
This is an open access article licensed under the terms of the Beilstein-Institut Open Access License Agreement (https://www.beilstein-journals.org/bjoc/terms), which is identical to the Creative Commons Attribution 4.0 International License (https://creativecommons.org/licenses/by/4.0). The reuse of material under this license requires that the author(s), source and license are credited. Third-party material in this article could be subject to other licenses (typically indicated in the credit line), and in this case, users are required to obtain permission from the license holder to reuse the material. 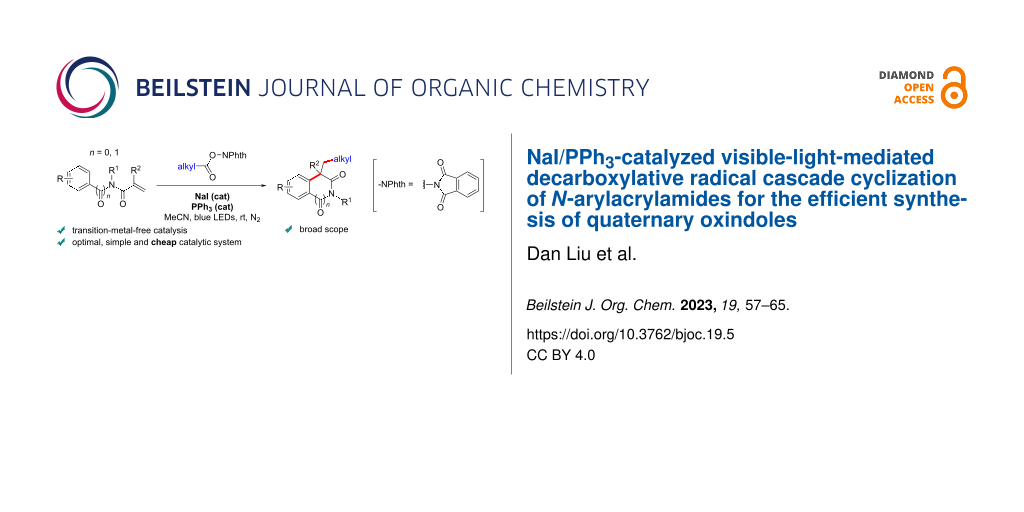