All articles from this author
Moustafa Sh. Moustafa

2-Arylhydrazono-3-oxobutanenitriles 2 was reacted with hydroxylamine hydrochloride to yield amidooxime 3. This was cyclized into the corresponding oxadiazole 4 on refluxing in acetic anhydride. When refluxed in DMF in presence of piperidine, the corresponding 1,2,3-triazoleamine 5 was formed. The latter was acylated to 6 by addition of acetic anhydride while treatment of 5 with malononitrile gave the 1,2,3-triazolo [4,5-b]pyridine 8. Treatment of acetyl derivative 6 with DMFDMA gave enaminone 9. The enaminone 9 was coupled with benzenediazonium chloride to yield phenylazo-1,2,3-triazolo [4,5-b]pyridine 10. Trials to convert compound 14 into 1,2,3-triazolo [4,5-d]pyrimidine 15 via refluxing in AcOH/NH4OAc failed. Instead the hydrolyzed product 5 was formed.

Interest in 1,2,3-triazole chemistry has recently been revived. [1-4] Zaprinast (1) is used as cyclic AMP phosphodiasterase inhibitor. [5] Plenty of 1,2,3-triazoles have also been reported to have useful pharmaceutical potential. [6-9] Synthetic approaches to 1,2,3-triazoloazines are rather limited. There are in fact few known routes to 4-functionally substituted 1,2,3-triazole-5-amines. [7] The latter is one of the logical starting points for condensed 1,2,3-triazoloazines. In the present article we provide a versatile route to these derivatives.

Reacting 2c with hydroxylamine hydrochloride in ethanolic sodium acetate afforded the corresponding amidooxime 3 in good yield. Formation of amidooximes on reacting 2-arylhydrazononitriles with hydroxylamine hydrochloride under similar conditions has been reported earlier by Elnagdi et al. [10,11] Attempted cyclization of 3 into 1,2,3-triazole via reflux in acetic anhydride, as has been reported recently, [11] afforded a product that can be assigned as 1,2,4-oxadiazolylphenylhydrazone structure 4 or the isomeric acetylamino-1,2,3-triazole structure 6. Phenylhydrazono-1,2,4-oxadiazoles have been reported to rearrange thermally into acylamino-1,2,3-triazoles. [12] Compound 5 could be obtained via refluxing 3 in DMF in the presence of piperidine or anhydrous sodium acetate. Acylation of the latter afforded the acetylamino-1,2,3-triazole 6 which proved to be different in all respects from 4. To exclude the possible rearrangement of 3 prior to cyclization (Tiemann rearrangement), [13] as has been noted recently by Al-Matar et al, [14] and the possibility that the really formed product is the 5-amino-1,2,4-triazole 7. We decided to investigate further the chemical reactivity pattern of the cyclized product (Scheme 1) to support our conclusion.

Compound 5 was reacted with malononitrile in refluxing DMF to yield the triazolopyridine 8, thus confirming that the aminofunction and the acetyl function are adjacent. Moreover, reacting 6 with dimethylformamide dimethylacetal (DMFDMA) afforded the cis enaminone 9 (J = 8 Hz) despite the fact that secondary enaminones have been established to prefer adopting the trans configuration. [15] Compound 9 was coupled with benzenediazonium chloride most likely through the intermediate 11a. The latter intermediate cyclized into 11b. Deacetylation of 11b followed by hydrogen shift produced 10. This again confirms that the acetyl and the amino functions in cyclization product are adjacent as in 5 and therefore excluding 7 (Scheme 2). Typical of enaminones, compound 9 reacts with naphthoquinone to yield the benzofuran 12 and with hydrazine hydrate to yield pyrazolyl-1,2,3-triazole 13 in good yields.

Attempts to convert 4 into oxadiazolylhydrazone 6 by heating in DMF afforded 14 whose structure could be elucidated through synthesis independently from 3. Trials to cyclise 14 into triazolopyrimidine 15 failed under a variety of conditions. It is thought that compound 15, if formed, has hydrolyzed to 5 (Scheme 3).

An excellent simple route to 2-substituted-1,2,3-triazols has been reached. It could be also revealed that the formed triazoles are excellent precursors to condensed triazoles and azolyltriazoles.

Approaches towards the synthesis of 5-aminopyrazoles

© 2007 Al-Mousawi and Moustafa; licensee Beilstein-Institut
This is an Open Access article under the terms of the Creative Commons Attribution License (http://creativecommons.org/licenses/by/2.0), which permits unrestricted use, distribution, and reproduction in any medium, provided the original work is properly cited.
The license is subject to the Beilstein Journal of Organic Chemistry terms and conditions: (http://www.beilstein-journals.org/bjoc) 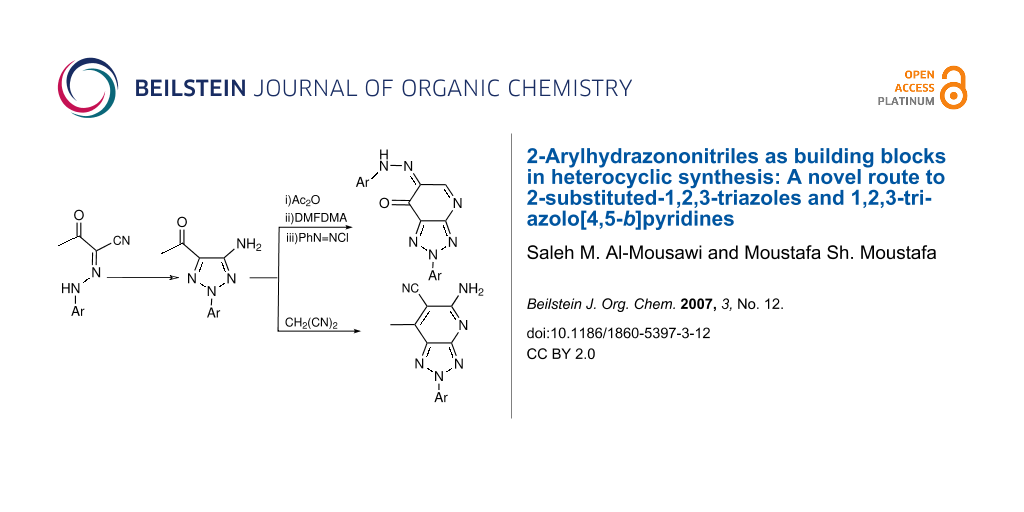