All articles from this author
Ali Saffar-Teluri

The combination of ultrasound and photochemical methods has been used for the catalytic ring opening of α-epoxyketones by 1-benzyl-2,4,6-triphenylpyridinium tetrafluoroborate (NBTPT) as photocatalyst in methanol. Sonication of these compounds in the presence of NBTPT did not result in the opening of epoxide ring, but the use of ultrasound increased the rate of photoreaction.

The advantages of ultrasound-assisted chemical reactions include higher yields, shorter reaction times and milder reaction conditions when compared with classical methods. [1-5] The effect of ultrasound has mostly been shown by increasing the yields of reactions and in some cases changing the ratio of products formed. The most important effects of ultrasound arise from acoustic cavitation: formation, growth, and implosive collapse of bubbles in the liquid by passing ultrasonic waves through this medium. [3,6] The implosive collapse of the bubble generates localized hot spots through adiabatic compression or shock wave formation within the gas phase of the collapsing bubble. This leads to development of temperatures up to 5000 K and high pressures of 1800 atm and cooling rates in excess of 1010 K/s within the cavities during their collapse. [3,6] In all of these reactions it was found that ultrasound accelerates the reactions. [7-17]

It is well known that the substituted pyridinium cations are good electron acceptors. [18] Garcia and coworkers have used N-alkyl-2,4,6-triphenylpyridinium tetrafluoroborate as photosensitizer in the photochemical cyclization of 5-methyl-4-hexenoic acid to the corresponding γ-lactone. [19] In our recent study, we have used 1-benzyl-2,4,6-triphenylpyridinium tetrafluoroborate (NBTPT) as photocatalyst in a highly diastereoselective ring opening of α-epoxyketones in acetone solution with the formation of 1.3-dioxolanes. [20]

Ring opening of epoxides and α-epoxyketones in the presence of various nucleophiles has received considerable attention in recent years, partially owing to current interest in single electron transfer (SET) process and also because of potential application in organic synthesis. Such reactions have been recognized as important processes not only in thermal but also in photochemical transformations. Single electron transfer (SET) induced ring opening reactions of epoxides and α-epoxyketones have demonstrated C-C and C-O bond cleavages through photo-induced electron transfer by various electron donors such as triethylamine (TEA), [21] tribenzylamine (TBA) [20] and 1,3-dimethyl-2-phenylbenzimidazoline (DMPBI) [22-24] or thermally induced single electron transfer by electron donating compounds such as samarium diiodide, [25] tributyltin hydride [26] and bis(cyclopentadienyl)titanium(III) chloride. [27] Ring opening reactions of epoxides and α-epoxyketones have also occurred thermally or photochemically by the presence of various electron acceptors. These reactions have been observed thermally by ceric ammonium nitrate (CAN), [28,29] 2,3-dichloro-5,6-dicyano-p-benzoquinone (DDQ) [30] and iron(III) chloride [31] or photo-induced electron transfer reactions by dicyanoanthracene (DCA), [32,33] tetracyanoethylene (TCNE) [34,35] and 2,4,6-triphenylpyrilium tetrafluoroborate. [36-40] In the case of C-C bond cleavage, the generated intermediates from epoxide radical cations have been trapped by molecular oxygen to form trioxolane derivatives [32-34] or by dipolarophiles to form various tetrahydrofurans and dihydrofurans. [41] In the absence of appropriate dipolarophiles, cis/trans isomerization of the epoxide ring has been observed. [42] The cleavage of Cα-O or Cβ-O bonds has been confirmed either by rearrangement to carbonyl compounds [43-50] or by nucleophilic attack of appropriate reagents. [36,39,51]

Recently, we have reported on the photocatalytic ring opening of α-epoxyketones 1a-f and 2,4,6-triphenylpyrilium tetrafluoroborate (TPT) as photocatalyst in methanol, [37] cyclohexanone, [38] acetone [39] and acetic acid solutions. [40]

Photo-induced reactions of α-epoxyketones 1a-f with 2 in methanol solution produced a mixture of MeOH-adducts 3a-f and 4a-f (Scheme 1). It should be noted that sonication of the mixture of 1a-f with 2 alone did not result in the opening of epoxide ring. The results are summarized in Table 1.

The interesting point in the present work is that in contrast to the results obtained by reaction of 1a-f and 2 in acetone solution, which leads to the highly diastereoselective formation of 1,3-dioxolanes, diasteroselective formations of α-hydroxy-β-methoxyether derivatives 3 and 4 have been only observed in some cases of photocatalytic ring opening of 1a-f and 2 in methanol solution. The observed high distereoselectivity by reaction of 1a-f and 2 in acetone solution has been explained by the involvement of a complex (1a-f... NBTPT*) instead of the intermediates 5–7 for the nucleophilic attack of acetone (Scheme 3). [19]

Due to the polar nature of methanol compared with acetone, we should expect a complete electron transfer from 1a-f to photoexcited 2 under the formation of one of the intermediates 5–7, depending on the location of the additional substituent on the parent molecule 1a. This argument is supported by the effect of the nature of substituents on the rate of reaction and the diastereomeric ratios of products. This leads us to assume that the inductive effect of the p-methyl group and the resonance effect of the p-methoxy group on the phenyl ring directly attached to the epoxide ring increase the contribution of the intermediates 6 and 7 because of the stabilization of carbocation or carbocation-like centers. The more stable conformer of the intermediate 7 can be formed through interaction of oxygen lone pair of carbonyl group with carbocation center (Scheme 4, intermediate 8). This leads to the preferred nucleophilic attack of methanol to the carbon atom at the less hindered site (VII) to form the cis-isomers 3b and 3d (Scheme 4). On the other hand, the intermediates e.g. 5 and 6 is proposed for 1a, 1c and 1e, in which the phenyl ring attached to the epoxide ring is not bearing such electron donating groups on the phenyl ring directly attached to the epoxide ring.

The expanded part of 1H NMR spectra of photoproducts 3a-f and 4a-f (hydrogen located on C-2) shows exactly the ratios of diastereomeric products and is provided [see Supporting Information File 1].

Concerning the effect of ultrasound on the rate of ring opening of α-epoxyketones, we propose that increasing the rate of reaction is caused by efficient mass transfer of the reaction mixture by sonication. Also the electron transfer between the active species in this homogeneous system using sonication occurs faster than the system without sonication. Whereas the use of ultrasound accelerates the rate of photocatalytic ring opening of α-epoxyketones 1a-f, the ratios of diastereomeric photoproducts have not been changed too much using ultrasound irradiation.

In order to explain the results obtained, we have compared the results of the semi-empirical PM3 calculations on the complexes of 1a-f + 2 in the ground state with those of α-epoxyketones 1a-f alone (Figure 1). The data obtained are presented in Table 3.

From the results of this work and our previous work concerning photocatalytic ring opening of α-epoxyketones, it follows that ultrasound alone does not effect the epoxide ring opening. On the other hand, ultrasound can seriously affect photocatalytic ring opening of α-epoxyketones predominantly because of the efficient mass transfer of the reactants and the excited state of NBTPT. The higher yields and shorter reaction times are advantages of this method.

α-Epoxyketones 1a-f and 1-benzyl-2,4,6-triphenylpyridinium tetrafluoroborate 2 were prepared according to the reported procedures. [54-56] Methanol was purchased from Merck and distilled before use. The ultrasonic device used was an UP 400 S instrument from Dr. Hielscher GmbH. A S3 immersion horn emitting 24 kHz ultrasound at intensity levels tunable up to maximum sonic power density of 460 W cm-2 was used. Sonication was carried out at 100 % (maximum amplitude 210 μm). A 3 mm long sonotrode (maximum immerse depth of 90 mm) was immersed directly into the reaction mixture. UV irradiations were performed using a 400 W high pressure mercury lamp from Narva with cooling of samples in Duran glass. 1H NMR spectra of the mixture of photoproducts were measured in CDCl3 solutions containing tetramethylsilane (TMS) as internal standard on a Bruker drx-500 (500 MHz). Preparative layer chromatography (PLC) was carried out on 20 × 20 cm2 plates coated with 1 mm layer of Merck silica gel PF254 prepared by applying the silica as a slurry and drying in air. All products are known and their spectral data have been reported earlier. [37]

We are thankful to the Office of Graduate Studies of the University of Isfahan for their financial support.

© 2007 Memarian and Saffar-Teluri; licensee Beilstein-Institut.
This is an Open Access article under the terms of the Creative Commons Attribution License (http://creativecommons.org/licenses/by/2.0), which permits unrestricted use, distribution, and reproduction in any medium, provided the original work is properly cited.
The license is subject to the Beilstein Journal of Organic Chemistry terms and conditions: (http://www.beilstein-journals.org/bjoc) 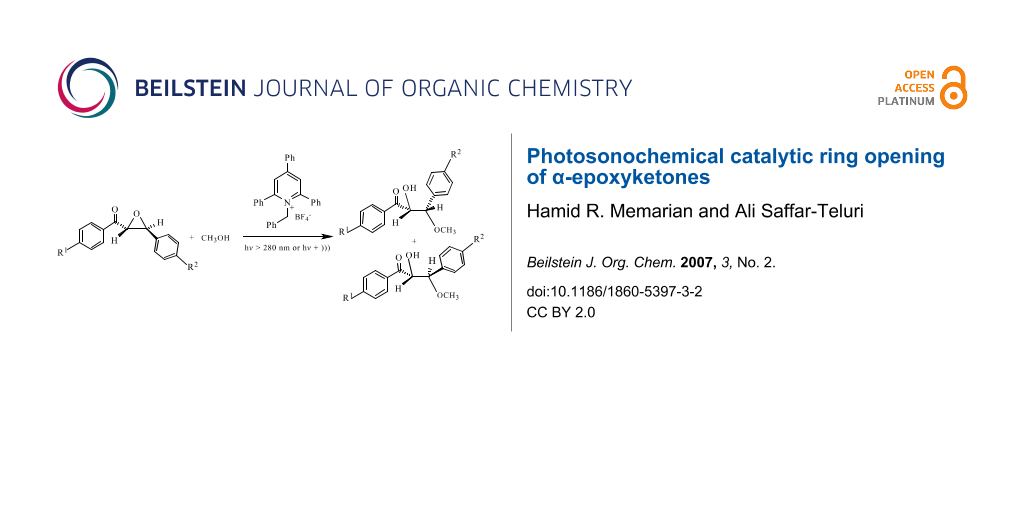