All articles from this author
Carsten Bolm

Chiral base desymmetrisation of dimethyl sulfoximines could provide a general route to chiral, enantioenriched dialkyl sulfoximines with potential for use in asymmetric catalysis.

Asymmetric deprotonation of N-trialkylsilyl dimethyl sulfoximines with either enantiomer of lithium N,N-bis(1-phenylethyl)amide in the presence of lithium chloride affords enantioenriched sulfoximines on electrophilic trapping. Ketones, ketimines, trialkylsilyl chlorides and activated alkyl halides may be used as electrophiles in the reaction. Furthermore, a modified Horner-Emmons methodology was investigated.

Simple chiral lithium amides afford products with enantiomeric excesses of up to 70%, illustrating that chiral base desymmetrisation of dimethyl sulfoximines is possible.

The preparation of enantioenriched sulfoximines is an important goal in synthesis as these S-chiral compounds make interesting ligands for asymmetric catalysis and have been used in the construction of pseudopeptides. [1-4] Enantiomerically enriched aryl-alkylsulfoximines are generally prepared by resolution with camphorsulfonic acid but this method is not applicable to dialkyl sulfoximines. [5-7]

Selective substitution of one of the enantiotopic methyl groups in a dimethylsulfoximine derivative 1, by treatment with a chiral base followed by electrophilic trapping of the resultant anion, would provide an alternative access to enantioenriched sulfoximines of type 2, which are not readily accessible by other means (Scheme 1). [16-19]

N-Trialkylsilyl protected sulfoximines were chosen as candidates for chiral base desymmetrisation as simple variation of the silyl protecting group allows for tuning of the steric bulk at the sulfoximine nitrogen and because of the potential for subsequently unmasking the sulfoximine NH under mild conditions.

Initial attempts at enantioselective deprotonation of TMS protected 1a using a complex of (-)-sparteine 4 (Figure 1) and n-BuLi as the chiral base and trapping the resulting anion with benzophenone gave the desilylated β-hydroxysulfoximine 2a with low enantiomeric excesses (Table 1, Entries 1 and 2).

a Determined by HPLC using a chiral column. b Determined by NMR integration, all other yields refer to the amount of isolated product. c Denotes use of (R,R)-5 (S,S)-5 in all other cases.

Similarly a combination of (-)-4/s-BuLi was unselective in the desymmetrisation of silyl derivative 1b. Thus using TMSCl as electrophile, adduct 2b was obtained in 41% yield with 7% ee (Table 1, Entry 3). Deprotonation with lithium amide (R,R)-5 in the presence of lithium chloride (conveniently generated in situ by deprotonation of the amine hydrochloride with n-BuLi [20,21] gave an inseparable mixture of 2a and bis(1-phenylethyl)amine, encouragingly however, HPLC examination of the mixture using a chiral column indicated that adduct 2a was formed in 42% ee (Table 1, entry 4). To overcome the separation problem, N-tert-butyldiphenylsilyl dimethylsulfoximine 1b was used in place of trimethylsilyl adduct 1a and the electrophilic trap was changed to TMSCl. Under these modified conditions, the chiral amine could be removed from the product mixture by extraction with aqueous phosphoric acid and a 72% yield of the TBDPS adduct 2b was obtained in a promising 36% ee (Table 1, entry 5).

a Reactions were performed using sulfoximine 1b and an excess of lithium amide 5 at -105°C in THF see Supporting Information File 1 for experimental details b Determined by HPLC using a chiral column. c Not determined

Vinyl sulfoximines could be accessed by trapping the lithiated sulfoximine with diethyl chlorophosphate (presumably affording 8) followed by treatment with t-BuOK and an aldehyde in an in situ Horner Emmons process (Scheme 3). [22] Use of 4-chlorobenzaldehyde or 4-phenylbenzaldehyde gave E-alkenes 9 and 10 in moderate yields and enantiomeric excesses.

The absolute configuration of alkene 9 was determined after TBAF deprotection of the sulfoximine nitrogen to give 11 followed by reaction with (R)-O-methyl mandelic acid (Scheme 4) to afford diastereomeric amides (S,R)-12 and (R,R)-12 in a 3:1 ratio. The 1H NMR resonance for the alkene signal for the alkene proton α to the sulfoximine in the major diastereoisomer of 12 occurred downfield (7.07 ppm) from that observed from the minor diastereoisomer (6.99 ppm) (a difference of +0.08 ppm) whereas the methyl group signal for the major diastereomer occurred upfield (3.26 ppm) from the methyl signal for the minor diastereoisomer (3.32 ppm) (a difference of -0.06 ppm) (Figure 2). This may be compared with the results obtained by Yabunchi and Kasumi who initially examined the NMR characteristics of 15 sulfoximine amides and rationalised the chemical shift trends on the basis of the probable favoured conformations of the amides in solution.[23]

Subsequently, this method was shown to be applicable to vinyl sulfoximines.[24] They report Δδ values which are calculated from the 1H NMR spectra of diastereomeric amides, prepared by coupling a single sulfoximine stereoisomer separately with both enantiomers of O-methyl mandelic acid. They found that the difference in chemical shift between the methyl groups of (R,S)-13 and S-(R) isobutyl methyl N-[(R)-methoxylphenylacetyl]sulfoximine (R,R)-13 was -0.078 ppm (the chemical shift differences must be the same for (S,R)-13-(R,R)-13 which can then be compared directly with -0.06 ppm for the difference between diastereomers 12). The differences Δδ for the protons on the methylene attached to diastereomers (R,S)-13 and (R,R)-13 were +0.117 ppm and +0.066 ppm which compare well with +0.08 ppm for the difference in the α vinyl protons of 12. On this basis, the major diastereoisomer was assigned as (S,R)-12 and therefore the minor diastereoisomer was assigned as the (R,R) isomer, indicating that the major enantiomer of 9 formed in the desymmetrisation reaction was (S) configured at sulfur when chiral base (S,S)-5 was used in the presence of LiCl. This can be checked by comparison of the NMR shifts of 12 with the diastereomeric vinyl sulfoximine amides 14.[24] For vinyl sulfoximine amides (S,S)-14 and (S,R)-14 δΔ for the vinylic proton was determined as -0.044 ppm, the difference (R,R)-14 - (R,S)-14 must represent an identity in this case, the difference in chemical shift for the depicted vinylic proton in (R,R)-12 and (S,R)-12 is -0.08 ppm, consistent with the configurational assignment.

A mechanism involving irreversible asymmetric deprotonation to a lithiated sulfoximine followed by rapid anion quenching on addition of the electrophile appears likely. An alternative equilibration of the sulfoximine anion with the chiral amine is less probable as racemic 2b was obtained in 23% yield after TMSCl quenching when sulfoximine 1b was first lithiated by treatment with n-BuLi followed by addition of a solution of (S,S)-bis-N,N-(1-phenylethyl)amine and lithium chloride (Scheme 5).

In an analogous reaction, enantioenriched lithiated sulfoxides racemised via a reversible disproportionation to the sulfoxide and a symmetrical, dilithiated sulfoxide.[16] However this process seems to be unimportant for sulfoximines under the present conditions as the ee of 2g was unchanged by reducing the deprotonation time at -105°C to 10 minutes (28%, 57% ee) or by warming from -105°C to -78°C prior to quenching (furnishing 2g in 48% yield and 57% ee).

In contrast to the situation with most of the electrophiles studied, benzophenone and (diphenylmethylene)toluenesulfonamide may undergo a reversible addition to the sulfoximine anion, whereas in the other cases, substitution is probably irreversible and this difference may have implications for the enantioselectivity in these cases.

MJM is grateful to the Alexander von Humboldt Foundation for financial support and to Dr. Lukas Hintermann for valuable suggestions. The Fonds der Chemischen Industrie sponsored this research.

© 2007 McGrath and Bolm; licensee Beilstein-Institut
This is an Open Access article under the terms of the Creative Commons Attribution License (http://creativecommons.org/licenses/by/2.0), which permits unrestricted use, distribution, and reproduction in any medium, provided the original work is properly cited.
The license is subject to the Beilstein Journal of Organic Chemistry terms and conditions: (http://www.beilstein-journals.org/bjoc) 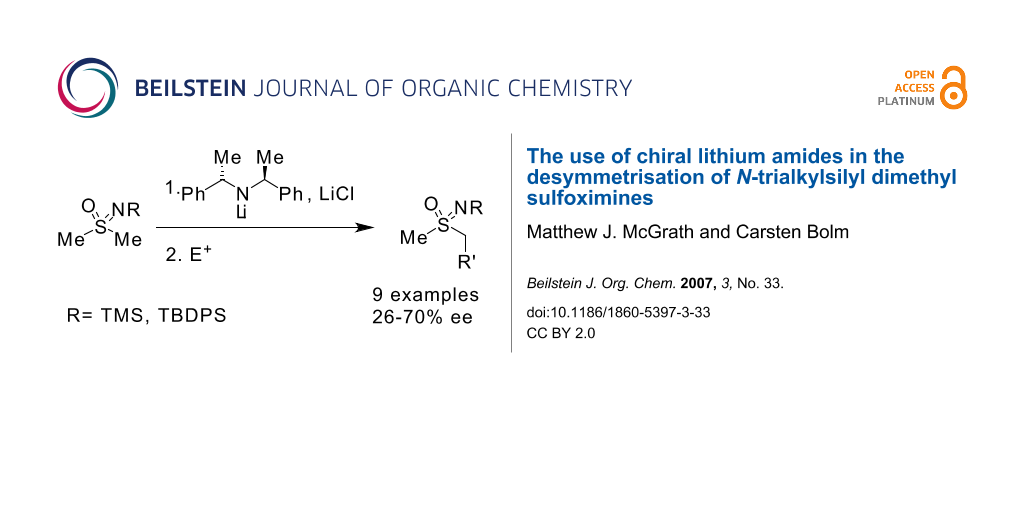