Bromine–lithium exchange: An efficient tool in the modular construction of biaryl ligands


All articles from this author
Frédéric R. Leroux


All articles from this author
Françoise Colobert

Regioselective bromine–lithium exchange reactions on polybrominated biaryls enable the modular synthesis of various polysubstituted biphenyls such as bis(dialkylphosphino)-, bis(diarylphosphino)- and dialkyl(diaryl)phosphinobiphenyls. All permutations of substituents at the ortho positions of the biphenyls are possible. In a similar manner, one can gain access to monophosphine analogues. So far, such a process, based on the effective discrimination between bromine atoms as a function of their chemical environment, has been observed only sporadically.

Atropisomeric biaryls are important compounds in various fields. In particular, pharmaceuticals and agrochemicals with biaryl substructures are of general interest [1]. In addition, they have widespread applications as ligands in catalysis, or in materials sciences [2]. The atropisomeric C2-symmetric binaphthyl- or biphenyl-bridged diphosphine ligands BINAP [3], H8-BINAP [4], BIPHEMP [5], MeO-BIPHEP [6], SEGPHOS [7-9], P-Phos [10], SYNPHOS [11,12], Cn-TUNAPHOS [13] and DIFLUORPHOS [14-16] and their analogues are well known as highly efficient chiral ligands for a variety of transition metal-catalyzed asymmetric transformations. The biphenyl backbone has the advantage that substituents at the 6- and 6'-positions can affect the dihedral angle of the biphenyl backbone, one of the key factors for ligand efficiency. Both the aryl phosphorus substituents and the biphenyl backbone can be tailored in order to modify the stereoelectronic profile of a ligand.

Most frequently, biaryls are prepared through transition metal-catalyzed reactions of suitable functionalized starting materials [17-22]. Although these methods are well established, alternatives are investigated in order to avoid expensive transition metals or ligands, which are especially required for the coupling of deactivated or sterically hindered substrates.

Our group is developing new methods towards the synthesis of highly functionalized atropisomeric biphenyls [23-32]. We seek to perform their synthesis (a) in a modular way starting from a few common and easily available precursors; (b) with a high degree of structural diversity; (c) in a straightforward, short, reproducible manner; (d) in high yield and on multigram scale; and, last but not least, (e) with a restricted use of transition metals and ligands.

Polar organometallic chemistry [33-35] allows the performance of highly selective reactions. Therefore, it seemed to us the ideal tool to reaching this goal. In this context, we recently developed a novel transition metal-free aryl–aryl coupling protocol, the "ARYNE-coupling", which allows the preparation of di-, tri-, and even tetra-substituted ortho,ortho'-dibromobiphenyls [25,28,31,36-38]. These have the advantage that, by means of successive or simultaneous bromine–lithium exchanges, a huge panel of substituents can be introduced into the biphenyl backbone.

The bromine–lithium exchange reaction is certainly one of the most fundamental synthetic transformations [39]. Although this reaction was reported by C. S. Marvel in 1927 [40], G. Wittig [41] and H. Gilman [42-44] were the first to apply it in organic synthesis in the late thirties. Since then, this reaction has been considered as a mature method lacking both appeal and surprise [33], and only new applications of this reaction or mechanistic studies have been reported [30,32,33,45-55]. However, in the last few years, the halogen–metal permutation has recaptured its former role as one of the most important and versatile methods in organic synthesis. New exchange reagents, such as isopropylmagnesium chloride, its LiCl complex [53-61] and lithium tributylmagnesate [62,63], have been developed and allow reactions under noncryogenic conditions [64-66]. New access routes to synthetically challenging aryl halide precursors have been devised.

Herein, we report on the preparation of C1 analogues of the most efficient and popular C2-symmetric biphenyl ligands. We will show that by means of regioselective bromine–lithium exchanges all possible permutations of bis(diaryldiphosphino)-, bis(dialkylphosphino)- and dialkyl(diaryl)phosphinobiphenyls become feasible. In a similar way, biphenyl-based monophosphine ligands were also obtained (Figure 1).

The intriguing question is whether one bromine would be exchanged preferentially on the substrate when the bromine atoms are not activated by adjacent heteroatoms. An effective discrimination between two bromine atoms as a function of their chemical environment has so far been observed only sporadically in such processes [30,34,35,51,52,70-72].

Fortunately, the reaction occurred exclusively on the doubly halogenated ring when 2,2',6-tribromobiphenyl [28,38], obtained almost quantitatively by the ARYNE coupling protocol, was submitted to the bromine–lithium exchange reaction. When 2,2',6-tribromobiphenyl (1a) [28] was treated at −78 °C with BuLi and the intermediate aryllithium trapped with iodomethane, 2,2'-dibromo-6-methylbiphenyl (1b) was obtained in an excellent yield of 96%. Analogously, when benzenesulfonylazide was used as an electrophile, 2-azido-2',6-dibromobiphenyl was obtained. The use of lithium aluminium hydride in ether at reflux for 4.5 h gave exclusively 2-amino-2',6-dibromobiphenyl, which was submitted to a reductive methylation by means of formaldehyde and sodium cyanoborohydride. 2-N,N-Dimethylamino-2',6-dibromobiphenyl (1c) was obtained in an overall yield of 79% in 3 steps (Scheme 1). To introduce the methoxy group, 2,2',6-tribromobiphenyl (1a) was successively subjected to lithiation, borylation with fluorodimethoxyborane·diethyl ether, followed by oxidation with hydrogen peroxide and O-methylation with iodomethane in acetone. 2,2'-Dibromo-6-methoxybiphenyl (1d) was finally obtained in a very good global yield of 68% in 3 steps. Finally, we proposed to introduce the phenyl ring (1f, 95%) by a regioselective Suzuki–Miyaura coupling via the iodo derivative 1e, the latter being obtained in 83% yield after trapping with iodine.

Similarly, as shown for 2,2',6-tribromobiphenyl (1a), when 6-substituted 2,2'-dibromobiphenyls 1b–e were treated with just one equivalent of butyllithium in tetrahydrofuran at −78 °C, another regioselective bromine–lithium exchange occurs on the functionalized ring (Scheme 2). Trapping with iodomethane afforded the biphenyls 2 in high yield and perfect regioselectivity, except for R = Ph (1f) and the benzodioxole derivative (1i), where the regioselectivity was slightly lower (91:9 and 92:8, respectively).

M. Schlosser and J. Gorecka-Kobylinska recently reported on the relative basicities of aryllithiums bearing methoxy, chlorine, fluorine, trifluoromethyl and trifluoromethoxy substituents at the ortho, meta, and para positions. Equilibration studies of two aryllithiums of comparable basicity with the corresponding bromo- or iodoarenes allowed them to determine the "basicity" (protodelithiation) increments ∆∆G, derived from the equilibrium constants. The authors showed that the basicity increments are linearly correlated with the relative protonation enthalpies of the corresponding aryl anions in the gas phase. Compared with "naked" aryl anions, the basicity of aryllithiums mirrors the effects of ortho, meta, and para substituents to the extent of 36%, 30%, and 25%, respectively [73].

These results explain the difference in regioselectivity of the bromine–lithium exchange, between a bromine atom residing on a phenyl ring that bears a "stabilizing" substituent at a remote meta position and a bromine atom on an "unstabilized" phenyl ring.

In the following section we will show how a large family of biaryl mono- and diphosphines becomes readily accessible through these common building-blocks. The general access is depicted in Figure 3.

From the methylated intermediates 2a–d, new monophosphines became accessible in one additional step (Scheme 3). The bromine–lithium exchange was either performed with just one equivalent of butyllithium in tetrahydrofuran at −78 °C (conditions a) or in toluene at 0 °C (conditions b). After cooling to −78 °C, the lithiated intermediate was then allowed to react with a solution of ClPCy2, or ClPPh2 in toluene. In these cases, the monophosphines 3 were obtained in good yields (Scheme 3).

In order to synthesize mixed diphosphines, we took advantage of the non-equivalence of the two phenyl rings towards lithiation. We started from the same dibromobiaryls 1 as before, but submitted them now to just one equivalent of butyllithium in THF. The aryllithium intermediate was then trapped with one equivalent of ClPCy2. The resulting monophosphine 4 was isolated and then submitted to a second bromine–lithium exchange in toluene followed by addition of ClPPh2 (Scheme 4). The lithiation–phosphination sequence was not substrate-dependent and reaction conditions were the same for all the different ortho substituents. In this way, pure ligands were obtained on a gram scale.

In order to gain access to bis(dicyclohexylphosphino)biphenyls 3, a double bromine–lithium exchange was performed on the 2,2'-dibromobiaryls 1. A screening of the reaction conditions revealed higher yields for the double phosphination when the bromine–lithium exchange and trapping with ClPCy2 were carried out in toluene rather than in THF and at higher temperature. For example, with R1 = Me, OCF2O, and OCF2CF2O, the corresponding diphosphines were obtained in a yield of 54% (in toluene) versus 12% (in THF), 53% versus 36% and 73% versus 35%, respectively (Table 1, entries 1, 2, 9, 10, 11 and 12). A series of bis(dicyclohexylphosphino)biphenyls 6 was obtained in good yield. However, we noticed lower yields for biaryls carrying α-fluorinated ether substituents, such as OCF2O (53%; Table 1, entry 9) or OCF3 (33%; Table 1, entry 14), in comparison with their nonfluorinated counterparts, OCH2O (70%; Table 1, entry 8) and OMe [30] (74%; Table 1, entry 5).

In the case of 2-N,N-dimethylamino-2',6-dibromobiphenyl (1c), higher yields were obtained when the double bromine–lithium exchange was realized successively instead of simultaneously. Indeed, the double phosphination in THF or toluene gave the corresponding ligand in a very poor yield (Table 1, entries 3 and 4). When the first Br–Li exchange was carried out in THF at −78 °C, followed by trapping with ClPCy2, the corresponding monophosphine 7 was obtained in a good yield of 63%. The second Br–Li exchange was performed in toluene at 0 °C, affording ligand 6c in a moderate yield of 44% after trapping with ClPCy2 (Scheme 5).

When the ortho,ortho'-dibromobiphenyls 1 were submitted to a double bromine–lithium exchange in THF followed by trapping with two equivalents of ClPPh2, whatever the nature of the ortho substituent (R = Me, OMe, NMe2, Cl, OCF3, Ph, OCH2O, OCF2O, OCF2CF2O, H, F), the formation of an intramolecular cyclization product, a dibenzophosphole, was exclusively observed. This is consistent with the observations of O. Desponds et al. [75]. However, when THF was replaced by toluene, the outcome of the reaction could be modified in favor of the 2,2'-bis(diphenylphosphino)biphenyls 8 [27] which were still contaminated with varying amounts of phosphafluorenes 9 and triphenylphosphine (Table 2).

In the present work, we showed how completely regioselective bromine–lithium exchange reactions on polybrominated biphenyls allow the construction of a new family of di- and monophosphine ligands. The required polybrominated biphenyls can be easily obtained through an efficient transition metal-free aryl–aryl coupling protocol developed by our group. The regioselectivity can be explained by recent equilibration studies of M. Schlosser et al. which allowed the determination of ∆∆G increments for substituents at the ortho, meta, and para positions.

Overall, the methodology presented in this study offers the possibility to consider new pathways for the synthesis of more sophisticated biaryl scaffolds. Catalytic studies as well as the control of biaryl axial chirality are currently underway and will be reported in due course.

We thank the CNRS and the Ministère de la Recherche of France. We are very grateful to LONZA AG, Switzerland for a PhD grant for L.B. We also thank Dr. Lydia Brelot, Université de Strasbourg, for single crystal X-ray analysis.

© 2011 Bonnafoux et al; licensee Beilstein-Institut.
This is an Open Access article under the terms of the Creative Commons Attribution License (http://creativecommons.org/licenses/by/2.0), which permits unrestricted use, distribution, and reproduction in any medium, provided the original work is properly cited.
The license is subject to the Beilstein Journal of Organic Chemistry terms and conditions: (http://www.beilstein-journals.org/bjoc) 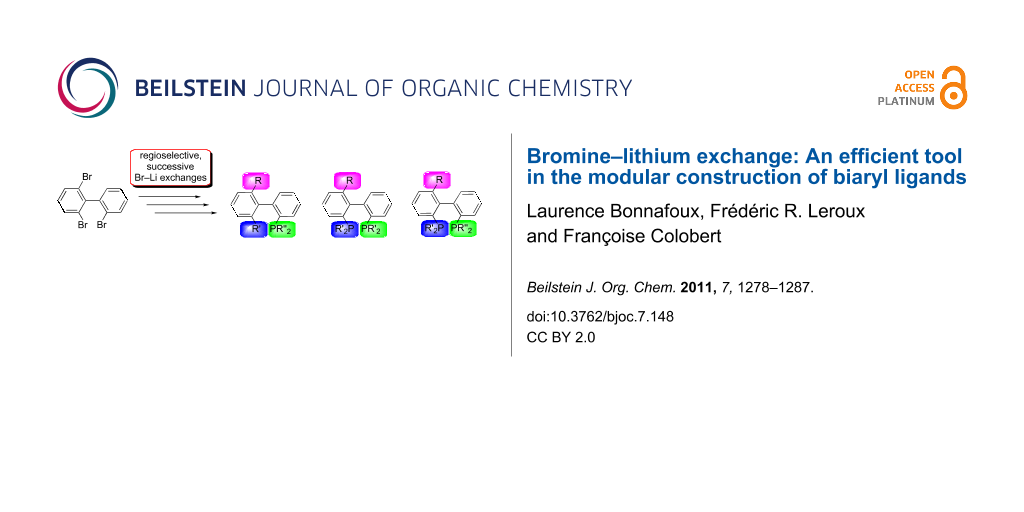