All articles from this author
Takeshi Naito


All articles from this author
Shū Kobayashi

Continuous flow systems for hydrogenation using polysilane-supported palladium/alumina (Pd/(PSi–Al2O3)) hybrid catalysts were developed. Our original Pd/(PSi–Al2O3) catalysts were used successfully in these systems and the hydrogenation of unsaturated C–C bonds and a nitro group, deprotection of a carbobenzyloxy (Cbz) group, and a dehalogenation reaction proceeded smoothly. The catalyst retained high activity for at least 8 h under neat conditions.

Catalytic hydrogenation is one of the most important methods for the reduction of C–C double and triple bonds, and other functional groups. Heterogeneous catalysts including Pd/C, Pt/C and Pd/SiO2 are commonly used in reduction reactions both in research and industrial environments because of the ease of separation of the catalysts and products. However, the contamination of products as a result of leaching of metals from supports as well as the decreased catalytic activity, are both serious problems with the use of conventional heterogeneous catalysts. To address these problems, we recently developed novel methods for the immobilization of metal and non-metal catalysts on supports. This involved the development of microencapsulated (MC) and polymer-incarcerated (PI) catalysts, which have high catalytic activity without causing metal leaching [1].

Heterogeneous catalytic hydrogenation in a batch system has recently been applied to continuous flow hydrogenation systems for high-throughput synthesis [2-10]. There are several problems associated with conducting heterogeneous catalytic hydrogenation in a batch system. These include the necessity for filtration of hydrogen-saturated pyrophoric catalysts from flammable solvents, the possible requirement to use hydrogen gas under high pressure, difficulties in the re-use of catalysts (or inability for their re-use), the need for vigorous stirring to achieve catalytic activity, and the possible necessity for longer reaction times, which may lead to undesirable side reactions or harsh reaction conditions. Continuous flow systems have the potential to overcome these problems and disadvantages. In our laboratory, PI catalysts were applied to tri-phase hydrogenation reactions in a microreactor system and led to markedly shorter reaction times [11]. While the productivity of a single microreactor is low, increasing the number of reactors (“numbering up”) could readily and substantially increase production.

We also recently reported novel transition metal catalysis involving the immobilization of Pd or Pt onto polysilane supports by the microencapsulation method [12]. The Pd catalyst (Pd/PSi) had high activity with no or very little leaching of Pd, and it could be recovered and re-used in hydrogenation reactions in batch systems. We then developed polysilane-supported Pd/metal oxide hybrid catalysts [13] using the PI method (microencapsulation and cross-linking), which were then applied in these microreactor systems [14]. The hybrid catalysts were insoluble, did not swell in any solvent, and were predicted to be applicable to continuous flow reactors. In this study, we investigated hydrogenation reactions of C–C double and triple bonds as well as various other functional groups using continuous flow systems with Pd/(PSi–Al2O3) catalysts.

A schematic diagram of the continuous flow reactor and an image of the top of the column are shown in Figure 1. A high performance liquid chromatography (HPLC) pump was used to feed the substrate into the central hole in the top of the column, which was filled with the Pd/(PSi–Al2O3) catalyst. Hydrogen gas was introduced into the six holes surrounding the central hole using a mass flow controller. The column was heated in a water bath as required. The substrate reacted with the H2 gas inside the column, and the product was collected downstream of the column.

We initially examined the hydrogenation reaction of ethyl cinnamate (Scheme 1) and collected the product for 8 h without contamination of the starting material. This demonstrated that the catalyst retained high activity for at least 8 h, and the turnover number (TON) reached 8700.

We then investigated the hydrogenation of other substrates. The hydrogenation reactions of C–C double and triple bonds in various substrates are shown in Table 1; these proceeded quantitatively at room temperature under neat conditions. The products were obtained at approximately 10 g/h through the 4 cm3 column.

We then investigated the hydrogenation of a nitro group (nitrobenzene) and the deprotection of a carbobenzyloxy (Cbz) group (Scheme 3). The hydrogenation reaction of nitrobenzene proceeded quantitatively under neat conditions, and the deprotection of Cbz–Ser also proceeded quantitatively in a mixed solvent system (EtOH/H2O 1:4).

Hydrogenation reactions could also be carried out successfully in water (Scheme 4). The reduction of aqueous maleic acid proceeded quantitatively. Dehalogenation of p-chlorobenzoic acid in basic aqueous solution also proceeded smoothly and benzoic acid was obtained after acid treatment. In the case of p-chlorophenol, the conversion was complete; however, in this case some by-product (5%) was also obtained.

In summary, we developed continuous flow systems for hydrogenation using a Pd/(PSi–Al2O3) catalyst. Our original Pd/(PSi–Al2O3) catalysts were successfully used in these systems. In the hydrogenation reactions studied, i.e., the reduction of unsaturated C–C bonds and a nitro group, deprotection of a Cbz group, and a dehalogenation reaction, all proceeded smoothly. The catalysts could be used for a long time, with high activity being retained for at least 8 h under neat conditions. It is noted that in all cases no Pd leaching was detected (ICP). Further studies of the application of these systems to large-scale production are now in progress.

Hydrogenation reaction of nitrobenzene (Scheme 3): Nitrobenzene was fed into the column (maintained at 70 °C in a water bath) using the HPLC pump (0.1 mL/min), and H2 gas was introduced into the column at a pressure of 0.15 MPa. The system was left to stabilize for 30 min and the product then sampled for 2.5 h. The sample (18.9 g as a mixture of aniline and H2O; calculated quantity of aniline = 13.7 g) was analyzed by GC, and the complete conversion of nitrobenzene to aniline was confirmed.

This work was partially supported by a Grant-in-Aid for Scientific Research from the Japan Society for the Promotion of Science (JSPS), Global COE Program, The University of Tokyo, MEXT, Japan, and NEDO.

Continuous-flow processes for the catalytic partial hydrogenation reaction of alkynes

© 2011 Oyamada et al; licensee Beilstein-Institut.
This is an Open Access article under the terms of the Creative Commons Attribution License (http://creativecommons.org/licenses/by/2.0), which permits unrestricted use, distribution, and reproduction in any medium, provided the original work is properly cited.
The license is subject to the Beilstein Journal of Organic Chemistry terms and conditions: (http://www.beilstein-journals.org/bjoc) 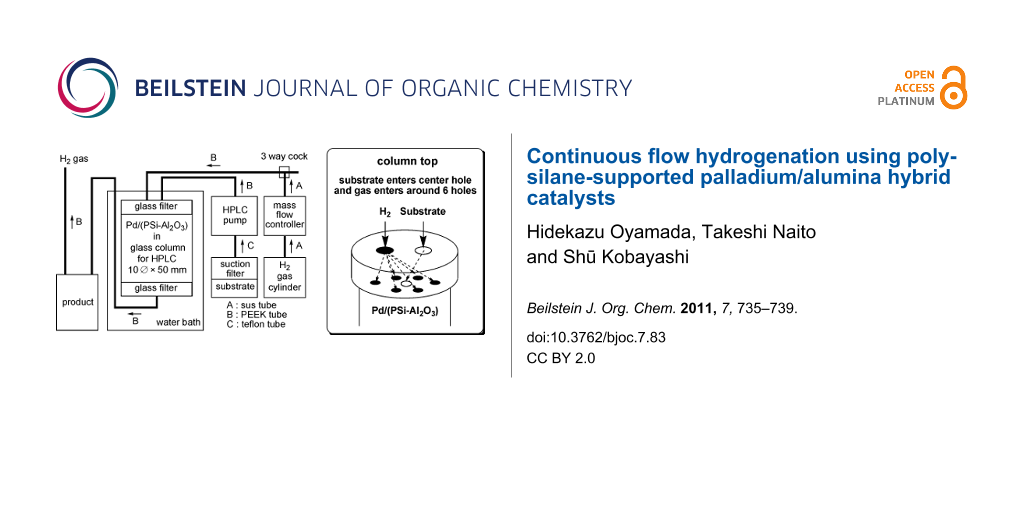