All articles from this author
Anna Chentsova


All articles from this author
Nicole Eilert


All articles from this author
Irene Rovardi


All articles from this author
Philipp Heretsch

The chemical synthesis and biological evaluation of new cyclopamine analogs bearing exocyclic methylenes in different positions is described. Bis-exo-cyclopamine 6 was identified as a potent inhibitor of the Gli1-dependent luciferase expression in Shh-LIGHTII cells. An extension of this study to F-ring-modified structures shows the necessity of a rigidly positioned nitrogen atom for bioactivity as well as the presence of the C21 methyl group for acid stability and bioactivity.

Hedgehog signaling is involved in embryonic development and plays an important role in the maintenance of stem cells, tissue repair and regeneration in adult organisms [1-4]. The erroneous activation of hedgehog signaling is tightly associated with the occurrence of basal cell carcinoma and medulloblastoma [5]. In addition, several other tumors are co-dependent on hedgehog signaling, examples for this type are cancers of the skin [6,7], brain [8,9], lung [10], pancreas [11], breast [12], prostate [13,14], colon [15], rhabdomyosarcoma [16], lymphoma [17-19], multiple myeloma [17,20], and chronic myeloic leukemia [21-23]. More recently, other diseases like diabetes [24,25], neurodegenerative disorders [26], and trisomy [27,28], have been linked with hedgehog signaling.

Cyclopamine (1, see Figure 1) was the first inhibitor of the hedgehog signaling pathway to be identified. As a highly selective inhibitor of the transmembrane protein Smoothened (Smo), an integral component of hedgehog signaling, it presents an attractive target for medicinal and pharmaceutical research [29,30]. Unfortunately, its direct development into a drug is hampered by its low metabolic stability (decomposition at pH < 3) [31] and rather moderate potency (IC50 ~ 5 µM).

We previously reported the first chemical synthesis of cyclopamine (1) starting from dehydroepiandrosterone and utilizing the C–H-functionalization logic and a biomimetic skeleton rearrangement [32,33]. Furthermore, quantum mechanical calculations guided our design and synthesis of exo-cyclopamine (2, see Figure 1), a ten-fold more potent and acid-stable analog with an exo-methylene unit at C13–C18 [34]. Herein, we describe a comprehensive study of cyclopamine analogs bearing exo-methylene units in different positions and extent this rational to F-ring-modified structures.

Our synthetic approach to the analogs described here started from previously reported azide 3 which was converted in six steps [32] to the protected bis-exo-methylene compound 4. Carefully chosen conditions for the deprotection of the benzyl ether (DDQ, DCE/pH 7 phosphate buffer, 40 °C, 86%) and the benzenesulfonylamine (sodium naphthalenide, DME, −78 °C, 79%) allowed for the isolation of bis-exo-cyclopamine 6 in 18% overall yield from 3. The hydrogenation of intermediate 4 by using Wilkinson’s catalyst in benzene yielded previously described exo-cyclopamine 2 and its C25 epimer 5. Deprotection with Raney-nickel (EtOH, 78 °C) and then sodium naphthalenide (DME, −78 °C, 41% over two steps) furnished 25-epi-exo-cyclopamine 5 in 3% overall yield from 3.

A first set of exo-cyclopamine analogs with a modified F-ring was obtained starting again from azide 3 (see Scheme 1). Reduction of the lactone moiety to give a tetrahydrofuran was accomplished in three steps including (1) partial reduction to the lactol (DIBAl-H, THF, −78 °C to −60 °C, 95%), (2) acetylation (Ac2O, pyridine, cat. DMAP, quant.) and (3) reductive removal of the so-obtained acetate (Et3SiH, BF3·Et2O, −78 °C to −20 °C, 79%). Removal of the benzyl ether, reduction of the azide moiety and concomitant alkylation was then all effected in one pot by using Raney-nickel in EtOH to give analog 8, an F-ring-opened exo-cyclopamine derivative in 27% overall yield from 3. Alternatively, the use of previously devised conditions for benzyl deprotection (DDQ, DCE/pH 7 phosphate buffer, 45 °C, 78%) and then sodium borohydride-mediated reduction of the azide (EtOH, 65 °C, 62%) cleanly furnished primary amine 9, an exo-cyclopamine derivative with no F-ring (35% overall yield from 3).

Next, we examined all synthesized compounds for their ability to inhibit the Gli1-dependent luciferase expression in Shh-LIGHTII cells, a clonal mouse fibroblast cell line which stably incorporates a Gli-dependent firefly luciferase reporter and a constitutive Renilla luciferase reporter [37]. The compounds were tested in a concentration range from 0.01 μM to 10 μM. While analogs 8, 9, and 19 showed no activity (data not shown) in this concentration range, 5, 6, and 23 were active with 25-epi-exo-cyclopamine 5 having an IC50 of 3.29 ± 0.31 μM, F-nor-20,25-bis-demethyl-exo-cyclopamine 23 of 6.4 ± 0.9 μM, and bis-exo-cyclopamine 6 being the most active with an IC50 of 0.20 ± 0.01 μM (see Figure 2).

Given the negative test results of compounds 8 and 9 it becomes evident that the F-ring is necessary for bioactivity. The piperidine moiety provides a rather rigidly placed nitrogen atom. Nevertheless, a pyrrolidine as in compound 23 still provides the correct orientation of the nitrogen atom. Despite compounds 8 and 9 being inactive in the assay, both derivatives induced cytotoxicity in the concentration range tested. Very subtle changes of the conformation of the piperidine ring significantly change bioactivity: While 25-epi-exo-cyclopamine 5 shows reduced activity in comparison to exo-cyclopamine 2, bis-exo-cyclopamine 6 is the most active compound tested in this study. Furthermore, the methyl group at C-20 seems to have a pronounced effect on the bioactivity, with 20-demethyl-bis-exo-cyclopamine 19 being completely inactive in the tested concentration range.

Finally, we studied the stability of all newly synthesized compounds towards acidic conditions. Therefore, they were exposed to a pH of approximately 1 (MeOH, 1 M HCl) for 24 h. After evaporation of all volatiles, 1H NMR spectra were acquired and compared to the initially obtained spectra of the pure compounds. While compounds 5, 6, 8, and 9 remained unchanged, compounds 19 and 23 showed decomposition. This experiment emphasizes the importance of the C-21 methyl group for the stability of exo-cyclopamine derivatives. All synthesized compounds, the number of steps required, and the respective overall yield starting from 3 or 14, as well as their biological activity and stability under acidic conditions are summarized in Table 1.

In conclusion, we succeeded in identifying the new cyclopamine derivative bis-exo-cyclopamine 6 which surpasses the biological potency of the parent compound by the 25-fold and is stable at pH 1. Further insights were gained into the structure–activity relationship of F-ring-modified analogs of cyclopamine and the necessity of the C-21 methyl group for bioactivity and acid stability was revealed. Our designed analogs of cyclopamine are accessible in noticeably shorter and higher yielding synthetic routes than the parent compound, a fact that will further contribute to their usefulness in biological and medicinal studies.

We thank Dr Lothar Hennig for recording NMR spectra and for his help in interpreting the 2D NMR spectra.

© 2013 Moschner et al; licensee Beilstein-Institut.
This is an Open Access article under the terms of the Creative Commons Attribution License (http://creativecommons.org/licenses/by/2.0), which permits unrestricted use, distribution, and reproduction in any medium, provided the original work is properly cited.
The license is subject to the Beilstein Journal of Organic Chemistry terms and conditions: (http://www.beilstein-journals.org/bjoc) 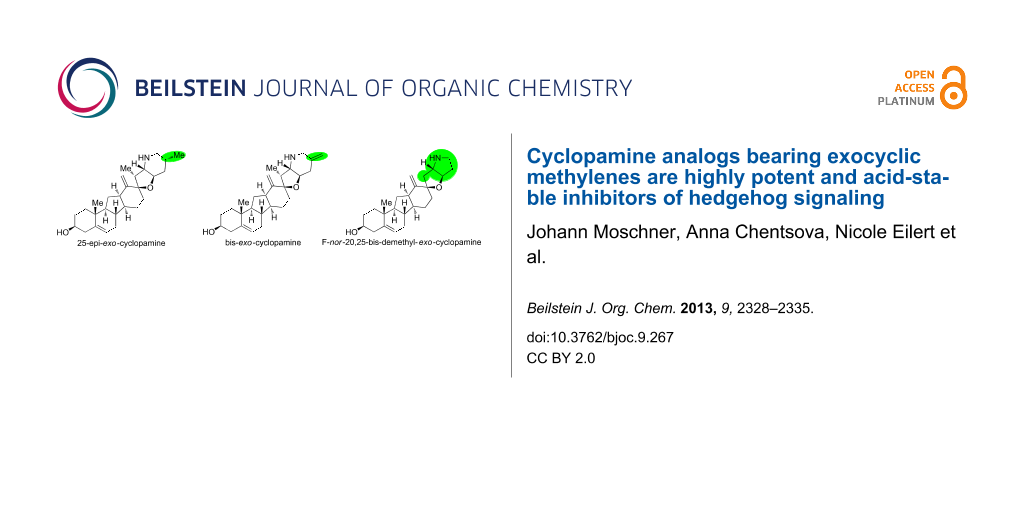