All articles from this author
Kevin Ollivier


All articles from this author
Thierry Billard

The CF3SN moiety is a substituent with interesting properties. However, there is no easy synthetic access to molecules bearing this group. The trifluoromethanesulfenamide is a new reagent for the electrophilic trifluoromethylthiolation which reacts easily with amines to obtain trifluoromethylsulfanylamines with good yields.

In past decades, fluorinated molecules have found more and more applications in a variety of fields, especially in the design of new compounds for medicinal chemistry or agrochemistry [1-9]. More recently, new substituents have emerged which associate the trifluoromethyl group with heteroatoms such as CF3O or CF3S. Because of its high hydrophobicity (Hansch parameter πR = 1.44), the CF3S moiety is of particular interest [10]. Compounds with this group constitute important targets for applications in pharmaceuticals and agrochemicals [4,11-13].

The association of a CF3 group to more than one heteroatom is rarely described in literature. In particular, there are only a few investigations regarding the trifluoromethylsulfanylamine moiety (CF3SN). However, this group has found applications in agrochemical and medicinal chemistry [14-20]. From a physicochemical point of view, the CF3SN group possesses a Hansch’s hydrophobicity parameter πR = 1.50 [21]. This value, slightly superior to the Hansch’s hydrophobicity parameter of the CF3S group, could be of great interest in the development of biological active compounds. Yet, the common synthetic route to these compounds use the highly toxic and gaseous CF3SCl [16,22-35].

Several years ago, we have described an easy access to trifluoromethanesulfenamides [36], starting from DAST, Ruppert reagent, and primary amines [37]. However, even though this strategy gave good results with primary amines, secondary amines do not react under these conditions, thus limiting the access to a large panel of trifluoromethylsulfanylamines. The trifluoromethanesulfenamide 1a is an efficient reagent for the electrophilic trifluoromethylthiolation of carbon nucleophiles [38-44]. Therefore, this reagent should react with amines to perform transamination reactions with secondary amines leading to various trifluoromethylsulfanylamines 3. The reaction has been optimized with phenylpiperazine (2a) (Table 1).

After preliminary deprotonation of 2a with BuLi, the trifluoromethanesulfenamide 1a is added. The expected product 3a is obtained in 15 min with good yield. To improve the kinetic of the reaction, the deprotonation and the transamination should be performed at 0 °C (Table 1, entries 1 and 2). Longer reaction times do not increase the yield, the reaction seems to be finished in 15 min (Table 1, entries 2 and 3). As previously observed in other works, the use of other bases with sodium or cesium cations is not efficient since only Li is a Lewis acid strong enough to activate 1a [38,44]. These optimal conditions have been extended to selected amines 2 (Figure 1).

The reaction gives, in general, good yields with various secondary amines (3a–k). Because of their high volatility, some compounds (3h and 3i) have not been isolated. Imines can be also trifluoromethylthiolated in good yields (3m). Even if our first developed method is compatible with primary amines [37], they can also react under these new conditions, as illustrated with the aniline (3n).

Amino alcohols and bis-amines can also be trifluoromethylthiolated, with the most nucleophile atom as a target (Figure 2). In this case, 2.1 equiv of BuLi are required and reaction times are loner (20 h).

This new method was applied to synthesize a trifluoromethylthio analog (3l) of the well-known tricyclic antidepressant imipramine (Figure 3). Since the pentafluoroethyl analog 1b of reagent 1a has also been described previously, a pentafluoroethylthio analog of imipramine was synthesized (4l) (Figure 3). In the latter case, the obtained yield was lower, certainly due to the steric hindrance of the CF3CF2S moiety. The pharmacological properties of these new compounds are under investigation.

In conclusion, the trifluoromethanesulfenamide 1a is a very efficient reagent for the electrophilic trifluoromethylthiolation which can also react with amines to open a new access to trifluoromethylsulfanylamines. These compounds belong to a new class of products which may exhibit interesting properties for further applications – in particular in medicinal chemistry – owing to the characteristics of the CF3SN moiety.

We thank the CNRS for their financial support. The French Fluorine Network is also thanked for its support.

© 2013 Alazet et al; licensee Beilstein-Institut.
This is an Open Access article under the terms of the Creative Commons Attribution License (http://creativecommons.org/licenses/by/2.0), which permits unrestricted use, distribution, and reproduction in any medium, provided the original work is properly cited.
The license is subject to the Beilstein Journal of Organic Chemistry terms and conditions: (http://www.beilstein-journals.org/bjoc) 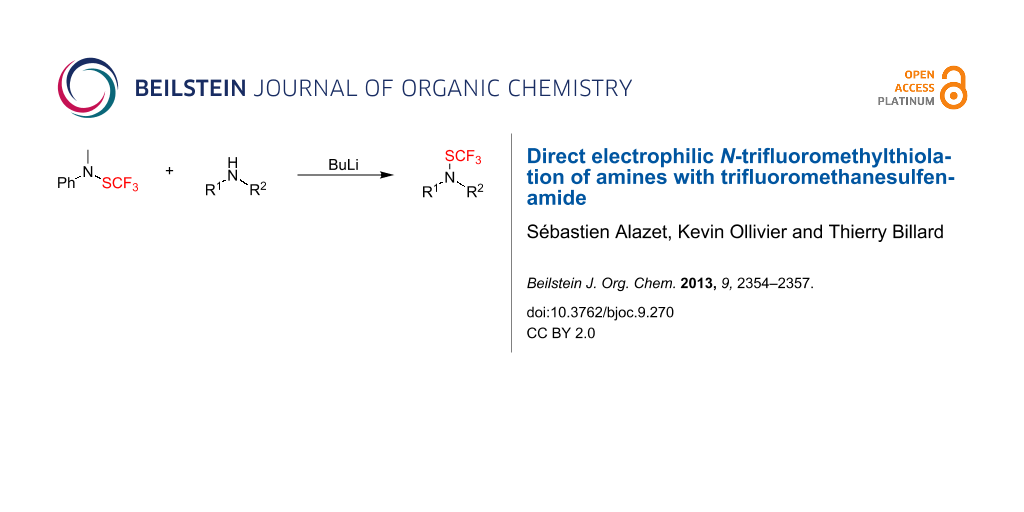