A computational study of base-catalyzed reactions of cyclic 1,2-diones: cyclobutane-1,2-dione


All articles from this author
Walter M. F. Fabian

The reaction of cyclobutane-1,2-dione with hydroxide was studied by a variety of ab initio (MP2, SCS-MP2, CCSD(T), CEPA/1) and density functional (M06-2X) methods. Three possible reaction paths of the initially formed tetrahedral adduct leading to either 1-hydroxycyclopropane-1-carboxylate (benzilic acid type rearrangement, path A), α-oxobutanoate (path B) or γ-oxobutanoate (path C) were considered. Although the latter two products show similar or even more negative Gibbs free energies of reaction than calculated for the benzilic acid type rearrangement, the Gibbs free energies of activation are substantially higher. According to the calculations, the only feasible reaction appears to be the formation of 1-hydroxycyclopropane-1-carboxylate, which is corroborated by previous experimental observations.

Addition of nucleophiles, e.g., OH–, to 1,2-dicarbonyl compounds leads to the formation of relatively stable tetrahedral adducts (Scheme 1) [1]. These adducts further react either by (i) fission of the R2–C bond and migration of R2 (benzil–benzilic acid rearrangement, path A); (ii) fission of the R2–C bond without migration of R2 resulting in α-oxocarboxylic acids (path B); or (iii) fission of the carbonyl-C–sp3-C with formation of an aldehyde and carboxylic acid (path C). In the case of benzils, depending on the substituents on the aryl rings, all three types of reactions have been observed [2].

In view of the importance of the benzil–benzilic acid rearrangement in organic chemistry, several computational studies concerning this rearrangement [10,11] or related reactions (Favorskii rearrangement [12-14], halolactonisation [15]) have been published. To the best of our knowledge no attempt has been made so far to consider the additional pathways B and C in these reactions. Here we present a detailed computational study (DFT and ab initio) of the base-catalyzed reactions of cyclobutane-1,2-dione (1) taking into account all three possible pathways.

The various transition states, intermediates and products initially considered for the three reaction paths A, B, and C are depicted in Scheme 3. It turned out that not all of the structures shown in Scheme 3 could actually be located as stationary points on the potential-energy surface. On the other hand, some other stable as well as highly reactive intermediates and/or transition states were obtained (see below). Generally, in nucleophilic addition reactions to carbonyl compounds in aqueous solution, water not only acts as a solvent but frequently actively participates in the reaction, such as in water-assisted hydrolysis [16-20] or also in the benzil–benzilic acid rearrangement [11]. Therefore, cyclobutane-1,2-dione (1) hydrated by two water molecules, and hydroxide ion hydrated by four, i.e., 1·(H2O)2 and [OH(H2O)4]– , were used as reactants. Hence for all transition states, intermediates and products shown in Scheme 3, hydration by six water molecules is implied.

Taking the CEPA/1 results as a reference, inspection of Table 1 reveals that all other computational procedures invariably lead to a greater stabilization of all stationary points considered with respect to the separated reactants. The largest deviation from the CEPA/1 energies is obtained with M06-2X, the smallest with SCS-MP2. The corresponding mean absolute deviations and RMS errors are 5.9, 6.3 (M06-2X); 3.6, 3.9 (MP2); 2.5, 2.9 (SCS-MP2); and 3.9, 4.0 (EC). However, the predicted trends agree very well with that obtained with CEPA/1 [Supporting Information File 1; the corresponding correlation coefficients R2 are 0.992 (M06-2X); 0.997 (MP2 and SCS-MP2); and 0.999 (EC)]. Inclusion of an empirical dispersion correction (DFTD3 [28]) in the M06-2X results further lowers the relative energies by ca. 0.8 kcal mol–1.

Figure 1 summarizes the energetic as well as structural aspects of all three possible reaction paths in the reaction of cyclobutane-1,2-dione with hydroxide anions.

Addition of neutral nucleophiles to carbonyl compounds generally proceeds via formation of a prereaction complex; if Gibbs free energies instead of pure electronic energies or enthalpies are considered, such complexes usually become unstable [29]. In the present case without inclusion of bulk solvation effects (Supporting Information File 1) this prereaction complex (ion–dipole complex IDC) is quite stable with ΔG = –14 to –19 kcal mol–1 compared to the separated reactants. However, especially the large calculated [SMD-M06-2X/6-31G(d)] solvation energy of [OH(H2O)4]– compared with that of the ion–dipole complex (ΔGsolv = –66 versus –54 kcal mol–1) results in an endergonic formation of this complex (ΔG = 2.5–7.3 kcal mol–1, Table 1). After passing transition state TS1 (ν = 144 i cm–1), formation of the tetrahedral adduct by attack of [OH(H2O)4]– at C1 leads to the first truly stable intermediate Int1. This intermediate is common to all further possible pathways. The nucleophile involved in the formation of Int1 actually is a water molecule, since formation of the C1–O3 bond is accompanied by proton transfer H3 to O4 of the original hydroxide anion (Figure 2). An analogous concerted addition–proton transfer has also been calculated previously for the benzilic acid type rearrangements of biacetyl and benzil [11]. Car–Parrinello molecular dynamics simulations of the hydrolysis of formamide in basic solution indicated that the traditional view of attack by hydroxide anion rather than a first-solvation-shell water molecule is more likely; however, the more powerful electrophile methyl formate should react according to the general-base mechanism [30]. The second carbonyl group in 1,2-diones efficiently enhances the carbonyl reactivity to make attack by water the preferred mode of reaction.

With respect to intermediate Int1, the Gibbs free energy of activation of the benzilic acid rearrangement (fission of the C1–C4 and concerted formation of the C2–C4 bond) via TS2 (ν = 246i cm–1) is ca. 15 kcal mol–1. The initial product P1a (1-carboxycyclopropanolate) is expected to easily convert to the final product 1-hydroxycyclopropanecarboxylate (2) by a simple acid–base equilibrium (protonation of the alcoholate, deprotonation of the carboxylic acid, ΔpKa ~ 10). Overall, path A is not only strongly exergonic [ΔGreact = –24.4 (CEPA/1) to –33 kcal mol–1(M06-2X)] but has also a quite low barrier [ΔG≠ = 6.9 (MP2) to 14.3 kcal mol–1(CEPA/1)], Table 1. Thus, this reaction should be quite feasible. Pertinent geometrical data are collected in Table S3 of Supporting Information File 1; M06-2X/6-31+G(d,p) optimized structures of relevant stationary points along path A are depicted in Figure 2.

Product P2 should be even more stable than 2. However, despite several attempts neither TS3 nor Int2 could be obtained. Instead, invariably TS2 or P1a were obtained. It is tempting to assume that the relatively close contact between C2 and C4 preferentially results in C2–C4 bond formation rather than addition of a proton to Int2. To address this problem, optimization of an extended conformation Int2’ was attempted. However, such a structure collapsed upon geometry optimization in a concerted proton transfer–nucleophilic addition reaction to intermediate Int2a. By a simple acid–base equilibrium (alcoholate–carboxylic acid → alcohol–carboxylate), this intermediate is expected to convert immediately to product P2a, i.e., the hydrate of product P2 (Scheme 4).

While all attempts to locate transition state TS3 as well as those ones leading to either Int2’ or Int2a were unsuccessful, a path [TS3a (ν = 410i cm–1, Scheme 3 and Figure 3] directly connecting P1a instead of Int1 with P2, could be obtained. Hence, path B actually does not start off from Int1 but diverges at the initially formed product P1a of path A.

Similar to path B, all attempts to locate the initially proposed intermediate Int3 were unsuccessful. Instead a more complicated pathway involving a high-energy bicyclic intermediate Int4 was found (Figure 4).

Furthermore, this intermediate did not react to product P3 but instead through a concerted ring opening and proton transfer to P3a. The anticipated product P3 of path C is a γ-oxocarboxylate. Such γ-oxocarboxylic acids or carboxylates are prone to ring–chain tautomerism [32,33]. Product P3a essentially is the ion-dipole complex between the ring tautomer of neutral γ-oxobutanoic acid with [OH(H2O)5]– , and hence, its formation is completely reasonable. The actual pathway C obtained by the calculations is indicated in Scheme 5.

Ab initio (MP2, SCS-MP2, composite energy approach EC, LPNO-CEPA/1) and density functional methods (M06-2X) were applied to study the reaction of cyclobutane-1,2-dione in basic solution. The reaction system was modeled by using cyclobutane-1,2-dione hydrated with two water molecules and [OH(H2O)4]– as the nucleophilic reagent. Three possible reaction pathways were considered, namely (i) a benzilic acid type rearrangement (path A); (b) ring-opening of the bond between an aliphatic carbon and that bearing the added OH– group (path B); and (c) fission of the bond between the carbonyl carbon and that bearing the added OH– group (path C). Attempts to locate path B starting directly from the tetrahedral intermediate Int1 were unsuccessful. Instead, a reaction sequence diverging from the initially formed product P1a of path A was found. Path C involved transformations via high energy bicyclic transition states and/or intermediates. The final products of these latter two paths have comparable (path C) or even substantially more negative reaction energies (path B). However, the corresponding Gibbs free energies of activation are quite large. With respect to Int1 these are at the CEPA/1 level 22.2 kcal mol–1 (path B; with respect to P1a ΔG≠ = 44.3 kcal mol–1) and 44.4 kcal mol–1 (path C). In contrast, path A is not only strongly exergonic but also has a significantly lower activation energy, ΔGreact = –22.2 kcal mol–1 and ΔG≠ = 16.5 kcal mol–1 with respect to Int1.

Hence, in agreement with experimental observations [5-7], cyclobutane-1,2-dione is calculated to react via benzilic acid rearrangement to the ring-contracted product, i.e., 1-hydroxycyclopropanecarboxylate (2).

Geometries were optimized by using the M06-2X density functional [22] and the 6-31+G(d,p) basis set [34,35] and characterized by frequency calculations as minima or transition states. For transition states, IRC calculations [36] were also done. These geometries were then used for M06-2X, MP2 [23] and SCS-MP2 [24] single-point calculations using the 6-311+G(2df,2p) basis set [37]. For coupled cluster CCSD(T) [38] and CEPA-1 [25-27] calculations the 6-31+G(d) and def2-QZVPP [39] basis sets, were used, respectively. Initial coordinates for [OH(H2O)4]– were taken from the WATER27 subset of the GMTKN30 database [40,41] and reoptimized with M06-2X/6-31+G(d,p). [OH(H2O)4]– was then placed about 6 Å above 1·(H2O)2 and the combined system again optimized, resulting in the ion-dipole complex. An initial structure for TS1 was obtained from a relaxed (i.e., optimization of all other coordinates) potential energy scan of the OH–carbonyl-carbon distance; this structure was then refined by transition-state optimization and further characterized by IRC calculations along both directions of the normal mode corresponding to the imaginary frequency. The final structures of both IRC calculations were then completely optimized. An analogous procedure, usually considering several possible reaction coordinates, was used for an initial guess of all other transition states. Bulk solvent effects (aqueous solution) were obtained by the SMD solvent model [21] at the M06-2X/6-31G(d) computational procedure. Frequencies obtained at the M06-2X/6-31+G(d,p) level are unscaled. Gibbs free energies are given relative to the separated reactants 1·(H2O)2 and [OH(H2O)4]– and contain a 1.9 kcal mol–1 correction for the standard state conversion 1 atm to 1 mol L–1 at T = 298.15 K. Dispersion corrections to the M06-2X results were added by Grimme’s DFTD3 procedure [28]. Programs used were ORCA [42], Gaussian 09 [43], GAMESS [44], and DFTD3 [45]; MOLDEN [46] and MOLEKEL [47] were used for structure building and visualization.

Nargis Sultana thanks the Higher Education Commission of Pakistan for the PhD scholarship.

Ring opening of 2-aza-3-borabicyclo[2.2.0]hex-5-ene, the Dewar form of 1,2-dihydro-1,2-azaborine: stepwise versus concerted mechanisms

© 2013 Sultana and Fabian; licensee Beilstein-Institut.
This is an Open Access article under the terms of the Creative Commons Attribution License (http://creativecommons.org/licenses/by/2.0), which permits unrestricted use, distribution, and reproduction in any medium, provided the original work is properly cited.
The license is subject to the Beilstein Journal of Organic Chemistry terms and conditions: (http://www.beilstein-journals.org/bjoc) 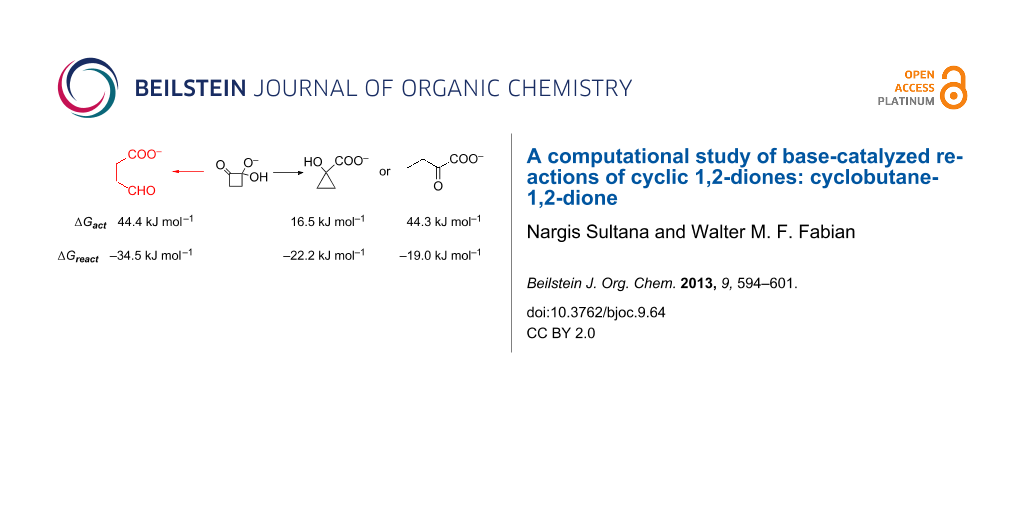