All articles from this author
Lee Belding


All articles from this author
Michael J. Katz


All articles from this author
Travis Dudding


All articles from this author
Robert Britton

A variety of ortho,ortho'-disubstituted hydrobenzoin derivatives are readily accessible through a directed ortho,ortho'-dimetalation strategy in which the alcohol functions in hydrobenzoin are deprotonated by n-BuLi and the resulting lithium benzyl alkoxides serve as directed metalation groups. The optimization and scope of this reaction are discussed, and the utility of this process is demonstrated in the one-pot preparation of a number of chiral diols as well as a short synthesis of the chiral ligand Vivol.

The discovery of new chiral ligands and auxiliaries continues to expand the frontiers of catalytic asymmetric synthesis. In particular, C2-symmetric diols, such as (S)-BINOL (1) [1] and (−)-TADDOL (2) [2] (Figure 1), have garnered considerable attention owing to the wide variety of asymmetric reactions promoted by these ligands and/or their derivatives. Although hydrobenzoin (e.g., 3) has not been utilized to the same extent, it has also demonstrated utility as both a chiral ligand [3-8] and auxiliary [9-17]. For example, Hall reported that the hydrobenzoin·SnCl4 complex 5 promotes the allylboration of hydrocinnamaldehyde with modest enantioselectivity (26% ee) [3], and a hydrobenzoin–ytterbium complex was found to catalyze asymmetric aldol/Evans–Tishchenko reactions [5]. Moreover, the hydrobenzoin dimethyl ether 7 was shown to direct the asymmetric addition of organolithium reagents to arene tricarbonylchromium complexes [7] and α,β-unsaturated aldimines [8]. Notably, derivatives of hydrobenzoin in which the aromatic rings have been functionalized in the ortho and ortho' positions often display improved diastereo- or enantioselectivity over the parent diol 3 [3,14]. For example, the addition of cyclooctyl rings to the ortho and ortho' positions of the hydrobenzoin·SnCl4 complex (i.e., Vivol·SnCl4 (6)) leads to a dramatic improvement in enantioselectivity in the allylboration of hydrocinnamaldehyde (93% ee) [3]. Unfortunately, while (R,R)- and (S,S)-hydrobenzoin are relatively inexpensive [18], or can be readily prepared on kilogram-scale from trans-stilbene through Sharpless asymmetric dihydroxylation (SAD) [19,20], the synthesis of ortho,ortho'-functionalized derivatives of hydrobenzoin typically requires several steps that include McMurry coupling of an ortho-substituted benzaldehyde followed by I2-catalyzed isomerization of the resulting stilbene and subsequent SAD [21,22]. Thus, while various hydrobenzoin derivatives have been reported, their multi-step synthesis, the modest enantioselectivity in the SAD step [22], the problems associated with their optical enrichment [6], and the necessary determination of optical purity for each derivative, all complicate the rapid preparation of congeneric libraries. To address these issues, we recently reported a new process for the direct functionalization of (R,R)-hydrobenzoin (3) [23] through a directed ortho,ortho'-dimetalation strategy in which the alcohol functions in hydrobenzoin are deprotonated by n-BuLi and the resulting lithium benzyl alkoxides serve as directed metalation groups (DMGs) [24-28] and facilitate formation of the tetralithio intermediate 8. Herein, we provide a detailed account of this work as well as the application of these methods to a short synthesis of the chiral diol Vivol (4).

As indicated in Scheme 1, the optimized conditions for the directed ortho,ortho'-dimetalation of (R,R)-hydrobenzoin (3) involve the treatment of a solution of 3 under reflux with an excess (6 equiv) of n-BuLi, followed after 16 h by treatment with an electrophile [23]. The optimization of this process relied on a series of D2O quenching studies and analysis of the 1H NMR and mass spectra derived from the crude reaction products. These studies led to the eventual selection of a 2:1 mixture of hexane/ether as the most favorable reaction solvent for the formation of the tetralithio intermediate 8 [23].

Despite the high level of deuterium incorporation (92%) observed in the reaction of the tetralithio intermediate 8 with D2O (Scheme 1), this result was not observed for reactions with other electrophiles (see below). In addition, the products from deuterium quenching studies were often accompanied by the formation of varying amounts of the deoxybenzoin 10, which presumably derives from reaction of an alkoxide function in 8 with D2O, followed by deuteroxide elimination/enolate formation and subsequent reactions with D2O. Bearing this in mind, the directed ortho,ortho'-dimetalation of hydrobenzoin was reinvestigated using I2 as the electrophile quench. As indicated in Table 1, the use of stoichiometric (i.e., 4 equiv, entry 1) amounts of n-BuLi led to low isolated yields of the diiodohydrobenzoin 12. Successively increasing the equivalents of n-BuLi resulted in approximate increases of 15% in the isolated yield of 12, with a maximum yield of roughly 50% achieved when 6 equiv of n-BuLi were employed (entries 2 and 4). Although the use of 8 equiv of n-BuLi led to a slightly higher isolated yield of 12 (53%), and only 8 hours were required for the formation of the tetralithio intermediate (entries 6 and 7), the conditions identified in entry 4 require fewer equivalents of base and electrophile and were consequently selected as the optimal reaction conditions [23]. Notably, addition of TMEDA (entries 3 and 5), which would presumably assist in the disaggregation of organolithium species, failed to improve these results and in fact led to lower conversion and isolated yields of the diiodohydrobenzoin 12.

During the evaluation of the reaction of the tetralithio intermediate 8 with I2 (Table 1), we were surprised to find that monoiodohydrobenzoin 11 was produced in equivalent or lower yield than the diiodohydrobenzoin 12, even at low overall conversion (e.g., Table 1, entries 1 and 2). These results suggested that the rate-limiting step in the formation of the tetralithio intermediate 8 may be the first DoM (i.e., formation of a trilithio intermediate) and that the second DoM event is relatively more rapid. To gain further insight into this process, the reaction of (R,R)-hydrobenzoin (3) with n-BuLi followed by treatment with D2O [23] or CH3I was monitored by mass spectrometry and 1H NMR spectroscopy, respectively. As indicated in Figure 2, the results of the D2O quenching study were in accordance with our original observation: A relatively slow removal of the first ortho proton is followed by a second, more rapid DoM event.

A possible explanation for the differing rates of DoM events observed during the D2O quenching studies is depicted in Scheme 2 [29]. Thus, following the first ortho-metalation, the intermediate aryl lithium 17 (presumably in an aggregated form) may adopt a conformation in which the lithium alkoxide (DMG) and consequently the base (i.e., n-BuLi or its aggregates) are positioned in close proximity to the ortho proton that is to be removed. Alternatively, the intermediate aryl lithium 17 may undergo rearrangement to the six-membered heterocycle 18, in which the cis-relationship between the distal lithium alkoxide and the unlithiated phenyl ring facilitates the second deprotonation. While the latter proposal is less likely, based on Seebach’s observation that 2-phenylethanol does not undergo ortho-lithiation [30], reaction of the tetralithio intermediate 8 with dimethyldichlorosilane led to the formation of the bis(siloxane) 19 (not the 5-membered ring bis(siloxane) isomer), whose structure was unambiguously confirmed by X-ray crystallographic analysis (see Scheme 2, inset).

As highlighted in Scheme 4, attempts to directly engage diiodohydrobenzoin 12 in Cu-catalyzed C–N cross-coupling reactions [33] led only to the formation of cis-4b,9b-dihydrobenzofuro[3,2-b]benzofuran (24) [34]. Consequently, the diol 12 was converted to the corresponding acetonide 25 or methyl ether 26 prior to cross-coupling. In this manner, the diphenylhydrobenzoin derivative 27 could be accessed in excellent overall yield [3,23]. Alternatively, lithium–halogen exchange carried out on diiodohydrobenzoins 25 or 26, followed by reaction with various electrophiles affords access to a wider array of hydrobenzoin derivatives than those highlighted above in Scheme 3 [17]. For example, electrophiles such as TMSCl and dichlorodimethylsilane engage in high yielding reactions with the dianions 28 and 29 to provide the silyl-functionalized hydrobenzoin derivatives 30–33.

The bis(benzoxaborol) 20 also proved to be a versatile intermediate for the synthesis of hydrobenzoin derivatives through Pd-catalyzed cross-coupling reactions (Scheme 5). This approach compliments those described above and avoids the need to protect the diol function prior to the cross-coupling step. Notably, purification of the bis(benzoxaborol) 20 proved unnecessary as the diphenylhydrobenzoin 34 was prepared in an overall yield of 32% from (R,R)-hydrobenzoin (3) without purification of 20, compared to 21% when the intermediate bis(benzoxaborol) 20 was purified by column chromatography [23]. Finally, the efficiency of this process was demonstrated in a short formal synthesis of (R,R)-Vivol (4). Thus, a Pd-catalyzed cross-coupling of the known triflate 35 [35] with the bis(benzoxaborol) 20 afforded the dicyclooctenylhydrobenzoin 36, which was reduced in quantitative yield to afford Vivol (4) by Hall [3]. Notably, this three-step procedure for the preparation of optically pure Vivol compares well with the reported synthesis and should be effective for the rapid production of new ligands for asymmetric synthesis.

In conclusion, an efficient and economical process was developed for the direct functionalization of hydrobenzoin that relies on a directed ortho,ortho'-dimetalation strategy. Importantly, a wide variety of chiral diols (e.g., Vivol (4)) are now readily accessible in optically pure form following this one-pot reaction. Although the range of electrophiles that engage in synthetically useful reactions with the tetralithio intermediate 8 is limited, the diiodohydrobenzoin 12 and bis(benzoxaborol) 20 are both prepared in good yield and are readily derivatized through cross-coupling reactions. We are currently exploring the utility of the bis(benzoxaborol) 20 and derivatives of this substance as chiral Lewis acids and will report our findings in due course.

We thank NSERC and Merck Frosst Canada for support. I.C. was supported by a Michael Smith Foundation for Health Research Trainee Award and by a SFU Graduate Fellowship. We thank Hongwen Chen (SFU) for assistance with mass spectrometry.

© 2011 Cho et al; licensee Beilstein-Institut.
This is an Open Access article under the terms of the Creative Commons Attribution License (http://creativecommons.org/licenses/by/2.0), which permits unrestricted use, distribution, and reproduction in any medium, provided the original work is properly cited.
The license is subject to the Beilstein Journal of Organic Chemistry terms and conditions: (http://www.beilstein-journals.org/bjoc) 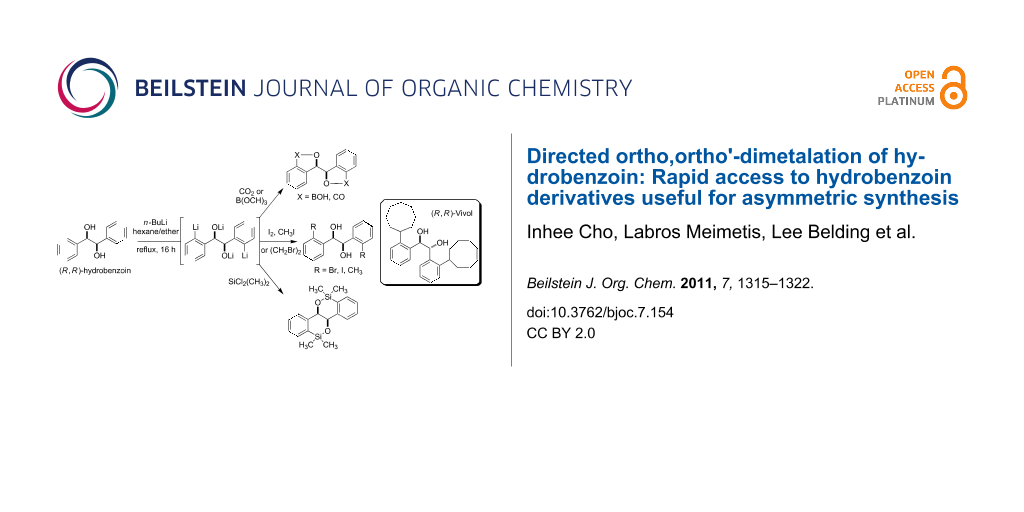