All articles from this author
Alois Plodek


All articles from this author
Franz Bracher

Readily available 4-bromobenzo[c][2,7]naphthyridine undergoes regioselective direct ring metalation at C-5 with TMPMgCl∙LiCl at −40 °C. Quenching with various electrophiles gives a broad range of 5-substituted products, which are building blocks for the synthesis of heterocyclic natural products and analogues thereof. In combination with a Parham-type cyclization a novel approach to pyrido[4,3,2-mn]acridones has been worked out.

Polycyclic aromatic alkaloids are a unique class of natural products with a broad pattern of biological activities. One of the most prominent classes are the so-called pyridoacridine alkaloids to be found in diverse marine sources (tunicates, sponges). Their chemistry, pharmacology and biosynthesis have been the subject of a couple of review articles [1-4]. Another source of polycyclic aromatic alkaloids are tropical plants, e.g., the Annonaceae family [5].

A very common structural feature of the abovementioned alkaloids is the benzo[c][2,7]naphthyridine ring system, as exemplified by the marine alkaloids amphimedine (1), ascididemin (2), kuanoniamine A (3), styelsamine D (4), and eilatin (5). Skyler and Heathcock described, based on the occurrence and proposed biosyntheses of known alkaloids, a “pyridoacridine family tree” which is claimed to be useful for designing total synthesis, but also for predicting yet undiscovered alkaloids from this chemotype [6]. Only two tricyclic benzo[c][2,7]naphthyridine alkaloids, perlolidine (6; from rye grass, Lolium perenne) [7] and subarine (7; from an unidentified marine tunicate) [8], have been identified yet (Figure 1).

The successful directed remote metalation of 4-arylbenzo[c][2,7]naphthyridines 10 prompted us to investigate direct ring metalation of the readily available 4-bromo intermediate 9d [14]. Trapping of the envisaged 5-metalated intermediate with various electrophiles, followed by transformations of the 4-bromo residue (cross-coupling reactions, nucleophilic substitutions) should open the opportunity to generate a broad variety of 4,5-disubstituted benzo[c][2,7]naphthyridines as building blocks for natural products total synthesis (Figure 2D).

For the envisaged direct ring metalation of 4-bromobenzo[c][2,7]naphthyridine (9d) the choice of an appropriate base was essential. Alkyllithium bases were not suitable, since two undesired reactions were anticipated: As mentioned above, 4-substituted benzo[c][2,7]naphthyridines tend to add organolithium compounds to the C-5–nitrogen double bond [13] (see Figure 2B), further undesired bromo–lithium exchange is possible at C-4. Since halogen substituents at C-4 are further readily substituted by nucleophiles, we considered bulky, non-nucleophilic amide bases as most promising for the metalation at C-5.

Inspired by reports of Knochel’s [19,20] and our group [21-23] on direct metalation of substituted isoquinolines at C-1 and in continuation of our recent work on the synthesis of aromatic oxoaporphine, oxoisoaporphine and pyridoacridine alkaloids [17,18,21,22] using direct ring metalations of heterocycles with the hindered amide base TMPMgCl∙LiCl as crucial step, the Knochel–Hauser base was again the metalation reagent of our choice.

Metalation of 4-bromobenzo[c][2,7]naphthyridine (9d) using 1.1 equivalents TMPMgCl∙LiCl at −40 °C, followed by the reaction with various electrophiles gave, in most cases, the expected 5-subsituted products (Scheme 1). Quenching of metalated 9d with aldehydes 11a–d while warming to room temperature led to the formation of the expected racemic secondary alcohols 12a–d in moderate to good yields (50–66%, Scheme 1). Any attempts to improve the yields failed. The use of 2.2 equivalents of base, longer reaction times, higher or lower temperatures did not increase the yields.

In order to explore additional metalations at other positions than C-5 or imaginable halogen dance reactions [24] during the metalation process, we performed a D2O quenching experiment after the metalation period. In recovered starting material 9d-D deuterium incorporation (about 60% calculated from the NMR resonance of 5-H) was detected exclusively at C-5, clearly indicating the regioselectivity of this metalation (Scheme 2). Probably, the metalation rate is even higher than 60% (compare the 71% yield for the iodine quenching product 13), as D2O quenching of metalated arenes obtained with amide bases do not necessarily give complete deuteration. A hydrogen-bonded complex between the metalated species and TMP is postulated to undergo partial H/D exchange reactions with D2O before quenching takes place [25].

The reaction of metalated 9d with diverse electrophiles was tested in further studies. Quenching with iodine gave 5-iodo derivative 13 in a good yield of 71%. As the group of Knochel could demonstrate [26] that the closely related substrate 1-chloro-4-iodo-2,7-naphthyridine undergoes consecutive cross-coupling reactions, 4-bromo-5 iodobenzo[c][2,7]naphthyridine (13) is regarded as an interesting building block for synthetic chemists. Another interesting building block is ester 14, which was obtained in 37% yield by quenching 5-metalated 9d with diethyl carbonate. The quenching of 9d after magnesiation with N,N-dimethylformamide did not lead to the expected bromoaldehyde 15 but provided surprisingly the aminoaldehyde 16. Probably, the intermediate aminoalkoxide delivers dimethylamine during aqueous work-up, followed by SNAr reaction at C-4. Related nucleophilic substitutions have been reported for 4-chlorobenzo[c][2,7]naphthyridine (9a) previously [10]. Alternatively, this SNAr could have taken place under anhydrous conditions directly from the aminoalkoxide. This latter mechanism is in analogy to an intramolecular reaction of a hydrazone derivative proposed by Guillier et al. [12]. Reaction of allyl iodide (17) with metalated 9d after addition of catalytic amounts of CuCN∙2LiCl led to the formation of the 5-allyl compound 18 in 37% yield. Metalation of 9d using TMPMgCl∙LiCl and subsequent transmetalation with ZnCl2 followed by Negishi cross-coupling reaction in the presence of Pd(dba)2 and P(2-furyl)3 with aryl iodides 19a and 19b led to the expected biaryls 20a and 20b in moderate yields (Scheme 3). All these reactions proceeded without byproducts being observed. In all cases unreacted substrate 9d was recovered in correspondent quantity.

With the 5-(hetero)aryl-substituted 4-bromobenzo[c][2,7]naphthyridines 12a–d in hand we aimed at the synthesis of the respective pyrido[2,3,4-kl]acridines by intramolecular ring-closing steps. Similar C–C couplings were performed previously by application of palladium-catalysed cross-coupling reactions, photochemical cyclizations or even in manner of a radical reaction [27-29]. Starting with alcohol 12b, a putative precursor of the alkaloid kuanoniamine A (3), the three described cyclization methodologies were tested starting directly from alcohol 12b as well as from ketone 21, obtained by oxidation of 12b. The intramolecular biaryl synthesis via an Heck-type palladium-catalysed reaction according to the method of Harayama [30] (Pd(II)acetate/tri(o-tolyl)phosphine/K2CO3) did not lead to the expected alkaloid 3. Also the radical procedure published by Markgraf et al. [31] using AIBN and Bu3SnH and a photochemical cyclization protocol we had utilised for the construction of oxoaporphine alkaloids before [21] failed to give kuanoniamine A (3, Scheme 4). In order to explore alternative cyclization protocols, we performed model reactions with 2-bromophenyl analogue 12c. Neither the reaction with diverse Pd catalysts, nor Oliveira’s Pd-catalysed intramolecular tandem stannylation/biaryl coupling protocol gave the attempted pentacyclic products [32].

However, having the biaryls 20a and 20b prepared we intended to develop a new approach to pyrido[4,3,2-mn]acridines by an alternative intramolecular cyclization step. To reach that aim, the bromo substituent of the appropriate substrates 20a or 20b should converted into the respective organomagnesium product by bromine–magnesium exchange. In an expected subsequent Parham-type ring-closing reaction [33] the nucleophilic carbon at position 4 should trap the ester (or nitrile) group to lead to a pentacyclic ketone. A similar cyclization reaction was developed by our group some years ago for ester substrates [18], and an analogous cyclization of nitriles was described by Kristensen in ring-closing cascade reactions [34]. The new cyclization method was first tested with ester 20a. Reaction of 20a with 2.2 equiv iPrMgCl∙LiCl, which is a very mild reagent for bromine–magnesium exchange reactions in the presence of labile functional groups like esters [35], at 0 °C led, after aqueous work-up, to the formation of the expected pyridoacridone 22 in 28% yield (Scheme 5). Although starting material could not be recovered, another product 23, which is most likely the debrominated, not cyclized analogue of 20a, was observed in traces. The outcome of this experiment shows that the bromine–magnesium exchange reaction was most likely completed, but the intramolecular trapping of the ester group is the limiting factor here. Nevertheless, we could demonstrate that starting from 4-bromobenzo[c][2,7]naphthyridine (9d) a fast and easily affordable new approach to amphimedine-type pyridoacridones and analogues is possible in just two steps.

In conclusion, we could demonstrate that readily available 4-bromobenzo[c][2,7]naphthyridine (9d) undergoes regioselective direct ring metalation at C-5 with TMPMgCl∙LiCl at −40 °C. Quenching with various electrophiles gives a broad range of 5-substituted products, which should be valuable building blocks for the synthesis of heterocyclic natural products and analogues thereof. In combination with a Parham-type cyclization a novel approach to pyrido[4,3,2-mn]acridones could be shown.

The results presented here are part of the Ph.D. theses of Benedikt C. Melzer and Alois Plodek. The authors wish to thank Dr. Marco Keller for significant support in finalizing the manuscript.

© 2019 Melzer et al.; licensee Beilstein-Institut.
This is an Open Access article under the terms of the Creative Commons Attribution License (http://creativecommons.org/licenses/by/4.0). Please note that the reuse, redistribution and reproduction in particular requires that the authors and source are credited.
The license is subject to the Beilstein Journal of Organic Chemistry terms and conditions: (https://www.beilstein-journals.org/bjoc) 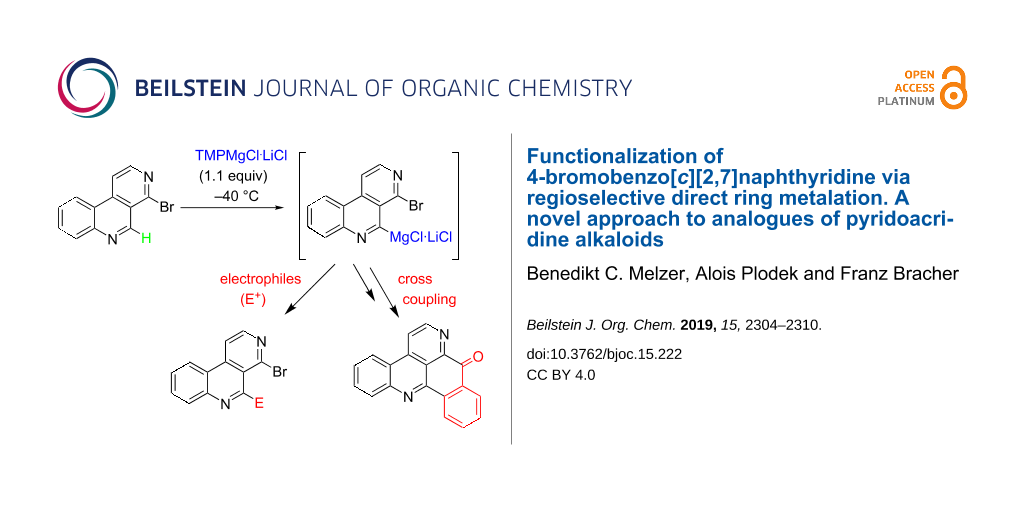