All articles from this author
Qing Wang


All articles from this author
Yao Li


All articles from this author
Ning Wang


All articles from this author
Rui Zhang

In this paper, an angle-sensitive nanoscale grating photonic crystal fabricated through reverse nanoimprint lithography is investigated. The photonic crystal exhibited a wide range color spectrum from red to blue. Periodicity and angle-dependence of the reflection wavelengths are explored through measuring reflectance spectra. Based on the experimental results, a function for reflection wavelength and observation angle is proposed. These results are useful for a possible application as visual sensor.

Figure 1 shows scanning electron microscopy (SEM) images of the photonic crystal with nanoscale grating pattern. The top-view SEM image of the fabricated photonic crystal film in Figure 1a clearly shows the grating structure with a period of 750 nm. The cross-sectional view is shown in Figure 1b. It can be seen that the mould is completely filled and the grating pattern has a height of 170 nm. The results show that the mould patterns were perfectly transferred to the film surface through reverse NIL.

It can be clearly seen that the reflection wavelength peak is negatively correlated with these two factors. The scatter points in Figure 6 are the measured experimental data, and the red lines are the single-variable functions of Equation 2 and Equation 3. This relationship is confirmed by previous research results [24]. As shown in Figure 6, the photonic crystal produces rich color changes when a single observation angle is varied.

A polycarbonate (PC) master mould with period of 750 nm and height of 170 nm was fabricated through NIL. The polydimethylsiloxane (PDMS) and cross-linker were obtained from Sylgard 184 (Dow Corning, USA).

The surface structures of photonic crystal were obtained by SEM (Nova Nano SEM450, USA). The spectroscopic analyses were performed with an Ocean Optics fiber-optic spectrophotometer. The data analysis and fitting were performed by using Origin software.

Evaluation of replicas manufactured in a 3D-printed nanoimprint unit

© 2019 Zheng et al.; licensee Beilstein-Institut.
This is an Open Access article under the terms of the Creative Commons Attribution License (http://creativecommons.org/licenses/by/4.0). Please note that the reuse, redistribution and reproduction in particular requires that the authors and source are credited.
The license is subject to the Beilstein Journal of Nanotechnology terms and conditions: (https://www.beilstein-journals.org/bjnano) 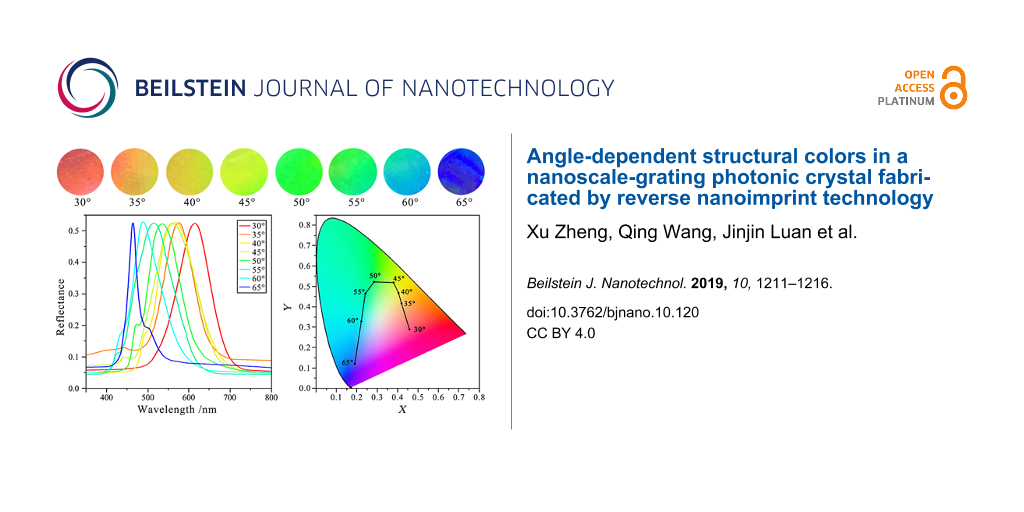