All articles from this author
Lihua Liu


All articles from this author
Yingzan Chen


All articles from this author
Chengjian Song


All articles from this author
Mingjie Ding


All articles from this author
Haipeng Zhao

This article is part of the thematic issue "Low-dimensional materials and systems".

MnO2–CuO–Fe2O3/CNTs catalysts, as a low-dimensional material, were fabricated by a mild redox strategy and used in denitration reactions. A formation mechanism of the catalysts was proposed. NO conversions of 4% MnO2–CuO–Fe2O3/CNTs catalyst of 43.1–87.9% at 80–180 °C were achieved, which was ascribed to the generation of amorphous MnO2, CuO and Fe2O3, and a high surface-oxygen (Os) content.

Nitrogen oxides, NOx (x = 1, 2), contribute to acid rain, photochemical smog, greenhouse effect and ozone depletion [1-3]. The selective catalytic reduction of NO with NH3 (SCR), as a commercialized NOx abatement technology, has received a great deal of attention [4,5]. However, the catalyst of the SCR reaction, V2O5+WO3(MoO3)/TiO2, has some drawbacks, such as the toxic V-based material and the high operating temperature window (300–400 °C) [6-8]. Additionally, this kind of catalyst is easily influenced by ash and SO2, which makes it necessary to be installed downstream of electrostatic precipitator and desulfurizer, where the flue gas temperature is normally below 200 °C [9]. Therefore, it is of importance to develop a SCR catalyst with high catalytic activity below 200 °C.

Carbon nanotubes (CNTs), a low-dimensional material, exhibit a one-dimensional tubular structure and outstanding chemical and physical properties. Hence, they are extensively studied for the application in SCR, e.g., in MnOx/CNTs [10], Mn–CeOx/CNTs [11] and CuOx/carbonaceous-materials catalysts [12]. However, the working temperature window of these SCR catalysts is still between 200 and 300 °C.

A series of Cu-based [12,13] and (Mn + Fe)-based [14,15] catalysts have been applied in the SCR reaction and presented good catalytic activity. Nevertheless, the preparation procedures of the catalysts always need high-temperature calcination or high-pressure hydrothermal reactions, which are uneconomic and unsafe. Our previous studies, including MnO2–Fe2O3–CeO2–Ce2O3/CNTs [16] and Ce2O3–CeO2–CuO–MnO2/CNTs [17] catalysts, have reported a simple and mild redox method for the preparation of ternary and quaternary catalysts, and the resultant catalysts show outstanding denitration activity at 80–180 °C. The mechanisms of above preparation method are redox reactions between MnO4− (from KMnO4) and Cl− (from FeCl3 and CeCl3), or Mn7+ and O2− (from KMnO4) as well as MnO4− (from the KMnO4) and Cl− (from CeCl3). The generation of Cl− anions in the preparation process can result in corrosion of the equipment. On the basis of the above issues, a redox method with the formation of HNO3 between Mn7+ and O2− (only from KMnO4) was developed, and the passivation through HNO3 can protect the metal equipment. This redox method yielded MnO2–CuO–Fe2O3/CNTs catalysts, and the as-synthesized catalysts were applied in the SCR reaction at 80–180 °C.

Figure 2 shows the XRD patterns of the acid-treated CNTs and the as-synthesized catalysts. All samples present the characteristic diffraction peaks at 26.3°, 42.6° and 53.7°, corresponding to the (002), (100), and (004) planes of graphite, respectively [18]. For MnO2–CuO–Fe2O3/CNTs, only a weak peak of MnO2 (PDF#53-0633) can be observed when the loading was greater than or equal to 4%, whereas no diffraction peaks of metal oxides could be found, suggesting the formation of amorphous metal oxide phases. Amorphous catalytic materials are conducive to SCR activity [19], which is also shown in the results of NO conversion (Figure 1) and our previous studies [6,16,17]. In the case of Mn–Cu–FeOx/CNTs-IWIM, a series of peaks corresponding to Mn3O4 (PDF#18-0803) can be seen. Metal oxide catalysts with higher crystallinity show a smaller catalytic activity [20]. This is corroborated by the results of NO conversion. Besides, the intensities of the graphite peaks declines with increased loading, which is due to the interaction between the metal oxide catalysts and CNTs [21-25].

The morphologies of the acid-treated CNTs and the catalysts were investigated by TEM and HRTEM (Figure 3). The acid-treated CNTs have a smooth external surface (Figure 3a) that becomes coarse after being loaded with active metal oxide (Figure 3b). Additionally, the HRTEM images show the presence of catalysts nanoflakes, also verifying the generation of metal oxide catalysts on the CNT surface. The EDX spectrum (Figure 3d) shows signals of Mn, Cu, Fe, O and C. Clear lattice fringes of the metal oxides cannot be observed in the HRTEM images, indicating the generation of amorphous materials, which is consistent with the results of XRD (Figure 2).

The O 1s peak can be divided into three peaks (Figure 4F). The peak at 529.9 eV is attributed to lattice oxygen (designated as OL), while the binding energies at 530.5–534.0 eV are ascribed to surface oxygen (labeled as OS). The OS content (Table S2, Supporting Information File 1) of the 4% MnO2–CuO–Fe2O3/CNTs catalyst is 66.7%, whereas it is 36.8% in Mn–Cu–FeOx/CNTs-IWIM catalyst. OS has a higher mobility than OL, which is in favor of the oxidation of NO to NO2, accelerating the SCR reaction [37]. This was also confirmed by the results of NO conversion and of previous studies [6,16,17].

STEM and element mapping were adopted to further investigate the morphology of the catalyst. As shown in Figure 5a, bright dots associated to the metal elements can be found, indicating the formation of metal oxide catalysts on CNTs. The STEM-EDX mappings (Figure 5b–g) exhibit a series of columnar element-distribution images, further proving that the metal oxide catalysts have been successfully loaded on the CNTs.

In SCR reaction, the redox performance of the catalyst plays a significant role in the catalytic cycle. Therefore, the reducibility of the as-obtained catalysts was evaluated by using hydrogen temperature-programmed reduction (H2-TPR). The results are listed in Figure 6. The catalysts exhibits three reduction peaks. For 4% MnO2–CuO–Fe2O3/CNTs catalyst (Figure 6a), the peaks at 150–300 °C (centered at 249 °C) are overlapping reduction peaks of MnO → Mn2O3 [26] and CuO → Cu2O [12,38,39]. The reduction peaks between 300–380 °C are overlapping peaks of Mn2O3 → Mn3O4 → MnO [26] and Cu2O → Cu [12]. Moreover, a reduction peak could be found at 580 °C, which is attributed to the oxygen groups on the CNT surface. For the Mn–Cu–FeOx/CNTs-IWIM catalyst (Figure 6b), the centers of the first and second reduction peaks (257 and 454 °C) were all at higher temperatures than those of 4% MnO2–CuO–Fe2O3/CNTs catalyst. This means that the reducibility is lower compared with that of 4% MnO2–CuO–Fe2O3/CNTs.

Cyclic and long-term stability of catalysts

Comparison of the catalytic performance of three catalysts

Table 1 shows three catalysts with excellent performance in the low-temperature NO reduction with NH3, but the chemical reactions during preparation are different. The 6% Ce2O3–CeO2–CuO–MnO2/CNTs and 4% MnO2–Fe2O3–CeO2–Ce2O3/CNT catalysts present outstanding denitration efficiency values over the test temperature range, but Cl− anions are formed in the preparation process, which might lead to a corrosion of metal equipment. The 4% MnO2–CuO–Fe2O3/CNTs catalyst reaches NO conversions of 43.1–87.9% at 80–180 °C, which is similar to two catalysts in our previous papers. Moreover, HNO3 is formed in the preparation process, which leads to an inactivation of the metal equipment.

The generation mechanism for the MnO2–CuO–Fe2O3/CNTs catalyst

A reaction mechanism of the synthesis of the MnO2–CuO–Fe2O3/CNTs catalystis proposed. Based on the results of XRD and XPS, active components of MnO2, CuO, and Fe2O3 are formed. The following formation mechanism was inferred: Cu2+ and Fe3+ ions are first adsorbed on the surface of acid-treated CNTs via electrostatic interaction. Then the Cu(NO3)2 and Fe(NO3)3 are partly hydrolyzed in situ into Cu(OH)2, Fe(OH)3, and HNO3 on the CNTs. Afterwards, MnO2 is formed through the reaction between KMnO4 and HNO3, and the hydrolysis process is accelerated. MnO2–Cu(OH)2–Fe(OH)3/CNTs samples are obtained, and the MnO2–CuO2–Fe2O3/CNTs catalysts are prepared through thermal dehydration of the MnO2–Cu(OH)2–Fe(OH)3/CNTs samples [42,43]. The detailed reaction equations are:

The raw CNTs (multi-wall) of 60–100 nm in diameter were purchased from Shenzhen Nanoport Company (China). KMnO4 (AR), Cu(NO3)2·3H2O (AR), Fe(NO3)·9H2O (AR) and ethanol (AR) were purchased from Shanghai Chemical Reagent Ltd. All chemical were used without further purification. Deionized water with a resistivity above 18.0 MΩ·cm was obtained from a JL-RO100 Millipore-Q Plus.

X-ray diffraction (XRD) was measured with an X'Pert Pro MPD X-ray diffractometer using Cu Kα radiation (λ = 0.15406 nm) with a 2θ range from 5° to 80°. Transmission electron microscopy (TEM) was performed on a JEOL model JEM 2010 EX instrument. Temperature-programmed reduction by H2 (H2-TPR) was assessed by using a custom-built TCD apparatus. Before the H2-TPR test, 50 mg catalyst was firstly purged in N2 at 200 °C for 1.5 h. The test was carried out in N2 (containing 6% H2) with a heating rate of 10 °C/min. X-ray photoelectron spectroscopy (XPS) was carried on a Thermo Scientific ESCALAB 250 spectrometer equipped with a dual Al/Mg anode (0.6 eV resolution).

The SCR activity tests were carried out in a fixed-bed quartz reactor using 0.15 g catalyst in each test. The reaction gas consisted of [O2] = 5%, [NO] = [NH3] = 400 ppm, balanced by N2 gas. The total flow rate was 700 mL/min equivalent to a weight hourly space velocity (WHSV) of 280 L·gcat−1·h–1. A flue-gas analyzer (Kane International Limited, KM950) equipped with the NO, NO2, SO2, and O2 sensors was used to monitor the gas concentration. All data were recorded after 30 min till the catalytic reaction reached a steady state.

This work was funded by Scientific and Technological Program-Funded Project of Fuzhou City (Grant No. 2015H0016), as well as Engineering Laboratory of Henan Province for Efficient Utilization of Coal Salt Resources.

© 2019 Zhang et al.; licensee Beilstein-Institut.
This is an Open Access article under the terms of the Creative Commons Attribution License (http://creativecommons.org/licenses/by/4.0). Please note that the reuse, redistribution and reproduction in particular requires that the authors and source are credited.
The license is subject to the Beilstein Journal of Nanotechnology terms and conditions: (https://www.beilstein-journals.org/bjnano) 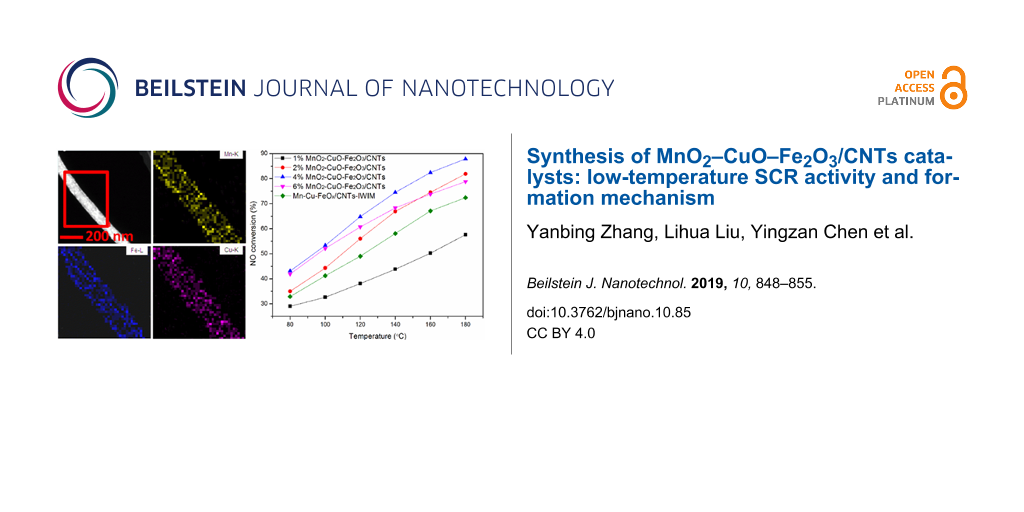