2D materials have gained tremendous research interest due to the unique properties that result from their atomic-scale thickness [1-5]. These materials, which include graphene, hexagonal boron nitride, and the large family of transition metal dichalcogenides, have electronic structures exhibiting metallic, semiconducting, and insulating properties. Novel electronic devices have been realized by heterostructures based on vertical stacking or lateral stitching of 2D materials with different electronic properties [6]. Lateral graphene/hexagonal boron nitride (Gr/hBN) heterostructures, due to very low lattice mismatch between graphene and hBN, are most suitable as platforms for fully two-dimensional nanoelectronic devices [7-11].

In a RTD, a material with low bandgap energy is sandwiched between two materials with larger bandgaps, i.e., a quantum well between two potential barriers, forming a so-called double-barrier quantum well structure. In the well, the energy of the electrons is quantized due to the quantum confinement of their wave function. Incident electrons with energies equal to the quantized levels of the well pass through the barriers with rather high transmission probabilities. Electrons with other energies have an extremely small chance of passing through. This causes RTDs to exhibit NDR in their current–voltage characteristic.

Conventionally, RTDs are made by vertical stacking of bulk semiconductor materials with different bandgap energies to form a planar 3D structure in which the direction of carrier transport is perpendicular to the interface of stacked materials [21-23]. In recent years, a few RTD structures based on 2D materials have been proposed [24-26]. In such RTDs the bandgap difference needed for normal operation is created by juxtaposing graphene nanoribbons (GNRs) with different widths (utilizing the inverse relation between GNR width and bandgap energy) or by periodically arranging graphene (the well) and boron nitride regions (the barriers). While the performance of conventional RTDs based on bulk semiconductors is degraded by dislocations and lattice mismatch at the interface of different bandgap materials, the RTDs based on heterojunctions between armchair graphene nanoribbons (AGNRs) and armchair boron nitride nanoribbons (ABNNRs) have shown superior performance because of the very low lattice mismatch between graphene and hBN [3]. However, inevitable interfacial defects located at the interface of Gr/hBN heterojunctions, including point defects (single vacancies and substitutional defects) and topological defects can alter the electronic properties of Gr/hBN heterostructures and, consequently, the performance of RTDs based on Gr/hBN heterojunctions [26-33]. Formation energy calculations have revealed that point defects occur preferentially at the interfaces of graphene and hBN domains rather than in the middle of these domains, and that substitutional defects are dominant [30]. Therefore, a reliable and accurate investigation of the electronic behavior in devices based on Gr/hBN heterostructures must consider the effect of such defects.

The effect of substitutional defects on the electronic transport properties of zigzag graphene nanoribbons symmetrically decorated with BN is described in [34]. However, it considers the interfaces of the Gr/hBN regions are parallel to the transport direction so that there are no bandgap variations in the transport direction. Since the electron transport is in zigzag direction, spin-polarized transport calculations are utilized. Instead, in the study presented here, the electron transport is in armchair direction, which is not spin-polarized. Therefore, nonequilibrium Green’s functions with tight-binding Hamiltonians (without considering spin degree of freedom) are utilized for electronic transport calculations. Furthermore, in the proposed RTD there are four GNR/BNNR heterojunctions perpendicular to the transport direction (Figure 1), which are required to construct the double-barrier quantum well structure.

Figure 1a schematically shows the structure of the proposed RTD. An AGNR of 19 carbon atoms in width (19-AGNR) and four hexagonal carbon rings in length (1.7 × 1.6 nm2) is sandwiched between two ABNNRs of the same width but of only one hexagonal hBN ring in length (1.7 × 0.42 nm2). Two spacer regions are considered at both sides of the structure to exclude outward interfacial defects from the contact regions. The whole structure is assumed to be connected to semi-infinite AGNR contacts at both sides. The energy band edge diagram of the proposed RTD along with the quantized energy level of the well are shown in Figure 1b. Due to small lattice mismatch between graphene and hBN the edge bond relaxation correction for carbon atoms at the interface of C and hBN domains could be ignored [35]. Therefore, the electronic structure of the proposed RTD could be modeled via a tight-binding Hamiltonian, HD, including first nearest-neighbor interactions [36]. The hopping energies between C, B and N atoms and the on-site energies of B and N atoms are listed in Table 1 [37].

aε and t denote the on-site and hopping energies, respectively (both in eV).

where η is an infinitesimal positive number and the non-Hermitian self-energy matrix, Σ(E) = Σ1(E) + Σ2(E), represents the escape rate of electrons from the device into the semi-infinite contacts. The self-energy matrices are calculated through a highly convergent recursive method [39]. Then the transmission as a function of the energy is obtained via [39]:

in which Ga(E) = (Gr(E))† is the advanced Green's function and Γj (j = 1, 2), represent the level broadening due to the coupling between device and contacts:

Finally, the current through the device is calculated via [38]:

in which q is the electron charge, f(E) is the Fermi–Dirac distribution function at the contacts and V is the bias voltage. The Fermi level at both contacts is assumed to be 0.03 eV above the conduction band edge [40]. Room temperature (300 K) is considered in all simulations.

Substitutional carbon atoms in boron or nitrogen sublattices (CB and CN) as well as boron or nitrogen atoms on carbon sites (BC and NC) are considered (Figure 2). Each defect could occur inside the well or in the contact regions. Since the typical defect concentration for real samples is one defect per ca. 10 Å, one defect of each type is considered at the Gr/hBN heterojunctions [41].

Figure 4a depicts the effect of CB and NC substitutional defects at the interface between the left ABNNR barrier and the well on the current–voltage characteristic of the proposed RTD. Both defects lower the on-site energy at the place of the substituted atom due to the n-type character, which shifts all energy levels including the conduction band edge toward lower energies. The NC defect inside the well also lowers the resonant energies of the well. Therefore, the transmission peaks move downward (Figure 4b), which causes the peak current (Ip) to increase and the peak voltage (Vp) to decrease (Figure 4a). A CB defect in the left barrier lowers the conduction band edge (Figure 3e). This also, by reducing the height of the left energy barrier, lowers the resonant energies of the well, which in turn moves the transmission peaks downward (Figure 4b). Lower transmission peaks translate to decreased Vp and increased Ip (Figure 4a).

CB and NC defects may occur at the interface between the right barrier and the right spacer (see Figure 2). Because these substitutional defects are outside the well region they have no effect on the resonant energies of the well (Figure 6b). Therefore, in both cases Vp remains unchanged as illustrated in Figure 6a. Nevertheless, a CB defect in the right barrier lowers the conduction band edge and consequently the barrier height. Therefore, the transmission probabilities over the right barrier at all energies are increased compared to a defect-free RTD (red curve in Figure 6b). The NC defect in the right spacer also lowers the conduction band edge. This creates a local quantum well in the right spacer region, which, by localizing electron wave functions, reduces the transmission coefficients (yellow curve in Figure 6b). This causes Ip to decrease compared to a defect-free structure.

Figure 7 compares the current–voltage characteristic of RTDs including BC and CN defects at the interface between the left barrier and the left spacer with that of a defect-free RTD. If there is no defect in the left spacer, by increasing the bias voltage a quantum well is formed in this region, which localizes incident electron waves. However, a BC defect in the left spacer region shifts the conduction band edge upward. Thus, a potential barrier with a very small height (with respect to the ABNNR potential barrier) is formed. Although by increasing the bias voltage the height of this potential barrier is lowered, a quantum well is never formed in the spacer region in this case (at least up to a bias voltage of 250 mV, which is considered in this work). The absence of a local quantum well in the left spacer region (for bias voltages ranging from 0 to 250 mV) causes the transmission peak to vanish at larger bias voltages with respect to the defect-free structure. Therefore, the peak values of current and voltage are increased with respect to defect-free structure (Figure 7a). A CN defect in the left barrier region, besides reducing the bandgap, slightly lowers the conduction band edge (Figure 3f). This has a twofold effect: a small downward shift of the resonant energies of the well and a slight increase in transmission probabilities over the left barrier (Figure 7b), which in turn cause Ip to slightly increase and Vp to slightly decrease, as illustrated by the yellow curve in Figure 7a. Thus, a single substitutional defect can severely alter the NDR behavior of RTDs based on AGNR/ABNNR heterojunctions. This implies that by intentionally introducing such defects in devices based on AGNR/ABNNR heterojunctions, nanoelectronic devices with desired performance characteristics can be designed.

A new photodetector structure based on graphene nanomeshes: an ab initio study

Beilstein Talk by Armin Gölzhäuser on October 7 – register for this free online talk!

© 2020 Sanaeepur; licensee Beilstein-Institut.
This is an Open Access article under the terms of the Creative Commons Attribution License (http://creativecommons.org/licenses/by/4.0). Please note that the reuse, redistribution and reproduction in particular requires that the authors and source are credited.
The license is subject to the Beilstein Journal of Nanotechnology terms and conditions: (https://www.beilstein-journals.org/bjnano) 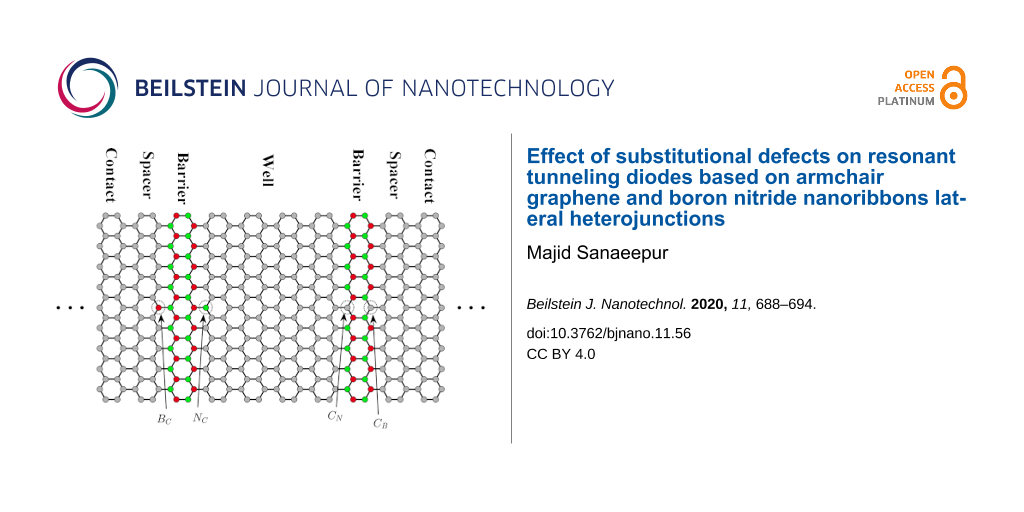