All articles from this author
Yang Liu


All articles from this author
Wenjun Zhou

This article is part of the thematic issue "Nanomaterials and nanodevices for green energy harvesting and storage".

Energy plays a vital role in human society. It is an important material basis for human activities and promotes scientific and technological development and economic growth. The current rapid economic development almost completely relies on non-renewable resources such as oil, coal, and natural gas. The consumption of fossil fuels, at the same time, causes many environmental problems. In this regard, looking for green renewable energies to replace fossil energies has become a future development trend. Especially the high degree of disorder that widely exists in nature and is not fully utilized has raised great interest of researchers [1,2].

Triboelectric nanogenerators (TENGs) are environmentally friendly energy collectors that improve energy utilization. They can use forms of renewable energy that are widely available in the environment and can replace non-renewable resources such as coal and oil [3]. In order to convert mechanical energy into electrical energy, various methods were developed, such as electromagnetic generators [4-6], piezoelectric materials [7-10], and pyroelectric materials [11,12]. The underlying principles of TENGs converting mechanical energy into electrical energy are the friction electrification effect and the electrostatic induction principle. When two materials with different electronegativity are physically contacted, positive and negative electrostatic charges are generated on each material surface. When the materials are separated, the positive and negative electrostatic charges on the materials will also be separated, resulting in a potential difference. The charge transfer strongly depends on the work functions of the two materials in contact, for example, metal–metal, semiconductor–semiconductor and semiconductor–metal contact pairs [14,15]. A semiconductor–metal contact can be described by the band diagram shown in Figure 1. The frictional electrical properties of materials depend on their work functions and Fermi levels [16,17]. The intermediate state in the bandgap can reduce the barrier of electron transfer, thus, enabling electron flow from insulator to metal (vice versa) or from an insulator to another insulator.

TENGs are miniaturized and portable. They generate current by collecting tiny amounts of energy and supply power for microelectronic devices and sensors. Wind energy [18-21], water wave energy [22,23], acoustic energy [24,25], and energy generated by human activities [26,27] can be collected and effectively converted into electrical energy for medical, meteorological, and other applications. A new type of TENG with environmental protection, high reliability and low cost is being actively developed [28-32]. However, because of the small size of TENGs, the output performance is greatly limited. Improving the output performance is a factor that must be considered when designing and manufacturing TENGs.

The selection of materials plays an important role regarding the output power of TENGs. The selection of appropriate materials can significantly improve the amount of transferred charge. Basic physics explains the difference in the amount of transferred charge between different materials. In addition, after TENGs were invented in 2012 [33,34], many attempts have been made to enhance the energy harvesting efficiency. There are four ways to enhance the efficiency of energy collection. These are (1) surface treatment of the contact materials, including increasing the surface roughness and physical surface modification to enhance the surface charge density [35-37], (2) reduction of the impact of the external environment on TENGs [38,39], (3) enhancement of the surface charge density, including active charge pumping and intercalation of a charge trap layer [40,41], and (4) increase of the number of TENG units [42,43].

In order to improve the surface charge density in the contact electrification process, it is necessary to expand the effective contact surface area by surface engineering of micro-/nanoscale structures [44-46]. There are various processes for the surface engineering of polymers with micro-/nanoscale structures, such as template forming, plasma treatment, and chemical approaches. Previous studies mostly focused on the preparation process of the nanoscale morphology on the polymer surface [47-49]. The electrons on the polymer surface cannot be transferred to the conduction band and the charge cannot flow freely. Therefore, there is no high charge density on the tip surface of the polymer surface.

Here, size and morphology of nanoscale copper were controlled by adjusting current density, temperature, pH value, and solution concentration during electrodeposition. The effects of different morphologies and sizes on the energy harvesting efficiency of the TENG were studied. The enhancement effect of different surface charge density distributions on the output performance of the nanostructured metal TENGs is explained.

In this study, 1 M sulfuric acid, copper sulfate pentahydrate (purchased from Yongrong) with purity greater than 99.5%, and deionized water were used to prepare the electrolyte solution. The experimental temperature was controlled using a water bath (Olabo, model HH-S6). A Kelong KLX305 DC power source was used to control the current density during electrodeposition. The sample after electrodeposition was dried in a Geruida GRD220H oven.

After obtaining 16 groups of experimental samples, PTFE (purchased from Bukraun) was used as the anode, and the experimental sample was used as the cathode to fabricate the TENGs. The open-circuit voltage was measured using an oscilloscope DS1102E (produced by Rigol). The short-circuit current was tested using an electrochemical workstation (CH, model CHI660E). The crystal structure of the samples was analyzed using a Bruker D8 Advance X-ray diffractometer. A scanning electron microscope (Coxem, model EM-30) was used to observe the nanocrystalline structure of the samples in detail.

The copper surface was pretreated by polishing the copper sheets with sandpaper of 1000, 3000, and 5000 mesh. Subsequently, the copper was acid deoiled to remove organic stains on the surface and copper oxide was activated at the same time. After acid oil removal, the copper sheets were washed with deionized water at 25 and 50 °C, and the residuals from the previous process were cleaned to avoid polluting the electroplating solution. Different pH values were set using 1 M sulfuric acid. Copper sulfate pentahydrate of different concentrations (50 mL) was added to the electroplating solution.

The electroplating process was based on an orthogonal test design for 16 sets of experimental conditions. First, the electrolytic cell was filled with electrolyte and the pole plate was immersed into the electrolyte. The deposition area was set to 9 cm2 by adjusting the position of the anode copper sheet and the cathode copper sheet immersed in the electrolyte. The distance between the anode and cathode plates was fixed at 5 cm to avoid the impact of plate spacing on the nanomorphology of the electrodeposited copper. The current was set according to the required current density. The plating solution was heated to a fixed temperature using a water bath, and the electrodeposition was carried out for a period of 30 s.

The influence of the nanomorphology on the output performance of the TENG was assessed through the “contact and separation” method. One cyclic period of contact and separation was set to 1.5 s (contact of 0.75 s and separation of 0.75 s). The applied force from the mechanical shaker was fixed at 100 N. Output voltage and current were measured using a digital oscilloscope and an electrochemistry workstation.

At the beginning of the experiment, Cu and PTFE are in contact through an external force. The surface charge on Cu is positive, and that on PTFE is negative (Figure 3a). A separation is caused by the removal of the external force, and electrons flow from the PTFE electrode to the Cu electrode (Figure 3b). Then, charge exchange is carried out at the contacts. Electrical equilibrium is formed when the Cu and the PTFE are separated by a greater distance (Figure 3c). When the external force is applied again to bring Cu and PTFE into contact, electrons will flow from the Cu electrode through an external load to the PTFE electrode (Figure 3d).

According to the observation of the diameter of the nanoscale blocks grown in the above experiments, it can be concluded that at high temperatures and small pH values, the copper nanoscale topography grows more finely. When solution concentration and current density are high, and when the flow rate of the plating solution is low, the electrodeposited copper nanoscale structures will agglomerate.

The XRD data (Figure 4) were processed using the JADE software to calculate the average particle sizes. SEM micrographs were screened according to the surface morphology size of the nanoparticles and colored according to the nanoscale topography size (Figure 5 and Figure 6). After the size screening, the proportion of each particle size was calculated. The particle size distribution plays a vital role in improving the output performance. The nanocrystals can be divided into pyramids, spheroids and strips. The shape of the metal nanocrystals determines the distribution of surface charge density, which, in turn, influences output current and voltage.

Experiments 4, 5, and 15, which are shown in Figure 5 and Figure 6, respectively, yielded pyramidal copper nanoparticles with sharp surfaces. Among them, experiments 4 and 5 improved the output performance only by 18% to 19%, and the improvement is not obvious (Figure 9). This is because the particle size distributions are too large. This can be seen intuitively in the COMSOL displacement simulation below in Figure 11. However, the charge density at the sharps tips is higher than that at the spherical strips, which is very obvious in experiment 15. The particle size distribution of experiment 15 is relatively concentrated, and its improvement on the output performance reaches 34%, almost twice that of experiments 4 and 5 (Figure 9).

Nanostructured surfaces with different particle size distributions were prepared under different experimental conditions. According to the particle shapes, the nanostructures have been divided into three types labeled “Struct. A” (pyramidal), “Struct. B” (strips), and “Struct. C” (spheroidal) (Figure 11). A COMSOL simulation can explain the differences in output performance caused by the different particle shapes. Taking pyramidal structures as an example, it can be seen in the simulated displacement image that when a pressure of 3 MPa is applied to the PTFE surface at the top of the Cu nanoparticles, the surface structure of the PTFE polymer is bent (Figure 11). The large nanostructures on both edges are in contact with the polymer surface, but the small nanostructure in the middle is not in contact with the polymer. A two-dimensional model (modeled according to the size distribution) was created to represent different surface morphologies. In addition, the potential distribution of different shapes was simulated, and different surface charge densities of the different shapes are given. It can be concluded that nanocrystal strips can yield a good electron output. Due to the different surface contact charge densities of the copper nanoscale morphology, under pressure, the curved PTFE structure transfers more friction charges, which contributes greatly to improving the output performance.

In addition, the electrodeposition rate of copper and the size of electrodeposited copper nanocrystals can be adjusted via the current density. The temperature has an appreciable influence on the mass transfer of Cu2+ ions in the plating solution, which affects the growth of electrodeposited copper nanoparticles. Temperatures that are too high will increase the total resistance of the system. The concentration of copper ions has a decisive effect on the growth density of the copper nanocrystals. These conclusions may help in improving the output performance of TENGs through the control of the metal surface morphology.

Simulation of gas sensing with a triboelectric nanogenerator

© 2022 Wang et al.; licensee Beilstein-Institut.
This is an open access article licensed under the terms of the Beilstein-Institut Open Access License Agreement (https://www.beilstein-journals.org/bjnano/terms), which is identical to the Creative Commons Attribution 4.0 International License (https://creativecommons.org/licenses/by/4.0). The reuse of material under this license requires that the author(s), source and license are credited. Third-party material in this article could be subject to other licenses (typically indicated in the credit line), and in this case, users are required to obtain permission from the license holder to reuse the material. 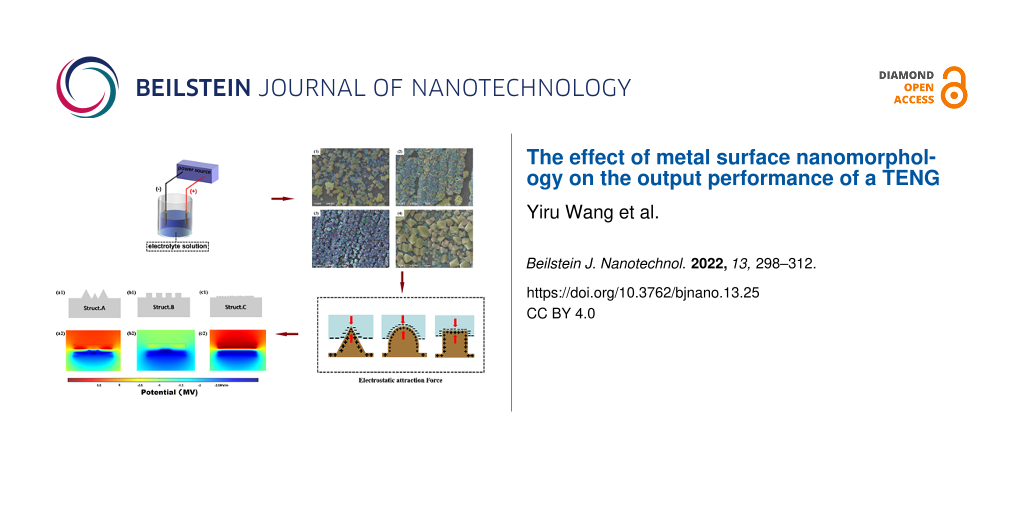