Institute of Electronic Engineering and Nanotechnologies of the Technical University of Moldova, Academiei 3/3, Chisinau 2028, Moldova

The twenty-first century is marked by an explosive growth in the flow of information, which is necessary to process, archive, and transmit data through communication systems. For that purpose, big data centers with powerful supercomputers have been created all over the world, consuming a huge amount of electricity. For example, just one of thousands of big data centers worldwide, located in the town of Lulea, Sweden [1] consumes 9% of the electricity of the entire country. On the other hand, during the last four decades, the triumphal development of microelectronics and computers, based on traditional semiconductor chips, was enabled by the exponential growth of the number of transistors in chips and the shrinkage of the size of individual transistors, following the empirical Moore’s Law, which is now showing slowing-down and failure signs [2].

To overcome these problems concerning increasing energy demands, a revolutionary solution is needed with two goals to be simultaneously reached: energy saving and increase in the capability of novel computers. The future of high-performance computing with low energy consumption is clearly associated with technologies with drastically lower energy dissipation.

А logical solution and the most promising candidate for radical reduction in energy consumption is the superconducting digital technology (SDT) based on Josephson junctions. The intrinsic Josephson effect, which was first reported by Reinhold Kleiner, Paul Müller, and co-workers (see [4,5] and references therein) has been investigated by many researchers [6-8]. The energy consumption of the SDT basic element is of the order of 10−19 J, corresponding to up to seven orders of magnitude less energy dissipation than that for their semiconductor analog, even when the energy for cryogenic cooling of superconducting circuits is considered [9-12]. Important and promising applications of the Josephson effect are its implementation in superconducting high-frequency electronics, spintronics, and nanostructures for supercomputers. In the last decade, a very rapid development in superconducting spintronics, based on functional nanostructures and Josephson junctions, has taken place [13,14]. The implementation of such devices in building blocks for quantum computers and for novel computers using non-von Neumann architecture with brain-like artificial neural networks (ANN) is a recent important development.

The main goal of this thematic issue is to highlight new research done in the field of hybrid nanostructures, including various elements using the Josephson effect and their applications in quantum electronics, spintronics, and high-frequency electronics.

The following novelties are presented in the contributed articles of this volume:

- Implementation of Josephson junctions for the design of quantum computers by analyzing the dynamics of a single-junction superconducting interferometer as an adiabatic neural cell of a perceptron artificial neural network in the quantum regime (a hybrid system whose configuration is dynamically adjusted by a quantum co-processor) [23].

- In several articles of the volume, new phenomena are predicted and investigated for promising spintronics applications, such as:

In addition, the volume also highlights some other interesting effects in S/F functional nanostructures, which may be implemented in future spintronics devices.

The concept of this thematic issue was developed during the International SPINTECH Conference “NANO-2021: The 12th International Conference on Intrinsic Josephson Effect and Horizons of Superconducting Spintronics”, which took place in September 2021 in Chisinau, Moldova. The presentations of the participants of the conference incorporating new ideas, technological approaches for the design of functional nanostructures for superconducting spintronics, quantum electronics, and novel base elements for superconducting supercomputers became the core of this volume.

The editors are convinced that this thematic issue will attract the attention of scientists, technologists, engineers, and IT experts, and will be useful for a broad readership including students wishing to extend their knowledge in this new, rapidly developing, and highly promising area.

We are thankful to the Production Team of the Beilstein-Institut for their professional and continuous and friendly editorial support.

© 2023 Sidorenko et al.; licensee Beilstein-Institut.
This is an open access article licensed under the terms of the Beilstein-Institut Open Access License Agreement (https://www.beilstein-journals.org/bjnano/terms), which is identical to the Creative Commons Attribution 4.0 International License (https://creativecommons.org/licenses/by/4.0). The reuse of material under this license requires that the author(s), source and license are credited. Third-party material in this article could be subject to other licenses (typically indicated in the credit line), and in this case, users are required to obtain permission from the license holder to reuse the material. 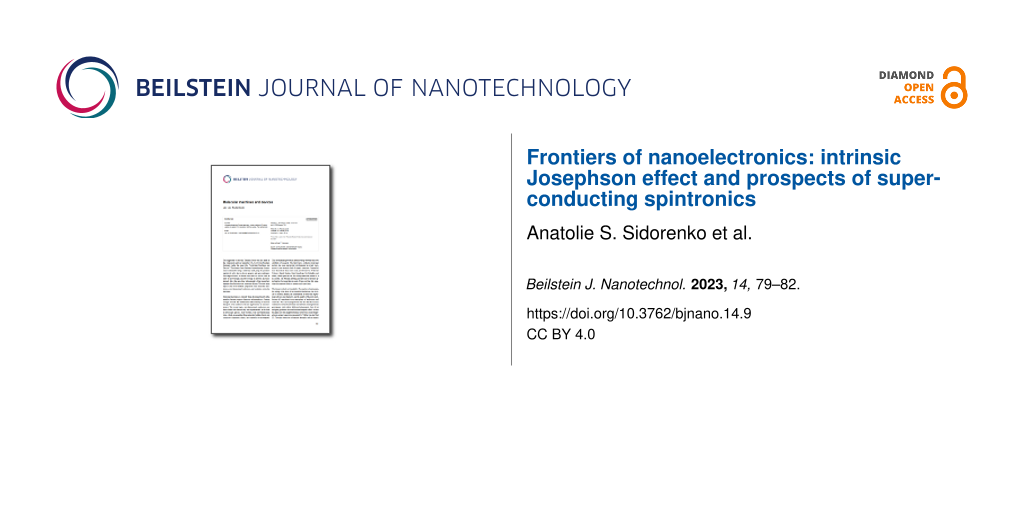