This article is part of the Thematic Series "Physics, chemistry and biology of functional nanostructures".

Nanoscience emerged as a field addressing phenomena that are strongly related to and influenced by their length scale being in the nanometer range. From the very beginning its interdisciplinary character became obvious. Meanwhile, after nanoscience had left its infancy, this characteristic feature developed even further by extension of the contributing disciplines: Initially it was supported and pushed forward by physics, materials science and chemistry, with a strong interrelation with semiconductor/information technology with their road maps for the downscaling of switching and storage devices. Today, biology and thus, in a natural way, medicine are included, opening new research areas within nanoscience. As a consequence of this development towards a real transdisciplinary field of science, worldwide collaborative research networks have been installed encompassing physics, materials science, chemistry and biology as well as various areas of engineering.

One such network with focus on “Functional Nanostructures” has been successfully active for almost ten years in Baden-Württemberg (Germany) [1]. Recent results from this network form the nucleus of the present Thematic Series “Physics, chemistry and biology of functional nanostructures” in the Beilstein Journal of Nanotechnology, complemented by contributions from international groups outside this network.

Besides the interdisciplinary approaches of nanoscience, its ongoing success can be attributed to at least three more necessary conditions:

All three of these conditions together with the given examples play a major role in the present Thematic Series, which, in turn, stands alongside previous series. Of special interest appear those reports dealing with self-assembly on solid surfaces, micro- and mesoporous solids, electrical transport through nanostructures, nanooptical aspects, organic–inorganic hybrids and properties of magnetic nanoparticles. A much broader view on biomimetic approaches can be found in [8]. The choice of these recommendations becomes obvious on summarizing the main topics of the present Thematic Series:

Of course, the contributions to this Thematic Series form just a snapshot of the current activities focused on functional nanostructures. We hope, however, that our choice, which was guided by the idea to present interesting examples for the three general conditions given above, will be found inspiring by the readers as well. We give thanks to all colleagues for the valuable reports on their research and the Beilstein team for the engaged editorial work.

© 2012 Ziemann and Schimmel; licensee Beilstein-Institut.
This is an Open Access article under the terms of the Creative Commons Attribution License (http://creativecommons.org/licenses/by/2.0), which permits unrestricted use, distribution, and reproduction in any medium, provided the original work is properly cited.
The license is subject to the Beilstein Journal of Nanotechnology terms and conditions: (http://www.beilstein-journals.org/bjnano) 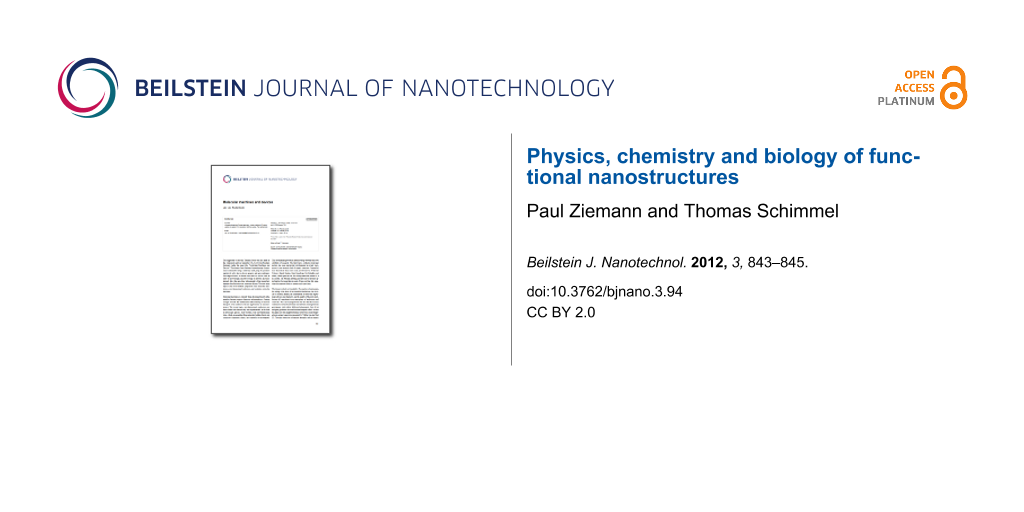