All articles from this author
Lisha Yin


All articles from this author
Shaowen Cao


All articles from this author
Yusen Liao


All articles from this author
Can Xue

Pt@TiO2 core–shell nanostructures were prepared through a hydrothermal method. The dye-sensitization of these Pt@TiO2 core–shell structures allows for a high photocatalytic activity for the generation of hydrogen from proton reduction under visible-light irradiation. When the dyes and TiO2 were co-excited through the combination of two irradiation beams with different wavelengths, a synergic effect was observed, which led to a greatly enhanced H2 generation yield. This is attributed to the rational spatial distribution of the three components (dye, TiO2, Pt), and the vectored transport of photogenerated electrons from the dye to the Pt particles via the TiO2 particle bridge.

Since Honda and Fujishima reported the effective hydrogen evolution from water splitting by a TiO2 and Pt electrode in a photoelectrochemical cell in the early 1970s [1], TiO2 has received extensive attention as one of the promising semiconductor photocatalysts, because of its high chemical stability, low cost and non-toxicity [2-5]. However, it suffers from the wide band gap (3.2–3.4 eV), which restricts the utilization of visible light, and the high recombination rate of photogenerated electrons and holes often leads to low quantum yields and a poor photocatalytic activity [6]. Tremendous efforts have been made to improve the photocatalytic performance of TiO2. One typical strategy is prolonging the lifetime of the electron–hole pair through deposition of noble metal (e.g., Pt) nanoparticles as co-catalysts that can act as electron-sinks to achieve effective charge separation on TiO2 [7-11]. Dye-sensitization has been widely used to enable visible light harvesting by wide band gap semiconductors. Since the seminal work reported by O’Regan and Grätzel in 1991 [12], various types of dyes have been explored, and some of them allow for the reduction of protons into hydrogen gas through visible-light-driven photocatalytic processes [13-17]. Herein, we use erythrosin B (ErB) sensitized Pt@TiO2 core–shell nanoparticles for the highly-efficient photocatalytic generation of hydrogen under visible-light irradiation. In this rational design of the ternary structure, the TiO2 particle acts as a bridge that allows for the effective electron transfer pathway of excited ErB→TiO2→Pt. Importantly, we found that when the TiO2 bridges are excited simultaneously, the dye-sensitization-driven H2 evolution showed a much higher efficiency as compared to the situation with no excitation of TiO2. This kind of synergic effect reveals a new direction for improving the efficiency of composite photocatalysts by using selective excitation wavelengths.

The Pt@TiO2 core–shell nanoparticles were prepared trough a hydrothermal process by using Pt nanoparticles and TiF4 as the precursor. The crystalline structure was determined by XRD, as shown in Figure 1. After the hydrothermal reaction, the TiO2 was transformed into anatase phase, which could be well indexed to the standard anatase TiO2 (JCPDS Card No. 83-2243). The three additional diffraction peaks shown in Figure 1 could be assigned to the face-centered metallic Pt phase, with the positions at 40.0o, 46.6o and 67.9o representing the spacing of the (111), (200) and (220) planes, respectively. This indicates the retaining of the Pt nanoparticle cores after the hydrothermal reaction. As a control sample, Pt/TiO2 was prepared through the photodeposition of Pt (1% in mole fraction) onto pure TiO2 particles that were prepared through the same hydrothermal method without using Pt nanoparticles. Due to the low Pt loading, we could only observe a weak diffraction peak at 40o corresponding to the Pt (111) lattice spacing, which could indicate successful loading of metallic Pt nanoparticles onto TiO2 particles. The molar ratio of Pt to Ti was estimated to be about 6.7% according to EDX analysis (Figure S1, Supporting Information File 1).

The core–shell morphology of the prepared Pt@TiO2 nanostructures was confirmed by TEM and SEM examination. As shown in Figure 2A and 2B, the core–shell particles appear as flower-like structures, in which the Pt nanoparticles as the cores show an average diameter of 30 nm, and the TiO2 shell thickness is around 60 nm. The HRTEM image (Figure 2C) indicates lattice distances of 0.228 nm and 0.341 nm, which correspond to the (111) spacing of the core Pt particle and the (101) spacing of the anatase TiO2 shell. The SEM image (Figure 2D) reveals that these core–shell Pt@TiO2 structures appear like a large particle with scraggy surfaces and an average diameter of about 150 nm. These observations confirm that all Pt nanoparticles are well encapsulated by TiO2 shells. Nevertheless, we note that the TiO2 shell does not compactly cover all Pt surfaces, which allows for the proton reduction and H2 evolution on the uncovered surface area of Pt. For the control sample Pt/TiO2, the TiO2 particles were synthesized through a hydrothermal method that was followed by the photodeposition of Pt nanoparticles, as shown in Figure S2 (Supporting Information File 1). The TiO2 particles are in a solid spherical shape and composed by nanoparticle aggregation, and the average diameter of deposited Pt nanoparticles is about 5 nm.

Figure 3 shows the UV–vis diffuse reflectance spectra of the Pt@TiO2 core–shell nanostructures and the Pt/TiO2 control sample. The absorption from 250 to ca. 380 nm can be attributed to the band edge absorption of anatase TiO2. The band gaps of both samples are calculated according to the modified Kubelka–Munk function

vs the energy the of absorbed light, E [18]. And the plots shown in the inset of Figure 3 reveal the band gap value as 3.3 eV for Pt@TiO2 and 3.2 eV for Pt/TiO2, which indicates that the combination of Pt nanoparticles with TiO2 did not significantly influence the band gap energy of the TiO2 component.

The photocatalytic tests were carried out by suspending the Pt@TiO2 sample (5 mg) in an aqueous solution containing 0.2 wt % ErB and 15 wt % triethanolamine (TEOA) that acts as the electron donor. In this study, we employed two different irradiation wavelengths for the purpose of separating the excitation of TiO2 and ErB, which will help us to explore the potential synergic effect between the two excitations. The primary irradiation with a wavelength of 550 ± 20 nm (light A) is to excite ErB since the main absorbance peak of ErB is located at about 550 nm. A secondary irradiation with a wavelength of 400 ± 10 nm (light B) is to excite the defect/impurity states of TiO2, while ErB exhibit a minimum absorption in this range.

As shown in Figure 4, after the individual irradiation with light A (550 ± 20 nm) or light B (400 ± 10 nm) for 2 h, the ErB-sensitized Pt@TiO2 core–shell structure showed generated H2 amounts of 4.5 μmol and 5.3 μmol, respectively. However, when light A and light B are used simultaneously, to our surprise, the 2 h irradiation led to a H2 amount of 15.9 μmol, which is significantly higher than the sum of the two generated H2 amounts under individual irradiation of light A and B (9.8 μmol). This observation suggests that in the ErB-sensitized Pt@TiO2 core–shell structure, a synergic effect exists between the excitation of ErB and TiO2, which plays an important role in the photocatalytic hydrogen generation.

The observed synergic effect could be attributed to the electron transport in TiO2 particles. Since the dye-sensitization induces an electron transfer from the excited ErB to TiO2, these electrons have to be transported through the TiO2 particles with a maximum distance of ca. 60 nm to reach the Pt surface for the reduction of protons to H2. When TiO2 is simultaneously excited by the 400 ± 10 nm light, though it is weak, the charge carrier concentration in TiO2 becomes higher, which increases the conductivity of TiO2. Thereby, the vectored electron transfer from ErB to the core Pt particle via TiO2 bridges becomes more effective, which leading to enhanced yield of H2. The principle is depicted in Figure 5, and the energy diagram is shown in Figure S3 (Supporting Information File 1).

In comparison, under individual irradiation of light A or light B for 2 h, the Pt/TiO2 sample showed a H2 generation of 5.3 μmol and 1.9 μmol, respectively. While the simultaneous irradiation with light A and B for 2 h led to the generation of 7.9 μmol H2, which is only slightly higher than the sum of the H2 generation amount under individual irradiation of light A and B (7.2 μmol). This indicates that the synergic effect may also exist in the Pt-loaded TiO2 particles, but with a less significant role as compared to the Pt@TiO2 core–shell structure. This may be because the post-loaded Pt nanoparticles are randomly distributed on the outer surfaces of TiO2 particles, thus the electron transfer path from ErB to Pt becomes less oriented through TiO2. In addition, the Pt nanoparticles would occupy some reactive sites on the TiO2 surface, which also reduces the efficiency of the dye-sensitization.

We have prepared Pt@TiO2 core–shell nanostructures through a one-step hydrothermal method. Upon ErB sensitization, the Pt@TiO2 core–shell photocatalysts exhibit high visible-light activity for the generation of H2 from proton reduction. Significantly, we observed a synergic effect that allows for a greatly enhanced activity for the H2 generation when the ErB and TiO2 are co-excited through the combination of two irradiation beams at different wavelengths. The enhancement is attributed to the rational spatial distribution of three components (ErB, TiO2, Pt), and the vectored transport of photogenerated electrons from ErB to Pt particles via the TiO2 particle bridge. The presented core–shell structures and the observed synergic effect would provide a new direction for improving the efficiency of composite photocatalysts by using selective excitation wavelengths.

Preparation of Pt@TiO2 core–shell nanostructures: The Pt@TiO2 core–shell nanostructures were synthesized through a hydrothermal method. Typically, 15 mL solution of the as-prepared 30 nm Pt nanoparticles was mixed with 4.5 mL aqueous solution of TiF4 (0.04 M). The mixture was kept stirring for 10 min, diluted into 80 mL DI water, and then transferred into a 100 mL Teflon-lined stainless steel autoclave, which was treated at 180 °C for 24 h. After that, the product was cooled down to room temperature, centrifuged and washed with deionized water for three times, and dried in a vacuum oven.

Characterizations: The crystalline phases of the samples were examined by powder X-ray diffraction (XRD) on a Shimazu XRD-6000 X-ray diffractometer (Cu Kα radiation) with a scanning speed of 2°/min in the 2θ range from 20 to 80°. Diffuse reflectance UV–vis spectra were acquired on a Lambda 750 UV–vis–NIR spectrophotometer (Perkin Elmer, USA). The morphology of the Pt@TiO2 nanocomposites were investigated by field emission scanning electron microscopy (SEM, JEOL JSM-7600F) with energy-dispersive X-ray analysis system and transmission electron microscopy (TEM, JEOL JEM-2100) at an accelerating voltage at 200 kV.

Photocatalytic generation of H2 with erythrosin B-sensitized Pt@TiO2 core–shell particles: In a typical run, 5 mg Pt@TiO2 photocatalyst was dispersed into 10 mL of an aqueous solution containing triethanolamine (TEOA, 15 wt %) as electron donor and erythrosin B (0.2 wt %) as the photo-sensitizing dye. The suspension was sealed in a quartz vessel and purged with Argon for 30 min to remove the residual oxygen. After that, the vessel was exposed under a 300 W Xenon lamp (MAX-302, Asahi Spectra Co. Ltd.) coupled with a band pass filter (λ = 400 ± 10 nm or 550 ± 20 nm) to evaluate the photocatalytic H2 generation yield. The gas products were analyzed periodically by an Agilent 7890A gas chromatograph (GC) with a thermal conductivity detector (TCD).

© 2014 Fang et al; licensee Beilstein-Institut.
This is an Open Access article under the terms of the Creative Commons Attribution License (http://creativecommons.org/licenses/by/2.0), which permits unrestricted use, distribution, and reproduction in any medium, provided the original work is properly cited.
The license is subject to the Beilstein Journal of Nanotechnology terms and conditions: (http://www.beilstein-journals.org/bjnano) 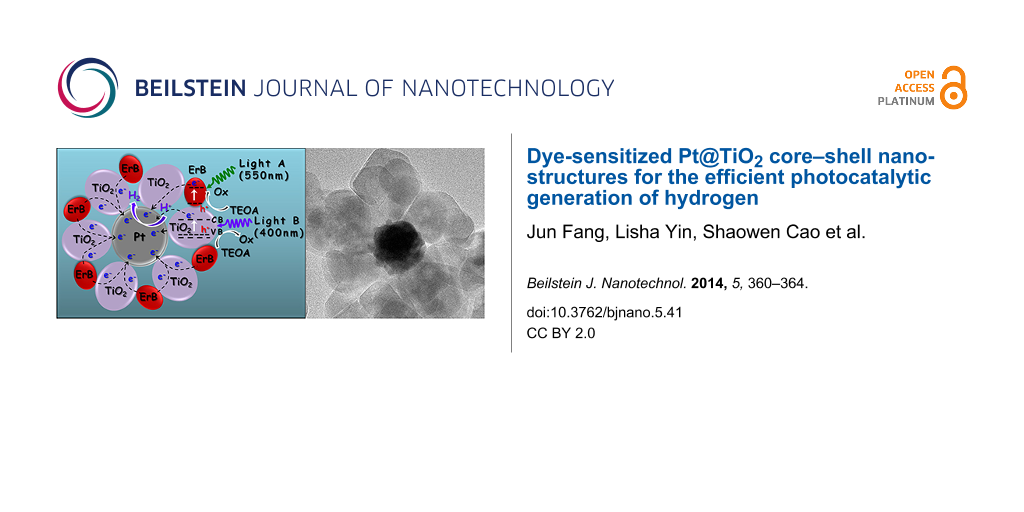