All articles from this author
Yuantong Gu

Recently, the capture and storage of CO2 have attracted research interest as a strategy to reduce the global emissions of greenhouse gases. It is crucial to find suitable materials to achieve an efficient CO2 capture. Here we report our study of CO2 adsorption on boron-doped C60 fullerene in the neutral state and in the 1e−-charged state. We use first principle density functional calculations to simulate the CO2 adsorption. The results show that CO2 can form weak interactions with the BC59 cage in its neutral state and the interactions can be enhanced significantly by introducing an extra electron to the system.

The continuous dependence on fossil fuel combustion for the generation of energy has dramatically increased the atmospheric CO2 concentrations over the last century. Despite concerns for global climatic changes and many attempts to sustainably generate energy, fossil fuel combustion continues to be the main source of electricity while releasing 13 Gt of CO2 [1] to the atmosphere each year. Therefore CO2 capture and storage (CCS) technology is a promising solution to reduce atmospheric CO2 emissions [2]. Solvent absorption that is based on amines is the most common technology for the capture of CO2. However this method is criticized for its very high energy consumption and operational limitations such as corrosion, slow uptake rates, foaming and large equipment. Hence there is a huge interest in solid adsorbent materials for CCS [3-6]. In past few years metal organic frameworks (MOFs) have emerged as solid CO2 adsorbent materials due to their tuneable chemical and physical properties.

Sun et al. [8] predicted an enhanced CO2 adsorption on 1e−- and 2e−-charged boron nitride sheets and nanotubes, which show very little chemical affinity towards CO2 in their neutral state. Also Sun et al. [18] showed that chemical interactions between boron–carbon nanotubes (B2CNT) and CO2 can be enhanced by introducing extra electrons to the system. The enhanced interaction of CO2 with adsorbent materials by electron injection has been further proved by Jiao et al. [19]. Therefore, we will investigate the CO2 adsorption on BC59 fullerene in both the neutral and the 1e−-charged states.

First-principles density functional theory (DFT) calculations were carried out to study CO2 adsorption on the BC59 cage. The BC59 structure was fully optimized in the given symmetry. The calculations were carried out at B3LYP [20-22] level of theory while using the split valance polarized basis set 6-31G(d). B97d [23,24] with the same basis set was used for calculations when non-covalent interactions are predominant. The CO2 adsorption on BC59 was studied in the neutral state and in the 1e−-charged state. The electron distribution and transfer were analysed with Mulliken population analysis method [25]. The adsorption energies were calculated using the following equation.

where Eads is the adsorption energy,

are the energies of the isolated BC59 cage and CO2 molecule, respectively. For a favourable adsorption the calculated adsorption energy should have a negative value. To provide more accurate results for the chemisorption energy the counterpoise corrected energy [26,27] was also calculated.

The transition state was located by using the synchronous transit-guided quasi-Newton (STQN) method [28,29], which was then fully optimized by using the Berny algorithm at the B3LYP/6-31G(d) level. The optimized transition structure was used for IRC calculations at the same level of theory [30,31]. All calculations were carried out by using the Gaussian 09 package [32]. The GaussView 5 package [33] was used to visualize the optimized molecular structures, molecular orbitals and charge distributions.

The substitution of a C atom in the C60 fullerene by a B atom causes a charge transfer between C and B atoms, which results in an unbalanced charge distribution in the fullerene cage. The unbalanced charge distribution forms B–C complex sites for the adsorption of CO2 (Figure 1). Here we considered two possible sites for the CO2 adsorption: the B–C atomic site between two hexagonal rings (HH B–C site) and two identical B–C sites between a hexagonal ring and pentagonal ring (HP B–C site).

Adsorption of CO2 on uncharged BC59 fullerenes

According to our simulation results, the CO2 molecules can only form weak interactions with BC59 cage in its neutral state. The physisorption energy is a weak −2.04 kcal/mol (−4.1 kcal/mol for B97D/6-31G(d) calculations) and the weak interactions are mainly van der Waals interactions between the CO2 molecule and the adsorbent. The CO2 physisorbed configuration is shown in Figure 2. The CO2 molecule sits parallel to the boron–carbon plane of the BC59 fullerene cage. The B…O and C…O bond distances are 3.25 Å and 3.71 Å, respectively. The CO2 molecule undergoes very slight structural changes upon physisorption on the uncharged BC59 fullerene cage. The O–C–O angle is slightly bent to 179.7° and the changes to the C=O bond lengths are negligibly small. The doped fullerene cage hardly undergoes any structural change. The charge transfer between CO2 and BC59 is only 0.008e.

Effects of charges on the structure

Kim et al. [34] predicted that C59B− should be a stable entity because of the isoelectronic configuration with C60. This claim is further validated by experimental observations by Dunk et al. [15]. The Mulliken charge analysis and the electron density distributions of the lowest unoccupied molecular orbitals (LUMO) are adopted to assess the influence of changing the charge state of BC59. Figure 3 shows that the LUMO of the neutral BC59 is noticeably concentrated on the B atom and the neighbouring C atoms. Furthermore experimental results of Guo et al. [13] showed that boron doping creates an electron defficient site at the B atom. This suggests that an additional electron added to the system will be accepted by the B atom. This hypothesis is consistent with theoretical predictions of Kurita et al. [17] and Xie et al. [35], who stated that the doped B atom in C60 fullerene acts as an electron acceptor. The comparison of the Mulliken population analysis of the neutral and the 1e−-state of BC59 proves that the negative charge introduced to the system is essentially accepted by the B atom. The Mulliken atomic charge of the B atom in the BC59 structure in the neutral state has changed from 0.138 to 0.012 upon the introduction of the negative charge, while as shown in Figure 4 the charges on the C atoms are not changed significantly.

CO2 adsorption on BC59 fullerene in the 1e−-state

The CO2 molecule undergoes considerable distortion upon chemically adsorbing on the 1e−-charged BC59 fullerene. A C=O bond of the CO2 molecule is broken when one oxygen atom forms a bond with the boron atom (which will be referred as Oa in the following discussion and the other oxygen atom as Ob) and the C atom of the CO2 molecule forms a bond with the C atom on the HH B–C site of the cage structure. The linear O–C–O bond of CO2 is bent to 128.0° in the adsorbed form. The C=Ob bond which is originally 1.169 Å (experimentally 1.162 Å [37]) is elongated to 1.208 Å, while the length of the C–Oa bond is expanded to 1.336 Å.The adsorption site of the BC59 fullerene also undergoes considerable stretching. The HH B–C site is protruded outwards by about 0.05 Å. The B–C bond of the HH B–C site has stretched from 1.496 to 1.672 Å. The Mulliken population analysis shows that a charge transfer of 0.42 has occurred from the BC59 fullerene to the CO2 molecule. Comparison of the charge distribution on BC59− before (Figure 4b) and after (Figure 5c) CO2 adsorption, confirms that the injected electron is occupied by the CO2 molecule.

The higher adsorption energy and the significant distortions in the structure confirm a stronger interaction between CO2 molecule and negatively charged BC59 than its neutral state. These interactions can be explained due to the Lewis acidity of CO2, which prefers to accept electrons [18]. On the other hand the B atom of the BC59 becomes less positively charged upon the addition of an extra electron. Therefore it becomes more likely to donate electrons to the CO2 molecule leading to stronger interactions between the two molecules.

Figure 6 shows the minimum energy pathway for the adsorption from the physisorbed state to the chemisorbed configuration. We performed frequency calculations on the optimized transition structure, which confirms that it is a first order saddle point and hence an actual transition structure. From this figure, the activation barrier for the chemisorption is estimated to be 13.25 kcal/mol (55.43 kJ/mol). The low barrier of the reaction indicates that the reaction is energetically favourable.

For the desorption step, the removal of the added charge will decrease the stability of the bond between CO2 and the doped fullerene. The thermodynamic analysis of the reaction shows that the CO2 chemisorption is spontaneous only for temperatures less than 350 K. Therefore we suggest a method of manipulating the charge state and the temperature of the system for adsorbent recycling. Charging the system can be achieved by electrochemical methods, electrospray, and electron beam or gate voltage control methods [8].

By using DFT calculations we have studied the adsorption mechanisms of CO2 on a C60 fullerene cage, in which a single C atom is substituted by a B atom. Our calculation results show that the BC59 cage, in its neutral state, shows a low chemical interaction with CO2 molecule, which only physisorbs with Eads = −2.04 kcal/mol. However CO2 adsorption on the BC59 can be significantly enhanced by injecting negative charges into the structure. The CO2 molecule chemisorbs on the 1e−-charged BC59 with Eads = −15.41 kcal/mol. This study suggests that we can conclude 1e−-charged BC59 cage structure is a promising CO2 adsorbent.

© 2014 de Silva et al; licensee Beilstein-Institut.
This is an Open Access article under the terms of the Creative Commons Attribution License (http://creativecommons.org/licenses/by/2.0), which permits unrestricted use, distribution, and reproduction in any medium, provided the original work is properly cited.
The license is subject to the Beilstein Journal of Nanotechnology terms and conditions: (http://www.beilstein-journals.org/bjnano) 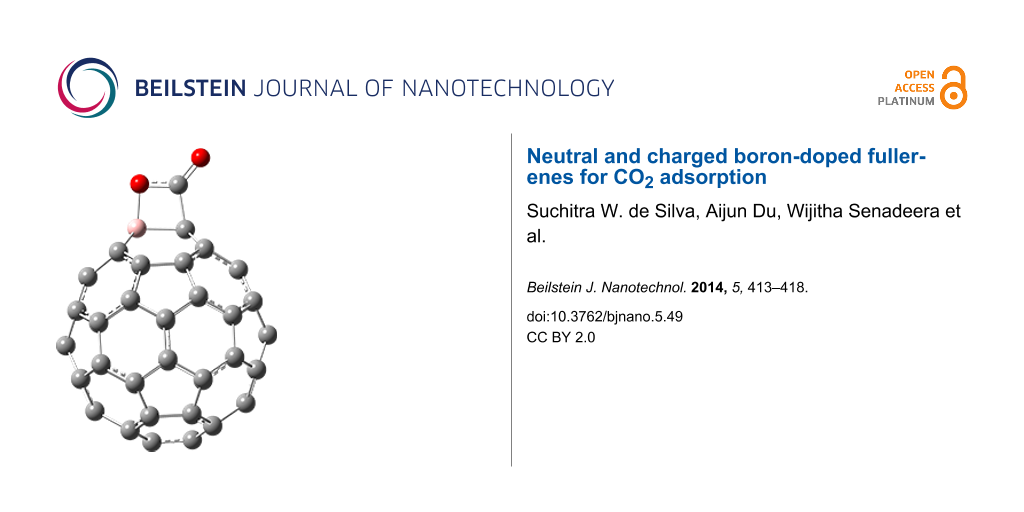