All articles from this author
Shogo Abe


All articles from this author
Kotaro Kajikawa


All articles from this author
Masayuki Shimojo

This article is part of the Thematic Series "Focused electron beam induced processing".

Plasmonic waveguides and circuits utilizing localized surface plasmon resonance (LSPR) are attracting attention for future optical transmission, sensor, and data processing devices. The development of these LSPR-based structures would lead to a reduction in the size of optical circuits and devices [1,2]. Light energy can be propagated through nanometer-sized wires or through rows of particles due to the LSPR effect. Gold and silver nanowires or particles can be used for such waveguides, as these materials interact with visible light.

Plasmon propagation through nanowires has been experimentally investigated. Sanders et al. [3] showed the propagation of plasmons in silver nanowires and the emission of photons at the end of the nanowires. Branching is considered necessary to make integrated photonic/plasmonic circuits. The plasmon propagation on branched silver nanowires was also experimentally demonstrated [4]. However, most of these experiments were performed using nanowires placed on substrates without regard to their position. It is difficult to produce a branched nanowire with a designed shape and to place the nanowire at a desired position at the nanoscale.

It has been theoretically demonstrated that a plasmon can propagate through a chain of spherical metal nanoparticles [5]. According to these results, the nanoparticles should be placed at designated positions and close enough to neighboring particles for transmission at the nanoscale. Gwo et al. [6] fabricated nanoparticles in a line as well as in the form of other two- and three-dimensional structures with gold and silver nanoparticles using a nanomanipulator. This technique is fascinating, but it may be a time-consuming process for production of relatively large circuits.

Nanostructures have also been fabricated using focused ion beam- or focused electron beam-induced deposition [1,7]. However, nanostructures made by these techniques generally have low purity as they contain a large amount of carbon, and thus, the structures need to be coated with gold or silver for use in plasmonic devices. Therefore, a manageable, practical, and not too complicated technique for fabricating nanoparticle arrays of a designed shape is needed.

In this technique, the sample was made by implementing the following steps:

Step (i): Au nanoparticles are placed on a substrate.

Step (ii): Selected nanoparticles are immobilized on the substrate by electron beam irradiation.

Step (iii): The unfixed nanoparticles are removed from the substrate.

A schematic illustration of this process is shown in Figure 1. Two methods were employed for step (i), the amine-epoxy method and the amino-undecanethiol method.

Figure 2 shows a scanning electron microscope (SEM) image of gold nanoparticles arranged on the substrate after step (i) using the amine-epoxy method. A similar arrangement technique has been previously published [8]. The length of the molecules attached to the gold particles controlled the distance between neighboring particles. In this method, a two-dimensional close packing of Au particles was partially obtained; however, particles were missing in some areas.

Figure 4 shows a SEM image of the sample that was irradiated over a relatively large, L-shaped area and processed after step (iii). Some close packed regions were left in the irradiated L-shaped area. Although the original distribution was not perfect and many particles were missing in the L-shaped area, it is demonstrated that the electron beam irradiation can immobilize the nanoparticles over a large area on the substrate.

To reveal the mechanism of nanoparticle immobilization, Raman spectroscopy was carried out after all process steps of the sample had been performed; however, the electron beam irradiated a large area. Figure 5 shows the Raman shift measured in the area of electron beam irradiation where the G-band (1580 cm−1) and D-band (1360 cm−1) of carbon are observed. The presence of these bands suggests that amorphous carbon or diamond-like carbon exists on the specimen. It should be noted that no such peaks were observed for the sample without electron beam irradiation (after the steps (i) and (iii)). Figure 6 shows a transmission electron microscope (TEM) image of a nanoparticle on an edge of the widely irradiated specimen, which was tilted in the microscope. An amorphous substance is observed in the gap between the substrate and the particle. A thin amorphous layer is also observed covering the particle. These results suggest that electron beam irradiation decomposes organic molecules formed on the surfaces of the substrate and the nanoparticles, and that the amorphous carbon was formed during step (ii). This amorphous carbon is considered to fix the particles onto the substrate.

In Figure 3, the spacing between neighboring particles is not uniform. This is probably because the original two-dimensional arrangement was not perfect, as shown in Figure 2. The result of the sample which underwent large area irradiation, as shown in Figure 4, further supports this reason. Thus, another method, the amino-undecanethiol method, was used for step (i).

Figure 7 shows a SEM image of the substrate after step (i) using the amino-undecanethiol method. Using this method, the distribution of nanoparticles becomes relatively uniform, as compared with the amine-epoxy method, though the two-dimensional close packing is not obtained. The electron beam was used to irradiate a rectangular area on the substrate prepared using the amino-undecanethiol method. A SEM image of this substrate after step (iii) is shown in Figure 8. Almost all particles remained in the irradiated area on the substrate, while most particles were washed away outside of the irradiated area.

This patterning process for nanoparticles, which combines both chemical and electron beam techniques, could contribute to the fabrication of single electron transistors [14], Fano resonance devices [15] and plasmonic waveguides, as the placement of gold nanoparticles on a substrate could be precisely controlled.

A novel technique for patterning by controlling the placement of gold nanoparticles on substrates was proposed. The technique combines a chemical reaction with electron beam irradiation. This technique could contribute to the fabrication of nanodevices such as plasmonic waveguides.

A polished Si wafer, with dimensions of about 3 × 1 mm, was used as the substrate. The substrate was immersed in a mixture (1:3 by volume) of hydrogen peroxide (30%) and concentrated sulfuric acid (98%) for 10 h to create a hydrophilic surface [16,17]. The substrate was then immersed in 3-glycidoxypropyltrimethoxysilane for 16 h. During this process, a self-assembled monolayer of molecules with an epoxy group was formed on the Si surface [18].

An ethanol solution (3 mL) of 2-aminoethanethiol (8 mmol/L) was added to a commercially available colloidal gold particle solution (3 mL) and stirred for 1 min. During this process, a monolayer of molecules with an amino group was formed on the gold surface [19].

Step (i): the amino-undecanethiol method

Finally, the irradiated substrate was rinsed in water during ultrasonication with a commercially available surface-active agent for the amine-epoxy method. For the amino-undecanethiol method, an amino-1-undecanethiol in an ethanolic solution was used instead of water. This step removed the unfixed particles on the substrate. Then, the sample, which consisted of the final substrate with immobilized particles, was observed using SEM.

The TEM observation and the Raman spectroscopy measurement were carried out on the specimen to reveal the mechanism of immobilization.

This work was supported by JSPS KAKENHI Grant Number 25390032.

© 2015 Noriki et al; licensee Beilstein-Institut.
This is an Open Access article under the terms of the Creative Commons Attribution License (http://creativecommons.org/licenses/by/2.0), which permits unrestricted use, distribution, and reproduction in any medium, provided the original work is properly cited.
The license is subject to the Beilstein Journal of Nanotechnology terms and conditions: (http://www.beilstein-journals.org/bjnano) 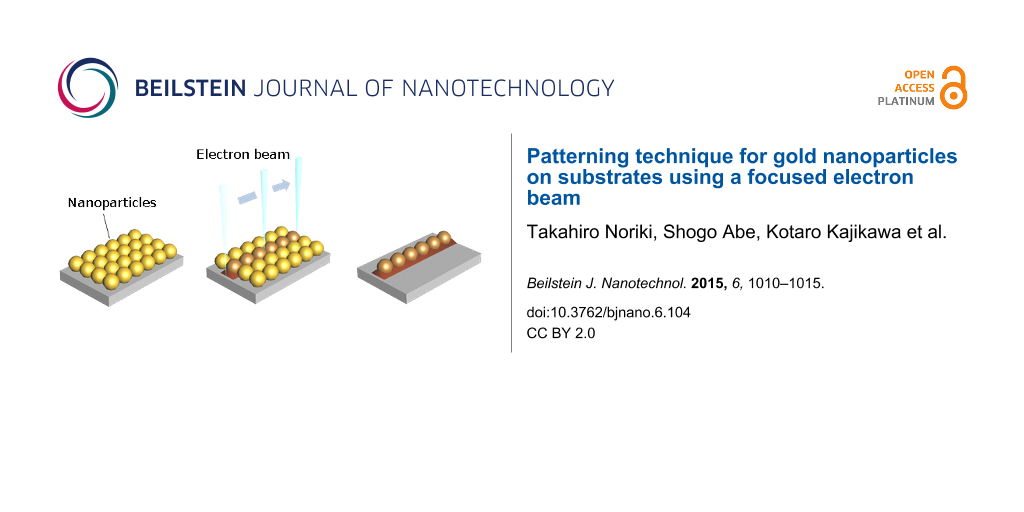