All articles from this author
Lianwei Chen


All articles from this author
Tsung-Sheng Kao


All articles from this author
Mengxue Wu


All articles from this author
Minghui Hong

Laser ablation in liquid (LAL) is a versatile technique to fabricate nanoparticles. Conventional synthesis of nanoparticles by chemical reactions is usually complicated and uses toxic materials. The chemically synthesized nanoparticles are easily contaminated by chemical precursors, additives or byproducts. LAL has many advantages, such as the simple, safe, and high purity properties of the generated nanoparticles, the variety of the target materials capable of being produced, and the in situ dispersion of the nanoparticles. The properties of the laser-generated nanoparticles, such as size, size distribution, composition, and structure for different target materials can be flexibly controlled by the laser parameters (e.g., wavelength, repetition rate, pulse duration, and laser fluence) and the properties of the environment (e.g., surfactant concentration, pH value, or size and length of ligands) [1-6]. Laser ablation is an explosive material removal process using strong pulsed-laser irradiation. The LAL process causes the ejection of nanoclusters into the environment to form a colloidal nanoparticle dispersion [7-9]. The nanoparticles have wide application in physics, chemistry, biology and engineering. One of the important applications is that the nanoparticles can be used as optical limiting materials for the protection of the human eye and in optical devices against high intensity light irradiation.

A material exhibiting the optical limiting effect has a decreased optical transmittance with increasing incident light intensity. A good optical limiter should have high transparency at low light irradiance, while it efficiently attenuates high incident light irradiance. Nonlinear optical material interactions, such as nonlinear absorption, refraction and scattering [10-12], are the main optical processes which contribute to optical limiting. Various materials have been found to exhibit optical limiting properties, such as fullerenes, metallophthalocyanines, carbon black suspension and nanoscale metallic materials [13-15].

The nanoparticle dispersions were fabricated by the LAL technique as schematically shown in Figure 1a. A solid target material was placed at the bottom of a beaker and immersed in 10 mL of deionized (DI) water. A fiber laser with a wavelength of 1064 nm, a pulse duration of ≈10 ns and a repetition rate of 100 kHz, was focused onto the surface of the target material with a spot size of ≈30 μm. The applied laser fluence was 12.5 J/cm2. The laser beam was programmed to scan over a 1 × 1 cm2 area 900 times. A square scanning pattern was chosen and the scanning speed was set at 1 mm/s. The entire process took about 5 min. The laser-generated nanoparticles were dispersed into the DI water. The dispersion was collected and sonicated for 30 min to ensure the uniform distribution of the nanoparticles in the DI water. The target materials included gold and silver of high purity. Silica microspheres (purchased from Thermo Scientific) with a diameter of 1 μm were used in this study. The number of microspheres per unit weight was calculated to be 9 × 1010 g−1. 0.2 mg of microspheres was uniformly dispersed in a 3 mL nanoparticle dispersion to form a hybrid material dispersion.

The laser-generated nanoparticles were characterized by scanning electron microscopy (SEM). The size distribution of the nanoparticles was estimated by analyzing the SEM images. The fiber laser for LAL was also used for the optical limiting measurement. The nanoparticle and hybrid material dispersions were placed in a glass cuvette with a light path of 1 mm for the optical limiting measurement. The incident and transmitted laser powers were measured.

The nanoparticle dispersions of different materials were fabricated by LAL as shown in Figure 1a. LAL is an explosive material removal process that can be used for the synthesis of nanoparticles. The interaction between ns laser pulses and a solid target in a liquid environment typically involves plasma formation, expansion and shock wave generation [16,17]. A high density of energetic species is generated in the plasma plume during the ablation process. The energetic species includes atoms, molecules, ions, clusters, and ultrafine particulates. The strong interaction among these energetic species and liquid molecules promotes nucleation and aggregation, leading to the formation of the nanoparticles [1].

Figure 1b shows a photograph of the laser-generated gold and silver nanoparticle dispersions fabricated by the LAL technique. Droplets of the nanoparticle colloidal solution were placed on a polished silicon substrate. These droplets were dried and the nanoparticles on the silicon substrate were characterized by SEM. The particle size and size distribution of the gold and silver nanoparticles are summarized in Figure 1c,d. This shows that the gold nanoparticle diameter distribution ranges from 5 to 30 nm with a maximum at 15 nm. The effect of clustering of the nanoparticles is observed upon drying of the colloidal solution. The silver nanoparticle diameters range from 20 to 500 nm with maximum at 80 nm. It can be seen that a few Ag nanoparticles have a relatively larger diameter in the range of a few hundred nanometers. Comparing these two types of nanoparticles, the Au nanoparticles have a smaller average particle size and better particle uniformity. Since the laser parameters used for the generation of the nanoparticles for both Au and Ag are the same, the difference in the size distribution of the generated nanoparticles is not only due to the laser parameters but also several other factors. One factor is the different thickness of the target sample, which leads to the slightly different DI water layer thickness above the target sample surface. The laser ablation rate can be enhanced by the confinement of the water [18]. For the Au target, the water layer thickness was ≈1 mm, while for the Ag target, the water layer thickness was ≈5 mm. For the Au target, the plasma generated during laser ablation is effectively confined by the 1 mm thick water film, leading to an increased plasma pressure and temperature. Thus, a large amount of energetic species are ejected during the laser ablation. The generated nanoparticles remain in the incident laser light path due to the limited mobility of the nanoparticles in water and the limited volume of the beaker. These nanoparticles can absorb the subsequent laser pulse energy. The size of the nanoparticles that absorb the incident laser light decreases because of the laser-induced fragmentation [19,20]. For the Ag target, having a much thicker water layer, the laser ablation rate is reduced because of the absorption of the laser energy by water. In addition, the laser-induced fragmentation is also reduced due to fewer ablated species and less absorbed laser energy. Hence, the size of the laser-generated Ag nanoparticles is larger. Au and Ag have different physical properties, such as the absorption spectrum of the laser light, melting point, boiling point and thermal conductivity, which all can contribute to the size difference.

The introduction of silica microspheres in a metallic nanoparticle dispersion concentrate the light energy into a smaller spot. Such a process causes strong light scattering or absorption, and thus lowers the optical limiting system’s energy threshold. The concentration of light by the transparent microspheres is not limited to a specific wavelength, but rather over a broadband spectral range, making this hybrid optical limiter more compatible for practical applications. Since the microspheres are transparent in the wavelength range of interest, there will be no visual loss to limit the functionalities. Our optical limiting results have shown that silica microspheres are a promising material to enhance the optical limiting effect. In addition, metallic nanoparticles exhibit localized surface plasmon resonance (LSPR), which is another possible way for local field enhancement to influence the light absorption and scattering [25].

© 2015 Du et al; licensee Beilstein-Institut.
This is an Open Access article under the terms of the Creative Commons Attribution License (http://creativecommons.org/licenses/by/2.0), which permits unrestricted use, distribution, and reproduction in any medium, provided the original work is properly cited.
The license is subject to the Beilstein Journal of Nanotechnology terms and conditions: (http://www.beilstein-journals.org/bjnano) 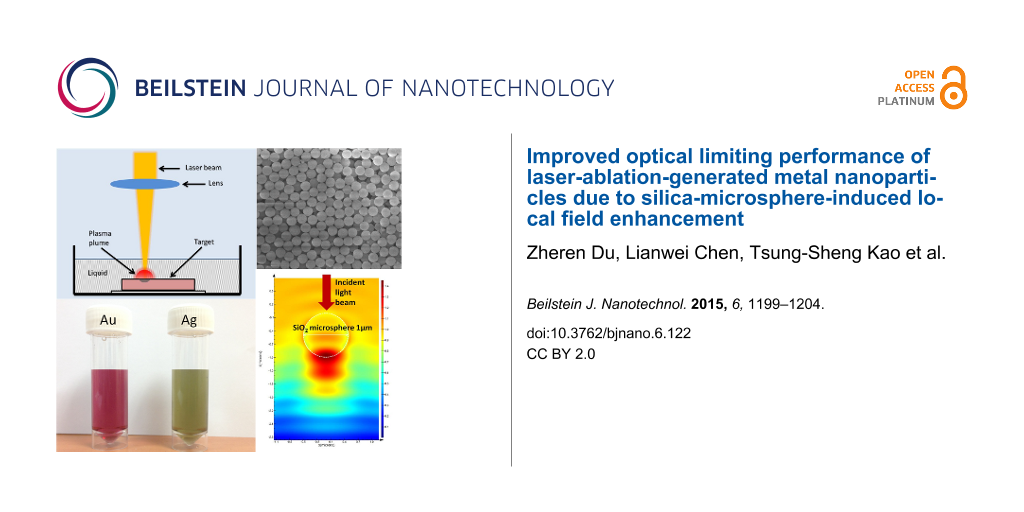