All articles from this author
Xiaoyu Li


All articles from this author
Ming Li

Ni/Cu composite nanowires were synthesized in an aqueous solution for the first time. The synthetic process consisted of two steps. Firstly, pure nickel nanowires were prepared through chemical reduction in solution under a magnetic field. Secondly, copper was reduced on the surface of the nickel nanowires, during which Ni/Cu composite nanowires with an average length of 80 µm and diameter of about 200 nm were synthesized. The products were characterized by XRD, SEM and TEM. The method has notable advantages: It is template-free, inexpensive, easy-to-operate, and it only needs a short reaction time, which makes it suitable for large-scale preparation.

In recent years, the catalytic hydrogenation of CO2 to light hydrocarbons has been recognized as one of the most effective and economical ways to fix and utilize a large amount of anthropogenic CO2 [1-3]. Nickel and copper, which are extensively applied in industry, are efficient hydrogenation catalysts both with regard to conversion and selectivity of CO2 hydrogenation [4-6]. Nanoparticles of metals possess the advantages of a small grain diameter and a high specific surface area [7-9]. However, the active region on the surface cannot be completely used because of aggregation of the particles [10-13]. In contrast, one-dimensional nanostructures especially nanowires of metallic materials have the advantage of a bigger active region and more interspaces owing to their unique morphology with a space grid structure [14-19]. To the best of our knowledge, no research about preparing composite nanowires of nickel and copper has been reported to date. It is, however, of great significance to develop a new one-dimensional material containing both nickel and copper.

In the experiments, all the reagents are analytical grade and are used as received. At first, nickel nanowires were prepared in solution under a magnetic field through a facile method [20]. In a typical process, 0.16 g NiSO4·6H2O (0.01 mol·L−1) and 0.18 g C6H5Na3O7·2H2O (0.01 mol·L−1) were dissolved in 60 mL deionized water. The pH value of the solution was adjusted to 12.5 and the temperature of the solution was kept at 80 °C. Hydrazine hydrate (N2H4·H2O) was added as reducing agent. The molar ratio of N2H4·H2O/NiSO4·6H2O was 2:1. Secondly, the prepared pure nickel nanowires were added into 60 mL of CuSO4 solution (the molar ratio of Cu/Ni was 1:2) at 80 °C. The resulting products were collected, rinsed three times with deionized water and ethanol respectively. Ultimately, the synthesized products were dried in vacuum for further testing and applications.

The morphology of the samples was observed by field emission scanning electron microscopy (FE-SEM, JSM-7500F, JEOL) operating at 10 kV accelerating voltage, and energy dispersive spectroscopy (EDS) analysis was performed with the spectrometer attached to the same SEM. The composition and crystallographic properties of the products were analyzed by X-ray diffraction (XRD, Philips, X’pert) in the range from 20 to 85° with a scanning rate of 0.02°/s. Transmission electron microscopy (TEM) images were obtained with a JEOL JEM-100CX TEM.

The SEM image of synthesized Ni nanowires before being used as a special template is shown in Figure 1a. Figure 1b shows the SEM image of the prepared Ni/Cu nanowires under optimal conditions that can be achieved at present. Uniform Ni/Cu composite nanowires with an average size of approximately 200 nm in diameter and 80 µm in length were obtained. Furthermore, no isolated spherical Ni or Cu particles are observed in Figure 1b. By contrasting Figure 1a and Figure 1b, no obvious difference in morphology can be found.

Figure 3 shows the TEM images of Ni nanowires (a) and Ni/Cu composite nanowires (b). It can be observed from Figure 3a that nickel particles are assembled into a solid linear structure under an external magnetic field, which correspond with our previous research [7,20]. It is obvious that the surface of the Ni/Cu composite nanowires is compact from the Figure 3b, which further confirmed that the copper grains are not simply attached to the surface of Ni nanowires.

Polycrystalline Ni/Cu composite nanowires of approximately 200 nm in diameter and 80 µm in length were synthesized for the first time through a new method combining the self-assembly of nickel particles under an external magnetic field and the reduction of Cu2+ on the surface of prepared nickel nanowires. It is found that an external magnetic field can make nickel particles self-assemble in one dimension, leading to the formation of polycrystalline nickel nanowires. Copper ions were then reduced to tiny particles on the surface of the prepared nickel nanowires. The present study provides a simple method to prepare uniform Ni/Cu composite nanowires in large scale with great potential for industrial applications, especially in the field of CO2 hydrogenation.

Financial support by the National Natural Science Foundation of China (Grant No. 50904046) is gratefully acknowledged.

© 2015 Wang et al; licensee Beilstein-Institut.
This is an Open Access article under the terms of the Creative Commons Attribution License (http://creativecommons.org/licenses/by/2.0), which permits unrestricted use, distribution, and reproduction in any medium, provided the original work is properly cited.
The license is subject to the Beilstein Journal of Nanotechnology terms and conditions: (http://www.beilstein-journals.org/bjnano) 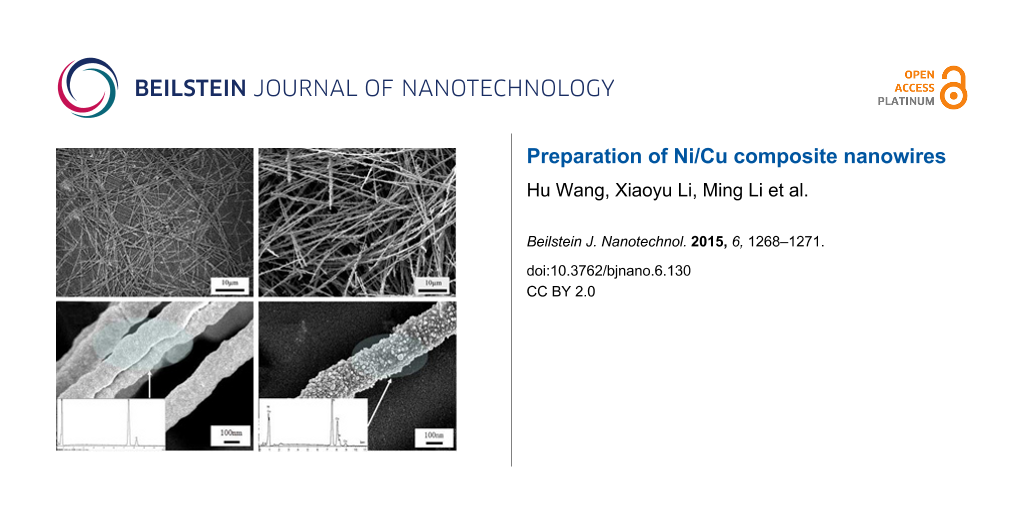