All articles from this author
Christian Lautenschläger


All articles from this author
Maria Wallert


All articles from this author
Stefan Lorkowski


All articles from this author
Andreas Stallmach


All articles from this author
Alexander Schiller

This article is part of the Thematic Series "Nanomaterial-based cancer theranostics".

We here describe a new approach to visualise nitric oxide (NO) in living macrophages by fluorescent NO-sensitive microspheres based on poly(lactic-co-glycolic acid) (PLGA). PLGA microspheres loaded with NO550 dye were prepared through a modified solvent-evaporation method. Microparticles were characterized by a mean hydrodynamic diameter of 3000 nm, zeta potential of −26.000 ± 0.351 mV and a PDI of 0.828 ± 0.298. Under abiotic conditions, NO release was triggered through UV radiation (254 nm) of 10 mM sodium nitroprusside dehydrate (SNP). After incubation, AZO550 microspheres exhibited an about 8-fold increased emission at 550 nm compared to NO550 particles. For biotic NO release, RAW 264.7 murine macrophages were activated with lipopolysaccharide (LPS) of Salmonella typhimurium. After treatment with NO550 microparticles, only activated cells caused a green particle fluorescence and could be detected by laser scanning microscopy. NO release was confirmed indirectly with Griess reaction. Our functional NO550 particles enable a simple and early evaluation of inflammatory and immunological processes. Furthermore, our results on particle-based NO sensing and previous studies in targeting intestinal inflammation via (PLGA)-based microspheres demonstrate that an advanced concept for visualizing intestinal inflammation is tangible.

Inflammation and malignancies are fundamental aspects of many human diseases. Nitric oxide (NO) has been proposed to be an important mediator of inflammation and carcinogenesis. Chronic inflammation, as found in inflammatory bowel diseases, seems to be maintained by high levels of nitric oxide (NO) due to an abnormal immune response against endogenous flora and luminal antigens in genetically susceptible individuals. High levels of NO become noxious to mucosal tissue. As NO levels even correlate with severity of disease, imaging of mucosal NO concentrations improves the assessment of disease activity and even may contribute to predict disease progression before mucosal damage continues. The visualisation of molecular processes that drive mucosal inflammation is of great interest in life sciences. NO is synthesised and released on demand, it is not stored and is highly diffusible. In vivo detection of NO in real time is difficult, because NO rapidly diffuses and reacts with cellular components. NO quantification with chemiluminescence or amperometry is often complicated by low spatio-temporal resolution and complex experimental set-ups prone to interferences [1]. Hence, the development of highly sensitive fluorescent sensors for NO imaging may improve its visualisation in vivo significantly [2]. Furthermore, molecular imaging of NO enables a better visualisation of intestinal functionalities, including irregular mucosal patterns and vascular lesions [3].

We developed a novel polymeric microparticle made of biodegradable poly(lactic-co-glycolic acid) (PLGA), which accumulates selectively in inflamed mucosa of patients with inflammatory bowel disease without interfering with the healthy mucosa. This approach is based on the epithelial barrier dysfunction of the intestine during intestinal inflammation. The intestinal barrier shows an increased permeability by disabled tight junction proteins, alterations in the thickness and composition of the mucus. Thus, particles penetrate and accumulate only into the inflamed mucosa [4]. Previously, we have shown that polymeric particles penetrate and accumulate selectively within the inflamed mucosa proving that a particle-based approach is feasible [5,6]. Now, we introduce a cutting-edge strategy to visualise NO in living macrophages as first step, and to visualise these cells in NO-mediated intestinal inflammation in vivo by fluorescent particle-based diagnostics in a second step.

Here, we used a NO-sensitive dye, namely NO550, as a model molecule to proof the concept of a particle-based diagnostic as part of an advanced diagnostic concept for detecting intestinal inflammation. NO550 is a chemical sensor for the cellular imaging of NO, while being inert to other reactive oxygen and nitrogen species (ROS/RNS), and is characterized by high specificity and low background signals [7]. We prepared and characterized NO550-loaded PLGA microspheres to study NO in abiotic and biotic experiments. To our knowledge, this is the first time of visualisation of NO at different concentrations via fluorescence-emitting NO550-PLGA microspheres.

In this study, we used sodium nitroprusside (SNP) as an exogenous NO donor. SNP in aqueous medium is highly photosensitive and releases NO in a constant manner when irradiated with UV light. This experimental approach allows for abiotic NO sensing studies. After 2 minutes of incubation of NO550-loaded microspheres with UV-irradiated SNP (10 mM, 2 min, 254 nm) we observed an up to 8-fold increased fluorescence signal at 550 nm compared to inactive NO550-loaded microspheres (see Section 3 of Supporting Information File 1 for further experimental data). Thus, NO550-loaded particles could sense abiotic NO by reacting with the encapsulated NO550. The conversion into the fluorescent AZO550 was detected photometrically (Figure 2).

In our studies, we used the murine RAW264.7 macrophage cell line as an established model to analyse the endogenous formation of NO. This experimental approach allows for biotic NO sensing studies with NO550-loaded microspheres. LPS from Salmonella typhimurium was used to induce NO production in these macrophages. The pathogen Salmonella typhimurium causes severe intestinal inflammations, in some cases even leading to bacteraemia. LPS increased cellular production and release of NO in RAW264.7 macrophages up to 50 µM after 24 h of stimulation compared to non-stimulated macrophages. The incubation (1 h) of LPS-treated RAW264.7 with microspheres resulted in a slight increase in NO formation in the range of about 1 µM, while native untreated cells displayed basal NO levels of approximately 0.6 µM. Microscopic investigation of untreated macrophages confirmed this by a low fluorescence signal of NO550-loaded microspheres (Figure 3). In contrast, NO550-loaded microspheres revealed in LPS-stimulated macrophages a strong fluorescence signal at 550 nm. Due to the polymeric encapsulation of NO550, no fluorescent background was observed. The microspheres showed a clear round shape with homogenous fluorescence. Some smaller microspheres were located within macrophages, likely because of endocytic uptake by the RAW264.7 macrophages (Figure 3). These results clearly show that NO550-loaded particles can be used to sense biotic NO by the reaction of NO with the encapsulated NO550. The conversion of NO550 into the fluorescent AZO550 molecule can be detected chemically and spectrometrically. Furthermore, the fluorescence intensity of the microspheres in the supernatants of the cells can be measured using a plate reader. In the same supernatants, we determined NO release using the Griess reaction (see Section 4 and Section 5 of Supporting Information File 1 for experimental data). These experiments showed that the fluorescence intensity of the supernatants coincided with the amount of nitrite in the supernatant of LPS-stimulated cells as determined by the Griess reaction (Figure 4).

We demonstrated the possibility of molecular imaging of NO at different concentrations and under different conditions using NO550-loaded PLGA microspheres in living macrophages. NO550 is converted by NO into an azo dye, which emits green fluorescence in an NO concentration-dependent manner. Thus, this approach provides a novel approach for the early spatio-temporal evaluation of inflammatory processes in IBD. The intestinal distribution and signal intensity of the microspheres can be easily analysed by fluorescence-based microscopy. A next step will be to adopt our approach for the use with fluorescence-based endoscopy and for the visualisation of NO release in mucosal biopsies obtained from patients with chronic intestinal inflammation. Furthermore, our results on particle-based NO-sensing and previous works in targeting intestinal inflammation via PLGA microspheres demonstrate that an advanced concept for visualizing intestinal inflammation is tangible.

Use of nanosystems to improve the anticancer effects of curcumin

© 2017 Lange et al.; licensee Beilstein-Institut.
This is an Open Access article under the terms of the Creative Commons Attribution License (http://creativecommons.org/licenses/by/4.0), which permits unrestricted use, distribution, and reproduction in any medium, provided the original work is properly cited.
The license is subject to the Beilstein Journal of Nanotechnology terms and conditions: (http://www.beilstein-journals.org/bjnano) 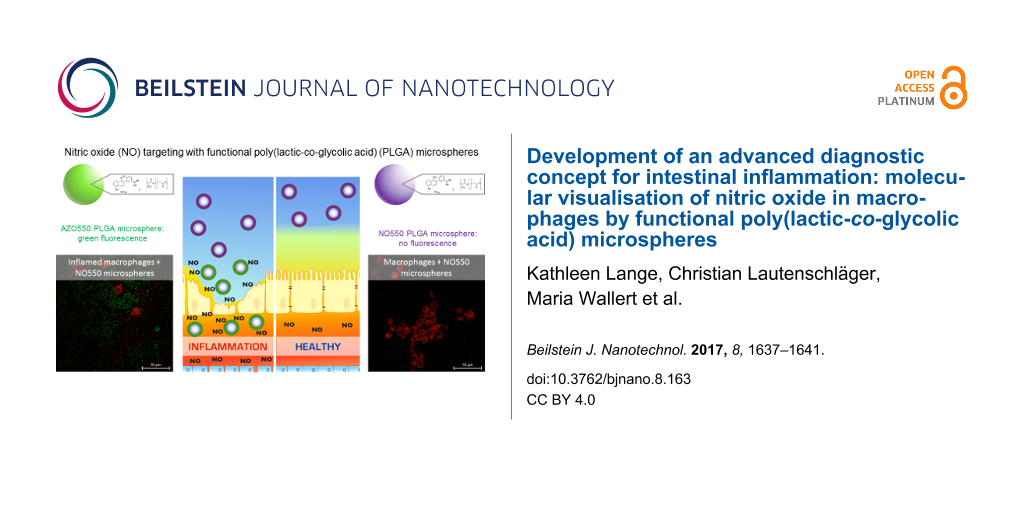