All articles from this author
Xiaoyu Li


All articles from this author
Zhiqiang Xu

In the present paper, bimetallic Co–Cu nanowires with a highly desirable linear structure were successfully synthesized via a rapid and facile template-free method [9-11] assisted by magnetic fields. Moreover, they were applied to catalyze the hydrolysis of ammonia borane (NH3–BH3, AB) for the first time. This result lays the foundation for expanding their application to industrial catalysis.

All chemicals were of analytical reagent grade and used without any further purification. CoCl2·6H2O, EDTA-2Na, CuSO4·5H2O, PVP, NaOH, N2H4·H2O, H2PtCl6·6H2O and C2H5OH were purchased from Chengdu Kelong Reagent Co., Ltd (China). H3NBH3 was supplied from Aladdin (Shanghai, China). Deionized water was used in all aqueous solutions.

The following reactions took place between two parallel neodymium magnets (60 × 30 × 10 mm3) separated 150 mm apart. The magnetic intensity inside the reaction solution was approximately 40 mT as measured by a magnetometer. The detailed synthetic process for the Co–Cu nanowires was as follows. First, 0.14 g of CoCl2·6H2O and 0.22 g of EDTA-2Na were dispersed in 60 mL of deionized water in a 100 mL polytetrafluoroethylene (PTFE) beaker. Then 0.18 g of PVP was added to the reaction solution. The pH value of the solution was adjusted to 14 by adding 2 g of NaOH, and the temperature of solution was kept at 80 °C. Afterwards, 0.1 mL of 80 wt % N2H4·H2O and 0.12 mL of 0.0253 mol·L−1 H2PtCl6·6H2O were added to the solution with gentle stirring. Ultimately, the reaction was over after about 5 min, and the product of Co nanowires was collected and rinsed three times with deionized water and ethanol, respectively. Next, 0.3 mL of 80 wt % N2H4·H2O were added to the cobalt nanowires with 60 mL of deionized water in a glass beaker, and heated in a water bath at a stationary temperature of 80 °C. Additionally, 0.015 g of CuSO4·5H2O (the starting molar ratio was Co/Cu 10:1) was dissolved in the glass beaker with continued stirring. Finally, after about 5 min, the product was separated from the reaction mixture by neodymium magnets. Similarly, the product of bimetallic Co–Cu nanowires was rinsed three times by deionized water and ethanol.

For the catalytic hydrolysis of AB, 10 mL of deionized water and 0.005 g of Co–Cu nanowires were added to a Florence flask and heated at 50 °C in a water bath. Furthermore, 0.023 g of AB was dissolved in the Florence flask with ultrasonic stirring. Ultimately, the volume of hydrogen was monitored by a eudiometer.

In order to further analyze the composition of the freshly prepared sample, EDS spectra and elemental mapping profiles of as-prepared bimetallic Co–Cu nanowires were taken as exhibited in Figure 4. Figure 4a shows the measurement selected area of the bimetallic Co–Cu nanowires, and Figure 4b shows the detailed elemental spectrum corresponding to the selected area. Figure 4b shows that the as-prepared product contained elemental cobalt as well as elemental copper, which is in accordance with the XRD patterns. Additionally, silicon, carbon and platinum peaks were from the calculation of the elementary composition because they originated from the silicon wafer substrate, PVP and H2PtCl6·6H2O, respectively. Moreover, the elemental mapping profiles (Figure 4c,d) of Co and Cu further proved the presence of Co and Cu as well as their uniform distribution patterns.

Table 1 compares the catalytic activity in terms of TOF values of different catalysts used for the hydrolysis of AB. It is clear that Co–Cu nanowires possess enhanced performance as compared to the other catalysts listed in Table 1, and they were much less expensive than these precious metal material based catalysts. Therefore, Co–Cu nanowires show a great promise in the prospect of catalytic systems.

In summary, magnetic bimetallic Co–Cu nanowires were successfully synthesized by a rapid, inexpensive, template-free method under an external magnetic field for the first time. The SEM and TEM results showed that the as-prepared product possessed a highly desirable, linear structure, and the average diameter was about 150 nm. Moreover, the magnetic hysteresis loop indicated that bimetallic Co–Cu nanowires were paramagnetic materials, which meant they could be separated easily from the reaction mixture. Furthermore, the product was successfully applied to the hydrolysis of AB as a catalyst for the first time, and the activity in terms of TOF was calculated to be 6.17 (mol H2·min−1·(mol Co–Cu)−1). Therefore, a rapid and facile synthesis method was developed to prepare bimetallic Co–Cu nanowires with great potential for industrial applications.

This work was funded by the National Natural Science Foundation of China (No. 50904046).

© 2017 Sun et al.; licensee Beilstein-Institut.
This is an Open Access article under the terms of the Creative Commons Attribution License (http://creativecommons.org/licenses/by/4.0), which permits unrestricted use, distribution, and reproduction in any medium, provided the original work is properly cited.
The license is subject to the Beilstein Journal of Nanotechnology terms and conditions: (http://www.beilstein-journals.org/bjnano) 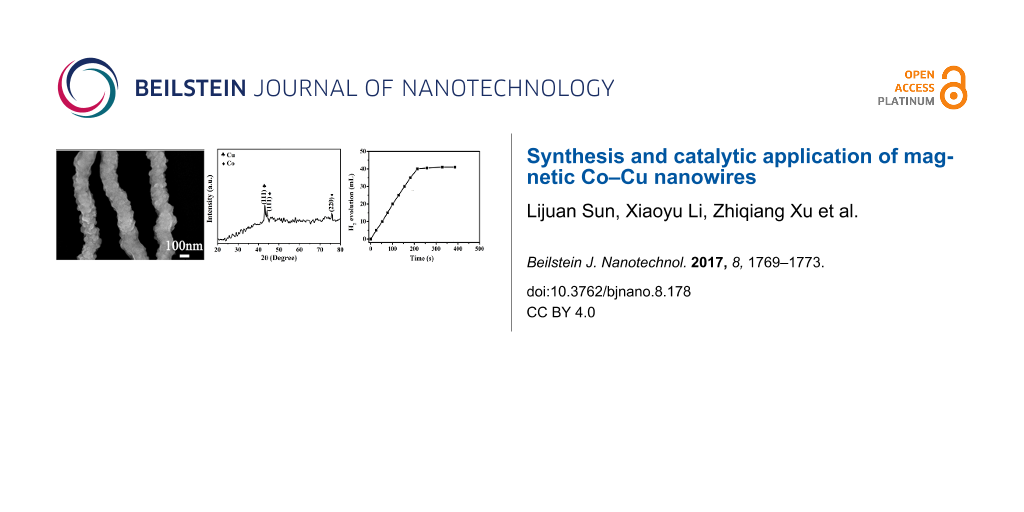