All articles from this author
Antonio Serra


All articles from this author
Gabriele Giancane


All articles from this author
Daniela Manno

Important sources of ammonia include synthetic fertilizers, oceans, the burning of biomass, the decomposition of plants, natural land [1] and the chemical industry [2]. Ammonia is also an organic compound normally produced by human metabolism [3] through the urea cycle [4]. Hyperammonemia (high blood levels of ammonia) is associated with kidney or liver dysfunction [5], but also with stress conditions, such as sport performances, where levels of ammonia in the blood can increase and exceed the concentration of ammonia in the air [6]. This is related to the re-metabolization of creatinine and urea into ammonia, which results in an abnormal increase of ammonia levels in the blood [7]. It is evident that early diagnosis is crucial, not only to improve prognosis, but also, to prevent the development of more serious illnesses.

The monitoring of volatile molecules in a fluid can be efficiently solved by developing methods for the detection of chemical species in the fluid itself. This approach has several advantages, including minimal fluid management and therefore greater reliability of the result.

There are many analytical methods to detect ammonia. Electrochemical analysis [8], gas chromatography [9], immunoassays [10], thin-layer chromatography [11], high-performance liquid chromatography (HPLC) [12] are the main methods used so far for a reliable determination of NH3 levels. However, the above-mentioned techniques have difficulties and disadvantages, such as the need for electrodes, the development of surface potentials and the volatility of ammonia. Some of the methods are relatively slow and/or require expensive equipment. Therefore, it is an urgent need to develop a rapid, accurate, simple and inexpensive method to detect NH3.

Nesakumar et al. have recently synthesized silver nanoparticles (AgNPs) using Terminalia chebula extract [27] and have obtained an optical sensor to detect dissolved ammonia in water. The above mentioned work concludes with the interesting result that SPR intensity and ammonia concentration are linearly related in the investigated range from 0 (control) to 100 ppm.

In this paper we have analysed the role of ammonia in the synthesis of silver nanoparticles, a controversial topic that has not been clarified completely in the works published so far. As the results show a dependence of the plasmon resonance on the concentration of NH3, we propose the development of a NH3 “fluid” optical sensor. It is worth to stress that the analysed system, ammonia in a colloidal silver solution is very simple compared to physiological systems of ammonia in organic fluids (blood or urine). However, this study is preliminary to address the problem of interfering species, e.g., proteins, enzymes and mineral salts. We highlighted that colloidal AgNPs solutions synthesized using both glucose and sucralose as reducing and capping agents, change their colour from pale yellow to orange and exhibit increased SPR when the NH3 concentration increases. The accurate morphological and structural analysis of colloidal solutions obtained explains the interaction of silver particles with ammonia.

To analyse the role of ammonia on the optical properties of colloidal solutions of silver nanoparticles, we show in Figure 1 the UV–vis absorption spectra obtained from the most representative samples.

The peak at about 400 nm is due to SPR of the electrons in the conduction band of silver and indicates the formation of silver colloids with nanometre-sized dimensions.

Figure 3 shows the TEM images recorded on different samples with ammonia concentrations ranging from 0 to 2000 ppm.

In order to obtain statistical information and determine the nanoparticles size, TEM images, which were obtained from 50 randomly chosen areas, were processed with "Digital Micrograph" a Gatan software and the data were reported in histograms (Figure 4). In such a way, more than 200 particles were analysed for each sample and the obtained results are statistically meaningful. From the analysis of the results in Figure 4 we can see that at low ammonia concentrations (from 0 to 1 ppm) the average diameter of nanoparticles increases with concentration and its distribution evolves towards a theoretical Gaussian distribution. From 1 to 100 ppm the average size of nanoparticles does not change, but the number of nanoparticles is significantly increased. A further increase in ammonia concentration does not lead bigger numbers of nanoparticles.

Table 1 shows the mean values of the diameters <d> and the relative standard deviations σ, together with the coverage index defined as R = Sp/Si, where Sp represents the fraction area covered by nanoparticles and Si the surface of the image. The absolute value of R obtained from a single TEM image is meaningless. However, the average of all the images processed for each sample, and, above all, the value of R as a function of the ammonia concentration provide important information. In fact, the table shows that ammonia has little influence on the size of nanoparticles, but has a significant influence on their quantity.

Figure 5a–e shows five representative SAED patterns that summarise the evolution of typical features of silver nanoparticles coming from colloidal solutions obtained without ammonia and with 1, 10, 100 and 1000 ppm NH3.

Several sets of experiments were carried out to determine the role of ammonia in the process of silver reduction. In particular, the results were interpreted by a first-order kinetic model [30,31]. As expected, the final result depends on NH3 concentration and on reaction time. Figure 6 shows the time evolution of UV–vis absorption spectra of two different colloidal solutions containing 200 ppm and 5 ppm ammonia (Figure 6a and Figure 6b, respectively). Figure 6c shows the SPR intensity (Abs) as a function of the reaction time for the two colloidal solutions considered.

The obtained results agree very well with the kinetic model. The absorbance (abs) of the plasmon resonance band is related to the volume fraction of the nanoparticles in the colloidal solution as a function of the reaction time (t):

where abs∞ represents the absorbance saturation value, and the constants k and n are, respectively, the apparent rate constant and the Avrami exponent. Zhou et al. [32] write n as

It can be shown that

Figure 6d report the experimental values as suggest by Equation 3: Y(t) as a function of log(t). In this way, the constants k and n can be obtained from the line intercept with the y-axis and the slope of the straight line (Table 2).

The maximum absorbance value versus NH3 concentration, can be described by the following equation in which H and p are constants:

From the previous equation one can obtain:

The different regimes in Figure 7 can be explained by the same function (Equation 5) with different values of H and p. According to Equation 5 the experimental points are arranged along a straight line also in the log–log plot of Figure 7a and Figure 7c. The fitting allows us to determine the values of H and p reported in Table 3.

The addition of small amounts of ammonia (up to 0.5 ppm) catalyse the formation of nanoparticles less rapidly and with less efficiency to what happens in the range of 20–350 ppm. Much more interesting appears to be the physiological range, where the ratio Δabs/abs0 is a linear function of the NH3 concentration (Figure 7b).

The effects of ammonia from 10−2 to 102 ppm are measurable. Above 500 ppm, there is a saturation effect and the use of this effect to measure of ammonia in a fluid becomes unreliable. The correlation between the change in absorbance and the concentration of ammonia make the system a good candidate for the realization of ammonia sensors in the range of 0.01–350 ppm. The ammonia, added to the colloidal solutions, has the capability to control and stabilize the nanoparticles. In addition, as also observed by Nesakumar et al. the formation of the diamine silver complex increases the SPR absorbance of AgNPs in solutions containing ammonia, which increases the rate of nucleation [28]. Compared to literature results, we explore a wide range of NH3 concentration. See, for example, the limited explored concentration range (from 10 to 50 ppm NH3) in the paper of El-Sherbiny et al. [36] or until 160 ppm of Gupta and co-workers [37]. In addition, our system is able to detect low ammonia concentrations from 0.01 to 0.5 ppm.

A simple model for the interpretation of experimental results is proposed, but in many works, such as Gupta and Verma [37], only the effect of ammonia is shown. However the functional dependence of absorbance as a function of the concentration is not discussed. Others report on much higher concentrations of ammonia, such as for example the work of Detsri and Popanyasak [38], which discussed the effect of HN3 in a concentration varying between 10 and 800 mM, corresponding to the range from 1.8·102 to 1.4·104 ppm.

The synthesis of the colloidal AgNP seed solution represents the first step in the detection of ammonia. The seeds of AgNPs have been prepared using an environmentally friendly hydrothermal method that uses sucralose as a stabilizer and glucose as a reducing agent. Briefly, 2 g of α-D-glucose and 2 g of sucralose were dissolved in 100 mL of ultrapure water. The solution is heated to 90 °C, then 2.5 mL of an aqueous AgNO3 solution (c = 10−2 M) is added and the solution is maintained at this temperature for 5 min until it becomes pale yellow, which is indicative for the formation of AgNPs seeds. The colloidal solution with newly formed seeds is not stable. It is necessary to reduce the temperature to 50 °C abruptly to block the formation of silver nanoparticles. The obtained colloidal solution was given into 25 mL vials. Finally, ammonia was added to each vial in known concentrations ranging from 0 to 2000 ppm. The vials containing ammonia were heated and maintained at 90 °C for 35 min. In all experiments, ammonia was added to colloidal solutions within 60 min after seed formation. The final colloidal solution is very stable:The optical absorption curves can be reproduced without any significant differences for at least five days.

Colloidal silver nanoparticles were monitored at different reaction times (from 0 until saturation) and at different concentrations of ammonia. Aqueous solutions containing AgNO3 and increasing ammonia concentrations were used as references. A Varian Cary 5 spectrophotometer with a quartz cuvette of 10 mm path length was used to acquire absorption spectra of all colloidal silver nanoparticle solutions in the range of 300–800 nm spectral range. All measurements were performed at room temperature. All obtained silver nanoparticle solutions were prepared for TEM observations by casting single drops onto standard carbon supported 600-mesh copper grids and drying slowly in air. A transmission electron microscope Hitachi 7700, operating at 100 kV, was used to record TEM images. SAED figures have all been obtained by selecting areas with 5 μm diameter on the sample. The acquisition time was suitable to avoid saturation of the more intense reflections. Statistical information on TEM images was obtained by processing the images using "Digital Micrograph", a Gatan software. The diffraction patterns were processed by PASAD-tools [39] from Digital Micrograph.

Hydrophilic silver nanoparticles with tunable optical properties: application for the detection of heavy metals in water

© 2018 Buccolieri et al.; licensee Beilstein-Institut.
This is an Open Access article under the terms of the Creative Commons Attribution License (http://creativecommons.org/licenses/by/4.0), which permits unrestricted use, distribution, and reproduction in any medium, provided the original work is properly cited.
The license is subject to the Beilstein Journal of Nanotechnology terms and conditions: (https://www.beilstein-journals.org/bjnano) 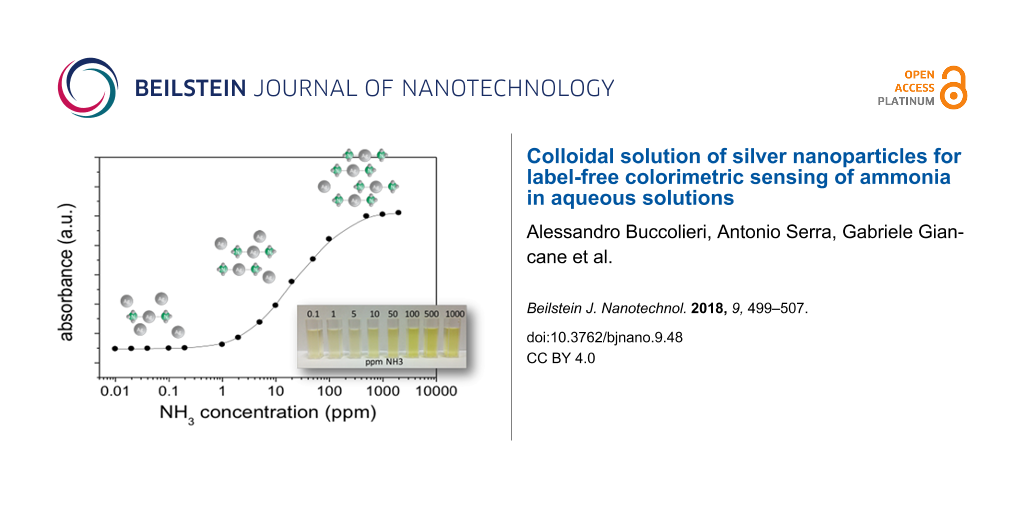