All articles from this author
Karel Pomeisl


All articles from this author
Stanislav Kafka


All articles from this author
Antonín Klásek


All articles from this author
Vladislav Kubelka

Substituted 3-(fluoroacyloxy)quinoline-2,4(1H,3H)-diones including 3-(fluoroiodoacetoxy) derivatives react with triethyl phosphite to afford either the product of the Perkow reaction or the corresponding 4-ethoxyquinolin-2(1H)-one. In both reactions, the fluorocarboxylate anion acts as the first observed leaving group. This observation restricts the application of the intramolecular Horner-Wadsworth-Emmons synthesis to modify quinoline-2,4(1H,3H)-diones by the annulation of fluorinated but-2-enolide rings.

The 3-alkyl-3-hydroxyquinoline-2,4(1H,3H)-dione metabolites of Pseudomonas species exhibit antibiotic or lipoxygenase inhibitor activity[1] that may be modified by the introduction of an annulated pharmacophoric but-2-enolide ring. [2] The annulation was successfully carried out[3] (product 2) via the intramolecular Wittig synthesis using a bromoacetyl derivative of the starting 3-hydroxyquinolinediones (1, Scheme 1).

Unlike haloalkanes and halocycloalkanes that undergo nucleophilic substitution reaction with trialkyl phosphites to afford the corresponding phosphonates according to the Michaelis-Arbuzov reaction,[4] the α-halocarbonyl compounds react with triethylphosphite to form enol phosphites 3 as a product of the Perkow reaction (Scheme 2). [5] The reaction is otherwise known to take place in halogenated ketones, diketones, aldehydes and also in some halogenoesters, amides or acyl halides. [5,6]

Examples of the successful Perkow reaction also include chlorofluoro ketones, e.g. 1,3-dichloro-1,1,3,3-tetrafluoroacetone,[7] α-halonitroalkanes, and in rare cases also polycyclic compounds[8] such as 3,3-dichloro-1-methylquinoline-2,4(1H,3H)-dione. [9] In the Perkow reaction of halocompounds, the observed leaving groups were the halogen anions. However, in the reaction of pentaacetylated D-fructose with trimethyl phosphite the acetyloxy anion as the leaving group was also observed. [10] This rather unusual transformation may be attributed to the structural nature of the sugar skeleton and its multiple acetoxy groups.

The annulation resulting in the formation of the targeted product 10 was successfully carried out[3] by the intramolecular Wittig synthesis using the bromoacetyl derivative of the starting 3-hydroxyquinolinediones (Scheme 3, R3 = CH2Br, Y = H). In order to investigate the potential changes in biological activity[11-13] of 10, we decided to introduce the fluorine substituent to the α-position of the butenolide ring (Scheme 3, 10, Y = F) utilizing the fluorinated building-block approach for the annulation of the fluorobutenolide cycle. An analogous Horner-Wadsworth-Emmons synthesis using ethyl (diethoxyphosphoryl)-fluoroacetate prepared from ethyl fluoroiodoacetate has been reported for the preparation of the α-fluoro-α,β-unsaturated acyclic esters and lactones. [14] However, when 1-benzyl-3-butyl-3-(fluoroiodoacetoxy)quinoline-2,4(1H,3H)-dione (4) was reacted with triethyl phosphite an unexpected product 9 (Scheme 3) was obtained instead of the desired Horner-Wadsworth-Emmons intermediate 1-benzyl-3-butyl-3-(diethoxyphosphoryl)fluoroacetyloxy-quinoline-2,4(1H,3H)-dione. We assume the newly observed reaction to be due to the increased electron-withdrawing character of the acyl moiety.

According to Scheme 2, the reaction of 3-(halogenoacyloxy)quinoline-2,4(1H,3H)-diones 4-6 with triethyl phosphite gave two kinds of products: the product of the Perkow reaction (8) and 1-alkyl-4-ethoxy-quinolin-2(1H)-one (9), respectively (Table 1, entries 3 and 5). In both the reactions, the halocarboxylate anion was eliminated. The role of halocarboxylates as leaving groups in the Perkow reaction is previously undescribed feature. Surprisingly, in contrast to the previously described Perkow reaction utilizing fructose pentaacetate,[10] the 3-acetoxyquinoline-2,4(1H,3H)-diones 7a and 7b did not react (Table 1, entries 6 and 7).

In both of the reactions shown in Scheme 3 the elimination of the acyloxy moiety results in an energetically favored extension in conjugation of the π-system of the heterocyclic ring. In the reaction of the fluoroiodoacetyl derivative 4, triethyl phosphite does not attack the C-I bond to form the corresponding product of Michaelis-Arbuzov reaction as is usual for the alkyl fluoroiodoacetates. [14] Instead, the phosphorus atom of triethyl phosphite attacks either the carbonyl group of the R3-CO acyl function, or the carbonyl located at C-4 on the heterocyclic ring (Scheme 4). Fluorinated acyloxy derivatives 5 and 6 reacted in a similar fashion at the carbonyl carbon atom of the acyl group or at C-4 of the heterocyclic ring (Table 1). As the acetoxy derivatives 7a or 7b did not react at all (Table 1, entries 6 and 7) it can be inferred that the new reactions (Scheme 2) require the presence of a stronger electron-withdrawing acyl group. Halogenated acyloxy groups possess a more reactive carbonyl group and as such are better leaving groups. Perhaps the increase in reactivity of the C4-carbonyl group is also due to halogenated acyloxy group. In any case, in the compounds 4–6 the two carbonyl groups are preferential reaction sites for the attack by the phosphorus atom of triethyl phoshite (Scheme 4).

The factors directing the phosphite attack to form the enol phosphite 8, the usual product of the Perkow reaction, or the unusual Perkow product 9 may be formulated as follows: As the Perkow reaction leading to the Perkow product 8 was observed for the compounds that all possess a butyl substituent at C-3 (4, 5a and 6a), a steric shielding effect is likely preventing the relatively bulky triethyl phosphite from attacking the acyloxy moiety. The nucleophilic attack then occurs at the ring C-4 carbonyl group. For this kind of Perkow reaction (Scheme 5), a hypothetical intermediate 11 and mechanism featuring acyloxy leaving group may be drawn. The proposed mechanisms in intermediates 11 and 12 featuring the acyloxy-leaving group corresponds to the proposed mechanisms[5,9,15,16] of the Perkow reaction (Scheme 5). The product 9 is most likely the result of an attack of the acyl-carbonyl moiety in the 3-acyloxyquinolinedione derivatives 5b and 6b. Both compounds possess a rigid phenyl substituent at C-3. In the case of 5b and 6b, the triethyl phosphite nucleophile attacks the more reactive carbonyl carbon in the ester group, because this reaction site is less shielded than in 4, 5a and 6a. [17]

A hypothetical intermediate 12 and the proposed mechanism for formation of product 9 is depicted in Scheme 5. An analogous mechanism featuring fluoride anion as a leaving group was proposed previously for the reaction of perfluorinated aliphatic ketones with trialkyl phosphites. [7] The products 8 and 9 were obtained in isolated yields of 18–68% and 11–38% (Table 1), owing in part to the difficulties with their separation. In fact, the reactions reached an almost complete conversions of the starting acyloxy compounds 4–6 after 2–26 hours, and the isolated products 8 or 9 were the major or exclusive compounds in the reaction mixtures according to TLC analyses.

The reactions reported in this communication show that the application of the Horner-Wadworth-Emmons strategy for the annulation of the α-fluorobut-2-enolide ring to hetero(poly)cyclic systems using (diethoxyphosphoryl)fluoroacetyl intermediate may be difficult due to the competing reaction of trialkyl phosphite at highly reactive carbonyl group(s).

© 2005 Paleta et al; licensee Beilstein-Institut.
This is an Open Access article under the terms of the Creative Commons Attribution License (http://creativecommons.org/licenses/by/2.0), which permits unrestricted use, distribution, and reproduction in any medium, provided the original work is properly cited.
The license is subject to the Beilstein Journal of Organic Chemistry terms and conditions: (http://www.beilstein-journals.org/bjoc) 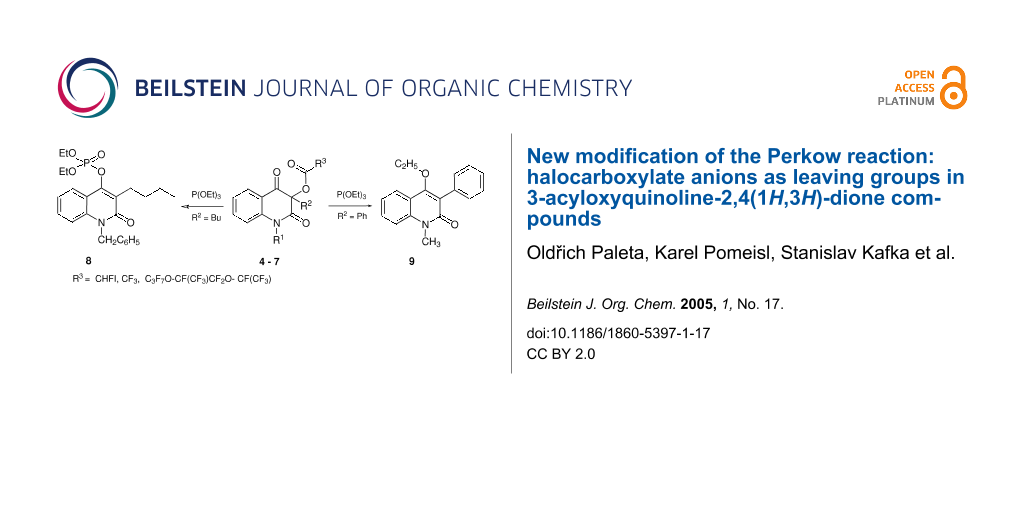