All articles from this author
Massimo Curini


All articles from this author
Ornelio Rosati


All articles from this author
Lucio Minuti

Dedicated to the memory of Professor Marcello Tiecco.

A new, efficient and mild method for the direct oxidation of selenides to selenones using magnesium bis(monoperoxyphthalate) hexahydrate (MMPP) has been developed. Noteworthy this transformation proceeds at room temperature, employs a cheap and safety oxidant and has a broad functional group tolerance. Moreover, the produced selenones could be useful intermediates for the synthesis of different heterocyclic compounds.

Organoselenium compounds have received considerable attention in recent times because they are versatile reagents or intermediates in organic synthesis [1]. Particularly, alkyl phenyl selenones [2,3] represent a valuable compound class due to the ability of the phenylselenonyl group to behave as a good leaving group in substitution reactions (Scheme 1). Thus, the development of efficient and mild methods for their synthesis is of considerable interest.

A few previous papers report the synthesis of selenones 2 by oxidation of the corresponding selenides 1 with potassium permanganate [4], trifluoroacetic acid [4] and hydrogen peroxide in trifluoroethanol with stoichiometric amounts of phenylseleninic acid [5]. These methods suffer of several disadvantages such as harsh reaction conditions and limited structural features of the substrates; thus, potassium hydrogen persulfate [6] (Oxone) and m-chloroperoxybenzoic acid [4,7] (MCPBA) have been employed for the oxidation of different alkyl phenyl selenides to the corresponding selenones. Since the phenylselenonyl group is an excellent leaving group, selenone 2 readily undergoes SN2 type substitution reactions with common nucleophiles [7,8] as shown in Scheme 2. A wide range of heterocyclic compounds can be obtained by intramolecular nucleophilic substitution reactions e.g. epoxides from β-hydroxy phenyl selenides [9,10], N-benzoyl- and N-tosyl-1,3-oxazolidin-2-ones from β-hydroxyalkyl phenyl selenides [11], N-arenesulfonylazetidines from γ-(phenylseleno)alkyl arylsulfonamides [12], N-acylaziridines [13], 1,3-oxazolines, dihydrooxazine and pyrrolidines from acylamino phenyl selenides [14]. Interestingly, the intramolecular substitution reaction of a phenylselenonyl group was used on enantioenriched γ-hydroxyalkyl phenyl selenides to obtain optically active 2-substituted tetrahydrofurans [15] (see Scheme 2).

In this article, we investigated the use of magnesium bis(monoperoxyphthalate) hexahydrate (MMPP) as a new oxidant for the straightforward conversion of selenides 1 to selenones 2 under mild experimental conditions. Magnesium bis(monoperoxyphthalate) hexahydrate is a cheap commercially available, relatively stable and easy to use oxidant and it has been employed for the selective oxidation of sulfides to the corresponding sulfoxides, for the preparation of α-methylenecyclohexane [16] and glycosyl sulfoxides [17]. Compared to the widely used peroxy acid MCPBA, MMPP has similar chemical properties, but it is a halogen-free reagent and it is considered safer to use in both small- and large-scale reactions [18]. The only disadvantage of MMPP is its poor solubility in non-polar solvents such as dichloromethane. To the best of our knowledge the use of MMPP for the over oxidation of the selenium atom to the corresponding selenone was not reported before.

Firstly, a solution of selenide 1a in ethanol was treated with 2.4 equiv of MMPP at room temperature to obtain the corresponding selenone 2a in 94% yield (Table 1, entry 1). The known oxidation of selenide 1a with MCPBA in dichloromethane [4] gave the corresponding selenone in 68% yield. It is noteworthy that the reaction byproduct magnesium phthalate is water soluble and easy to separate during work-up; acidification of the water phase and extraction with dichloromethane allows to recover the pure phthalic acid in excellent yield.

This protocol was then extended to the oxidation of selenides 1b–d. The reactions were monitored by simple TLC and good to excellent yields of the selenones 2b–d were obtained after simple work-up without additional purification. Structures of compounds 2a,b and 2d were assigned by their IR and NMR spectra. The NMR and IR spectra data were in agreement with those of similar compounds reported in the literature [6]. Despite the low solubility of MMPP in tetrahydrofuran, the oxidation of selenides 1b and 1c in tetrahydrofuran and in the presence of dipotassium hydrogen phosphate as base, proceeded smoothly and let us to obtain selenones 2b and 2c in good yields (Table 1, entry 2 and 3). Selenone 2c was previously obtained in 60% yield by reaction of 1c with MCPBA in dichloromethane [19]. Interestingly, selenone 2b was obtained for the first time by our oxidation procedure performed in tetrahydrofuran as solvent and fully characterized by classical spectroscopic analysis and high resolution mass spectrometry. However, it is important to note that the oxidation of selenide 1b with MCPBA in methanol did not give selenone 2b but the corresponding methyl cyclopentyl ketone deriving from ring contraction [20]. On the other hand the oxidation of 1b with Oxone in methanol and water gave the β-methoxy alcohol through transformation of the C–Se bond into a C–O bond even in the presence of a weak nucleophile like the hydroxy ion [6]. The oxidation of γ-(phenylseleno)alkyl tosylamide 1d with MMPP (2.4 equiv) in ethanol afforded the corresponding selenone 2d in 63% yield. Instead, when the same reaction was carried out in tetrahydrofuran, the undesirable olefine derived from the β-elimination of selenoxide intermediate was formed as the main product. Otherwise, when the same reaction was conducted in the presence of powdered potassium hydroxide, selenone intermediate 2d containing the nucleophilic tosylamide group, readly underwent selective cyclization to give unsubstituted N-tosylazetidine (3d) in 55% yield (Table 2, entry 1), lower than the yield obtained with MCPBA (100%, [14]). An experiment to replicate the result of Toshimitsu [14] employing MCPBA and potassium hydroxide in ethanol, produced compound 3d with a comparable yield of 54%. When our procedure was extended to selenides 1e–j containing a nucleophilic nitrogen or oxygen atom, the MMPP oxidation of these selenides, gave the corresponding selenone intermediates which readily undergo intramolecular SN2 type substitution reactions to afford a range of heterocyclic compounds (Table 2, entries 2–7) and benzeneseleninic acid. Thus, the oxidation of β-hydroxyalkyl phenyl selenide 1e gave, in tetrahydrofuran and in the presence of dipotassium hydrogen phosphate, the corresponding oxirane 3e in 77% yield, resembling the previously reported one by oxidation with MCPBA (73% [9]). The MMPP oxidation of β-benzoylamino phenyl selenide 1f in methanol afforded exclusively the 1,3-oxazine 3f in excellent yield (84%).

This result is in accordance with data reported by Toshimitsu [14] for a structural similar compound oxidized with MCPBA. In this case the authors stated that the cyclization by the oxygen atom was very fast and no β-methoxyamide derivative was detected when methanol was employed as the reaction solvent. Similarly the dihydrooxazine 3g [14] was easily obtained in good yield by the oxidative cyclization of the acylamino phenyl selenide 1g with MMPP in methanol (Table 2, entry 4) although in lower yield than reported before (90% [14]). As reported in Table 2 (entries 5 and 6), the N-tosyl-1,3-oxazolidin-2-one [11] 3h and the N-benzoyl-1,3-oxazolidin-2-one [11] 3i were easily obtained by MMPP oxidation of the corresponding β-carbamoyloxyalkyl phenyl selenides 1h and 1i in tetrahydrofuran. The N-substituted-1,3-oxazolidin-2-ones 3h and 3i were obtained in 94% and 82% yields respectively as a result of the intramolecular displacement of the phenylselenonyl group by the nitrogen atom of the carbamic group. These results are in accordance with precedent oxidation–cyclization reactions performed with MCPBA (96% and 88% respectively) [11]. The presence of the phenylselenone intermediate in the above reactions was already and unambiguously demonstrated [11]. On the other hand, the oxidation of 1d with MMPP in ethanol allowed to isolate and to fully characterize (high resolution mass spectra and NMR analysis) the expected selenone intermediate 2d (Table 1, entry 4). Finally our procedure was applied to the synthesis of 2-substituted tetrahydrofuran 3j which was previously obtained in 77% yield employing MCPBA in tetrahydrofuran [15]. The oxidation of 1j with MMPP in tetrahydrofuran proceeded smoothly to give 3j in poor yield besides the olefine derived from the elimination of the selenoxide intermediate. The use of methanol as the solvent in the oxidative-cyclization reaction of 1j not only favoured the oxidation reaction, but also suppressed the β-elimination side reaction of the selenoxide intermediate [14]. Thus tetrahydrofuran 3j was obtained in 69% yield (Table 2, entry 7) as the sole product. It is interesting to note that N-heterocyclic compounds 3d and 3f–j are not obtained when Oxone [6] is employed as oxidant. In these cases the products obtained were the corresponding selenoxides and the β-elimination products.

In summary, compared to the widely used oxidant MCPBA, MMPP is cheap, stable in the solid state, safer in handling and easier to use. Furthermore, the water soluble reaction byproducts magnesium phthalate and benzeneseleninate anion are generally easy to separate during work-up; the former could be recovered without additional purification as phthalic acid up to 85%, and the latter as diphenyl diselenide [21]. Finally, the oxidation of selenides to selenones described here is compatible with different functional groups, occurs under mild reaction conditions and the yields are comparable with those obtained by means of peroxy acid MCPBA. Application of the reported oxidation methodology to the synthesis of bioactive molecules is currently under investigation.

© 2014 Temperini et al; licensee Beilstein-Institut.
This is an Open Access article under the terms of the Creative Commons Attribution License (http://creativecommons.org/licenses/by/2.0), which permits unrestricted use, distribution, and reproduction in any medium, provided the original work is properly cited.
The license is subject to the Beilstein Journal of Organic Chemistry terms and conditions: (http://www.beilstein-journals.org/bjoc) 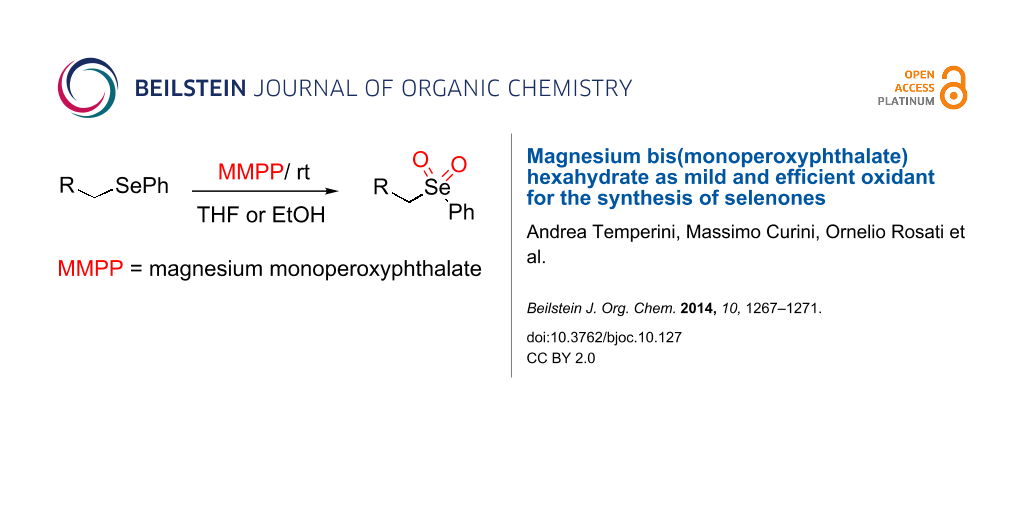