Influence of perylenediimide–pyrene supramolecular interactions on the stability of DNA-based hybrids: Importance of electrostatic complementarity


All articles from this author
Simon M. Langenegger


All articles from this author
Oleg Khorev


All articles from this author
Robert Häner

Aromatic π–π stacking interactions are ubiquitous in nature, medicinal chemistry and materials sciences. They play a crucial role in the stacking of nucleobases, thus stabilising the DNA double helix. The following paper describes a series of chimeric DNA–polycyclic aromatic hydrocarbon (PAH) hybrids. The PAH building blocks are electron-rich pyrene and electron-poor perylenediimide (PDI), and were incorporated into complementary DNA strands. The hybrids contain different numbers of pyrene–PDI interactions that were found to directly influence duplex stability. As the pyrene–PDI ratio approaches 1:1, the stability of the duplexes increases with an average value of 7.5 °C per pyrene–PDI supramolecular interaction indicating the importance of electrostatic complementarity for aromatic π–π stacking interactions.

When two aromatic molecules are in close proximity they often have a tendency to interact non-covalently in a face-to-face stacking arrangement. Face-centered, parallel aromatic π–π stacking interactions have been studied and reviewed in great detail [1-5]. These interactions are especially important for polycyclic aromatic hydrocarbons (PAHs) [6,7]. The interaction is the result of solvophobicity, as well as van der Waals, electrostatic and charge transfer interactions that can lead to a thermodynamically favourable association [8]. It is an important interaction in biological systems, drug receptor interactions, materials sciences, and supramolecular chemistry [8-12]. Such interactions are strongly dependent on the electron density and distribution of the partners [2,9,13-16]. In particular, the interaction between electron-rich (donor) and electron-deficient (acceptor) aromatic rings results in stable aggregates [17-22].

In the DNA duplex, the interaction of the two complementary strands is governed mainly by aromatic π–π stacking interactions, hydrogen bonds, and electrostatic repulsion from the negatively-charged sugar phosphate backbone [10,23-28]. DNA can be regarded as an amphiphilic polymer in which aromatic residues are linked by negatively charged phosphodiester groups [29]. The importance of aromatic and hydrophobic factors for duplex stability was demonstrated by replacing the natural nucleobases by size expanded analogs [30-35].

A classic example of polymeric donor–acceptor complexes are the aedamers (aromatic electron donor acceptor oligomers) pioneered by Iverson and coworkers [18,36,37]. They consist of face-to-face stacked electron-rich naphthalene and electron-poor naphthalenediimide (NDI) chromophores and belong to the broader area of foldamers [38].

DNA has been described as a molecular scaffold for arranging various types of chromophores [39-44]. Recently, we reported that oligoarenotides (oligomers with an alternating phosphodiester-aromatic hydrocarbon motif) exhibit similar structural properties as nucleic acids, and although the aromatic hydrocarbons cannot engage in any sort of Watson–Crick related hydrogen bonding, the individual strands interact via an interstrand stacking motif [45-48]. Herein we describe a series of DNA-based hybrids (Figure 1 and Table 1) containing electron-rich 1,8-dialkynylpyrenes (Y) and electron-poor perylenediimides (PDI, E).

PDIs (Figure 1A) are some of the most widely studied organic chromophores [49-52]. Moreover, we have reported on the aggregation and stacking properties of 1,8- and 1,6-dialkynylpyrene [53,54]. Figure 1B shows the electrostatic potential surface of 1,8-diprop-1-ynylpyrene and N,N’-dimethyl-PDI. The former is considerably more electron-rich/higher electron density (red) than the latter, which is expected to favour an alternating aromatic π–π stacking arrangement of E and Y due to electrostatic complementarity.

We show herein that duplex formation by our chimeric DNA-oligoarenotide strands proceeds in a selective manner, the chromophores on opposite strands interdigitate and stack face-to-face in an organised controlled assembly.

The principle of the system is illustrated in Figure 1. All oligomers are composed of a DNA part and a modified section containing a total of four PDIs (blue) and/or pyrenes (green). Oligomers 1–7 consisting of varying numbers of pyrene or PDI moieties covalently linked to complementary DNA strands were prepared by automated oligonucleotide synthesis using the previously described phosphoramidite pyrene [53] and PDI [55] building blocks.

The DNA stem acts as a supramolecular scaffold, and together with the flexible, negatively-charged phosphate linker allows the chromphores to adopt optimal conformations in aqueous solution and increases the solubility. The strands were hybridised in various combinations (Table 1), and their stability and photophysical properties were investigated. Since the DNA duplex is identical in all hybrids, differences in stability must originate from the modified section. The sequence of the modified part is changed in such a way that annealing of different strands leads to a varying number of pyrene–PDI stacking interactions. Strand 1 is common to all hybrids. The complementary strands 2–6 possess an increasing number of PDIs. Thus, in the resultant hybrids, the number of pyrene–PDI face-to-face stacking interactions also increases steadily from left to right, e.g., duplex 1*2 contains only pyrene–pyrene interactions, whereas duplex 1*6 has the maximum number pyrene–PDI interactions.

Thermal denaturation experiments revealed a clear trend in duplex stability (Figure 2). The thermal stability correlates with the number of pyrene–PDI interactions [56] and increases linearly in the series. The melting temperature (Tm) values are summarized in Table 1.

The results of electrostatic complementarity between an electron-rich pyrene and an electron-poor PDI is highlighted by the fact that duplexes with only pyrene or PDI are considerably less stable (Table 1, hybrids 1*2 and 7*6) than hybrids containing both types of aromatic compounds. Although the actual stability of such duplexes strongly depends on several parameters like, e.g., the geometry of the building blocks and the flexibility of the linkers, a general trend can be deduced from the thermal denaturation results that accounts for the above mentioned design of building blocks and sequences.

The stacking interactions of Y and E in the hybrids could be followed by UV–vis absorption spectroscopy. A significant change in the vibronic band ratio supports the model of an alternating interstrand interdigitation interaction between pyrene and PDI chromophores as proposed in Figure 1. In general, the vibronic band ratio of PAHs gives valuable information on the aggregation state of the molecules [57]. In a stack of only pyrenes (1*2) the vibronic band at 370 nm is higher than that at 390 nm (Figure 3), indicating that the pyrenes are stacked parallel and face-to-face. In contrast, in duplex 1*6 the intensity of the vibronic band 390 nm is higher indicating that the pyrenes are separated from each other by intercalating PDIs [58]. The same absorption behaviour is seen for the PDI vibronic band intensities.

Figure 4 focuses on the vibronic bands of pyrene’s S0→S1 absorption band in duplexes 1*2 to 1*6. An increasing number of PDIs in a stack leads to a stronger vibronic band at 390 nm.

This is in stark contrast to the effect of thermally denaturing duplex 1*2 into two single strands (Figure 5). There, the vibronic band at 370 nm is always the highest indicating that the pyrenes are stacked even at 90 °C in the single strands. Such behaviour was also observed in chrysene-modified DNA [59].

The interaction of two or more dialkynylpyrenes (Y) results in a pronounced excimer fluorescence [53]. Hybridization of single strands 1 and 2 increases the intensity of the excimer (Figure 6), whereas hybridization of single strands 1 and 6 results in an extinction of excimer fluorescence. Such behaviour was also observed in previous work and was explained by an alternating interdigitation interaction of the pyrene with the PDI building blocks [60].

The electrophoretic mobility of relatively small (<1000 kbp), linear DNA strands is inversely proportional to their molecular weight [61]. It serves as a reliable method to demonstrate the formation of double versus single stranded DNA structure. Therefore, the formation of defined short duplexes has been further investigated using polyacrylamide gel electrophoresis (PAGE) experiments. Oligomer single strands 1, 6 and 7 migrate with the same velocity as the 13 bp reference (Figure 7). Strands 1 and 6, however, form a duplex and thus have lower electrophoretic mobility, similar to an 18–20 bp reference. Oligomer 7 has the same DNA sequence as 6, but with 4 PDI molecules instead of 4 pyrenes (see Table 1). Thus when combined, single strands 1 and 7 do not form a duplex due to having non-complementary DNA parts, and migrate on the gel like single strands 1, 6, and 7. These results underline the importance of the complementary DNA segments in aligning the pyrene and PDI chromophores for optimal interaction.

A series of DNA oligonucleotides functionalised with electron-poor perylenediimide (PDI, E) and electron-rich 1,8-dialkynylpyrene (Y) chromophores has been synthesized and their photophysical and thermal melting properties were investigated. UV–vis absorption and fluorescence spectra indicate an alternate, face-to-face, stacking of PDI and pyrene moieties. The DNA portion serves as an ideal scaffold to align the pyrene and PDI chromophores and to study their interaction in solution. The stability of the duplexes shows a clear dependence on the number of pyrene–PDI interactions within the duplex. As the pyrene–PDI ratio approaches 1:1, the stability of the duplexes increases with up to 7.5 °C per pyrene–PDI supramolecular interaction underlining the importance of electrostatic complementarity for aromatic π–π stacking interactions.

We would like to express our sincere gratitude to Prof. Dr. Gion Calzaferri for invaluable suggestions and discussions regarding this work. This work was supported by the Swiss National Foundation (Grant 200020-149148).

Synthetic incorporation of Nile Blue into DNA using 2′-deoxyriboside substitutes: Representative comparison of (R)- and (S)-aminopropanediol as an acyclic linker

© 2014 Winiger et al; licensee Beilstein-Institut.
This is an Open Access article under the terms of the Creative Commons Attribution License (http://creativecommons.org/licenses/by/2.0), which permits unrestricted use, distribution, and reproduction in any medium, provided the original work is properly cited.
The license is subject to the Beilstein Journal of Organic Chemistry terms and conditions: (http://www.beilstein-journals.org/bjoc) 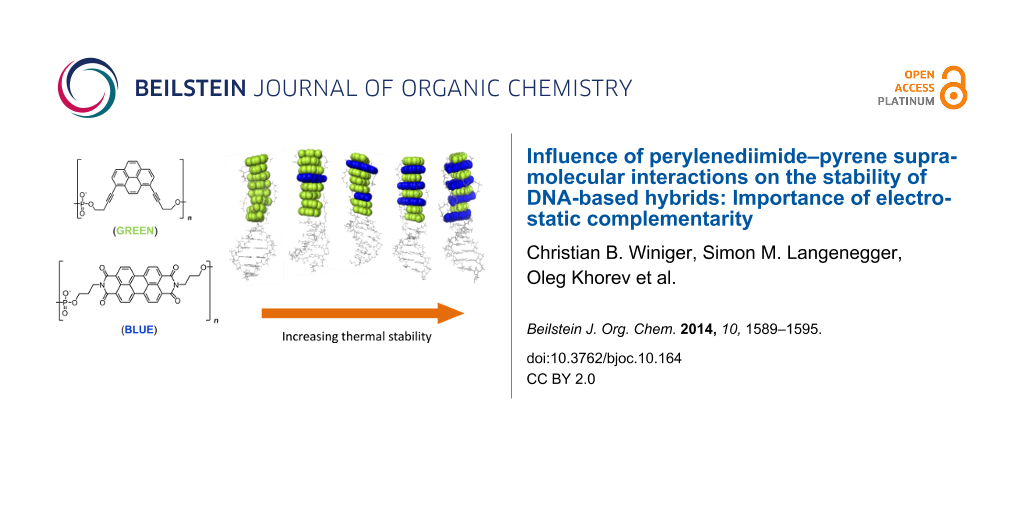