All articles from this author
Yohei Konoshima


All articles from this author
Akitoshi Matono


All articles from this author
Hiroshi Masai


All articles from this author
Tetsuaki Fujihara


All articles from this author
Yasushi Tsuji

We synthesized symmetrically insulated oligo(para-phenylene) and oligothiophene with a pseudo-linked [3]rotaxane structure by full rotation of glucopyranose units via a flipping (tumbling) mechanism in the π-conjugated guest having two permethylated β-cyclodextrin units at both ends. We also succeeded in the synthesis of an organic-soluble fixed [3]rotaxane by a cross-coupling or complexation reaction of thus formed pseudo linked [3]rotaxane. Oligo(para-phenylene), oligothiophene, and porphyrin derivatives were used as π-conjugated guests with stopper groups.

Insulated molecular wires (IMWs) [1,2], which feature π-conjugated polymer chains covered by protective sheaths, have attracted considerable attention as next-generation mono-molecular electronic devices because of their potential conductivity and luminescent properties [3-5]. Cyclodextrin (CD) derivatives are widely used as a protective sheath for the synthesis of IMWs because they are easily obtainable and efficient in the inclusion of various polymers into their cavity via hydrophobic interactions in water [6,7]. General methods for the synthesis of π-conjugated polymer-based IMWs using CD derivatives involve (I) threading π-conjugated polymers through CD [8,9] using a method developed by Harada for the synthesis of a polyrotaxane [10], (II) polymerization of pseudo [2]rotaxane monomer formed by self-inclusion of a π-conjugated guest with CD [11], and (III) copolymerization of the thus-formed pseudorotaxane with linker molecules [12]. These polymers are soluble in water but generally insoluble in organic solvents; this is because the hydrophilic CD covers the organic soluble π-conjugated polymer chains [13]. Uncovered sites are also randomly present because of shuttling of CDs along the π-conjugated chain and remnant water molecules; these affect the charge-transport ability and are disadvantageous for the use of these IMWs as electronic materials. Therefore, we decided to use permethylated cyclodextrin (PMCD) provided by permethylation of all the hydroxy groups of CD. However, the low solubility of PMCD in water as compared with native CDs or other randomly methylated CDs such as 2,6-dimethyl-β-cyclodextrin impedes the formation of self-inclusion complexes via hydrophobic interactions in water. To rise above this problem, we prepared organic-soluble host–guest-linked PMCD derivatives that can undergo intramolecular self-inclusion to form an insulated molecule with an [1]rotaxane structure in methanolic aqueous solutions, where PMCD derivatives are soluble in. We recently developed a new method for synthesizing π-conjugated IMWs with polyrotaxane structures via polymerization of π-conjugated [1]rotaxane monomers bearing PMCDs as macrocycles [14]. Further, we confirmed that such IMWs with poly[1]rotaxane structure are highly soluble in a variety of organic solvents and have good rigidity, photoluminescence efficiency [15], and charge mobility [16,17]. A key step for the synthesis of these IMWs is the preparation of insulated π-conjugated monomers with [1]rotaxane structures by self-inclusion of π-conjugated monomer-linked PMCDs followed by elongation of the π-conjugated units via cross-coupling in a hydrophilic solvent, such as an aqueous 50% methanol solution [18]. For this method, it is necessary that the molecular length of the π-conjugated guest is less than the internal diameter of the CD and similar to the depth of PMCD in order to form the self-inclusion complex (Figure 1b). When the π-conjugated guest is shorter than the depth of PMCD, the cross-coupling reaction is strongly inhibited because the reaction has to occur in the PMCD cavity (Figure 1a). On the other hand, a self-inclusion complex does not form if the guest is longer than the internal diameter of PMCD (Figure 1c). Thus far, we have succeeded in the synthesis of insulated π-conjugated monomers with [1]rotaxane structures using oligo(phenylene–ethylene) units, which have the appropriate length, as the π-conjugated guests for the fixation of self-inclusion complexes by elongation of the guest unit via cross-coupling (Figure 1b). However, this method can only be applied to the synthesis of insulated oligo(phenylene–ethylene) monomers. To synthesize other insulated π-conjugated molecules, we became interested in another insulation technique to replace this self-inclusion: full rotation of the glucopyranose units of methylated cyclodextrin by alteration of the relative orientation of the D-glucopyranoside rings via a flipping (tumbling) mechanism as shown in Figure 2 [19-22]. From the results of our study on the synthesis of organic-soluble π-conjugated rotaxanes, we report herein the synthesis of insulated oligo(para-phenylene) [23] and oligothiophene [24] with linked [3]rotaxane structures via the flipping phenomenon [25].

Kano and co-workers reported the synthesis of a linked pseudo [3]rotaxane involving a water-soluble porphyrin unit with carboxylate groups as the guest unit by double self-inclusion via sequential flipping of permethylated β-cyclodextrin (PM β-CD) in water [26]. To synthesize an organic-soluble insulated π-conjugated rotaxane, we applied this technique to the synthesis of an insulated porphyrin without water-soluble functional groups. The synthetic route to the PM β-CD based linked [3]rotaxane precursor with a 5,15-di([1,1'-biphenyl]-4-yl)porphyrin backbone as the guest unit is shown in Scheme 1. In order to fix the pseudo [3]rotaxane structure, we introduced two bromo groups (cross-coupling reaction point) at both terminal positions of the 5,15-di([1,1'-biphenyl]-4-yl)porphyrin unit and two PM β-CD groups at meta position to the bromo groups. 7-O-Monotosyl PM β-CD 1 was synthesized from a native β-cyclodextrin in two steps using an established protocol [27]. Reaction of 1 with 5-bromo-2-iodophenol (2) afforded benzene-linked PM β-CD 3. The 2:1 Suzuki cross-coupling reaction of thus-formed 3 with dipinacolborane porphyrin derivative 4 gave rise to precursor of pseudo [3]rotaxane 5. It should be noted that pseudo-linked [3]rotaxane 6 formed quantitatively via double self-inclusion through flipping of 5 in an aqueous 50% methanol solution.

To synthesize an organic-soluble linked [3]rotaxane, we then fixed this pseudo rotaxane structure, which was only present in 50% methanol aqueous solution. The capping reaction by Suzuki cross-coupling with pinacolboron derivative 7 bearing PM α-CD as the bulky stopper group was carried out under the same hydrophilic solvent conditions as in the formation of 6 (Scheme 2). The desired fixed [3]rotaxane 9 was isolated in 31% yield by preparative size exclusion chromatography using CHCl3 as the eluent. The corresponding uninsulated compound 8 as a reference was also intentionally synthesized by the reaction of 5 with 7 in hydrophobic solvent (toluene/H2O 5:1) instead of hydrophilic solvent (CH3OH/H2O 1:1). Although the MALDI–TOF mass spectrum of 8 and 9 exhibited the same signal at m/z = 6097 corresponding to [8 or 9 + Na]+, each 1H NMR spectrum of those showed the pure single product but completely different, respectively. These results suggest that we succeeded in the selective synthesis of 8 and 9 by simply changing the reaction solvent.

We next applied this synthetic method to other π-conjugated guests. Scheme 3 shows the synthetic routes to precursor of PM β-CD based insulated oligothiophene. Mono-6-desmethyl PM β-CD alcohol 10 was synthesized from 1 using sodium naphthalenide [27]. The reaction of the thus-formed monoalcohol with 2-bromo-3-(bromomethyl)thiophene (11) afforded thiophene-linked PM β-CD 12. Pd-catalyzed Stille cross-coupling of 12 with bithiophene 13 bearing a silyl-protected alkynyl group afforded trithiophene-linked PM β-CD 14. After the deprotection of the triisopropyl group of 14 and the Glaser dimerization reaction of 15, symmetrical oligothiophene 16 bearing two PM β-CDs was obtained. Treatment of 16 with Na2S and KOH followed by dibromination by N-bromosuccinimide formed dibromo-heptathiophene 17 with two PMCDs.

Pseudo linked [3]rotaxanes 21 and 22 were also formed quantitatively in an aqueous 50% methanol solution via double self-inclusion through flipping of 17 and 20, respectively (Scheme 5). The formation of these inclusion complexes were also confirmed by 1H NMR spectroscopy in different solvents (Figure 4 and Figure 5, Supporting Information File 1, Figure S2). These linked [3]rotaxanes can be key monomers for synthesizing organic soluble IMWs bearing polythiophene or poly(para-phenylene) as backbone units.

We next fixed the pseudo rotaxane structure by complexation instead of cross-coupling reaction (Scheme 6). First, we introduced pyridyl groups at the terminal positions of hexa(para-phenylene) precursor 20 by Suzuki cross-coupling with para-pyridylboronic acid to generate 23. After confirmation of the formation of pseudo [3]rotaxane 24 via flipping of 23 in CD3OD/D2O 1:2 solution by 1H NMR analysis, we capped this pseudo [3]rotaxane structure by reacting 24 with rhodium porphyrin complex 25 in chloroform to form fixed [3]rotaxane 26 in 17% isolated yield [28]. The structure of 26 was confirmed by 1H NMR analyses in CDCl3. The results suggest that 26 maintains a [3]rotaxane structure even in organic solvents because it is capped with sterically bulky porphyrin units, which impede the reverse flipping of the PM β-CD units.

As shown in Figure 6, the unique fixed [3]rotaxane structure of 26 was confirmed by 2D 1H ROESY NMR analysis: there are obvious nuclear Overhauser enhancements (NOEs) between the protons on the hexa(para-phenylene) unit and the H3 and H5 protons on the interior of the permethylated cyclodextrin [29]. These experimental results indicated that the rotaxane structure was constructed between PM β-CDs and para-phenylene as hosts and guest, respectively.

This research was supported by the Funding Program for JSPS Research Fellow, Next Generation World-Leading Researchers, and Grant-in-Aid for Scientific Research on Innovative Areas (“Molecular Architectonics” and “Soft Molecular Systems”) from MEXT, Japan.

© 2014 Terao et al; licensee Beilstein-Institut.
This is an Open Access article under the terms of the Creative Commons Attribution License (http://creativecommons.org/licenses/by/2.0), which permits unrestricted use, distribution, and reproduction in any medium, provided the original work is properly cited.
The license is subject to the Beilstein Journal of Organic Chemistry terms and conditions: (http://www.beilstein-journals.org/bjoc) 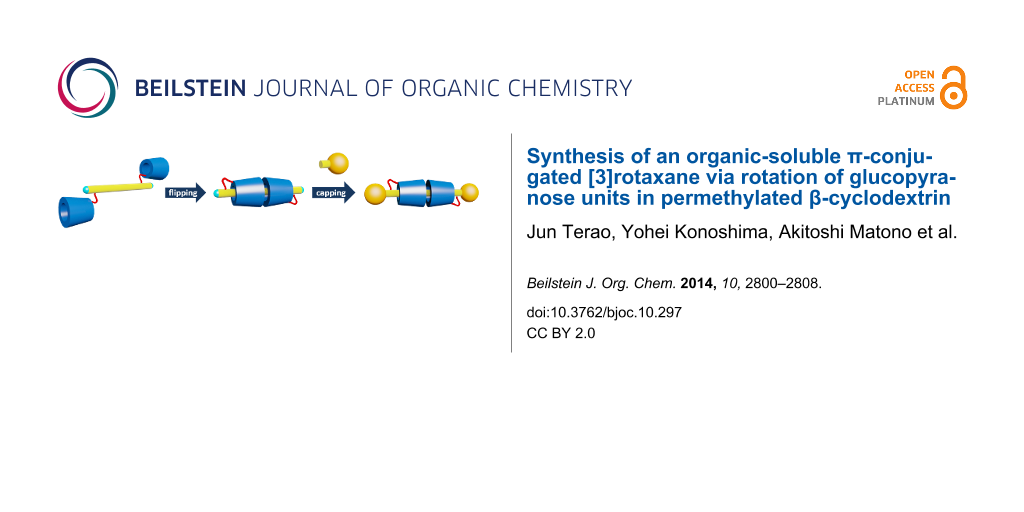