Towards allosteric receptors – synthesis of β-cyclodextrin-functionalised 2,2’-bipyridines and their metal complexes

Herein, we present three new 2,2’-bipyridines that carry two β-cyclodextrin moieties in different substitution patterns. When coordinated by zinc(II) or copper(I) ions (or their complexes), these compounds undergo conformational changes and switch between “open” and “closed” forms and thereby bringing together or separating the cyclodextrin moieties from each other.

In biological systems, recognition events play a major role to guarantee the selectivity of essential processes. Multivalent [1,2] and cooperative binding [3-5] are two of the major concepts to ensure and control the efficiency in those events and the associated complex biochemical cascades following. In order to regulate several of their metabolical functions, a process named “allosteric regulation” is used by enzymes and proteins [6], which stands for cooperative effects in the binding of more than one substrate to different sites of a receptor. After binding of the first substrate (the effector), the receptor changes its conformation, and by this enhancing (positive allosteric cooperativity) or hampering (negative allosteric cooperativity) the binding of another substrate at a second binding site.

This powerful regulatory concept has become quite interesting in supramolecular chemistry, and the development of artificial receptor systems which can be controlled by allosteric effects comes out of it [7-14].

2,2’-Bipyridines have been demonstrated to be excellent artificial allosteric centres due to their well-known ability to switch between syn- and anti-conformations as an answer to an external stimulus [15]. This switching process can be controlled either by adding or removing suitable transition metal ions or their complexes [16] or by adjusting the pH value [17-19]. The latter, however, is not as secure as using metal ions because of three possible protonation states (not protonated: anti, protonated once: syn, protonated twice: anti) instead of two states using metal ions (not coordinated: anti, coordinated: syn) and was not used in our work for this reason.

Some time ago we developed a series of 2,2’-bipyridine-based allosteric analogues [20-22] of the well-known resorcinarene-based hemicarcerands [23,24]. However, these possess only rather shallow binding sites that bind non-polar substrates via dispersive interactions. Hence, we wanted to take this approach one step further by using β-cyclodextrins as another class of macrocyclic compounds that are very well-known for their excellent recognition properties towards non-polar substrates [25]. Depending on the substitution pattern for the central 2,2’-bipyridines, three conceptually different types of allosteric receptors can be obtained: 4,4’- or 6,6’-substitution, both leading to positive allosteric receptors, meaning that they adopt an open anti-conformation in the free state where the two cyclodextrins cannot interact with a substrate in a cooperative fashion (off-state) but change their conformation to a closed syn-conformation (on-state) upon binding of a suitable transition metal ion or complex as an effector. This is shown schematically for a 4,4’-substituted bipyridine-based receptor in Scheme 1.

However, these two scenarios differ in the fact that the effector is bound close to the substrate in case of a 6,6’-substitution whereas it is bound in a remote place in case of a 4,4’-substitution. In contrast, a 4,6’-substitution leads to a negative allosteric system which adopts the closed on-state in the absence of the effector and changes its conformation to the open off-state upon binding of it. In this article we present the synthesis of three new cyclodextrin-functionalised 2,2’-bipyridines 1–3 differing in the bipyridine’s substitution pattern (Scheme 2) and their metal complexes.

The synthesis of 1–3 requires the three different 2,2’-bipyridines that carry isothiocyanate functions and a monoaminated β-cyclodextrin that could be coupled with each other via two-fold nucleophilic addition.

Symmetrically 4,4’- and 6,6’-disubstituted 2,2’-bipyridines were prepared starting from commercially available 4-amino-2-chloropyridine (4) and 2-amino-6-bromopyridine (5), respectively. After protection of the amino functions as 2,5-dimethylpyrroles, pyridines 6 and 7 were transformed into the corresponding 2,2’-bipyridines 8 and 9 via a nickel-catalysed homo-coupling reaction in excellent yields [26]. The non-symmetric 4,6’-disubstituted bipyridine 10 was obtained in good yield from a Negishi cross-coupling of 6 and 7 [27]. Cleavage of the pyrrole protecting groups of 8–10 with hydroxylamine provided the corresponding diamines 11–13 [26] in satisfying to excellent yields which were finally reacted with thiophosgene to give rise to the desired diisothiocyanates 14–16 (Scheme 3) [28].

β-Cyclodextrin (17) was monotosylated by the reaction with tosyl chloride to give 18 in moderate yield [29]. Nucleophilic substitution of the sulfonate against an azide then furnished 19 [30] which could by peracetylated into 20 [31] using acetic acid anhydride both in decent yields. Staudinger reduction of the azide group of 20 then afforded the desired monoaminated cyclodextrin 21 (Scheme 4).

Finally, nucleophilic addition of 21 to the diisothiocyanato-2,2’-bipyridines 14–16 was found to proceed smoothly in dry dichloromethane at room temperature to furnish the desired bis(cyclodextrin)-functionalised 2,2’-bipyridines 1, 2, and 3 in very good yields of 92, 93, and 86% yield, respectively (Scheme 5).

With our three cyclodextrin-functionalised bipyridines in hands, we then examined their coordination behaviour towards different transition metal ions (or their complexes) to see whether these could act as effectors. In our previous work, silver(I) and copper(I) salts as well as pentacarbonylrhenium(I) chloride proved to be good effectors for our allosteric receptors [20-22]. Hence, we also started with these here. Unfortunately, silver(I) ions turned out to be not effective in this case. Although, they seem to form complexes with compounds 1–3, we did not observe any of the characteristic shifts of the signals assigned to the protons of the bipyridine moiety that would indicate successful binding of the silver(I) ions to the nitrogen atoms. Thus, we conclude that the soft silver(I) ions rather bind to one of the sulfur atoms of the thiourea groups. This, however, does not cause the necessary conformational change of the bipyridine structure to potentially affect the binding of another substrate.

Rhenium(I), on the other hand, obviously prefers coordination to nitrogen compared to sulfur as we could demonstrate by coordinating 4,4’-dithioisocyanato-2,2’-bipyridine (14) to it. Figure 1 shows the molecular structure of this [(CO)3Re(14)Cl] complex obtained by X-ray diffraction analysis.

Unfortunately, we were neither able to coordinate rhenium(I) to our bipyridines 1–3 nor did we succeed to prepare the rhenium complex [(CO)3Re(1)Cl] by using [(CO)3Re(14)Cl] and reacting it with aminocyclodextrin 21.

Next, we tried copper(I) ions as effectors. Copper(I) ions indeed form complexes very fast. However, the complexes of 1 and 3 are obviously prone to rapid oxidation to copper(II) species. These are paramagnetic complexes which cannot be analysed by NMR spectroscopy. Since this technique would be our preferred analytical tool to study the host–guest chemistry of these systems in the future, however, we did not investigate these further. Interestingly, the copper(I) complexes of 2 were much less sensitive to oxidation. This might be a consequence of the steric crowding caused by the 6,6’-disubstitution of the bipyridine which was found to give well-defined 1:1 [Cu(2)]+ complexes in this case (Figure 2).

We then turned our attention to zinc(II) ions. These proved to be capable to act as effectors in the desired manner. We observed sharp signals in the NMR when we mixed the Zn(BF4)2 and ligands 1 (Figure 3) and 3 in a 1:2 ratio.

However, in the latter case, the expected [Zn(3)2] or [Zn(3)] complexes could not be identified by mass spectrometry. Hence, we hesitate to claim that zinc(II) ions are reliable effectors for ligand 3. In the case of 1, however, we were able to find signals corresponding to the expected well defined [Zn(1)2] complexes which, together with the NMR data, proof that zinc(II) ions are suitable to act as an effector for 1.

Changing the substitution pattern to 6,6’ like in ligand 2, however, makes it impossible to form a 1:2 complex due to the steric crowding around the metal binding site. In this case we again observed only a 1:1 complex which probably coordinates solvent molecules to saturate the metal ion’s coordination sphere as we did already in the case of copper(I) ions (Figure 4). Thus, copper(I) and zinc(II) ions can both act as effectors for 2.

In order to investigate the metal complexes’ host–guest chemistry at a later stage in a quantitative manner, however, a 1:2 metal-to-ligand stoichiometry like in the [Zn(1)2]-complexes is not very easy to study because one has to deal with a very complicated equilibrium between 1:2:2, 1:2:1, 1:2:0 and even more complicated metal-to-ligand-to-substrate assemblies which would be very difficult to handle. Thus, we wanted to restrict our systems to a 1:1 stoichiometry of metal-to-ligand complexes also with ligands 1 and 3. This can be achieved by blocking parts of the coordination sphere of a metal ion by a kinetically and thermodynamically stable binding ligand. In this way one can make sure that just one single other chelating ligand like a 2,2’-bipyridine can be bound to this metal complex fragment. Sterically hindered 1,10-phenanthrolines and their copper(I) complexes have been proven to be perfectly suited for this purpose [21,32-35]. Thus, we chose to prepare 2,9-bis[2,6-dimethoxyphenyl]-1,10-phenanthroline (22) as such a sterically congested ligand (Scheme 6) [36].

22 was synthesised starting from 1,10-phenanthroline via N,N'-dialkylation to dibromide 23 in very good yield [37]. Oxidation of 23 with potassium hexacyanoferrate then afforded diamide 24 in moderate yield [38]. Its subsequent chlorination with a mixture of phosphorous pentachloride and phosphoryl chloride furnished dichloride 25 in quantitative yield [38]. Finally, two-fold Suzuki cross-coupling of 25 with 2,6-dimethoxyphenylboronic acid (26) derived from 1,3-dimethoxybenzene via lithiation and borylation [39] afforded 22 in very good yield [40-42].

Unfortunately, the strategy to prepare 1:1 complexes [Zn(22)]2+ and [Cu(22)]+ first and then let them react with 3 did not result in the formation of the desired heteroleptic complexes. Obviously, the complex fragments are just too large to fit into the sterically congested metal binding site of 3. Hence, we have to conclude that, unfortunately, we have not succeeded in finding a suitable effector for this ligand yet.

Hence, zinc(II) ions or their complexes with a single, sterically demanding phenanthroline ligand like 22 as well as a similar [Cu(22)]+ complex were all found to be good effectors for ligand 1 forming either 1:2 or 1:1 effector:ligand complexes.

We have synthesised three new β-cyclodextrin-functionalised 2,2’-bipyridines and their complexation behaviour towards several metal salts or their complexes was investigated. Among those (pentacarbonyl)rhenium chloride and silver(I) ions proved to be ineffective to cause the desired long-range conformational changes. Unfortunately, we have also not yet succeeded in finding a suitable metal ion or a complex fragment that can efficiently bind to 4,6'-disubstituted bipyridine 3, and hence, act as an effector to cause switching from the closed "on"-state to the open "off"-state. The sterically crowded 6,6'-disubtituted bipyridine 2, however, readily formed 1:1 complexes with both zinc(II) and copper(I) ions, and hence, can be switched between a closed "on"-state to an open "off"-state. Zinc(II) ions do also form the expected dimeric complexes with 4,4'-disubstituted bipyridine 1. However, such a 1:2 effector–bipyridine ratio could lead to a difficult-to-handle host–guest chemistry when it comes to binding of additional guest molecules due to very complicated equilibria between 1:2:2, 1:2:1, 1:2:0 and even more complicated metal-to-ligand-to-substrate assemblies. Zinc(II) or copper(I) phenanthroline complexes with sterically very demanding phenanthrolines were found to be effective to achieve a 1:1 effector–receptor stoichiometry. This makes these ligands promising candidates that could act as potential allosteric receptors whose recognition behaviour can be largely influenced by those effectors. We are currently evaluating the host–guest chemistry of these compounds and their metal complexes which will be reported in near future.

Experimental data of all new compounds, NMR and ESI mass spectra of compounds 1–3, 14, 21, and 22 and their metal complexes.

Financial support from the DFG (SFB 624) is gratefully acknowledged. G.S. thanks Prof. Dr. A. C. Filippou for support. C.K. thanks the Studienstiftung des Deutschen Volkes for a doctoral scholarship.

The simple production of nonsymmetric quaterpyridines through Kröhnke pyridine synthesis

© 2014 Kremer et al; licensee Beilstein-Institut.
This is an Open Access article under the terms of the Creative Commons Attribution License (http://creativecommons.org/licenses/by/2.0), which permits unrestricted use, distribution, and reproduction in any medium, provided the original work is properly cited.
The license is subject to the Beilstein Journal of Organic Chemistry terms and conditions: (http://www.beilstein-journals.org/bjoc) 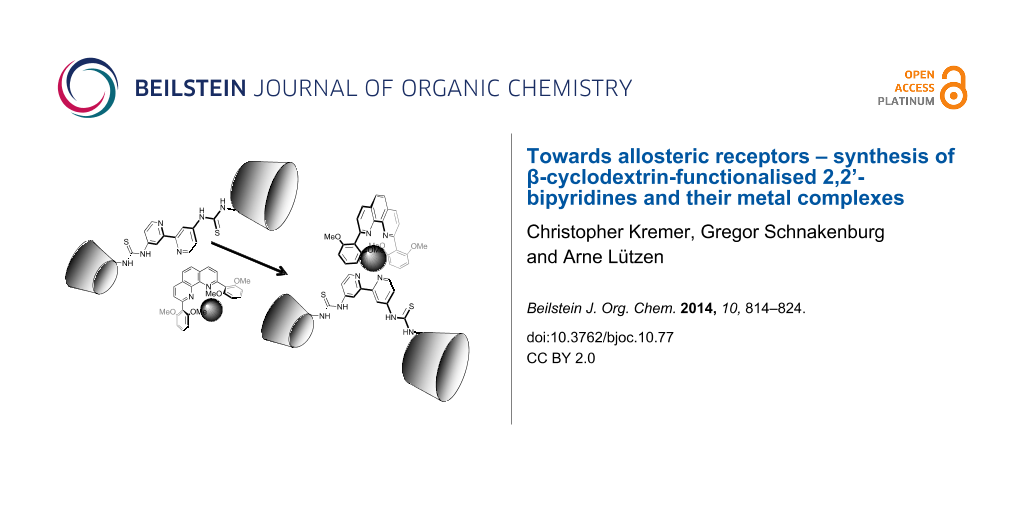