All articles from this author
Nadia Pastori


All articles from this author
Simona Prosperini


All articles from this author
Carlo Punta

Following an optimized multicomponent procedure, an aryl amine, a ketone, and a cyclic ether or an alcohol molecule are assembled in a one-pot synthesis by nucleophilic radical addition of ketyl radicals to ketimines generated in situ. The reaction occurs under mild conditions by mediation of the TiCl4/Zn/t-BuOOH system, leading to the formation of quaternary β-amino-ethers and -alcohols. The new reaction conditions guarantee good selectivity by preventing the formation of secondary products. The secondary products are possibly derived from a competitive domino reaction, which involves further oxidation of the ketyl radicals.

During the course of our ongoing investigation of the role of titanium salts in mediating selective radical transformations [13,14], we have developed new, simple protocols for the synthesis of complex organic compounds through nucleophilic radical addition to imines generated in situ [15]. Several recent contributions to the field clearly illustrate how the free-radical approach can be considered a valuable alternative to classical ionic protocols [16-23].

In this context, we succeeded in combining the advantages of the radical synthetic route with the high added value of a multicomponent approach. In fact, our procedure requires neither the preformation of imines nor anhydrous media, due to the coordinating effect of titanium salts, which promote the one-pot synthesis of amino derivatives according to a classical MCR.

The basic approach consists of the simple mixing of an aniline, an aldehyde or ketone, and a suitable source of nucleophilic radicals (Nu–H = formamide [24,25], methanol [26,27], ethers [28]), in the presence of titanium chlorides, and slowly dropping a solution of hydroperoxide (H2O2 or tert-butyl hydroperoxide (t-BuOOH)) into the reaction medium (Scheme 1).

Aqueous TiCl3 proved particularly effective for promoting the formation and functionalization of aldimines (Scheme 1, entry a), but was necessarily replaced with the redox TiCl4 (CH2Cl2)/Zn system when operating in the presence of ketones (Scheme 1, entry b), as the corresponding ketimines were more sensitive to the aqueous medium [25,27].

When we first tried to extend this procedure to the addition of alcohols other than methanol, a side reaction competed with the multicomponent mechanism, that is, the oxidation of the ketyl radical derived from the alcohol to the corresponding aldehyde. This transformation significantly affected the selectivity in the desired products.

Taking advantage of this secondary process, we performed a domino reaction, where the alcohol served as the source of both the nucleophilic radical and the aldehyde necessary for the in situ formation of the aldimine (Scheme 2, entry a) [29]. Surprisingly, the same reaction was even more efficient when performed in the presence of the Ti(IV)/Zn/t-BuOOH system (Scheme 2, entry b). Under the latter conditions, the domino approach was also successfully extended to cyclic ethers, promoting the consecutive electrophilic amination to imines through a ring opening of the ether (Scheme 2, entry c) [30].

Even though it is interesting by itself, this domino reaction limits the general approach towards the synthesis of a wider range of β-amino-alcohols and ethers. The importance of these derivatives is well-documented. They are the key components of several synthetic and natural molecules, exhibiting signiﬁcant biological and chemical properties [31-35]. For this reason, efforts are continuously being devoted to the development of new, efficient and simple synthetic procedures [36-43]. Herein we report the results of our in depth investigation to allow for the one-pot multicomponent addition of alcohols and ethers to ketimines generated in situ, by inhibition of the domino reaction.

The optimization of the multicomponent approach was conducted by the one-pot assembly of p-toluidine, tetrahydrofuran (THF) and acetone in the presence of the TiCl4/Zn system as a model reaction. The reaction occurred when adding a solution of t-BuOOH in THF dropwise into the reaction mixture. The different process conditions, resulting in the synthesis of 1a, are reported in Table 1.

aYield determined by 1H NMR spectroscopy with acetophenone added as an internal standard to the crude reaction mixture after work-up. bData taken from [30]. cTHF was added dropwise diluted in a 80 wt % solution of t-BuOOH. dIn the absence of TiCl4.

As previously described, the use of THF as solvent in the absence of acetone led to the selective formation of the domino product, 2a, in a high yield (Table 1, entry 1). While the simple addition of acetone to the reaction mixture promoted the production of the desired 1a, the selectivity of the process was poor due to the concomitant formation of 2a (Table 1, entry 2). We ascribed this result to the high volume of THF, which competes with the ketone in the formation of imines (Scheme 3).

Indeed, by simply using acetone as a solvent, and adding the minimum quantity of THF with t-BuOOH necessary, we succeeded in suppressing the formation of 2a, achieving an analogous yield of 1a, but with complete selectivity (Table 1, entry 3). Nevertheless, this solution hindered the ultimate goal of developing a general procedure for the addition of ketyl radicals to a wide range of ketimines. Other ketones besides acetone have limited applications as solvents, both due to economic issues and with regards to their limited solubilization properties. For this reason, we verified the possibility of using dichloromethane as a solvent by decreasing the amount of acetone down to 1 mL (Table 1, entry 4), and to 5 mmol (Table 1, entry 5), achieving even higher yields (up to 77%).

As expected, in the absence of TiCl4 (Table 1, entry 8) or Zn (Table 1, entry 9), no conversion was observed. Moreover, we also replaced Zn with other metals, namely Mn (Table 1, entry 6) and Fe (Table 1, entry 7), with the aim of further improving the efficiency of the process, however, both cases resulted in the lowest conversion observed. With the optimized conditions, we proceeded exploring the scope of the reaction and the results are reported in Table 2.

aYield determined by 1H NMR spectroscopy with acetophenone added as an internal standard to the crude reaction mixture after work-up. bYield of isolated products based on the starting amines. cData taken from [27]. dAlcohol was used as solvent. e9% of domino reaction product 2b was observed.

The addition of THF to ketimines generated in situ afforded the desired products 1a–1g in good yields, both starting from different acyclic and cyclic ketones (Table 2, entries 1–5) and from different amines (Table 2, entry 6 and entry 7). As already observed in our previous reports, secondary anilines were not converted under our operative conditions, likely due to an enhanced steric hindrance in the formed ketimine. The same reaction occurred by replacing THF with 1,3-dioxolane, 1,4-dioxane, and diethyl ether, affording the corresponding products 1h, 1i, and 1j, respectively, with complete selectivity but lower yields.

Finally, for the first time, the aminoalkylation was also extended to alcohols other than methanol (Table 2, entry 11), namely ethanol and propanol, achieving high yields and high selectivity in all cases while successfully inhibiting the domino side-reaction (Table 2, entries 12–16). Although ethanol could be used as a solvent without substitution with CH2Cl2 in the reaction medium, when operating in the presence of propanol, it was necessary to adopt the same optimized conditions of THF. Only when reacting p-toluidine with 2-butanone in ethanol, a 9% of domino byproduct 2b (Scheme 5) was observed.

We have reported optimized conditions for the selective free radical nucleophilic addition of ethers and alcohols to ketimines generated in situ under non-anhydrous conditions. The protocol consists of a three-component, one-pot reaction involving an aromatic amine, a ketone, and the source of the ketyl radical. The new conditions prevent the undesired domino side-reaction from occurring, whereby the ketyl radical undergoes fast oxidation and generates new carbonyl derivatives, which in turn competes with ketones in the formation of imines.

Titanium salts play a key role, both favoring the formation of ketimines and promoting their reactivity towards the nucleophilic addition. The general applicability of the reaction has been demonstrated by reacting different aromatic amines, ketones, ethers and alcohols. This approach provides a new protocol for the simple and convenient synthesis of a wide range of amino derivatives, under mild conditions without requiring isolation and purification of intermediates, according to a classical multicomponent reaction.

All materials were purchased from commercial suppliers and used without further purification. All reactions were performed at room temperature (20 °C) under nitrogen atmosphere. The following solutions were used: 1 M solution of TiCl4 in CH2Cl2 and 80 wt % solution of t-BuOOH. NMR spectra were recorded at 400 MHz for 1H and 100 MHz for 13C. ESIMS was performed with an Esquire 3000 plus ion-trap mass spectrometer equipped with an ESI source. Tandem mass spectra were obtained by CID with helium collision gas after isolation of the precursor ion. Mass spectra were additionally measured with a GC–MS instrument, using a gas chromatograph equipped with an SBP-1 fused silica column (30 m × 0.2 mm i.d., 0.2 μm film thickness) and helium as carrier gas. The IR spectra were obtained by a Varian 640 high-performance FTIR spectrometer. The melting points were measured on a Büchi 535 apparatus. Flash column chromatography was performed by using 40–63 μm silica gel packing; the eluent was chosen in order to move the desired components to Rf 0.35 on analytical TLC.

In a manner similar to the procedures of [25] and [27], a homogeneous solution of CH2Cl2 (5 mL), containing an aryl amine (2 mmol), a cyclic or acyclic ketone (5 mmol), and TiCl4 (2.5 mL of 1 M solution in CH2Cl2, 2.5 mmol), was stirred at room temperature under N2 atmosphere. After approximately 30 min, Zn powder (300 mg, ca. 5 mmol) was suspended in the reaction medium, and an aqueous 80 wt % solution of t-BuOOH (10 mmol, ca. 1.2 mL), diluted in the ether of choice (9 mL), was added dropwise. The reaction has the appearance of a titration experiment and proceeds with periodic changes of color from orange to violet. t-BuOOH was added until a pale orange color was barely maintained. At this point, a second portion of TiCl4 (2.5 mmol) and of Zn powder (300 mg, ca. 5 mmol) were added and the dropwise addition of t-BuOOH was continued until the solution reached a stable orange color. The co-solvent was removed under vacuum and the reaction was quenched with H2O (5 mL). A 30% aqueous NH3 solution was added until a basic pH was reached (a white precipitate due to Ti(IV) hydroxide was observed). The resulting aqueous solution was extracted with EtOAc (3 × 50 mL), and the combined organic layers were dried over Na2SO4 and concentrated in vacuum. Purification of the crude residue by flash chromatography afforded aminoalkylated ethers as the last eluting products. Yields of isolated products are based on the starting amine.

© 2015 Rossi et al; licensee Beilstein-Institut.
This is an Open Access article under the terms of the Creative Commons Attribution License (http://creativecommons.org/licenses/by/2.0), which permits unrestricted use, distribution, and reproduction in any medium, provided the original work is properly cited.
The license is subject to the Beilstein Journal of Organic Chemistry terms and conditions: (http://www.beilstein-journals.org/bjoc) 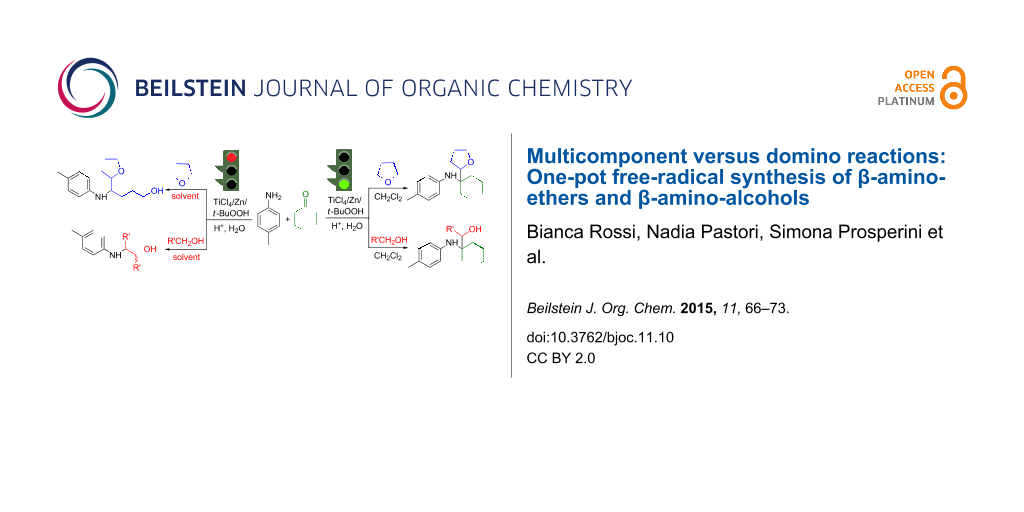