All articles from this author
Mohammad Saifuddin


All articles from this author
Rashid Ali

A simple synthetic strategy to C2-symmetric bis-spiro-pyrano cage compound 7 involving ring-closing metathesis is reported. The hexacyclic dione 10 was prepared from simple and readily available starting materials such as 1,4-naphthoquinone and cyclopentadiene. The synthesis of an unprecedented octacyclic cage compound through intramolecular Diels–Alder (DA) reaction as a key step is described. The structures of three new cage compounds 7, 12 and 18 were confirmed by single crystal X-ray diffraction studies.

Design and synthesis of architecturally intricate cage molecules is a worthwhile challenge. The unique properties associated with the carbocyclic cage frameworks are the main reasons for pursuing their synthesis [1,2]. They are valuable synthons to assemble natural as well as non-natural products [3,4]. In addition, the cage molecules are interesting targets because of their unusual structural features such as the deformation of the ideal C–C bond angles, high degree of symmetry and the enhanced ring strain etc. [5-18].

The structures of a variety of intricate cage systems, for example, snoutane (1) [5], pentaprismane (2) [10], dodecahedrane (3) [11-19], cage crown ether 4 [20], amantadine (5) and pushpakenediol (6) [21] along with the target molecule 7 are shown in Figure 1. Interestingly the amino group containing cage molecule amantadine (5) exhibits antiviral properties [22].

Although, several methods are available for the construction of cage compounds [7,23-33], the synthesis of symmetrical spiro-cage molecule 7 seems to be a synthetic challenge due to the proximity of the two carbonyl groups in dione 10 which provides a hemiketal with various nucleophiles [34-39]. In view of various applications of cage molecules and the documented difficulties in their synthesis, we conceived a short synthetic route to C2-symmetric bis-spiro-pyrano cage compound 7. To this end, the Grignard addition and ring-closing metathesis (RCM) are considered as viable options. The retrosynthetic analysis to the target bis-spiro-cage compound 7 is shown in Figure 2. The target compound 7 could be obtained from O-allylation of the Grignard addition product 11 followed by the two-fold RCM sequence. The required cage dione 10 could be constructed in two steps from readily available starting materials such as 1,4-naphthoquinone (9) and cyclopentadiene (8) [40,41].

In connection with the synthesis of new cage molecules, we reported a new approach to the hexacyclic dione 10 and related systems via Claisen rearrangement and RCM as key steps [21,30]. Here, we have prepared the cage dione 10 by the known route involving two atom-economic protocols such as Diels–Alder reaction and [2 + 2] photocycloaddition [42-45] (Scheme 1).

Later, the hexacyclic cage dione 10 was subjected to a Grignard reaction with comercially available allylmagnesium bromide in diethyl ether. Under these conditions, we realized the formation of hemiketal 12 in 84.7% yield instead of the expected diallylated product 11 (Scheme 2). In similar fashion, the cage dione 10 was treated with comercially available vinylmagnesium bromide and the hemiketal 13 [46,47] was obtained in 89.2% yield instead of the desired divinylated compound 14 (Scheme 2). The proximity of the carbonyl groups may be responsible for the formation of hemiketals.

The structures of both these heptacyclic hemiketals 12 and 13 have been confirmed by 1H and 13C NMR spectral data and further supported by HRMS data. Finally their structures have been unambiguousily established by single crystal X-ray diffraction studies [48] (Figure 3).

Therefore, various other reaction conditions were screened to optimize the yields. Finally, we found that the Grubbs’ first generation catalyst (G-I) in refluxing toluene gave the desired RCM product 7 in 85% yield. Along similar lines, the triallyl compound 16 gave the RCM product 17 in 66% yield (Scheme 4).

The structures of the annulated cage compounds 7 and 17 have been confirmed by 1H and 13C NMR spectral data and also supported by HRMS data with a molecular weight of 355.16 for 7 and 343.16 for compound 17, respectively. Furthermore, the structure of the bis-spiro pyrano cage compound 7 was confirmed by single crystal X-ray diffraction studies [52] (Figure 4). Fortunately, we observed that the liquid compound 16 kept at room temperature for a long time converted into a solid material. Therefore, we were keen to investigate the reason for this observation. In this context, the 1H and 13C NMR spectra of this compound were again recorded, indicating the occurence of an intramolecular DA reaction. Later, it was confirmed by single crystal X-ray diffraction studies [53] (Figure 4).

Next, the formation of compound 18 has been confirmed by an independent synthesis. To this end, triallyl compound 16 was subjected to intramolecular DA reaction in refluxing toluene to deliver the DA adduct 18 in 80% yield (Scheme 5).

Surprisingly the related system 19, prepared from 12 did not undergo DA reaction to produce the intramolecular DA adduct 20. Even under prolonged toluene reflux reaction conditions, we did not realize the formation of the required DA product 20 (Scheme 6).

In summary, we have demonstrated a new approach to intricate C2-symmetric cage bis-spirocyclic pyran derivative 7 through an allyl Grignard reaction and an RCM sequence. The strategy demonstrated here involves an atom economic process. The synthetic sequence demonstrated here opens up a new route to complex cage targets. Additionally, intramolecular DA reaction opens up a new strategy for the synthesis of highly complex cage compounds that are inaccessible by other routes. Studies to extend the scope of the intramolecular as well as intermolecular DA reaction for the synthesis of interesting cage molecules are in progress.

We thank the Department of Science and Technology (DST), New Delhi for the financial support and the Sophisticated Analytical Instrument Facility (SAIF), IIT-Bombay for recording spectral data. S.K. thanks the Department of Science and Technology for the award of a J. C. Bose fellowship. M.S. thanks IIT-Bombay for the Istitute post-doc fellowship. R.A thanks the University Grants Commission (UGC), New Delhi and G.S thanks CSIR, New Delhi for the award of a research fellowship.

© 2015 Kotha et al; licensee Beilstein-Institut.
This is an Open Access article under the terms of the Creative Commons Attribution License (http://creativecommons.org/licenses/by/2.0), which permits unrestricted use, distribution, and reproduction in any medium, provided the original work is properly cited.
The license is subject to the Beilstein Journal of Organic Chemistry terms and conditions: (http://www.beilstein-journals.org/bjoc) 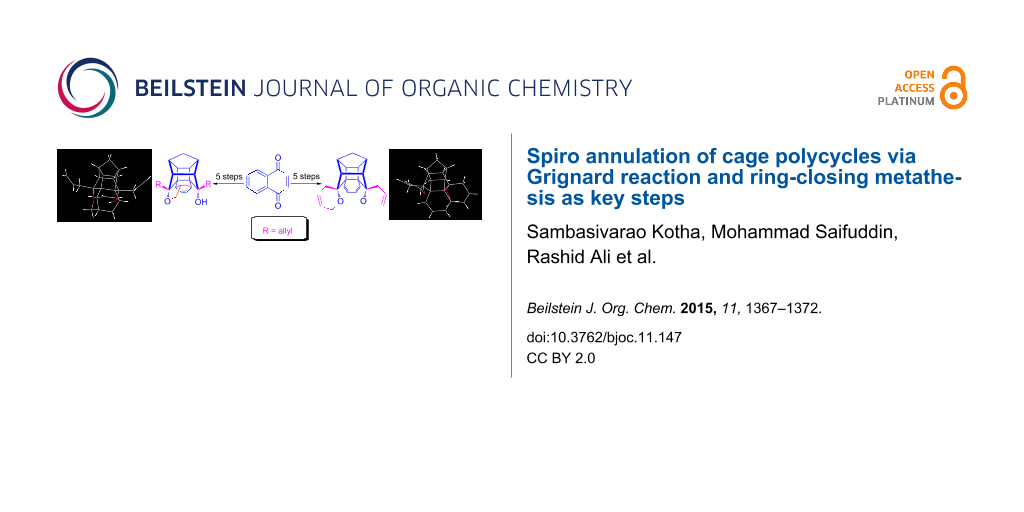