All articles from this author
Roman Mazurkiewicz


All articles from this author
Mirosława Grymel


All articles from this author
Katarzyna Zielińska


All articles from this author
Jakub Adamek


All articles from this author
Ewa Chmielewska


All articles from this author
Marta Bochno


All articles from this author
Sonia Kubica

α-Aminophosphonic and α-aminophosphinic acids, as phosphorus analogues and bioisosters of α-amino acids, exhibit a variety of important biological properties [1-3]. α-Aminobisphosphonates of general formula 1 (Figure 1, X = NHR), that can be considered as one of the most interesting subclass of α-aminophosphonic acids [1,3], are an important class of drugs that are currently successfully being used to treat osteoporosis and similar diseases, including Paget’s disease (osteitis deformans), bone metastasis (with or without hypercalcaemia), Kahler’s disease (multiple myeloma), primary hyperparathyroidism, brittle bone disease (osteogenesis imperfecta), fibrous dysplasia and others [1,4].α‑Aminobisphosphonates (Figure 1, X = NHR) and α‑hydroxybisphosphonates (Figure 1, X = OH) that can easily be obtained from α‑amino derivatives [5,6] belong to two of the most important subclasses of bisphosphonates with many successful medical applications (Table 1) [1,3,4,7-9].

The most common methods for the synthesis of 1-aminoalkylidenebisphosphonic acid derivatives consist in the consecutive formation of two Cα–P bonds between a carbon electrophile (most often an electrophilic imine intermediate) and two identical molecules of the proper phosphorus nucleophile. Another group of methods requires the formation of a Cα–N bond between an easily accessible, symmetrical, nucleophilic methylenebisphosphonic acid derivative and a nitrogen electrophile. Both groups of methods result in symmetrical products with the same phosphonyl or dialkoxyphosphonyl groups [10-18].

Up until 1989, very little was known about the preparative feasibility and biological activity of 1-phosphinylalkylphosphonates, including their most interesting 1-hydroxy and 1-amino derivatives (Figure 2, 2 and 3, respectively; R = H, Alk, Ar). In 1990, Ebetino et al. described both a contiguous and stepwise strategy for the synthesis of the pyridylaminomethane-based class of phosphinylalkylphosphonates 3 (Figure 2, R = Me or n-butyl, R1 = H, R2 = Py and its derivatives, R3, R4 = H), and discovered the bone resorption-inhibition ability of these compounds [19-21]. They also registered a number of patents relating to methods for treating or preventing diseases characterised by abnormal calcium and phosphate metabolism by utilising 1-phosphinylalkylphosphonic acid derivatives, especially their 1-amino and 1-hydroxy derivatives, and their pharmaceutical compositions [22-27].

Recently we developed a simple and effective two-step transformation of N-acyl-α-amino acids into their phosphonic analogues that allows for easy access to a variety of structurally diversified N-acyl-α-aminophosphonates 5 (Scheme 1) [36,37].

Despite the electron-withdrawing inductive effect of N-acylamino- and dialkoxyphosphonyl groups of 1-aminophosphonates 5, the electrophilicity of these compounds’ α-carbon is displayed only after functionalisation of the α-position with a nucleofuge group, e.g. by α-bromination of 1-aminophosphonates with N-bromosuccinimide [28,38-41] or by alkoxylation or aryloxylation of this position [20,29,30].

As we demonstrated, electrophilic activation of the α-carbon of 1-aminophosphonates can easily be achieved by electrochemical α-methoxylation of these compounds in methanol, mediated with NaCl (Scheme 1, Table 2). α-Methoxylations were carried out in the presence of sodium methoxide or 3-(1-piperidino)propyl-functionalised silica gel (SiO2-Pip) or without any base. The composition of the reaction mixture was controlled using 1H NMR to determine the optimal electric charge consumption. The best result of α-methoxylation of diethyl N-acetylaminomethylphosphonate (5a) was achieved without using any base, whereas the best result of the same reaction of the analogous ethylphosphonic acid derivative 5b was obtained in the presence of sodium methoxide. Attempts to carry out the analogous α-methoxylation for phosphonic derivatives of valine and phenylalanine failed, probably due to the steric hindrance exerted by a bulky substituent at the α-position.

aThe yield was estimated based on the 1H NMR spectrum of the reaction mixture relative to dimethyldiphenylsilane as the internal standard.

Attempts to carry out a Michaelis–Arbuzov-like reaction of the obtained diethyl 1-(N-acetylamino)-1-methoxyalkylphosphonates with triethyl phosphite failed due to still too low electrophilic activity of the α-carbon atom of the removed 1-methoxyalkylphosphonic acid derivatives. However, the electrophilic activity of the latter compounds was enough for their reaction with triphenylphosphine. Therefore, to enhance the electrophilic activity of the discussed 1-methoxyalkylphosphonic acid derivatives, their methoxy group was successfully displaced by the triphenylphosphonium group. Thus, heating the homogeneous mixture of diethyl 1-(N-acetylamino)-1-methoxymethylphosphonate (6a) with triphenylphosphonium tetrafluoroborate at 50 °C gave hitherto unknown phosphonium salt 7a as a resin-like compound stable at room temperature (Scheme 2). In the case of 1-(N-acetylamino)-1-methoxyethylphosphonate (6b), the analogous reaction with triphenylphosphonium tetrafluoroborate proceeded very quickly, without heating, but the resulting phosphonium salt 7b underwent slow decomposition even at low temperature (Scheme 2). The most characteristic feature of the 13C NMR spectra of these compounds was a doublet of doublets in the range of 45–58 ppm (J1 = 42–49 Hz, J2 = 151–160 Hz) assigned to the α-carbon atom coupled with two nonequivalent phosphorus atoms as well as the presence of two doublets of phosphorus atoms in the ranges of 11.7–16.5 and 28.5–37.0 ppm (J = 33–48 Hz) in the 31P NMR spectra.

General methods: IR spectra were measured on a FTIR spectrophotometer (ATR method). 1H and 13C NMR spectra were recorded at operating frequencies of 400 or 600 MHz and 100 MHz, respectively, using TMS as the resonance shift standard. 31P NMR spectra were recorded at an operating frequency of 162 MHz, with 80% orthophosphoric acid as an external resonance shift standard. All chemical shifts (δ) are reported in ppm, and coupling constants (J) are in Hz. Spectroscopic properties of all synthesized compounds as well as 1H NMR, 13C NMR and 31P NMR spectra of selected bisphosphoric acid esters are given in Supporting Information File 1.

Electrochemical α-methoxylation of diethyl 1-(N-acetylamino)alkylphosphonates 5. Procedure A: MeOH (10 mL) and diethyl 1-(N-acetylamino)alkylphosphonate 5 (0.3 mmol) were added to a glass beaker (25 mL) equipped with a cylindrical Pt mesh anode (20 cm2) and a rotating flat cathode (platinised titanium, 1.2 cm2). In the case of 1-(N-acetylamino)methylphosphonate (5a), NaCl (70 mg, 1.2 mmol) was placed in the beaker in its entirety at the beginning of oxidation, as opposed to 1-(N-acetylamino)ethylphosphonate (5b), where the mediator was added in three portions during the process (0.6 mmol at the start and 2 × 0.3 mmol – each portion after the charge of 3.0 F/mol had been passed). The beaker was placed in an ice-water bath and its content was stirred for 5 min by means of a rotating cathode before commencement of the oxidation. Electrolysis was carried out while stirring at 0.1 A until a 4.5–10 F/mol charge had passed (Table 2). After evaporation of the methanol in vacuo, the residue was extracted with CH2Cl2. Subsequent evaporation of the solvent from the extracts under reduced pressure yielded 1-(N-acetylamino)-1-methoxyalkylphosphonates 6, which were used in the next step without further purification.

Procedure B: MeOH (10 mL), diethyl 1-(N-acetylamino)alkylphosphonate 5 (0.3 mmol), and NaCl (70 mg, 1.2 mmol), in one portion for 1-(N-acetylamino)methylphosphonate (5a) or in three portions for derivative 5b (as described above for Procedure A), and SiO2-Pip (150 mg, 0.15 mmol) or MeONa (0.6 mL methanolic solution, 0.3 mmol), were added to a glass beaker (25 mL) equipped with a cylindrical Pt mesh anode (20 cm2) and a rotating flat cathode (platinised titanium, 1.2 cm2). Electrolysis was carried out while stirring at 0.1 A until a 4.5–10 F/mol charge had passed (Table 2). After evaporation of MeOH under reduced pressure, the residue was extracted with CH2Cl2 followed by further evaporation of the solvent from the extracts in vacuo to obtain diethyl 1-(N-acetylamino)-1-methoxyalkylphosphonates 6.

Synthesis of 1-(N-acetylamino)-1-triphenylphosphoniummethylphosphonate tetrafluoroborate 7a. Triphenylphosphonium tetrafluoroborate (52.5 mg, 0.15 mmol) was added to a solution of diethyl 1-(N-acetylamino)-1-methoxymethylphosphonate (6a, 36 mg, 0.15 mmol) in CH2Cl2 (1 mL). After obtaining a homogeneous solution, the solvent was evaporated to dryness and the residue was heated in a flask equipped with a septum with a needle for 20 h at 50 °C to obtain compound 7a, which was used in the subsequent synthesis without further purification.

Synthesis of 1-(N-acetylamino)-1-triphenylphosphoniumethylphosphonate tetrafluoroborate 7b. Triphenylphosphonium tetrafluoroborate (52.5 mg, 0.15 mmol) was added to a solution of diethyl 1-(N-acetylamino)-1-methoxyethylphosphonate (6b, 38 mg, 0.15 mmol) in dichloromethane (1 mL). The homogeneous mixture was stirred at room temperature for 0.1 h, and then the solvent was evaporated to dryness to give product 7b, which was used in the subsequent synthesis without further purification.

The financial help of the Ministry of Science and Higher Education of Poland (Grant No. N N204 165636) is gratefully acknowledged.

Synergistic electrodeposition of bilayer films and analysis by Raman spectroscopy

© 2015 Kuźnik et al; licensee Beilstein-Institut.
This is an Open Access article under the terms of the Creative Commons Attribution License (http://creativecommons.org/licenses/by/2.0), which permits unrestricted use, distribution, and reproduction in any medium, provided the original work is properly cited.
The license is subject to the Beilstein Journal of Organic Chemistry terms and conditions: (http://www.beilstein-journals.org/bjoc) 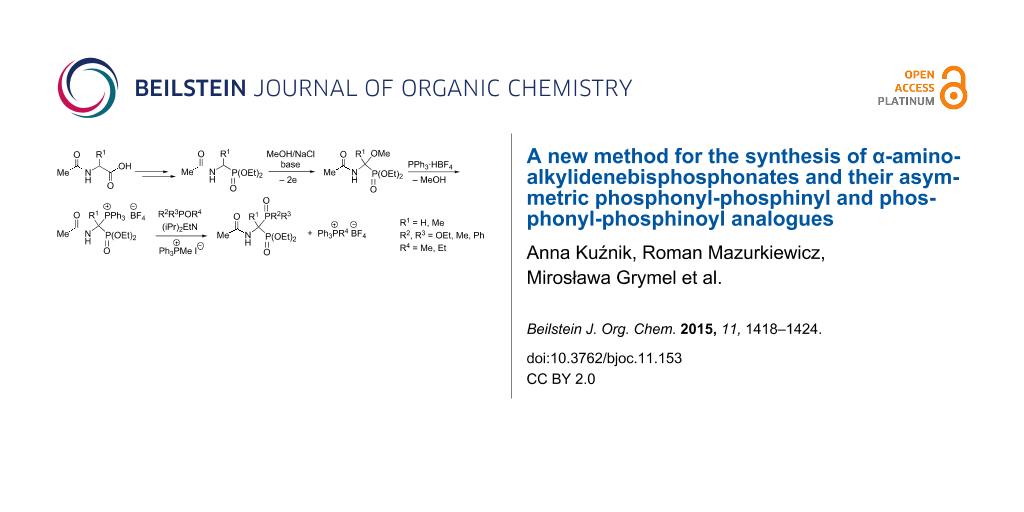