All articles from this author
Gim Yean Ang


All articles from this author
Shunsuke Chiba

We report herein studies on copper-catalyzed aerobic radical C–C bond cleavage of N–H ketimines. Treatment of N–H ketimines having an α-sp3 hybridized carbon under Cu-catalyzed aerobic reaction conditions resulted in a radical fragmentation with C–C bond cleavage to give the corresponding carbonitrile and carbon radical intermediate. This radical process has been applied for the construction of oxaspirocyclohexadienones as well as in the electrophilic cyanation of Grignard reagents with pivalonitrile as a CN source.

Alkylideneaminyl radicals (iminyl radicals) have been utilized for the synthesis of azaheterocycles through an intramolecular N–C bond formation with the unsaturated systems [1-6]. As precursors of iminyl radicals, readily available oximes and their derivatives have commonly been utilized. The generation of iminyl radicals involves the homolysis of the N–O bond with radical initiators [7-15] (Scheme 1a) or using thermal [16-20] or photoreaction conditions [21-27] (Scheme 1b). An alternative route to iminyl radicals is the single-electron reduction of oxime derivatives mediated by the appropriate lower valent transition metals [28-32], electron-rich organic electron donors [33-38], or sensitized photolysis [39-42] (Scheme 1c). Although the oxidative generation of iminyl radicals has also been reported, only iminooxyacetic acids have been used as the precursors when we started our studies on the oxidative reactions of N–H ketimines [43-49] (Scheme 1d).

Recently, we have studied the chemical reactivity of N–H ketimines towards copper-catalyzed aerobic reaction conditions [51-53]. In these studies, we employed the nucleophilic addition of Grignard reagents to carbonitriles followed by protonation as one of the methods for in situ generation of N–H ketimines, which were directly subjected to Cu-catalyzed aerobic reactions without further purification [54]. In this way, biaryl N–H ketimines generated from biaryl-2-carbonitriles were found to undergo copper-catalyzed aerobic aromatic C–H amination (Scheme 3a) [52] or 1,4-aminooxygenation (spirocyclization) (Scheme 3b) [51], affording phenanthridine derivatives and azaspirocyclohexadienones, respectively, depending on the helical sense of the biaryl axis.

Herein we report applications of the copper-catalyzed aerobic C–C bond fission of iminyl radical species for the synthesis of oxaspirocyclohexadienones as well as the electrophilic cyanation of Grignard reagents using the readily available pivalonitrile as a CN source.

We further explored the reactivity of biaryl N–H ketimines under copper-catalyzed aerobic reaction conditions, aiming at the synthesis of 6-membered azaspirocycles such as 3a’ from carbonitrile 1a having a quaternary sp3-hybridized carbon center at its α-position. The reaction of p-tolylmagnesium bromide (2a) to carbonitrile 1a proceeded smoothly in Et2O at 80 °C in a sealed tube, generating N–H ketimine 1aa after protonation with MeOH. Subsequently, Cu(OAc)2 (20 mol %), 1,10-phen (20 mol %) and DMF (to 0.1 M final concentration) were added and stirred at room temperature under an air atmosphere (Scheme 4). Interestingly, no formation of the desired 6-membered azaspirocycle 3a’ was observed, while oxaspirocyclohexadienone 3a, biaryl alkene 4a, and p-tolunitrile (5a) were isolated in 29%, 32%, and 86% yields, respectively (Scheme 4).

Oxaspirocyclohexadienone 3a was formed through C–C bond cleavage from N–H ketimine intermediate 1aa most likely via the corresponding iminyl radical, that undergoes radical fragmentation to afford the corresponding C-radical and carbonitrile 5a [55]. Thus, it is deduced that oxaspirocyclohexadienone 3a was formed through oxygenation of the putative C-radical. Moreover, in this transformation, the cyano group of carbonitrile 1a is transferred to Grignard reagent 2a to afford p-tolunitrile (5a). Considering the importance of carbonitriles in organic synthesis [56], we postulated that the cyano group transfer from simple carbonitriles onto Grignard reagents could be realized using this strategy.

A proposed reaction mechanism for the formation of oxaspirocyclohexadienone 3a, alkene 4a, and p-tolunitrile (5a) are depicted in Scheme 5. Single-electron oxidation of N–H ketimine 1aa with higher valent Cu(II) species generated under the aerobic reaction conditions forms iminyl radical species A, that undergoes β-carbon fragmentation to give p-tolunitrile (5a) and biaryl-2-isopropyl radical B (Scheme 5a). The aerobic oxygenation of C-radical B affords peroxy radical C, that is presumably reduced by Cu(I) species through the Fenton-type mechanism [57] to give alkoxy radical D [58]. Subsequent spirocyclization of the alkoxy radical D onto the benzene ring affords cyclohexadienyl radical F, oxygenation of which followed by C=O bond formation finally provides the oxaspirocyclohexadienone product 3a. Whereas, the oxidation of the benzylic radical B by the existing Cu(II) species to carbocation G and subsequent E1-type elimination of a proton provides biaryl alkene 4a (Scheme 5b). The presence of alkoxy radical D in the reaction process could be further supported by the reaction of biaryl hydroperoxide 6, which could be converted into the alkoxy radical D under copper-catalyzed aerobic reaction conditions [58]. Indeed treatment of hydroperoxide 6 under the standard reaction conditions afforded 3a in 24% yield along with biaryl alcohol 7 in 25% yield (Scheme 5c).

While formation of biaryl alkene 4a could not be avoided at this moment, it is still appealing to probe the potential utility of the current transformation toward the synthesis of oxaspirocyclohexadienones 3. Therefore, the reactions of carbonitriles 1b–d were examined under the current best reaction conditions (Table 1, entry 8) using p-tolyl Grignard reagent 2a (Table 2). Carbonitrile 1b, having methyl groups in ortho-positions on both aryl rings of the biaryl moiety, underwent the C–C bond fission process smoothly to afford oxaspirocyclized product 3b and biaryl alkene 4b in 48% and 35% yields, respectively, along with p-tolunitrile (5a) in 90% yield (Table 2, entry 1). The reactions of N–H ketimines having cyclopentyl and tetrahydropyranyl rings derived from nitriles 1c and 1d, respectively, afforded tricyclic oxaspirocyclohexadienones 3c and 3d in moderate yields along with the corresponding alkenes 4c and 4d as well as p-tolunitrile (5a) (Table 2, entries 2 and 3).

On the other hand, the reaction starting from carbonitrile 1e having a strained cyclobutane ring did not form the desired oxaspirocyclohexadienone (Scheme 6). Instead, γ-bromoketone 8e was isolated in 44% yield along with nitrile 5a in 80% yield. The formation of γ-bromoketone 8e is most likely caused by radical ring opening from the transient cyclobutoxy radical I, which is driven by releasing ring strain of the cyclobutyl ring. The resulting γ-keto radical J subsequently undergoes radical bromination to form 8e [59]. This result unambiguously supports the presence of the alkoxy radical intermediate during oxaspirocyclohexadienone formation in our mechanistic proposal.

Next, we turned our attention to apply the present copper-catalyzed aerobic C–C bond fission process in the electrophilic cyanation of Grignard reagents. As carbonitriles are omnipresent components in various natural products, dyes and potent pharmaceutical drugs [60-62], new and versatile routes towards this substance class are always desirable. Conventional methods to install the cyano group on aryl rings such as the Rosenmund–von Braun reaction [63] or the Sandmeyer reaction [64] require the use of stoichiometric amounts of toxic metal cyanides (such as CuCN) as the “CN” anion source [65]. Therefore, an employment of aliphatic carbonitriles which are less toxic and easier to handle (such as acetonitrile [66-70], benzyl cyanide [71-76], and malononitrile [77,78]) for the “CN” surrogates has been developed more recently [79]. We envisioned that the readily available pivalonitrile (1f) could be a potential CN source for the electrophilic cyanation [80-86] of Grignard reagents using the present protocol (Scheme 7).

Thus pivalonitrile (1f) was reacted with 2-naphthylmagnesium bromide (2b) for formation of the corresponding N–H ketimine 1fb, which was subsequently treated with 10 mol % of Cu(OAc)2 under an O2 atmosphere (Scheme 8). As expected, formation of 2-naphthonitrile (5b) was observed in 79% yield. On the other hand, the reaction in the absence of O2 (under an Ar atmosphere) provided only 2-pivaloylnaphthalene (9b) in 83% yield formed through hydrolysis of unreacted N–H imine 1fb during the aqueous work-up. Therefore molecular oxygen is indispensable to achieve the present cyanation through the C–C bond cleavage of the N–H ketimine. It was found that use of CuBr2 as the catalyst resulted in formation of 5b in higher yield (86%).

In summary, we have demonstrated a copper-catalyzed aerobic generation of iminyl radicals from the corresponding N–H ketimines and their radical C–C bond fission. These processes could be applied for synthesis of oxaspirocyclohexadienones through spirocylization of the transient alkoxy radicals generated by aerobic oxygenation of the resulting carbon radicals. With the present protocol, the electrophilic cyanation of Grignard reagents was also established using readily available pivalonitrile as a simple CN source.

This work was supported by funding from Nanyang Technological University and Singapore Ministry of Education (Academic Research Fund Tier 2: MOE2012-T2-1-014).

Pei Chui Too, Ya Lin Tnay and Shunsuke Chiba

© 2015 Tnay et al; licensee Beilstein-Institut.
This is an Open Access article under the terms of the Creative Commons Attribution License (http://creativecommons.org/licenses/by/2.0), which permits unrestricted use, distribution, and reproduction in any medium, provided the original work is properly cited.
The license is subject to the Beilstein Journal of Organic Chemistry terms and conditions: (http://www.beilstein-journals.org/bjoc) 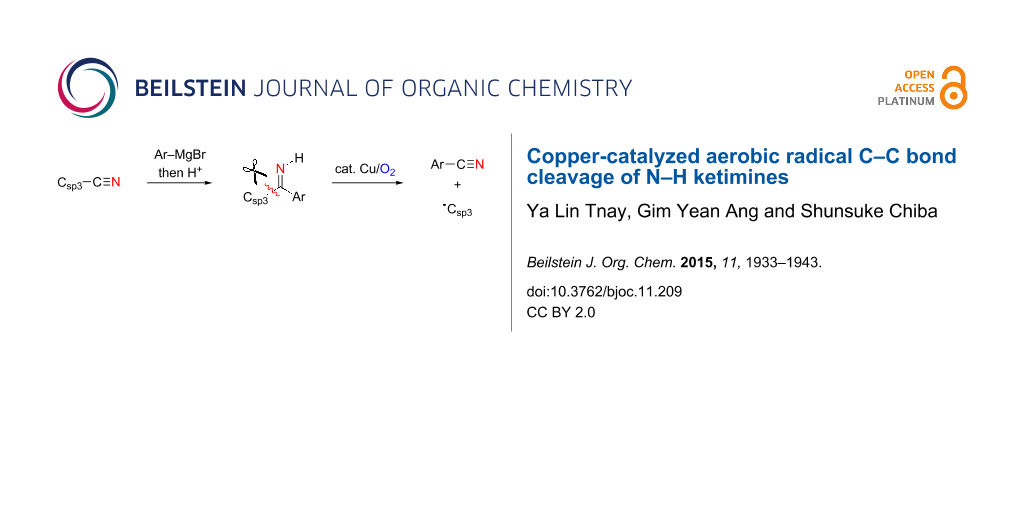