The growth in copper-catalyzed organic reactions is driven by a couple of factors. First, copper chemistry is incredibly diverse. Depending on its oxidation state, this metal can efficiently catalyze reactions involving both one and two-electron mechanisms. Copper coordinates easily to heteroatoms and to π-bonds and is well-known to activate terminal alkynes. The Ullman and Goldberg C–C and C–N cross-coupling reactions were discovered over a century ago and their development has really blossomed over the past twenty years. Second, copper is an earth-abundant metal, making its use more cost effective and more sustainable than precious transition metal catalysts. It is clear from the impact copper catalysis has had on organic synthesis that copper should be considered a first line catalyst for many organic reactions. Further growth in the field is anticipated in the years to come.

A new approach to ferrocene derived alkenes via copper-catalyzed olefination

C–H bond halogenation catalyzed or mediated by copper: an overview

Synthesis of bi- and bis-1,2,3-triazoles by copper-catalyzed Huisgen cycloaddition: A family of valuable products by click chemistry 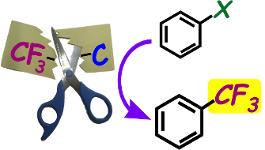