A new approach to ferrocene derived alkenes via copper-catalyzed olefination


All articles from this author
Aleksei V. Shastin


All articles from this author
Alexandra D. Demidovich


All articles from this author
Abel M. Magerramov


All articles from this author
Victor N. Khrustalev


All articles from this author
Rustem D. Rakhimov


All articles from this author
Sergey Z. Vatsadze


All articles from this author
Valentine G. Nenajdenko

A new approach to ferrocenyl haloalkenes and bis-alkenes was elaborated. The key procedure involves copper catalyzed olefination of N-unsubstituted hydrazones, obtained from ferrocene-containing carbonyl compounds and hydrazine, with polyhaloalkanes. The procedure is simple, cheap and could be applied for the utilization of environmentally harmful polyhalocarbons. The cyclic voltammetry study of the representative examples of the synthesized ferrocenyl alkenes shows the strong dependence of the cathodic behavior on the amount of vinyl groups: while for the monoalkene containing molecules no reduction is seen, the divinyl products are reduced in several steps.

The introduction of complex functional fragments into the specified place of the target molecule is of current interest in modern synthetic chemistry [1]. From this point of view, the development of ferrocene-based molecules as crucial fragments of new materials and novel pharmacological entities is of great importance. Indeed, since the discovery of ferrocene [2] and the synthesis of the first polymer based on vinylferrocene [3], the chemistry of ferrocene and its derivatives is developing very rapidly. Ferrocene derivatives are widely applied in industry, for example, diethylferrocene is a combustion accelerator used as additive to gasoline [4]. There are many drugs containing a ferrocene fragment in their structures (Scheme 1) [5]. The ferrocene core is also a very popular scaffold for ligand design, particularly, in asymmetric catalysis (Scheme 1).

Probably, the most challenging application of ferrocenes is the production of ferrocene-containing polymers [6-8] (Scheme 2). The polymers have a set of unique properties and are used in various fields of science, technology and medicine (conducting and semiconducting materials [9], drugs [10], biosensors [11-13], liquid crystal materials [14,15], coordination polymers [16], and more [10]).

A few years ago we discovered a new reaction for a double carbon–carbon bond formation – the reaction of catalytic olefination. It was shown that the copper-catalyzed reaction of unsubstituted hydrazones of aromatic (aliphatic) aldehydes and ketones with a wide range of polyhalogenalkanes leads to the corresponding substituted ethylenes with one or two geminal halogen atoms [32-36]. In the present study, we investigated the possibility of using a catalytic olefination reaction for the synthesis of ferrocene derivatives. As a result, several well-known and previously unknown ferrocene-containing alkene compounds were obtained.

First, ferrocene carbaldehyde was investigated. It was found, that under usual conditions of the reaction (equal amount of N2H4·H2O, DMSO or EtOH as a solvent) the yields of the desired alkenes were not good enough. Better results were obtained in ethylene glycol with a 4-fold excess of N2H4·H2O (novel media just reported for COR [37]). In this case, target alkenes were isolated in up to 62% yield. Using C2-freons fluorinated alkenes 3–5 were synthesized (Scheme 3). The reaction proceeds stereoselectively to give a mixture of isomers in which the less hindered Z-isomer dominates. The assignment of the isomers was easily performed by comparison of NMR spectral data with those previously reported for the Z,E-isomers of similar alkenes [38-40]. The trifluoromethyl group of the Z-isomers of compounds 3–5 resonates in higher field in 19F NMR (3: −72.8 ppm, 4: −67.1 ppm, 5: −69.0 ppm) than that of the E-isomers (3: −67.9 ppm, 4: −60.2 ppm, 5: −62.4 ppm). In the case of compound 3 an additional conformation can be seen in the 1H NMR spectrum. It is well-known, that 2JHF coupling constants in alkenes with relative trans-configuration of hydrogen and fluorine atoms are usually approximately twice bigger than the corresponding coupling constants in alkenes with cis-configuration. The values found in 3 are 36.5 Hz (Z-isomer by systematic nomenclature, but trans-configuration of H and F) and 16.2 Hz (E-isomer).

Acetylferrocene and 1,1’-diacetylferrocene were also involved successfully into this transformation (Scheme 4). Our preliminary study of the catalytic olefination of acetylferrocene by CF3CBr3 (alkene 8) and CBr4 (alkene 7) indicates, that in contrast to ferrocene carbaldehyde, better results were achieved in DMSO using previously prepared hydrazones [37]. A series of ferrocene derivatives including fluorinated ones was prepared in good yields. Unsymmetrical alkenes 8 and 9 were obtained as a mixture of isomers in approximately equal amounts. Identification of the structures of the E- and Z-isomers of alkene 8 was accurately performed by an X-ray crystallographic study using crystals of 8 obtained from ethanol solution (see Supporting Information File 1 and [41]). Due to the presence of two double bonds in alkene 12 the formation of three isomers (Z,Z, Z,E and E,E) is possible. Similar to alkenes 8 and 9 no stereoselectivity is observed to give equal numbers of cis- and trans-double bonds in the obtained molecules. As a result a 25:50:25 mixture of Z,Z, Z,E and E,E was formed. The higher quantity of the Z,E-isomer is a result of statistical doubling (in fact, the reaction gives Z,E and E,Z-alkenes which are identical).

The ferrocene unit possesses several exciting electrochemical characteristics, such as fast electron-transfer rate, low oxidation potential, and stability of two redox states. The combination of a ferrocene and an alkene moiety in one molecule might be of interest for the synthesis of functional devises that can be exploited in electrocatalysis, electroanalysis, and biosensing applications, since the alkene fragment could be used to graft the molecule to the polymer support or to copolymerize it with the appropriate monomers. Therefore, we have also examined the electrochemical properties of the compounds obtained. It was shown that the oxidation of the ferrocene unit proceeds in accordance to the data found in literature, whereas the reduction was found only in the case of bis(halovinyl)ferrocenes. Our results clearly indicate that the anodic and cathodic electrochemical processes proceed on different parts of the molecules. While in the anodic region the changes are localized on the iron atom, the electron transfer from the cathode occurs at a double bond.

Three representative groups of halovinylferrocenes were studied using cyclic voltammetry (Table 1). The first group was formed from three omega-dichloro derivatives 1, 6, and 10. The second one was made from three omega-dibromo products 2, 7, and 11, and the last group consisted of bromotrifluoromethyl molecules 4, 8, and 12. Such selection allowed us to estimate the effect of the nature of substituent on the electrochemical behavior of the molecule.

aIn the case of a reversible peak the reverse potentials are shown in paranthesis. bIR means irreversible.

All compounds are characterized by reversible oxidation waves in the range of 0.64–0.84 V that corresponds to the Fe2+/Fe3+ redox transformation. The values of the respective oxidation potential depend mainly on the amount of the vinyl groups attached to the ferrocene core. There is also the effect of the halogen atom, though to a lesser extent compared to the effect of the amount of vinyl groups. For example, all dichloro and dibromo compounds (1, 2, 6, and 7, one vinyl fragment) are oxidized at potentials of 0.64–0.65 V, whereas for the corresponding tetrahalo compounds (10 and 11, two vinyl fragments) these values are shifted to more anodic potentials, namely, 0.74 V. The same is true for trifluoromethyl ferrocenes 4, 8, and 12 (Figure 1).

The processes behind the cathodic waves are not totally clear at the moment, but we assume that the radical-ions formed after the first electron transfer would enter the intramolecular cyclization reaction involving the second adjacent double bond with subsequent electropolymerization. The latter is confirmed by a pronounced decrease in current values (3–4 times) as compared to current values of oxidation at the iron atom. These findings allow us to state that the synthesized molecules are promising starting materials for the electrochemical synthesis of ferrocene-containing conjugated polymers.

In conclusion, a novel stereoselective route to ferrocenyl haloalkenes and bis-alkenes was elaborated on the basis of a catalytic olefination reaction of N-unsubstituted hydrazones obtained from ferrocene-containing aldehydes and ketones. Electrochemical properties of synthesized alkenes were investigated and promising electrochemical characteristics were demonstrated.

This work was supported by the Russian Foundation for the Basic Research (Grants no 13-03-01129-a and 14-03-91160-GFEN, investigation of electrochemical properties of halovinylferrocenes) and the Russian Science Foundation (grant no. 14-13-00083, synthesis of starting materials and halovinylferrocenes). The authors acknowledge partial support in measuring of NMR from the M.V. Lomonosov Moscow State University Program of Development.

© 2015 Muzalevskiy et al; licensee Beilstein-Institut.
This is an Open Access article under the terms of the Creative Commons Attribution License (http://creativecommons.org/licenses/by/2.0), which permits unrestricted use, distribution, and reproduction in any medium, provided the original work is properly cited.
The license is subject to the Beilstein Journal of Organic Chemistry terms and conditions: (http://www.beilstein-journals.org/bjoc) 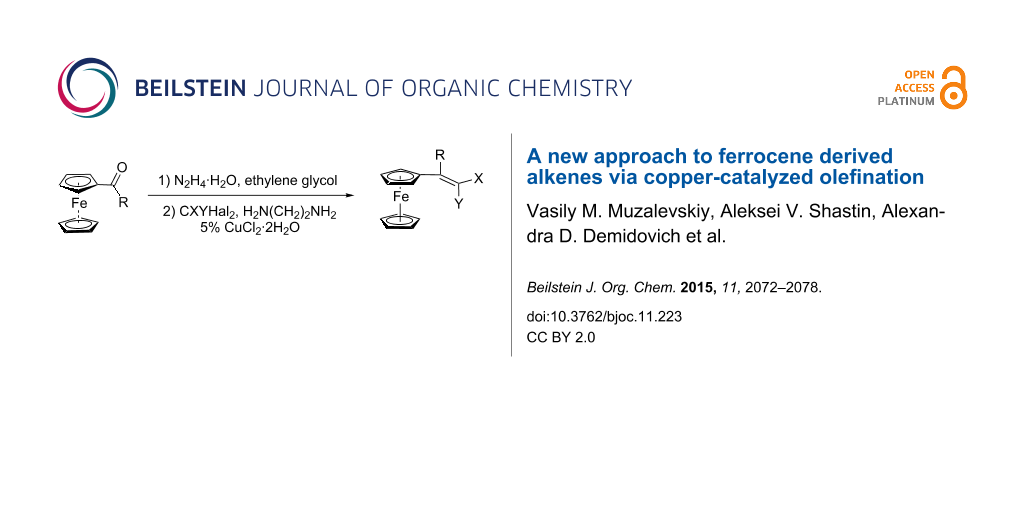