All articles from this author
Yumi Hirai


All articles from this author
Rena Nishiyama


All articles from this author
Yuki Maeda


All articles from this author
Taishi Higashi


All articles from this author
Yoichi Ishitsuka


All articles from this author
Yuki Kondo


All articles from this author
Tetsumi Irie


All articles from this author
Takumi Era


All articles from this author
Hidetoshi Arima

The Niemann–Pick type C disease (NPC) is one of inherited lysosomal storage disorders, emerges the accumulation of unesterified cholesterol in endolysosomes. Currently, 2-hydroxypropyl-β-cyclodextrin (HP-β-CyD) has been applied for the treatment of NPC. HP-β-CyD improved hepatosplenomegaly in NPC patients, however, a high dose of HP-β-CyD was necessary. Therefore, the decrease in dose by actively targeted-β-CyD to hepatocytes is expected. In the present study, to deliver β-CyD selectively to hepatocytes, we newly fabricated mono-lactose-appended β-CyD (Lac-β-CyD) and evaluated its cholesterol lowering effects in NPC-like HepG2 cells, cholesterol accumulated HepG2 cells induced by treatment with U18666A. Lac-β-CyD (degree of substitution of lactose (DSL) 1) significantly decreased the intracellular cholesterol content in a concentration-dependent manner. TRITC-Lac-β-CyD was associated with NPC-like HepG2 cells higher than TRITC-β-CyD. In addition, TRITC-Lac-β-CyD was partially localized with endolysosomes after endocytosis. Thus, Lac-β-CyD entered NPC-like HepG2 cells via asialoglycoprotein receptor (ASGPR)-mediated endocytosis and decreased the accumulation of intracellular cholesterol in NPC-like HepG2 cells. These results suggest that Lac-β-CyD may have the potential as a drug for the treatment of hepatosplenomegaly in NPC disease.

Cyclodextrins (CyDs) are non-reducing cyclic glucose oligosaccharides obtained by enzymatic means from starch-containing raw materials and have been used for the enhancement of drugs solubility, stability and bioavailability, etc., through complex formation [5,6]. Recently, 2-hydroxypropyl-β-cyclodextrin (HP-β-CyD) has attracted considerable attention for the treatment of NPC disease [4,7-9]. The administration of HP-β-CyD to NPC1-knock out (Npc1−/−) mice has been reported to remarkably prolong the life span of the mice through a reduction in cholesterol levels [7-9]. Most recently, it was reported that HP-γ-CyD, which has great advantages in biocompatibility compared to HP-β-CyD, can also reduce the cholesterol accumulation in NPC-like cells [10]. However, a high dose of HP-β-CyD or HP-γ-CyD was necessary to exert the pharmacological effects in vivo, since neither HP-β-CyD nor HP-γ-CyD enters cells effectively due to their hydrophilicity and high molecular weight.

Receptor-mediated endocytosis is an attractive approach to enhance the cellular uptake of drugs in target cells. It enables not only high drug concentrations within the cells but also minimum concentration at non-target cells, thereby amalgamating high treatment efficacy with low side effects. Of various receptors, asialoglycoprotein receptors (ASGPR) expressing in abundance on hepatocytes could provide advantages for hepatocyte-selective delivery [11]. Actually, the galactosylation of polymers or lipids has been utilized to develop drug carriers with hepatocyte specificity through ASGPR [11]. Therefore, ASGPR-mediated endocytosis seems to be a promising approach to deliver CyDs to hepatocytes for the treatment of hepatosplenomegaly in NPC disease. Therefore, in the present study, we newly fabricated mono-lactose-appended β-CyD (Lac-β-CyD) and evaluated its cholesterol lowering effect in NPC-like HepG2 cells, cholesterol accumulated HepG2 cells induced by U18666A, as a model of NPC hepatocytes.

In the present study, we attempted to prepare Lac-β-CyD as a hepatocyte-selective cholesterol decreasing agent. Figure 1 shows the preparation pathway of Lac-β-CyD. Firstly, we synthesized NH2-β-CyD through tosylation, and azidation of primary hydroxy groups of β-CyD, as reported previously [12,13]. Secondly, lactose was modified to NH2-β-CyD using the reducing agent cyanotrihydroborate in dimethyl sulfoxide (DMSO) at room temperature for 24 h. No unreacted free lactose was confirmed by thin-layer chromatography (TLC). The MALDI–TOF MS spectrum of Lac-β-CyD showed a peak at m/z 1483 derived from lactose mono-substituted β-CyD (Figure 2A). There are undesired signals with high molecular weight. Therefore, further elaborate studies are necessary. From the integral values of the anomeric protons of lactose and anomeric protons of glucose in β-CyD obtained by 1H NMR analysis (Figure 2B), the degree of substitution of lactose (DSL) was calculated as 1. These results suggest that Lac-β-CyD (DSL1) was almost successfully fabricated.

It is well known that β-CyDs destroy caveolae structures and concomitantly affected various cellular functions through cholesterol depletion [14,15]. In NPC treatment, the interaction of Lac-β-CyD with cholesterol is thought to play a critical role. However, chemical modification of CyDs may often change the inclusion ability to guest molecules. Therefore, to examine whether Lac-β-CyD has inclusion ability or not, we preliminary determined the dissociation constant of Lac-β-CyD with adamantane, which is often used as a guest molecule for β-CyD, using the quartz crystal microbalance method (QCM) in phosphate-buffered saline (PBS, pH 7.4) at 37 °C. As a result, the dissociation constant of Lac-β-CyD with adamantane was 9.8 × 10−7 M due to the potent complex formation. Therefore, this preliminary result suggests that the inclusion ability of Lac-β-CyD is still maintained.

To reveal the cytotoxicity of Lac-β-CyD, we examined the WST-1 method (Figure 3). Here, we used U18666A-treated HepG2 cells as NPC-like cells, because U18666A inhibits an intracellular cholesterol trafficking and has the potential to induce NPC disease phenotype [16]. No significant cytotoxicity of Lac-β-CyD was observed in U18666A-treated HepG2 cells at 1 mM for 24 h. The following studies were performed under the experimental conditions.

To reveal whether Lac-β-CyD can associate with ASGPR-expressing cells, we examined the cellular uptake of tetramethylrhodamine isothiocyanate (TRITC)-labeled Lac-β-CyD after treatment for 24 h in U18666A-treated HepG2 and NPC-like ASGPR-expressing cells, by a flow cytometric analysis (Figure 4). As a result, TRITC-Lac-β-CyD was found to be associated with U18666A-treated HepG2 cells, higher than TRITC-β-CyD, which is lacking the lactose moiety (Figure 4A,B).

We examined the effects of Lac-β-CyD on cholesterol levels in U18666A-treated HepG2 cells using Filipin III, which can bind to unesterified cholesterol specifically. After treatment with 0.01 mM, 0.1 mM and 1 mM Lac-β-CyD for 24 h, the fluorescence intensity of Filipin III was detected by a fluorescence microscope (Figure 6). Herein, the experimental conditions of the treatment with 1 mM β-CyDs for 24 h are reported to decrease cholesterol in endolysosomes in NPC model cells [17,18]. As shown in Figure 6, the treatment with Lac-β-CyD for 24 h decreased the fluorescence intensity derived from Filipin III in a concentration-dependent manner. Taken together, these results suggest that Lac-β-CyD reduced the cholesterol levels in U18666A-treated HepG2 cells through ASGPR-mediated endocytosis.

Autophagy, a bulk digestion system of cytoplasmic aggregated proteins and organelles, plays an important role in regulating NPC disease [21-24]. In NPC disease, accumulation of autophagosomes has elicited even in the basal conditions [25,26]. Therefore, amelioration of impaired autophagy is necessary for the treatment of the NPC disease. Actually, Song et al. demonstrated that HP-β-CyD activated the transcription factor EB, a master regulator of lysosomal function and autophagy, and ameliorated the autophagic function in cells [27]. In addition, Tamura et al. reported that HP-β-CyD elevated LC3-II and p62 levels in NPC1 fibroblasts, indicating the improvement of impaired autophagy by HP-β-CyD [28]. Therefore, it is necessary to investigate whether Lac-β-CyD can improve an autophagy function in NPC-like cells.

Galactose density is one of the critical parameters of affinity to ASGPR. The binding affinity of galactose with ASGPR enhanced 100–1000 fold from mono- to triantennary galactose structure due to cluster effects [29]. Stokmaier et al. reported that the dissociation constant of monosaccharide with ASGPR was 10−4 M, while those of triantennary and tetraantennary with ASGPR were 5 × 10−9 M and 9 × 10−9 M, respectively [29]. Therefore, to provide the more potent recognition ability of Lac-β-CyD to ASGPR, we are preparing the multi-lactose-appended β-CyDs.

Nuclear magnetic resonance (NMR) spectra were taken on a JEOL JNM-R 500 instrument (Tokyo, Japan), operating at 500 MHz for protons at 25 °C. The concentration of the sample was 1.5 mg/750 μL in deuterated oxide (D2O), and the chemical shifts were given as parts per million (ppm) downfield from that of tetramethylsilane (TMS). MALDI-TOF mass spectra (MALDI–TOF MS) were measured in a positive mode at 25 °C by a JEOL JMS-DX 303 mass spectrometer (Tokyo, Japan).

TRITC was attached to the primary hydroxy group of Lac-β-CyD, i.e., Lac-β-CyD (10 mg) and TRITC (1 mg) were dissolved in 400 μL of DMSO and mixed at room temperature for 24 h under the protection from light. Then, the sample was gradually dropped into 50 mL of acetone. After centrifugation (10,000 rpm, 10 min), the precipitant was collected and dissolved with water. The sample was lyophilized to obtain TRITC-Lac-β-CyD.

HepG2 cells, a human hepatocellular carcinoma cell line, were obtained from Riken Bioresource Center (Tsukuba, Japan). HepG2 cells were grown in DMEM, containing 1 × 105 mU/mL of penicillin, 0.1 mg/mL of streptomycin supplemented with 7.5%, 10% and 10% FBS, respectively, at 37 °C in a humidified 5% CO2 and 95% air atmosphere. NPC-like HepG2 cells, which accumulate the cholesterol and sphingolipids in cells, were prepared by the treatment with DMEM containing 1.25 μM U18666A for 48 h.

Cellular association of Lac-β-CyD was determined by a flow cytometry. After incubation with TRITC-Lac-β-CyD for 1 h in U18666A-treated HepG2 cells, the cells were washed with PBS (pH 7.4) twice and immediately scraped with 1 mL of PBS (pH 7.4). The cells were collected and filtered through nylon mesh. Data were collected for 1 × 104 cells on a FACSCalibur flow cytometer using CellQuest software (Becton-Dickinson, Mountain View, CA).

U18666A-treated HepG2 cells (5 × 104 cells/35 mm glass bottom dish) were incubated with 150 μL of DMEM containing 100 μM TRITC-β-CyDs for 24 h. After washing with PBS, 150 μL of LysoTracker® (final concentration: 100 nM) was added and further incubated for 1 h. After the cells were washed, the fluorescence derived from TRITC and LysoTracker® in U18666A-treated HepG2 cells was detected by confocal laser scanning microscopy. The fluorescence intensities were determined by a BZ-II analyzer (Keyence, Osaka, Japan).

U18666A-treated HepG2 cells (5 × 104 cells/35 mm glass bottom dish) were incubated with 150 μL of DMEM containing Lac-β-CyD (0.01, 0.1, or 1 mM) for 24 h. After washing with PBS, intracellular cholesterol was detected by a cholesterol cell-based detection assay kit (Cayman Chemical Company, Ann Arbor, MI). Briefly, after fixation of the cell by treatment with 150 μL of cell-based assay fixative solution (4% formaldehyde), 150 μL of cholesterol detection assay buffer containing 50 μg/mL of Filipin III was added and further incubated at 37 °C for 1 h. After the cells were washed, the fluorescence derived from Filipin III in U18666A-treated HepG2 cells was detected by a KEYENCE Biozero BZ-8000, a fluorescence microscope. The fluorescence intensities were determined by a BZ-II analyzer (Keyence, Osaka, Japan).

The experimental results are shown as means ± S.E.M. Significance levels for comparisons between samples were determined with Scheffe's test. The level of statistical significance was set at p < 0.05.

This work was funded by the Ministry of Health Labor and Welfare of Japan.

© 2015 Motoyama et al; licensee Beilstein-Institut.
This is an Open Access article under the terms of the Creative Commons Attribution License (http://creativecommons.org/licenses/by/2.0), which permits unrestricted use, distribution, and reproduction in any medium, provided the original work is properly cited.
The license is subject to the Beilstein Journal of Organic Chemistry terms and conditions: (http://www.beilstein-journals.org/bjoc) 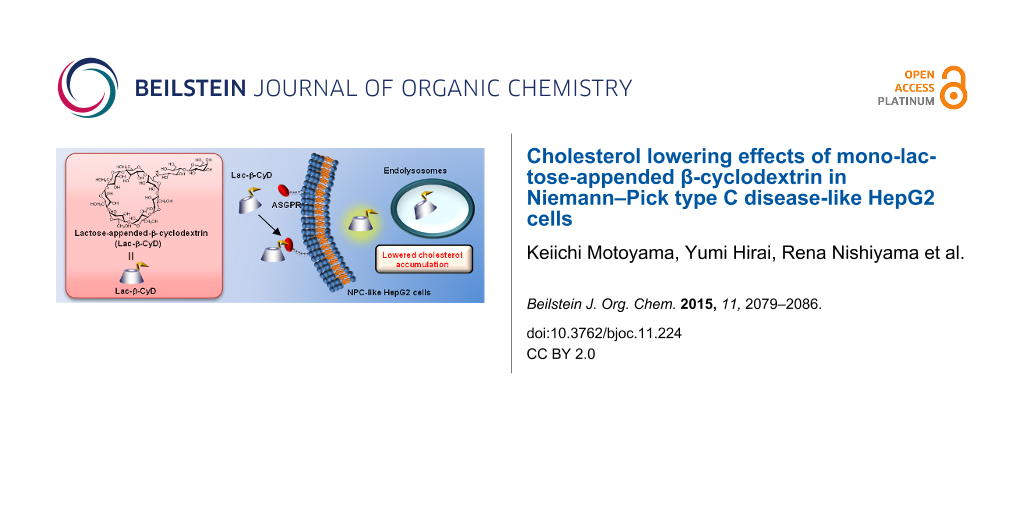