Copper is a very versatile transition metal that has been used as a building material by human civilizations for over 6000 years. Copper is also an essential element, responsible for important biological processes. The title of this Thematic Series published in the Beilstein Journal of Organic Chemistry is “Copper catalysis in organic synthesis”. A web of scienceTM topic search of “copper-catalyzed synthesis” indicated over 500 papers had been published in 2014. In point of fact, there has been a steady increase in publications on this topic since 1988. In the late 1980’s and early 1990’s, the topics centered on copper nitrene reactivity (e.g., aziridination), copper carbene chemistry, conjugate additions and cross-coupling reactions. Some of the most highly cited papers of all time on this topic are reviews on conjugate addition, cross-coupling, and [3 + 2] “Click” reaction applied to bioconjugation.

The growth in copper-catalyzed organic reactions may be driven by a couple of factors. First, copper chemistry is incredibly diverse. Depending on its oxidation state, this metal can efficiently catalyze reactions involving both one and two-electron (radical and polar) mechanisms, or both. Copper coordinates easily to heteroatoms and to π-bonds and is well-known to activate terminal alkynes. The Ullman and Goldberg C–C and C–N cross-coupling reactions were discovered over a century ago and their development has really blossomed over the past twenty years. Second, copper is an earth-abundant metal, making its use more cost effective and more sustainable than precious transition metal catalysts.

I am grateful to the contributors and the reviewers who participated in the production of this Thematic Series. It is clear from the impact copper catalysis has had on organic synthesis that copper should be considered a first line catalyst for many organic reactions. I anticipate further growth in the field in the years to come.

Design and synthesis of diazine-based panobinostat analogues for HDAC8 inhibition

© 2015 Chemler; licensee Beilstein-Institut.
This is an Open Access article under the terms of the Creative Commons Attribution License (http://creativecommons.org/licenses/by/2.0), which permits unrestricted use, distribution, and reproduction in any medium, provided the original work is properly cited.
The license is subject to the Beilstein Journal of Organic Chemistry terms and conditions: (http://www.beilstein-journals.org/bjoc) 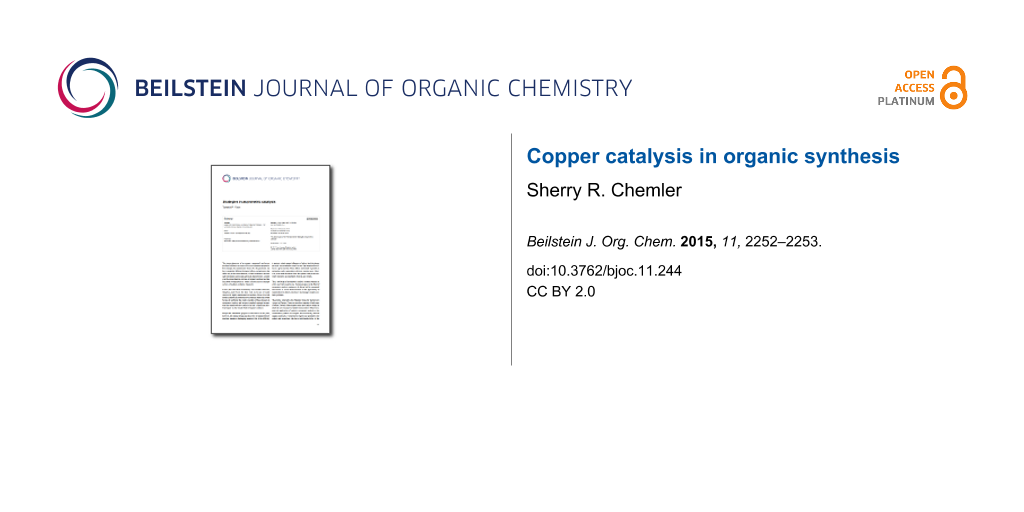