All articles from this author
Caterina Carnovale


All articles from this author
Salvatore V. Giofrè


All articles from this author
Maria A. Chiacchio


All articles from this author
Adriana Garozzo


All articles from this author
Emanuele Amata


All articles from this author
Giovanni Romeo


All articles from this author
Ugo Chiacchio

A novel series of 2’-oxa-3’-aza-4’a-carbanucleosides, featured with a triazole linker at the 5’-position, has been developed by exploiting a click chemistry reaction of 5’-azido-2’-oxa-3’-aza-4’a-carbanucleosides with substituted alkynes. Biological tests indicate an antitumor activity for the synthesized compounds: most of them inhibit cell proliferation of Vero, BS-C-1, HEp-2, MDCK, and HFF cells with a CC50 in the range of 5.0–40 μM. The synthesized compounds do not show any antiviral activity.

Synthetic modified nucleosides are of great interest as potential new lead structures in particular as antiviral or anticancer agents [1-8]. As analogues these compounds can interfere in nucleic acid synthesis or block nucleosides- and/or nucleotide-dependent biological processes by mimicking natural nucleosides and serving as inhibitors or building units [9-12]. Many structural variations of the natural nucleosides have been exploited. In general, the performed modifications included the replacement of the furanose moiety by other carbon or heterocyclic systems [13,14] or even acyclic fragments [15,16], the substitution of pyrimidine or purine natural nucleobases with unnaturally-substituted heteroaromatics or homoaromatic systems, or the modification of the phosphate P(O)–O–C bond with the non–hydrolyzable phosphonate P(O)–C linkage [17,18].

In this context, nucleoside analogues, where different carbon or heterocyclic systems replace the furanose ring, have been reported as anticancer or antiviral agents [19,20]. In particular, 2’-oxa-3’-aza-4’a-carbanucleosides 1–4, characterized by the presence of an isoxazolidine ring, represent a scaffold of modified dideoxynucleosides endowed with interesting physiological features (Figure 1) [21-27].

2’-Oxa-3’-aza-4’a-carbanucleosides 1–4 can be considered as mimics of natural nucleosides and act as terminators of the viral DNA chain. Their antiviral activity is linked to the competitive reversible inhibition of the reverse transcriptase. Furthermore, as antimetabolites, they can interact with intracellular targets to induce cytotoxicity [28-32].

Several functionalities have been inserted as linkers on the 2’-oxa-3’-aza-4’a-carbanucleoside skeleton in order to confer novel mechanisms of action for nucleoside mimics: in this context, the 1,2,3-triazole unit assumes particular interest according to its easily access and the well-known biological activity of many derivatives. In these last years, in fact, triazoles have gained considerable attention in medicinal chemistry, bioconjugation, drug-delivery, and materials science [33-38]. Moreover, the 1,2,3-triazole motif is exceedingly stable to basic or acidic hydrolysis and interacts strongly with biological targets through hydrogen bonding to nitrogen atoms as well as through dipole–dipole and π-stacking interactions [39].

Recently, a synthetic approach towards 3-hydroxymethyl-5-(1H-1,2,3-triazol)-isoxazolidines 5 has been described [40]: the obtained compounds inhibit the growth of anaplastic and follicular human thyroid cancer cell lines, with IC50 values in the range of 3.87–8.76 μM. In the same context, novel 1,2,3-triazole-appended 2’-oxa-3’-azanucleoside analogs 6 were developed [41]: Some of these compounds show a good anticancer activity against the anaplastic (8305C) and the follicular (FTC-133) human thyroid cancer cell lines, and especially on the U87MG human primary glioblastoma cell line (Figure 2).

Accordingly, considering that the incorporation of the triazole moiety can lead to interesting biological properties, we report in this paper the preparation of a small library of nucleoside analogues 7 (Figure 2), where the furanose ring is substituted by an isoxazolidine system and a triazole unit replaces the phosphodiester linker at 5’ position of the 2’-oxa-3’-aza-4’a-carbanucleoside. However, in order to maintain the six-bond periodicity of the oligonucleotides and thus the flexibility of the oligonucleotide chain the methylene bridge at the pseudo-5’-position was retained. The obtained compounds have shown to be endowed with an interesting antitumor activity: most of them inhibit cell proliferation of Vero, BS-C-1, HEp-2, MDCK, and HFF cells by 50% (CC50) at concentrations in the range of 5.0–40.0 μM. No antiviral activity against both RNA and DNA viruses was observed.

The synthetic route to 5’-triazolyl-2’-oxa-3’-aza-4’a-carbanucleosides 13 and 14 is described in Scheme 1 (and Table 1). (3′RS,5′SR)-2′-N-methyl-3′-hydroxymethyl-1′,2′-isoxazolidin-5′-ylthymine 8, obtained as the main compound, in a two-step process, by 1,3-dipolar cycloaddition of vinyl acetate to C-[(tert-butyldiphenylsilyl)oxy]-N-methylnitrone, followed by Hilbert–Jones nucleosidation using silylated thymine and TBAF [42-44], was converted into the corresponding iodo-derivative 10 by sequential tosylation and iodination.

The subsequent reaction of 10 with sodium azide, performed at 50 °C in CH3CN/H2O (1:10) in the presence of NH4Cl for 48 h afforded two azides, 11 and 12, epimeric at C-5, in a relative ratio 2:1 with a global yield of 85%. Two azides were separated by flash chromatography (CH2Cl2/MeOH 98:2 as eluent). Compound 12 originates from 11: its formation can be rationalized by considering that the acidic medium of the reaction, linked to the presence of NH4Cl, promotes an equilibrium process which starts from 11 and leads to a mixture of α- and β-anomers, via the intermediate oxonium ion 15 (path a) or 16 (path b) (Figure 3). As reported in similar systems [45], in the equilibrium mixture the β-anomer 11, thermodynamically more stable, predominates.

5’-Azido-2’-oxa-3’-aza-4’a-carbanucleosides 11 and 12 were independently engaged in a CuI-catalyzed Huisgen [3 + 2] cycloaddition reaction with a series of substituted alkynes 17, according to the procedure described by Sharpless [46] (Scheme 1 and Table 1). The click chemistry process, carried out with equimolar amounts of the respective dipolarophiles, afforded in all the cases the corresponding C-5’-triazolyl-2’-oxa-3’-aza-4’a-carbanucleosides 13 and 14 in good yields (79–89%). According to other copper-catalyzed azide–alkyne cycloadditions, no traces of 1,5-regioisomers were observed [47,48].

The antiproliferative effect of the obtained derivatives was tested on a panel of cell lines: african green monkey kidney cells (Vero and BS-C-1), human epidermoid carcinoma larynx cells (HEp-2), Madin–Darby canine kidney (MDCK), and human foreskin fibroblast cells (HFF). In these assays the cells were in the logarithmic phase of growth.

Inhibition of cell proliferation, with a CC50 ranging from 5 to 40 µM (Table 2), has been observed for all the new synthesized compounds. In particular, compound 14d showed a high level of inhibitory activity with CC50 values of 5 μM for all the utilized cell lines, while compounds 13c, 13e, 13d, 14c, 14e, 14f and 14g show the same CC50 values only for HFF cells.

Noteworthy, the relative cis, trans configuration of 13 and 14 does not seem to affect the biological effect. The cytostatic activity of the compounds was particularly exploited against HFF cell proliferation.

According to our initial hypothesis, the presence of the triazole linker at C-5’ position in the 2’-oxa-3’-aza-4’a-carbanucleoside skeleton induces a different biological effect with respect to 2’-oxa-3’-aza-4’a-carbanucleosides devoid of the triazole unit, such as compounds 2 and 8, which are endowed with antiviral activity, but do not show any cytotoxicity

Cell viability. The cytotoxicity of the tested compounds was evaluated by measuring the effect created on cell morphology and/or cell growth (cytostatic activity). Cell monolayers were prepared in 24-well tissue culture plates and exposed to various concentrations of the compounds. Cytotoxicity was recorded as morphological variations (such as rounding up, shrinking and detachment) at 24, 48, 72 and 96 h, using light microscopy. Cytotoxicity was expressed as the minimum cytotoxic concentration (MCC) that caused a microscopically detectable variation of cell morphology. The extent of cytostatic activity was measured as inhibition of cell growth using the MTT method, as previously described [49,50]. The 50% cytotoxic dose (CC50) is the compound concentration required to reduce cell proliferation by 50% relative to the absorbance of the untreated control. CC50 values were estimated from graphic plots of the percentage of control as a function of the concentration of the test compounds.

Test compounds. Compounds 13 and 14 were dissolved in DMSO and diluted in maintenance medium to achieve the final required concentration. The final dilution of test compounds contained a maximum concentration of 0.01% DMSO, which had no effect on the viability of the cell lines. Stock solutions of acycloguanosine (Sigma, USA) were prepared in distilled water, filtered through 0. 2 μm filter and stored at 4 °C until use.

Viruses. In the antiviral assays the following viruses were used: Poliovirus 1 (Sabin strain: VR-1562), Human echovirus 9 (VR-1050), Herpes simplex type 1 (HSV-1: VR-260), Coxsackievirus B1 (VR-28), adenovirus type 2 (VR-1080), Cytomegalovirus (CMV: VR-538), varicella-zoster virus (VZV: VR-1367), influenza virus A/Puerto Rico/8/34 H1N1 (PR8). Viruses were obtained from the American Type Culture Collection. The tests on the antiviral activity were carried out by the 50% plaque reduction assay or by 50% virus-induced cytopathogenicity, as previously described [51]. The concentration of the compound that inhibit the formation of viral plaques or virus-induced cytopathogenicity by 50% is expressed as EC50.

In summary, starting from 5’-azido-2’-oxa-3’-azanucleosides, a new series of C-5’-triazolyl-2’-oxo-3’-aza-4’a-carbanucleosides has been synthesized by using a CuI-catalyzed Huisgen [3 + 2] cycloaddition with substituted alkynes. The biological assays indicate that these compounds inhibit the cell proliferation of Vero, BS-C-1, HEp-2, MDCK, and HFF cells by 50% (CC50) at concentrations in the range of 5.0–40.0 μM. No antiviral activity at subtoxic concentrations was observed.

We gratefully acknowledge the Italian Ministry of Education, Universities, and Research (MIUR), the Universities of Messina and Catania, and the Interuniversity Consortium for Innovative Methodologies and Processes for Synthesis (CINMPIS) for partial financial support.

© 2015 Romeo et al; licensee Beilstein-Institut.
This is an Open Access article under the terms of the Creative Commons Attribution License (http://creativecommons.org/licenses/by/2.0), which permits unrestricted use, distribution, and reproduction in any medium, provided the original work is properly cited.
The license is subject to the Beilstein Journal of Organic Chemistry terms and conditions: (http://www.beilstein-journals.org/bjoc) 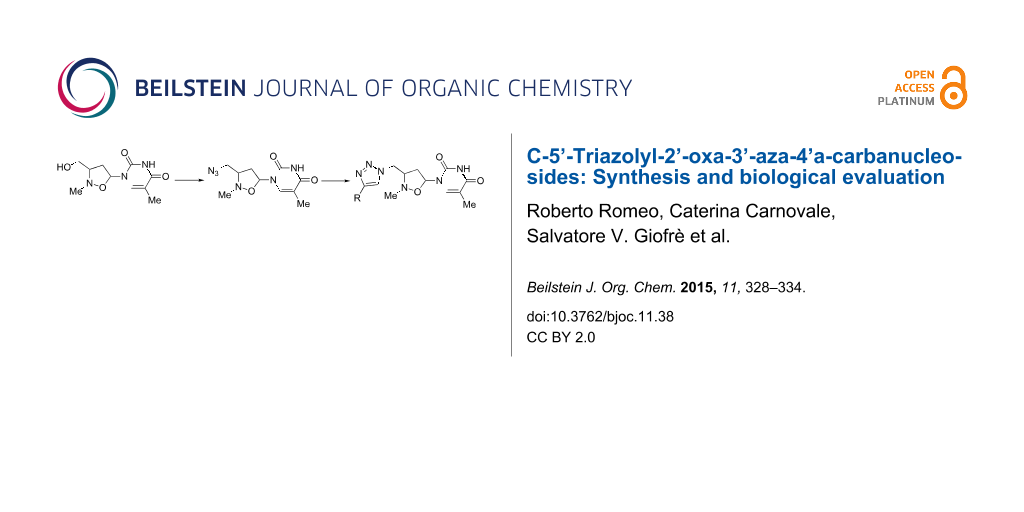