All articles from this author
Doreen Mollenhauer


All articles from this author
Beate Paulus

The Gibbs energies of association (Gibbs free (binding) energies) for divalent crown-8/ammonium pseudorotaxanes are determined by investigating the influence of different linkers onto the binding. Calculations are performed with density functional theory including dispersion corrections. The translational, rotational and vibrational contributions are taken into account and solvation effects including counter ions are investigated by applying the COSMO-RS method, which is based on a continuum solvation model. The calculated energies agree well with the experimentally determined ones. The shortest investigated linker shows an enhanced binding strength due to electronic effects, namely the dispersion interaction between the linkers from the guest and the host. For the longer linkers this ideal packing is not possible due to steric hindrance.

If two or more binding sites of a molecular system are involved in the association process, the interaction energy can be significantly increased compared to the sum of the individual binding energies. This effect is called multivalency [1] and is mainly observed in biochemical systems [2-9]. But the concept of multivalency can be transferred to supramolecular assemblies with suitable building blocks [10-12] including (pseudo)rotaxanes [13-15] as well. One common building block for pseudorotaxanes is the crown/ammonium binding motif. In this motif ammonium can bind on top of small crown ethers, e.g., crown-6, or can pass through larger crown ethers, e.g., crown-8. Jiang et al. [16] have investigated the assembly thermodynamics and kinetics of divalent crown-8/ammonium pseudorotaxanes with different linkers. The shortest linker shows a much larger chelate cooperativity than the longer linkers due to non-innocent linkers that contribute to the binding. To analyze the individual contributions to the binding, we perform first principle calculations of the model system shown in Figure 1, which is strongly related to the experimentally investigated systems of Jiang et al. [16]. The only difference is that 1,4-diazanaphthalene groups of the host molecule are replaced by phenyl groups and the side chains of the anthracene bridge in the divalent host are neglected. In addition to the electronic contributions, enthalpic and entropic temperature effects as well as solvent effects are included in our simulations in order to compare to experimentally obtained Gibbs energy of association.

In order to investigate the cooperativity effects of the binding between divalent host molecules and divalent guest molecules it is important to firstly describe the monovalent binding motif computationally as accurately as possible and to understand the underlying effects that contribute to the binding. Three major terms have to be considered in the evaluation of the Gibbs energy of association ΔG to model the reaction in solution at finite temperature with reasonable accuracy. 1) The electronic association energy ΔE is calculated [17] with the DFT functional TPSS-D3(BJ) [18-20] and the basis set def2-TZVP [21,22]. A comparison with the electronic association energy determined with the DF-LCCSD(T) method [23,24] at the extrapolated basis set limit shows good agreement (see Table 1). Already the DF-LCCSD(T) with the cc-pVTZ basis set deviates only by 5% from the TPSS-D3(BJ) value, whereas the basis set extrapolated value is more or less equivalent to the TPSS-D3(BJ) value (deviation less than 0.3%). This very good agreement is somewhat fortunate, because a basis set extrapolation with DZ and TZ is only accurate to within a few percent. Additionally, the possible errors of the functional and the dispersion correction can also be in the range of 10% for the system under investigation. A more detailed analysis of the accuracy of the TPSS-D3(BJ) functional has been performed for the crown-6/ammonium complex in [25]. Another point to remark is that even for the monovalent system about 36% of the electronic interaction energy is due to the dispersion correction. 2) The finite temperature effects from translation, rotation and vibration are calculated with an approach from Grimme [26], which partially treats the low-lying vibrations as hindered rotations (TPSS-D3(BJ)/def2-SVP [22,27] for vibrations). 3) The influence of the solvent for the association process in solution is derived from the difference of the solvation effects of the product and the reagents, calculated with COSMO-RS [28,29]. For the COSMO-RS (BP_TZVP_C30_1301.ctd parameterization) calculation all structures have been optimized in an ideal conductor [30] and in vacuum with BP86/def-TZVP [31-34]. This procedure yields very good results for the Gibbs energy of association in the case of the crown-6/ammonium complex in comparison with experiment [25]. For the simulations of the crown-8/ammonium systems the same solvent as in the experiment [16] is used, namely a 2.2:1 mixture of chloroform/acetonitrile. The influence of the counter ion PF6− onto the Gibbs energy of association is taken into account explicitly.

aΔE calculated at TPSS-D3(BJ)/def2-TZVP level of theory is not identical to the one in Table 2, because there another conformer (a slightly more stable one) is used. The Ph@C8* structure has been optimized with TPSS-D3(BJ)/def2-TZVP. For the other methods only single point calculations are done.

The divalent host molecules consist of two crown-8 ethers that are linked by an anthracene bridge. For the divalent guest molecule different flexible linkers, namely –O(CH2)2O– (n0), –O(CH2)3O– (n1) and –O(CH2)4O– (n2) have been investigated both experimentally in [16] and computationally. The results for the electronic association energy ΔE, the Gibbs energy of association ΔG in the gas phase and its enthalpic (ΔH) and entropic (−TΔS) contributions are given in Table 2. Comparing the electronic association energy for the n0 guest in the divalent case with the doubled value of the monovalent (Ph@C8) system, an electronic cooperativity effect of 9.7 kJ/mol is discovered. When the linker length is increased, this electronic cooperativity effect is lost, and a lower electronic association energy (by 11.3 kJ/mol) is discovered for the divalent system with the n1 linker compared to two monovalent systems. For the longer n2 linker the electronic association energy is even lower by 24.2 kJ/mol for the divalent system compared to two monovalent systems. This is mainly due to the dispersive interaction of the linking unit (two phenyl rings and the linker), which in case of the n0 guest fits perfectly on top of the anthracene linker of the DiC8 host. The distance between the linker of the host and the linker of the n0 guest is around 3.7 Å, quite close to an ideal distance for the π–π stacking of two benzene rings. The n1 and n2 guest do not perfectly fit with the host (Figure 2). In the n1-case the linker is folded away from the anthracene bridge, and for the n2-case one phenyl ring is twisted away due to steric constraints.

aThe enthalpic (ΔH) and entropic (−TΔS) contribution to ΔG are given. The ΔH contribution resulting from finite temperatures is given in brackets.

The Gibbs energy of association ΔG in the gas phase of the divalent systems (Table 2) result in the same trend as observed for the electronic association energy ΔE, because the enthalpic (ΔH) and entropic (−TΔS) contributions are similar for n0@DiC8, n1@DiC8 and n2@DiC8.

aElectronic association energy ΔE, Gibbs energy of association ΔG in gas phase and in solution, in the latter case with and without inclusion of the counter ion PF6−, and experimentally determined ΔG for monovalent and divalent pseudorotaxanes in a 2.2:1 solvent mixture of chloroform/acetonitrile at room temperature (T = 298.15 K) are presented.

aThe effects of the counter ion PF6− are included in the calculation. #K declares the equilibrium constant K with regard to Equation 1 and Figure 3.

Regarding the aforementioned deviations from experiment, the difference in the absolute Gibbs energies of association can be explained by the insufficient modeling of solvent effects. The solvent model assumes a uniform distribution of the two different solvents in the mixture. An explicit treatment of at least some solvent molecules would be desirable but is computationally not feasible at the required quantum mechanical level. A combined molecular mechanics/quantum mechanics treatment could be a solution to this problem in the future. Nevertheless, concerning the difference between ΔG in the gas phase and the experimental value, the solvent model that is used in this study yields a significant part of ΔG, but it cannot resolve details of the solvation effects.

The Gibbs energies of association, including enthalpic and entropic temperature effects, solvent effects and the counter ions, have been determined for the divalent crown-8/ammonium pseudorotaxane with different linkers in the guest molecule. Additionally, a full double mutant cycle has been investigated in the same way. Our results agree with the experimental findings that the shortest investigated linker yields a strongly enhanced binding compared to the monovalent case due to the binding of the guest linker to the host linker. Our first principle calculations show clearly that this enhanced binding is due to electronic effects, namely the dispersion interaction of the two linkers. For the shortest linker this interaction results in a nearly ideal π–π stacking. For the two longer linkers ideal packing is not possible due to steric hindrance. These investigations proved that besides the primary binding sites in multivalent arrangements the interaction of the linkers can influence the binding process significantly. Therefore the term of non-innocent linkers introduced in [16] is well justified.

Support by the German Research Foundation (DFG) through the Collaborative Research Center (CRC) 765 'Multivalency as chemical organization and action principle: new architectures, functions and applications' and the High-Performance Computing facilities of the Freie Universität Berlin (ZEDAT) is acknowledged.

Towards the sequence-specific multivalent molecular recognition of cyclodextrin oligomers

© 2015 Achazi et al; licensee Beilstein-Institut.
This is an Open Access article under the terms of the Creative Commons Attribution License (http://creativecommons.org/licenses/by/2.0), which permits unrestricted use, distribution, and reproduction in any medium, provided the original work is properly cited.
The license is subject to the Beilstein Journal of Organic Chemistry terms and conditions: (http://www.beilstein-journals.org/bjoc) 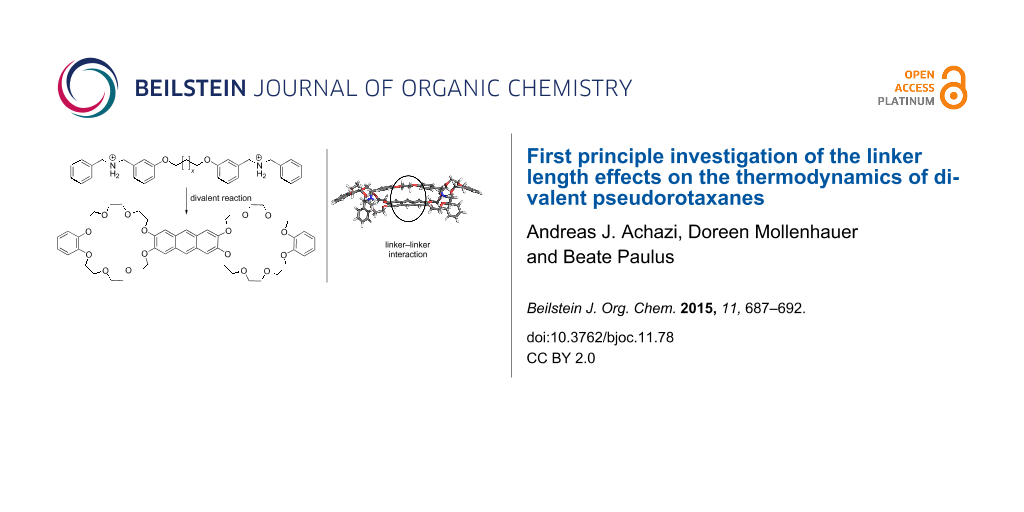