Synthesis and reactivity of aliphatic sulfur pentafluorides from substituted (pentafluorosulfanyl)benzenes


All articles from this author
Jiří Václavík

Fluorinated organic compounds have been one of the foci of chemical industry for the last several decades. The unique properties of fluorine atoms and fluorinated groups have been exploited in various applications ranging from advanced materials to bioactive compounds [1-3]. One such fluorinated functional group which has become the focus of systematic investigation only recently is the pentafluorosulfanyl (SF5) group [4,5]. The combination of high stability [6], lipophilicity [7] and strong electron-withdrawing character [8] – similar to but more extreme than the trifluoromethyl group – makes SF5 compounds promising candidates for agrochemicals and pharmaceuticals [9]. Recent studies showed several cases where SF5 analogues of established compounds showed improved potency [10-12]. Limiting factors for a more widespread use of SF5 compounds are low accessibility of basic building blocks and the lack of understanding of their chemical behavior. Lack of availability of SF5 compounds is particularly evident in aliphatics where radical addition of expensive and toxic SF5Cl to unsaturated compounds is practically the only synthetic option currently available [13,14]. We have recently described an alternative route to access SF5 aliphatic compounds, based on oxidation of much more readily available aromatic ones [15]. One of the methods we developed was based on the oxidation of 4-(pentafluorosulfanyl)anisole (1) or 4-(pentafluorosulfanyl)phenol (2) by a mixture of aqueous hydrogen peroxide and concentrated sulfuric acid (Scheme 1). The major product was muconolactone 3 while maleic acid 4 and succinic acid 5 were formed in small amounts. Herein we report a full account of this oxidation, alternative syntheses of maleic acid 4, and the results of chemical reactivity studies of acids 3 and 4.

The proposed mechanism for the oxidation of 1 and 2 to SF5-containg products is shown in Scheme 2 [15]. The muconolactone derivative 3 is most probably the product of a series of transformations: electrophilic aromatic hydroxylation to the intermediate 6, oxidation to ortho-benzoquinone 7, Baeyer–Villiger (BV) oxidation, hydrolysis to muconic acid derivative 8, and finally intramolecular conjugate addition affording 3. Under certain conditions, small amounts of intermediates 6 and 8 were detected [15]. Interestingly, this reaction sequence is essentially identical to the aerobic microbial degradation of aromatic compounds, which involves hydroxylating oxygenase and ring-cleaving dioxygenase enzymes [16-19]. This sequence of reactions however, does not account for the presence of maleic acid derivative 4 in the product mixture. Control experiments in which 8 or 3 were reacted with H2O2/H2SO4 did not provide 4. This suggests that 4 may be formed by a second hydroxylation of 6 to 9. The second electrophilic aromatic hydroxylation is a favorable process because 6 is a more activated substrate than 1 or 2. Oxidation, BV oxidation and hydrolysis would afford the diacid 4 (Scheme 2). Succinic acid derivative 5 is another minor product and a control experiment showed that it was formed from 3. Mechanistic considerations of this process will be discussed later.

We hypothesized that the yield of 4 might be increased when starting from 3-(pentafluorosulfanyl)anisole (10) or 3-(pentafluorosulfanyl)phenol (11). In these substrates, the first hydroxylation is likely to occur in the para position to the methoxy or hydroxy groups facilitating the formation of the para-benzoquinone derivative 12. To test this hypothesis, both 10 and 11 were subjected to oxidation by H2O2/H2SO4 mixture. Indeed, the yield of 3 decreased considerably while the yield of 4 increased somewhat but still remains low (Scheme 3).

The presumed intermediate 2-(pentafluorosulfanyl)-1,4-benzoquinone (12) in the pathway toward 4 was prepared independently (Scheme 4). Azo coupling [20] of phenol 11 with a diazonium salt prepared from sulfanilic acid afforded red azo product 13. The regioselectivity is governed by the strong para-directing hydroxy group despite the presence of the bulky SF5 group. Compounds with substituents ortho to the SF5 group are relatively uncommon [21]. Reduction with sodium dithionite [20] provided aminophenol 14 in good overall yield and oxidation with MnO2 [22] gave benzoquinone 12 also in a good yield. Further oxidation with H2O2/H2SO4 resulted in a mixture of four SF5-containing products. Maleic acid 4 was identified in the mixture (25% 19F NMR yield, Scheme 4) but chromatographic separation, crystallization or derivatization (CH2N2) attempts were not successful. Nevertheless, these results show that SF5-substituted para-benzoquinones are most likely intermediates in the formation of 4 by oxidation of aromatics.

Benzoquinone 12 is a solid material with good stability at −20 °C. Several standard reactions were investigated. Reduction to hydroquinone 15 using catalytic palladium was very efficient (Scheme 5). The Diels–Alder reaction with cyclopentadiene proceeded in a high yield at ambient temperature with exclusive regiochemistry on the less substituted double bond of 12 and complete endo stereochemistry (Scheme 5).

Employing density functional theory (DFT) with the B3LYP functional [23] and the aug-cc-pVDZ basis set [24,25], we calculated the reaction coordinates leading to four possible Diels–Alder products (Table 1). Single-point energies of the transition states suggested that pathway a was preferred over b (difference of ca. 10–20 kJ/mol). This was further supported by comparison of Gibbs free energy values. Boltzmann distribution was used to calculate theoretical endo/exo selectivity of 16a (98:2) from the differences of Gibbs energy of the transition states.

Geometries of the four transition states are depicted in Figure 1. The less abundant transition states (TS-endo-16b and TS-exo-16b) were asynchronous with the differences of bond lengths of 0.662 and 0.556 Å, respectively. Structures TS-endo-16a and TS-exo-16a also displayed a certain degree of asynchronicity with the bond length differences of 0.085 and 0.081 Å. The striking difference is probably caused by the steric demand of the SF5 group.

The chemical behavior of muconolactone 3 was investigated next. This compound showed good stability at ambient temperature in a strongly acidic and oxidizing environment. However, lactone 3 was found to be unstable in water or in aqueous base. Monitoring a solution of 3 in D2O by 1H and 19F NMR spectroscopy showed a gradual disappearance of the SF5 signal. After 55 h at ambient temperature two sets of signals appeared in the 1H NMR spectrum; their integrals and coupling patterns suggested the presence of two structures of 17 in a 59:41 ratio. In DMSO-d6 only the enol form of 17 was observed. Decomposition of 3 is much faster in the presence of sodium bicarbonate. In a preparative experiment, 3 was dissolved in water and after 40 h at ambient temperature acid 17 was isolated in 60% yield confirming that 3 undergoes addition of water and elimination of HF and SF4 (Scheme 6). Nucleophile-induced elimination of SF5 groups in β-position of an electron-withdrawing group has been described [27].

As already mentioned, compound 3 is much more stable in acidic than in neutral or basic aqueous medium. To investigate its reactivity in acids under various conditions, several screening experiments were carried out. In HCl (5 M), H2SO4 (5 M or 10 M) or 85% H3PO4 at ambient temperature the lactone 3 remained unaffected. At 80 °C the formation of levulinic acid derivative 18 was observed together with unidentified byproducts. Under elevated temperature (100 °C and above) the product of HF and SF4 elimination, (E)-4-oxopent-2-enoic acid (19) [28] formed (Scheme 7). In a preparative experiment using 85% H3PO4 at 100 °C, levulinic acid 18 was obtained in 14% yield. This result allowed us to propose that byproduct 5 observed during oxidation of SF5-anisoles and phenols could be formed from open-chain acids according to Scheme 7.

Despite the lack of efficient synthetic protocols toward maleic acid 4, some basic chemical reactivity studies were performed. When heated to about 125 °C under reduced pressure, acid 4 eliminated water to afford anhydride 20 in a good yield. Anhydride 20 underwent a Diels–Alder reaction with cyclopentadiene at ambient temperature to provide a mixture of endo and exo products in an 8:1 ratio (Scheme 8). In comparison, it is known that maleic anhydride in analogous reactions affords exclusively the endo adduct [29].

Attempts to facilitate the isolation of very polar maleic acid 4 from the reaction mixture by derivatization to dimethyl ester using diazomethane were not successful. The dimethyl maleate derivative was formed but was accompanied by the [3 + 2] cycloaddition product 22. With excess of diazomethane, clean and efficient formation of 22 was observed (Scheme 9).

Acid 4 was stable in water, methanol, isopropylalcohol, boiling benzene, or boiling aqueous sodium carbonate. However, it underwent decarboxylation in DMSO-d6. Monitoring by NMR showed decarboxylation even at room temperature. After 90 h at ambient temperature the starting compound 4 disappeared and 3-(pentafluorosulfanyl)prop-2-enoic acid (23) was formed. At 65 °C the starting material was no longer present after 1.5 h and the NMR yield of the acrylic acid derivative 23 was 60% (Scheme 10). Acrylic acid 23 was prepared previously by the addition of SF5Cl to allyl alcohol and subsequent elimination and oxidation [30]. We proposed that the decarboxylation reaction could be used for the synthesis of selectively deuterium labelled acrylic acid derivative 23. Indeed, when maleic acid 4 was evaporated twice with D2O to exchange acidic protons and heated in DMSO-d6, deuterated 23 was observed by NMR spectroscopy (Scheme 10).

In conclusion, similar to 4-(pentafluorosulfanyl)anisole and 4-(pentafluorosulfanyl)phenol the meta-derivatives 10 and 11 underwent oxidation with aqueous hydrogen peroxide in sulfuric acid to provide SF5-muconolactone and SF5-maleic acid as main products. Improved conversion of SF5-maleic acid was rationalized by preferential formation of SF5-substituted para-benzoquinone as an intermediate. This benzoquinone was independently prepared and its transformation to the maleic acid derivative by oxidation was verified. Reactions of SF5-maleinanhydride (formed by dehydration of SF5-maleic acid) and SF5-benzoquinone with cyclopentadiene provided the Diels–Alder adducts in good to excellent yields; the observed stereoselectivity of the latter reaction agreed with DFT calculations. SF5-muconolactone was found to be relatively stable in acidic media but eliminates the SF5 group in water or in aqueous base to form 2-(3,5-dioxotetrahydrofuran-2-yl)acetic acid, which in aqueous solution exists in equilibrium with its enol form. Further experiments are underway to find out whether aerobic microbial degradation of SF5-substituted aromatic compounds follows the same pathway as our chemical oxidation method.

Synthesis and characterization of all new products, copies of 1H, 13C, and 19F NMR spectra of newly synthesized products, and computational data.

This work was supported by the Academy of Sciences of the Czech Republic (Research Plan RVO: 61388963).

© 2016 Vida et al; licensee Beilstein-Institut.
This is an Open Access article under the terms of the Creative Commons Attribution License (http://creativecommons.org/licenses/by/2.0), which permits unrestricted use, distribution, and reproduction in any medium, provided the original work is properly cited.
The license is subject to the Beilstein Journal of Organic Chemistry terms and conditions: (http://www.beilstein-journals.org/bjoc) 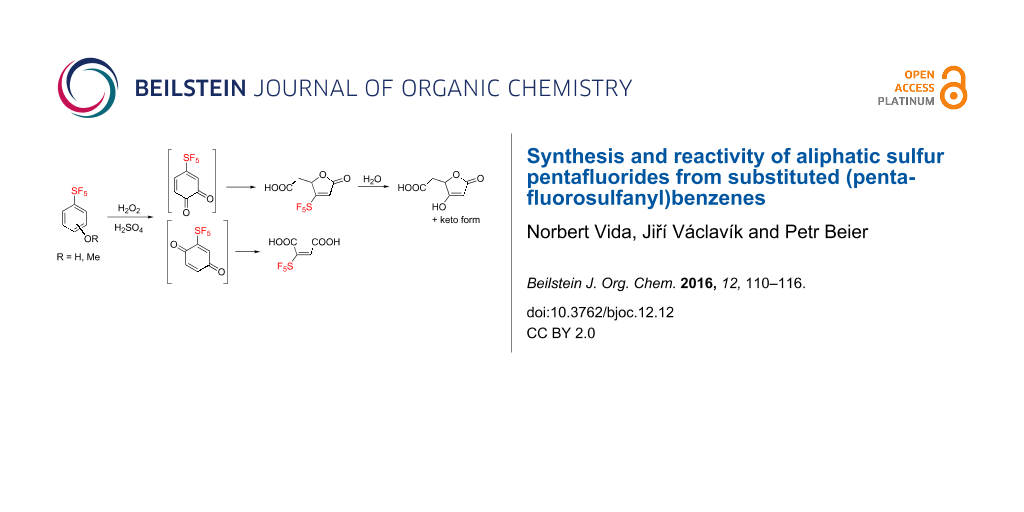