All articles from this author
Peile Du


All articles from this author
Jianjun Li


All articles from this author
Ziyang Liao


All articles from this author
Guohua Liu


All articles from this author
Hao Li


All articles from this author
Wei Wang

The power of “donor–acceptor” (D–A) cyclopropanes as versatile 1,3-dipolar components is fuelled by its capacity of serving a complementary approach to a wide array of 5-membered ring structures, which are difficult or impossible to access by classic [3 + 2] cycloaddition reactions [1-34]. In recent years, significant efforts have been devoted to developing a catalytic enantioselective version of the processes. In this context, the D–A cyclopropanes have been applied for the reaction with highly active dipolarophiles, such as electrophilic C=O [35], e.g., aldehydes [36-38], ketones [38,39], and imines [40], and nucleophilic enol ethers [38,41], enamides [42], and indoles [43]. Nonetheless, the reactions with the α,β-unsaturated aldehydes and ketones face important challenges. To the best of our knowledge, so far merely two catalyst manifolds have been realized to effect the transformations with C=C double bonds instead of C=O in the α,β-unsaturated systems. Tsuji described the first organometallic promoted non-asymmetric reaction between D–A cyclopropanes and methyl vinyl ketone and α,β-unsaturated esters [44]. Trost and co-workers orchestrated the only example of the enantioselective reaction of D–A cyclopropanes with C=C double bonds with Meldrum’s acid and alkylidenes or azlactone alkylidenes, catalyzed by the chiral Trost Pd(0)-complexes [45]. However, it is difficult to apply the catalytic system for the regio-controlled reaction with C=C bonds in α,β-unsaturated carbonyl compounds, particularly enals. The highly active aldehyde functionality reacts more favorably with the D–A cyclopropane resulting 1,3-dipoles, as elegantly demonstrated by Johnson and Waser for the formation of chiral tetrahydrofurans (Scheme 1, reaction 1) [36,38]. Achieving a regioselective control at the C=C bond rather than at C=O in enals represents a challenge and has not been reported.

To render the [3 + 2] annulation reaction to selectively act on the C=C double bond rather than on the aldehyde in enals 1, we proposed a new cooperative iminium and Lewis acid (LA) catalysis strategy (Scheme 1, reaction 2) [49,50,57-76]. The iminium catalysis plays an important dual role in the process. The formed iminium ion 4 derived from aldehyde 1 and an amine catalyst activates the C=C bond and sterically blocks the attack of the C=N iminium ion functionality posed by the bulky amine catalyst. In parallel, a LA promotes to open the D–A cyclopropanes 2. The cooperative activation of two independent substrates by respective iminium and Lewis acid catalysis may enable an unprecedented catalytic regio- and enantioselective [3 + 2] annulation process, which offers a new approach to synthetically important heavily functionalized chiral cyclopentane structures 3, bearing at least 3 stereogenic centers in this one-pot operation [77,78].

To test the feasibility of the designed [3 + 2] annulation process [79-94], we started our investigation by carrying out the reaction between the commonly used D–A system dimethyl 2-vinylcyclopropane-1,1-dicarboxylate (1a) and trans-cinnamaldehyde (2a) catalyzed in the presence of a LA and chiral amine I in CH2Cl2 at rt for 48 h (Table 1). A series of Lewis acids were initially screened. FeCl3 and Cu(OTf)2 gave the 1,2-cycloaddition product tetrahydrofuran 4a (Table 1, entries 1 and 2). It is also disappointing that others Lewis acids, such as CuCl2, MgI2, ZnBr2, ZnCl2 and FeCl2 failed to promote these processes (Table 1, entries 3–7). Inspired by Trost’s work of Pd(0)-catalyzed annulations of D–A cyclopropanes with C=C double bonds with Meldrum’s acid and alkylidenes or azlactone alkylidenes [45], we probed the Pd2(dba)3-dppe complex for the 1,4-addition cycloaddition reaction (Table 1, entry 8). It was found that the reaction took place to afford the desired cyclopentane 3a.

We then selected the use of co-catalysts of Pd2(dba)3 and organocatalyst I in CHCl3 at room temperature to evaluate the generality of this [3 + 2] annulation process by the variation of vinylcyclopropanes and enals (Table 3). The results exhibit that the synergistic catalyzed enantioselective [3 + 2] annulation process serves as a general approach to structurally chiral cyclopentanes bearing 3-consecutive stereogenic centers with high regio- and enantioselectivities. It was found that a wide range of aromatic α,β-unsaturated aldehydes can effectively participate in the process (Table 3, entries 1–12). The aromatic α,β-unsaturated aldehydes tethering electron-neutral, -withdrawing, and -donating substituents at the para-position of the phenyl ring gave good to high yields and excellent enantioselectivities for major isomer 3’ and minor 3’’’ products, while the electronic effect on enantioselectivity is more pronounced for minor 3’’ (Table 3, entries 1–5). A similar trend is observed with the aromatic α,β-unsaturated aldehydes with electron-withdrawing at meta-position (Table 3, entries 6 and 7). Those with electron-withdrawing, and -donating groups at ortho-position furnished excellent enantioselectivities for both 3’ and 3’’ products in cases studied (Table 3, entries 8–11). Moreover, the heteroaromatic furanyl α,β-unsaturated aldehyde 2l can also be tolerated with good yield and 97% ee for the major product (Table 3, entry 12). More significantly, the more steric demanding D–A cyclopropane bearing a phenyl ring instead of H can effectively participate in the process to deliver the desired product with achieving an excellent level of enantioselectivity albeit a relatively low yield (Table 3, 46%, entry 13). It is noteworthy that although aliphatic enals also can engage in this [3 + 2] annulation reaction. Unfortunately, we could not separate them on chiral HPLC column for the determination of the enantioselectivity by all means we have attempted (data not shown).

We proposed two possible transition states (TS) 8a’ and 8a” to rationalize the observed configurations (Scheme 3). The trans-C=C double bond in iminium ion 4 dictates the R group at pseudo axial position in the cyclic 5-membered ring TS 8a’ and 8a”. This orientation avoids the A[1,3] strain induced by the catalyst-derived enamine. The Pd(II)-π3 complex moiety at pseudo axial and equatorial positions leads to respective TS 8a’ and 8a”, while 8a’ is more stable due to the minimization of the A[1,3] interaction. Therefore, it is observed 3a’ produced from corresponding 8a’ as the major diastereomer whereas 3a” as minor one.

We have developed a cooperative catalytic strategy for highly regio- and enantioselective [3 + 2] cycloaddition reactions of vinylcyclopropanes with α,β-unsaturated aldehydes for the first time. The combination of a chiral iminium catalyst, which activates the C=C bond and blocks the C=O bond in enals, and a Lewis acid promoting to open the vinylcyclopropanes enables the annulation process to proceed with the challenging C=C bond. A high level of enantioselectivity could be achieved here. This previously unattainable [3 + 2] annulation transformation serves as a general approach to the preparation of new densely functionalized chiral cyclopentanes. This synergistic catalysis strategy holds great potentials for further exploration of new cycloaddition reactions involving enals and other D–A systems. The endeavor is being pursued in our laboratories.

General procedure for the [3 + 2] annulation

Financial support of this research from the program for Professor of Special Appointment (Eastern Scholar) at Shanghai Institutions of Higher Learning (No. 201226, H. L.), the National Science Foundation of China (No. 21372073, W. W.), the Fundamental Research Funds for the Central Universities and East China University of Science and Technology (start-up funds, H. L. and W. W.), and the China 111 Project (Grant B07023, H. L. and W.W.) is gratefully acknowledged.

© 2016 Zhu et al.; licensee Beilstein-Institut.
This is an Open Access article under the terms of the Creative Commons Attribution License (http://creativecommons.org/licenses/by/2.0), which permits unrestricted use, distribution, and reproduction in any medium, provided the original work is properly cited.
The license is subject to the Beilstein Journal of Organic Chemistry terms and conditions: (http://www.beilstein-journals.org/bjoc) 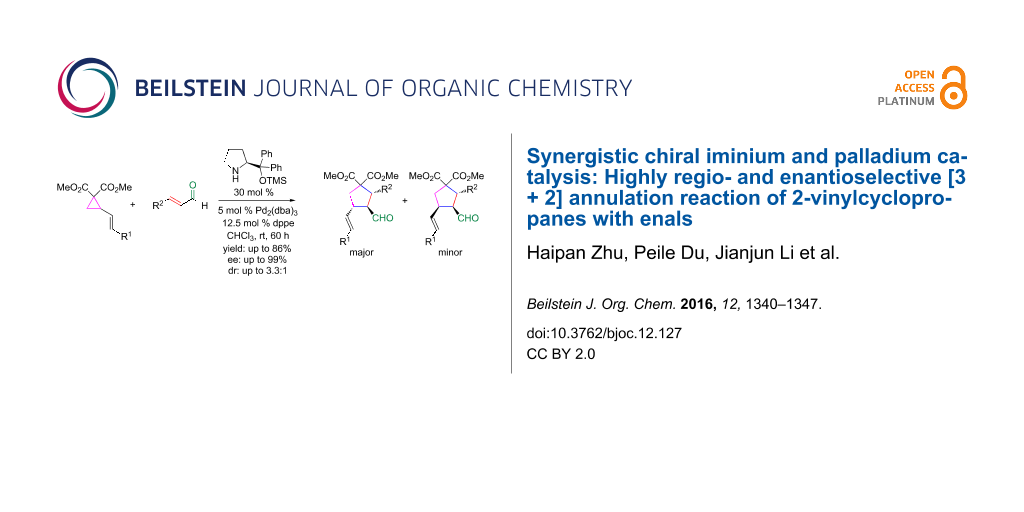